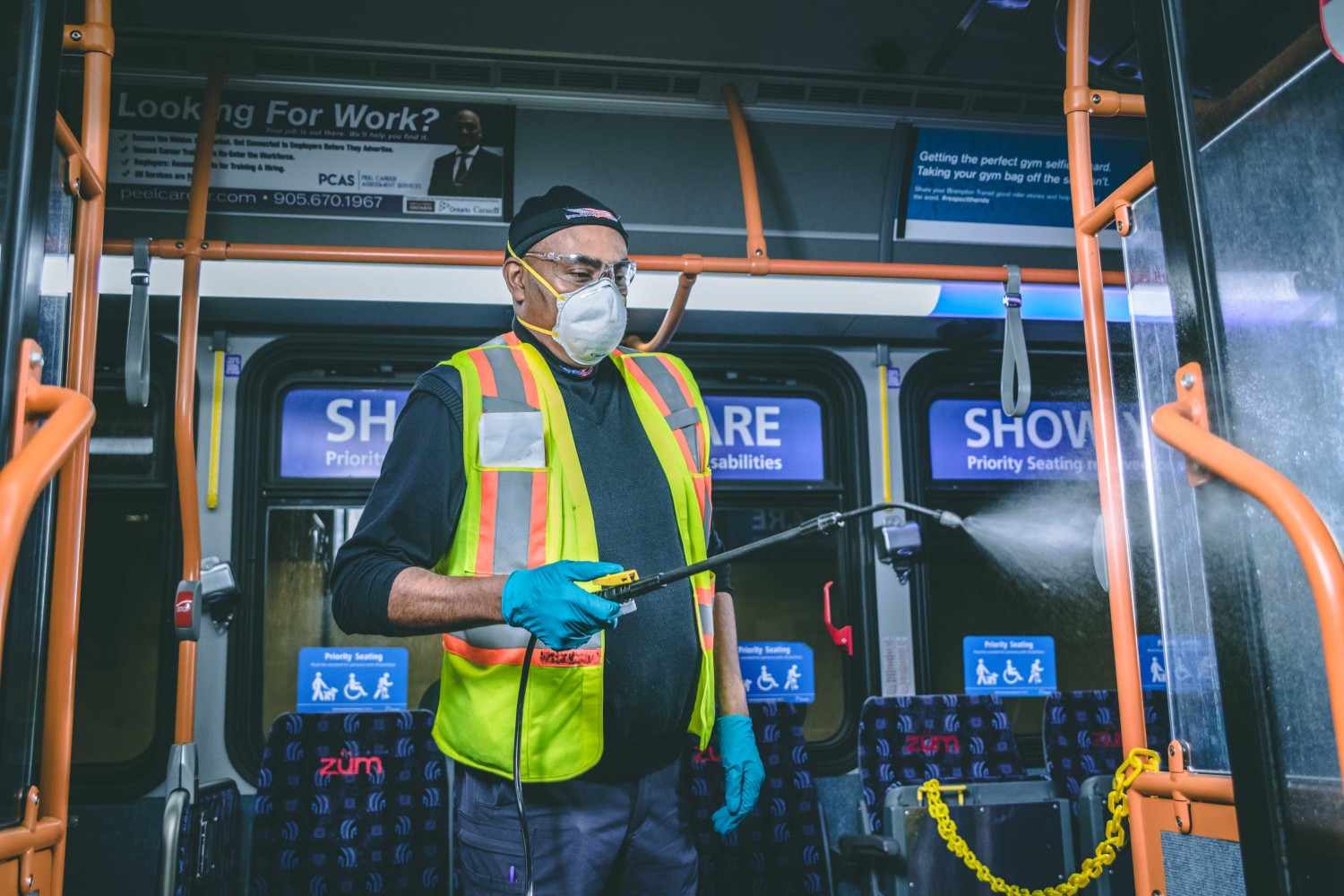 The City of Mississauga, Peel’s most populous municipality, continues to see the highest number of cases with 33 additional infections confirmed Saturday, bringing its total to 474. The City of Brampton saw 21 more cases confirmed, for a total of 373 infections. The region registered no additional deaths as a result of COVID-19, leaving the total at 15, and four cases are still pending further information. It’s unclear how many of the confirmed infections across Peel are now resolved. 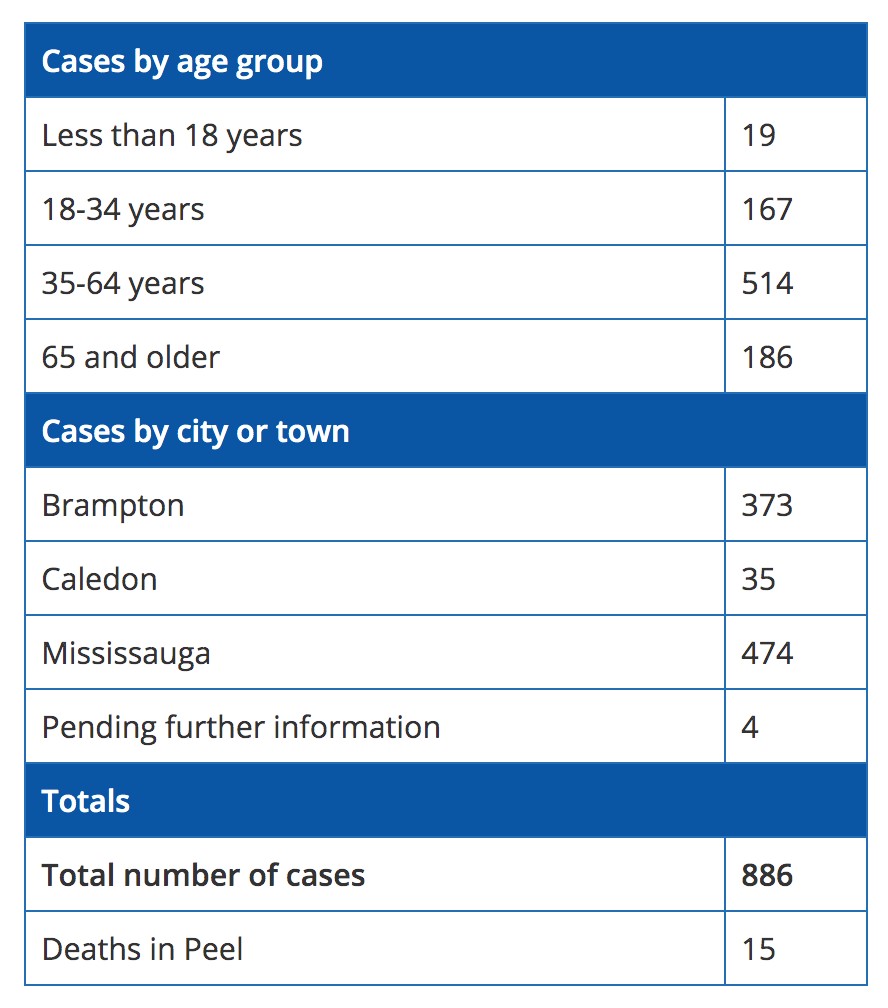 With the 329 cases reported since Monday, the virus is almost as prevalent across the region as it is in the country’s largest city, with Toronto at 6.3 cases of COVID-19 per 10,000 residents and Peel at 5.9, while Mississauga has the exact same per capita rate as its larger neighbour.

As numbers across the province continue to rise — Ontario saw 411 new cases confirmed Friday, bringing its total to 6,648 and 253 deaths — Premier Doug Ford announced Saturday morning that the emergency measures put in place, including the closure of many businesses deemed “non-essential” and the shuttering of outdoor amenities, would continue until at least April 23.

It’s not a surprising move as public health officials have made clear that strict social and physical distancing measures will need to be in place for months.

This week, Prime Minister Justin Trudeau said he doesn’t see things returning back to normal until a vaccine is developed for COVID-19, something that could take between 12 and 18 months. However, strict measures put in place could be relaxed if infection numbers begin to decline. The main concern is if measures are relaxed too early, a second major wave of infection could restart the entire closure and physical distancing process.

"I understand the actions we are taking are affecting the lives and livelihoods of people across the province, but these are extraordinary times and we need to do whatever we can to keep individuals and families safe and stop the spread of this terrible virus," Premier Ford said in a news release. "We all must continue to do our part by staying home and practicing physical distancing. With the proper precautions and additional measures we're taking today, I am confident we will get through this together and stronger."

The province also introduced a number of new measures to assist hospitals in the event they experience capacity problems from a surge in COVID-19 cases.

Both William Osler, which runs Brampton’s two hospitals including Civic (the only full-service facility where COVID-19 patients are being treated in the city) and Trillium, which runs Mississauga’s two hospitals, have set up temporary structures to alleviate pressure.

At Trillium’s Mississauga Hospital, a large temporary structure housing a complete ward was set up this week to treat COVID-19 patients, adding a further 80 beds, while Osler’s tent at Civic Hospital is only designated for additional emergency department intake space if needed and cannot be used to treat patients. 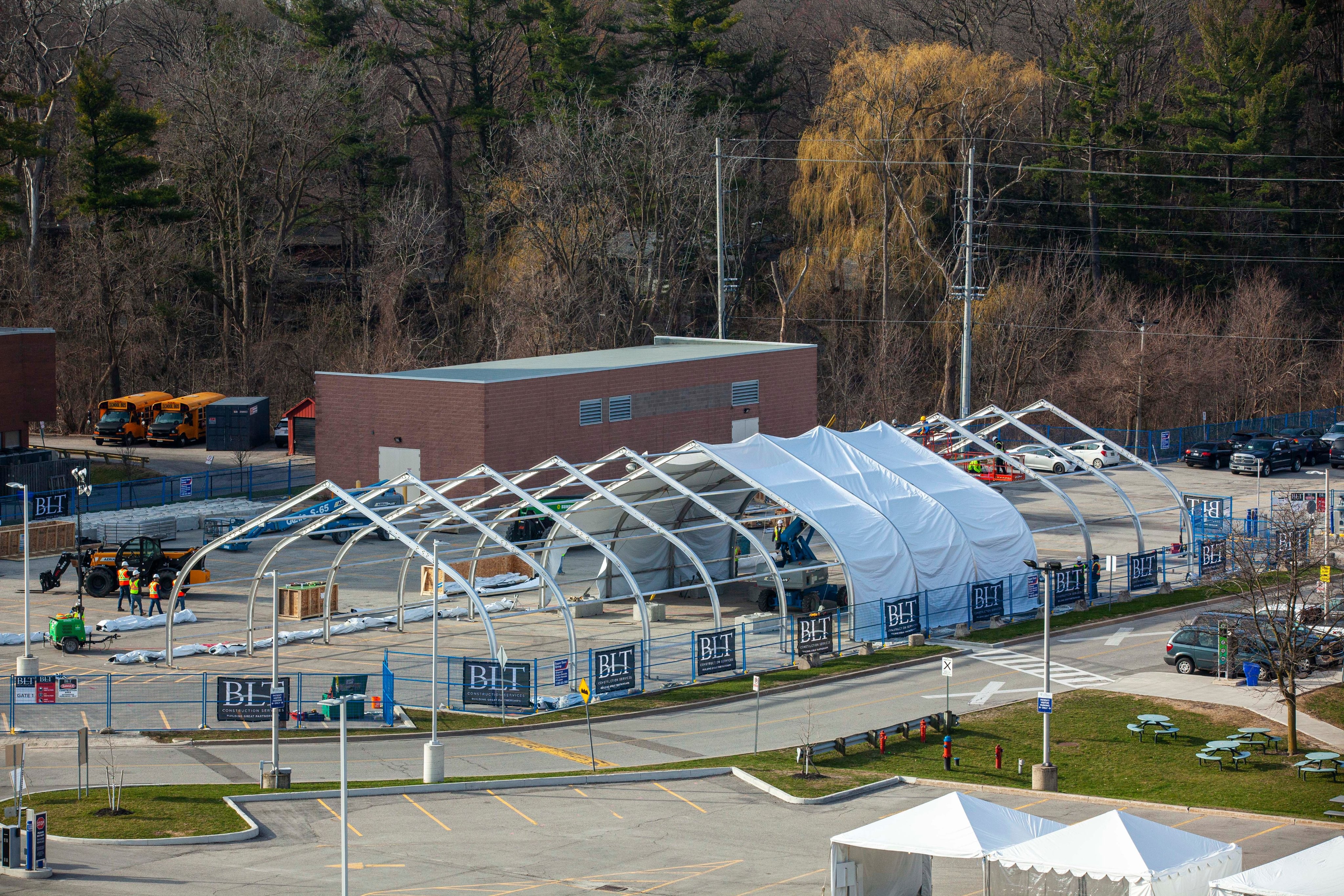 Temporary hospital space being set up at Mississauga Hospital this week.

The province is also temporarily allowing hospitals to increase capacity by using the beds of retirement homes “without certain labour relations implications during the declared provincial emergency,” the release states.

According to the latest numbers from healthcare providers in Peel, the number of patients requiring hospital care as a result of contracting COVID-19 continues to increase.

At Trillium Health Partners, which also operates Credit Valley Hospital, it is currently treating 62 patients for COVID-19 in its two facilities, 23 of them in critical care. It’s not known how many require ventilators.

William Osler is currently treating 34 patients for COVID-19. It’s not clear how many of those are at Brampton Civic or Etobicoke General or if any of them require ventilation.

On Thursday it was announced that an employee at Brampton Civic, an environmental services worker responsible for cleaning the facility and patient rooms, had passed away at the hospital where he worked after contracting COVID-19. The man, who was in his early 50’s, died at Civic Thursday morning, according to a press release from Peel Public Health. The release also states the man “likely” acquired the virus from community transmission and not at work, based on an investigation that was conducted. It’s unclear how local public health officials made this determination.

According to William Osler's medical director of critical care, Dr. Brooks Fallis who spoke to The Pointer, the man was admitted to hospital on March 27 and from the emergency department was transferred directly to the ICU where he remained until his death.

The City of Brampton continues to see instances of COVID-19 among its transit workforce with news reported Friday that a third member of its staff, a bus driver, had tested positive for the virus.

According to a press release, city officials were made aware of the positive test on April 9 involving a transit operator from Brampton Transit’s Sandalwood Facility. Following an investigation with Peel Public Health the city determined the final day the operator worked was April 3, driving the 501 Zum Queen Street route and the 502 Zum Main Street route.

“People who travelled on the buses in review on the above day who are feeling well, with no symptoms, should continue to go about their daily routines and not call Public Health. If you develop symptoms, please call Public Health,” the release reads. “Peel Public Health also indicates that there is no additional risk on a public transit bus than there would be in the general community.”

The release also notes that Brampton Transit is continuing to carry out enhanced cleaning and sanitizing operations for its buses every 24 hours. Additionally, facilities, terminal lunchrooms, tables, counter and door handles are all cleaned and sanitized twice daily. These efforts are among a long list of changes to the way Brampton Transit operates in an attempt to limit the spread of the coronavirus, including, only loading buses to half-seated capacity, having passengers enter through the rear door in order to limit contact with the driver, and cancelling service on lesser used routes during rush hour in order to ensure physical distancing can be maintained inside the bus. 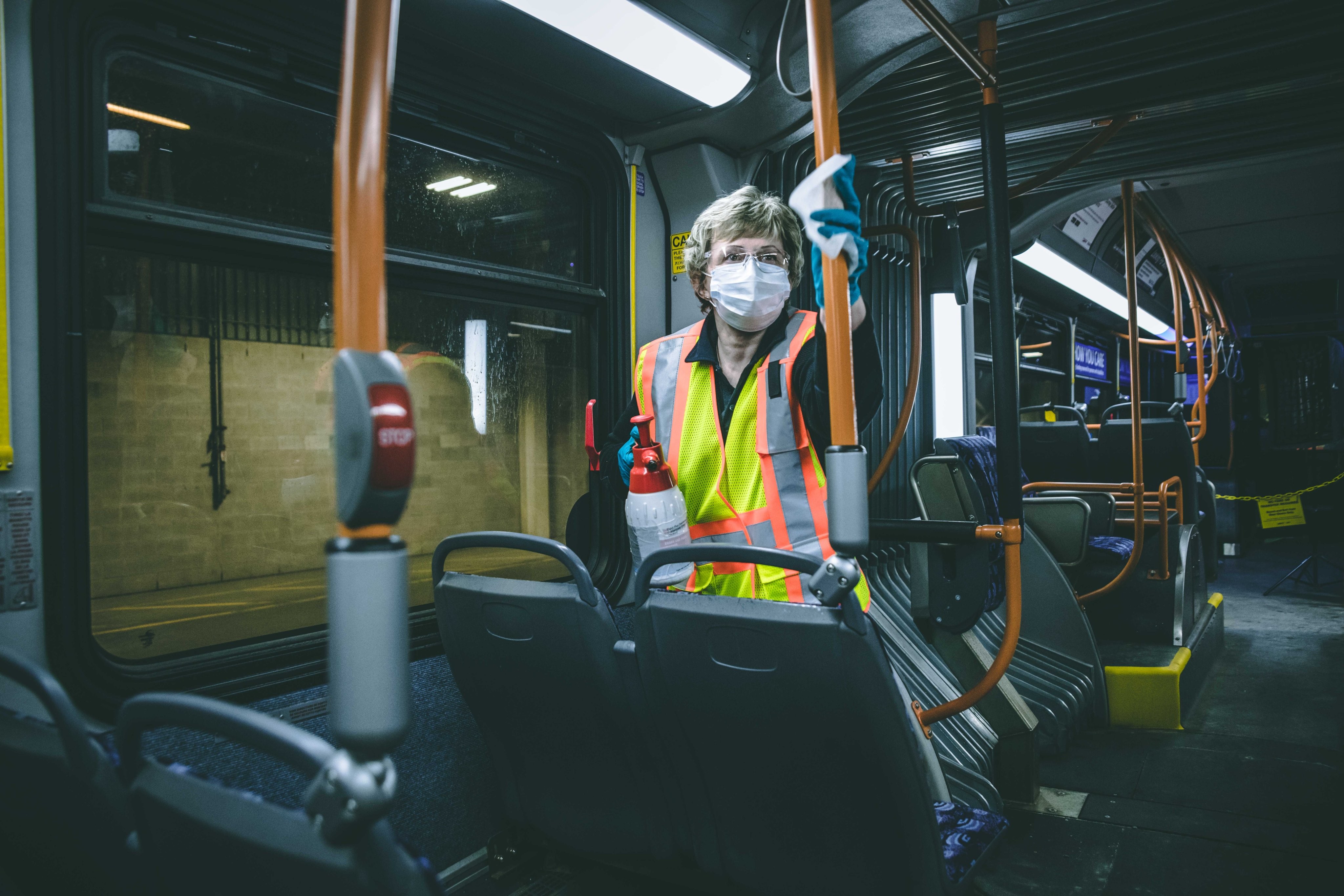 Brampton Transit has introduced enhanced cleaning measures on its buses during the COVID-19 pandemic.

“The City assures the community that it will continue to take every necessary step to help protect employees, customers and the community against the spread of COVID-19,” the city states.

Free transit service continues in both cities to help ensure essential workers can travel to and from their jobs.