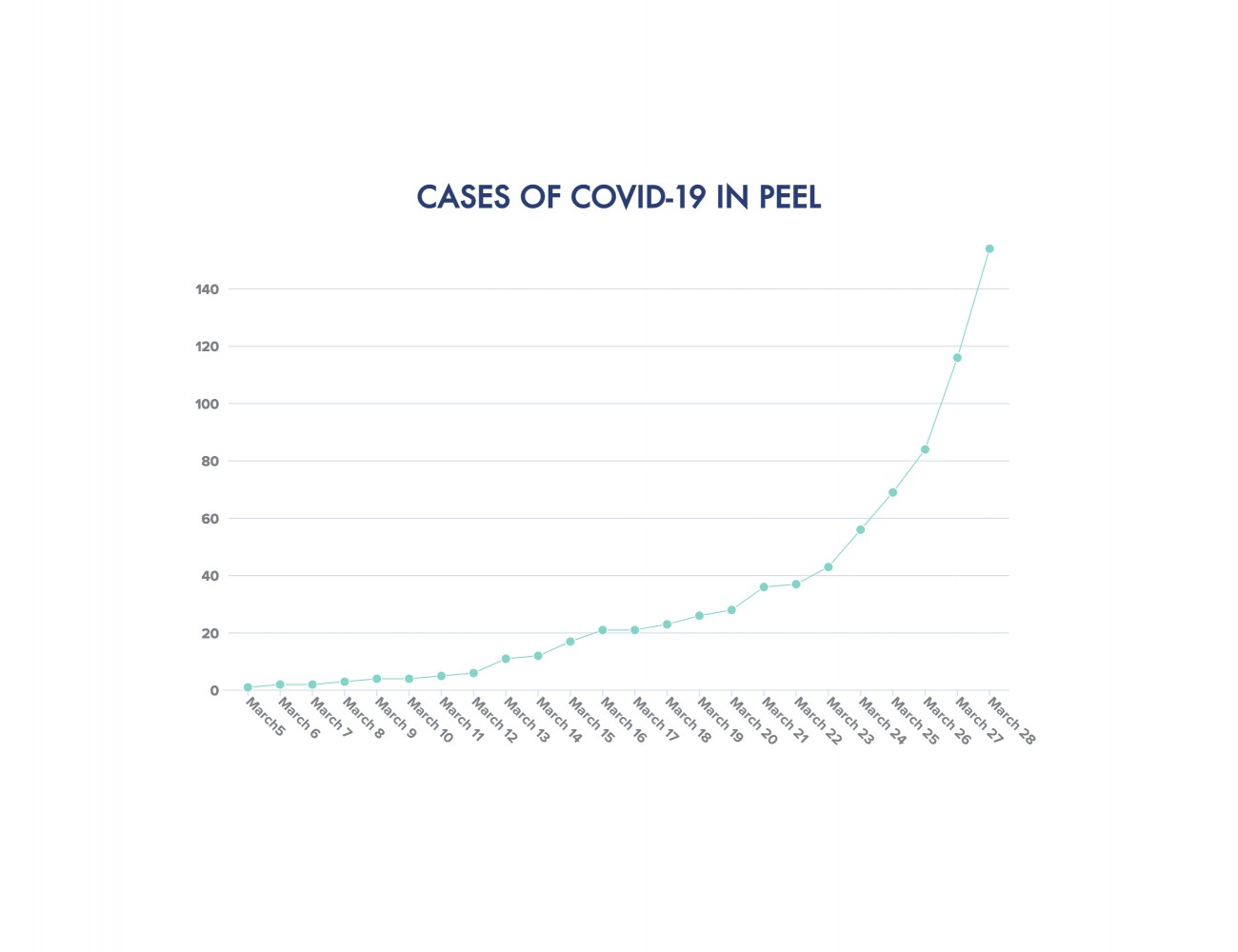 The dangerous upward trend of new COVID-19 infections continued in Peel Saturday morning with the region’s public health unit confirming 38 new cases of the novel coronavirus bringing the total number of cases to 154 spread across Brampton, Mississauga and Caledon.

There have now been 85 cases in Mississauga, 56 in Brampton and 10 in Caledon (three are still pending a confirmed location).

It’s a disheartening trend for many who have lost their jobs and are now staying at home practicing physical distancing, but it’s also not surprising. 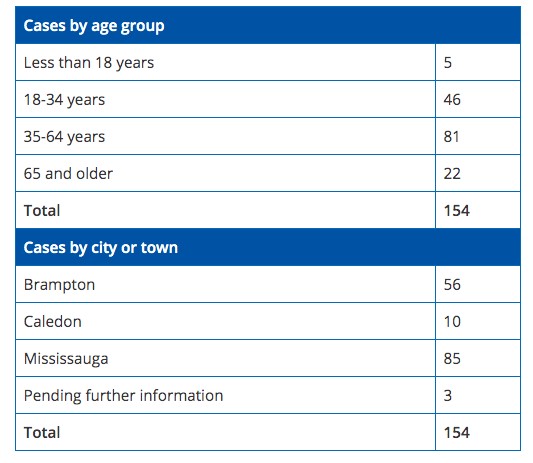 The latest number of confirmed cases of COVID-19 in the Region of Peel.

This week, Ontario’s top health officials have repeatedly said it is too early to start seeing the impact of physical distancing measures put in place by all levels of government, especially because many travellers only recently returned from March break vacations. Extensive measures including the closure of all city facilities, parks and playgrounds by many municipalities across Ontario, the shuttering of all “non-essential” businesses by the provincial government and the enactment of the Quarantine Act by Ottawa, forcing returning travellers to enter a mandatory 14-day self-isolation or face stiff penalties or prison time, are all part of the effort to contain the killer virus.

Peel’s upward trend in infection rates is similar to numbers observed across the province, with Ontario seeing an increase of 151 cases, an almost 15 percent spike, bringing the total number of people infected to 1,118; and the country, as reported cases jumped to 4,689 Friday night, including 53 reported deaths, 18 of them in Ontario. Of Canada’s reported cases, 2,517 of those are confirmed to have been infected by COVID-19, to date. 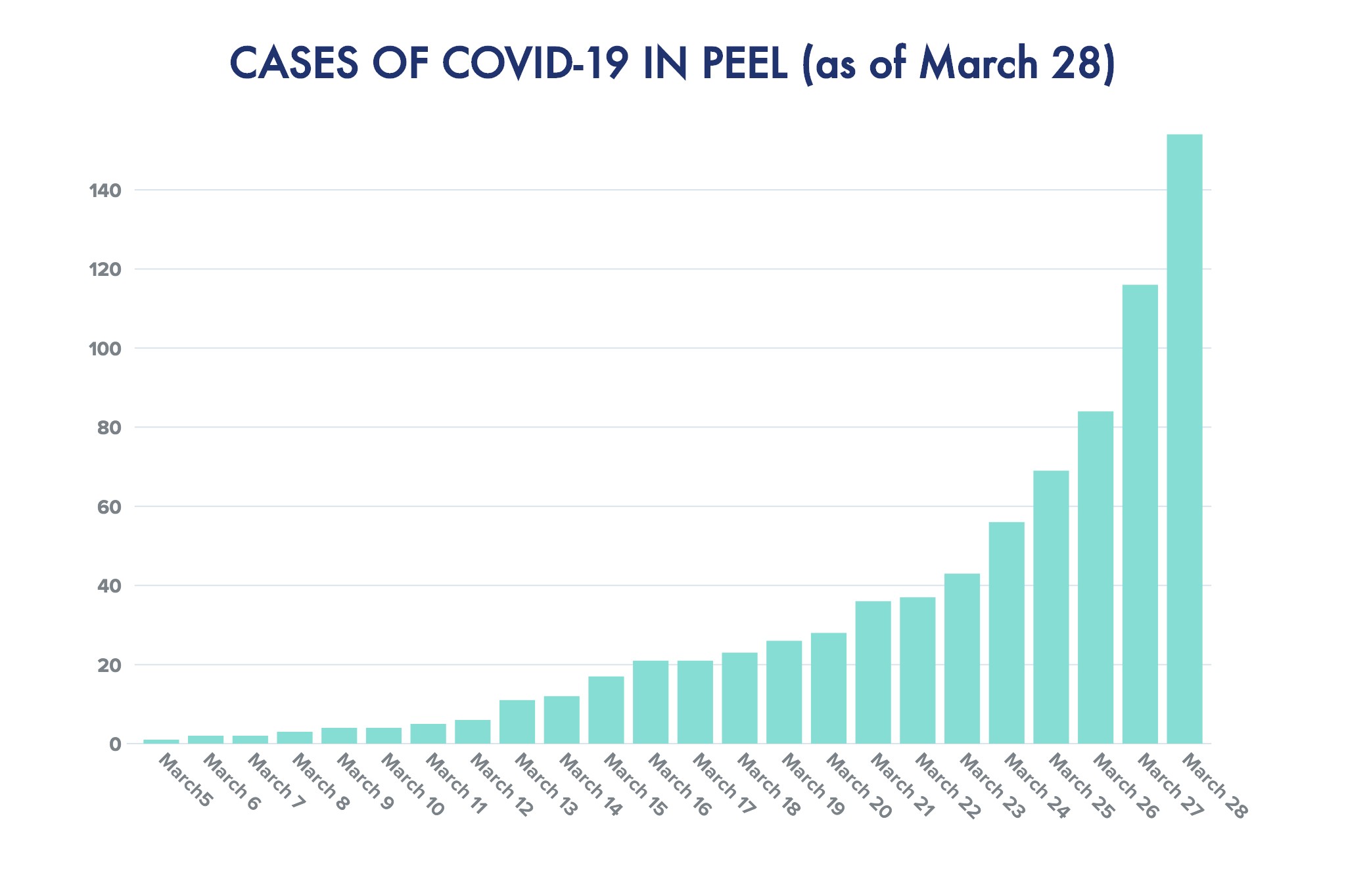 In a media teleconference Friday, several members of the provincial COVID-19 command team explained the efforts underway to build capacity in Ontario’s ICUs as well as increasing stockpiles of personal protective equipment (PPE) and ventilators for frontline healthcare workers in preparation for a worst-case scenario. Already, nurses and doctors on the front lines, as well as the associations that represent them are sharing concern over the lack of PPE to protect them should COVID-19 begin to surge inside local hospitals.

Similar to efforts during wartime, both the provincial and federal government have enlisted the help of local businesses that are able to assist with the manufacturing of PPE and other needed supplies like hand sanitizer. Many businesses have stepped forward, earlier this month alcohol distilleries like Dillon’s, Spirit of York and Reid’s Distillery have all shifted to make hand sanitizer, and Bauer, the hockey-equipment giant, announced this week it will begin manufacturing face shields for first responders.

This type of production is essential as many previously existing supply chains for PPE have been disrupted by the novel coronavirus. In January, Taiwan banned the export of PPE in order to keep supplies in-country to battle the virus. Last week, the European Union followed suit in an effort to keep as much PPE on the continent as possible. The news came about a week before British Prime Minister Boris Johnson announced he too had tested positive for the new coronavirus along with two of his aides.

For Toronto and much of southern Ontario, being cut off form the European Union was particularly disruptive as many of the hospitals in the area relied on a single 3M plant in the United Kingdom for much of their PPE. To make matters worse, the majority of PPE is manufactured in China and other parts of Southeast Asia — close to the area where the virus in humans originated — and the Chinese government has been purchasing most of the PPE before it can be exported. This has impacted Canada’s access to the necessary N95 respirator masks that protect nurses and other front line workers from the airborne particulate that spreads COVID-19 from infected patients. 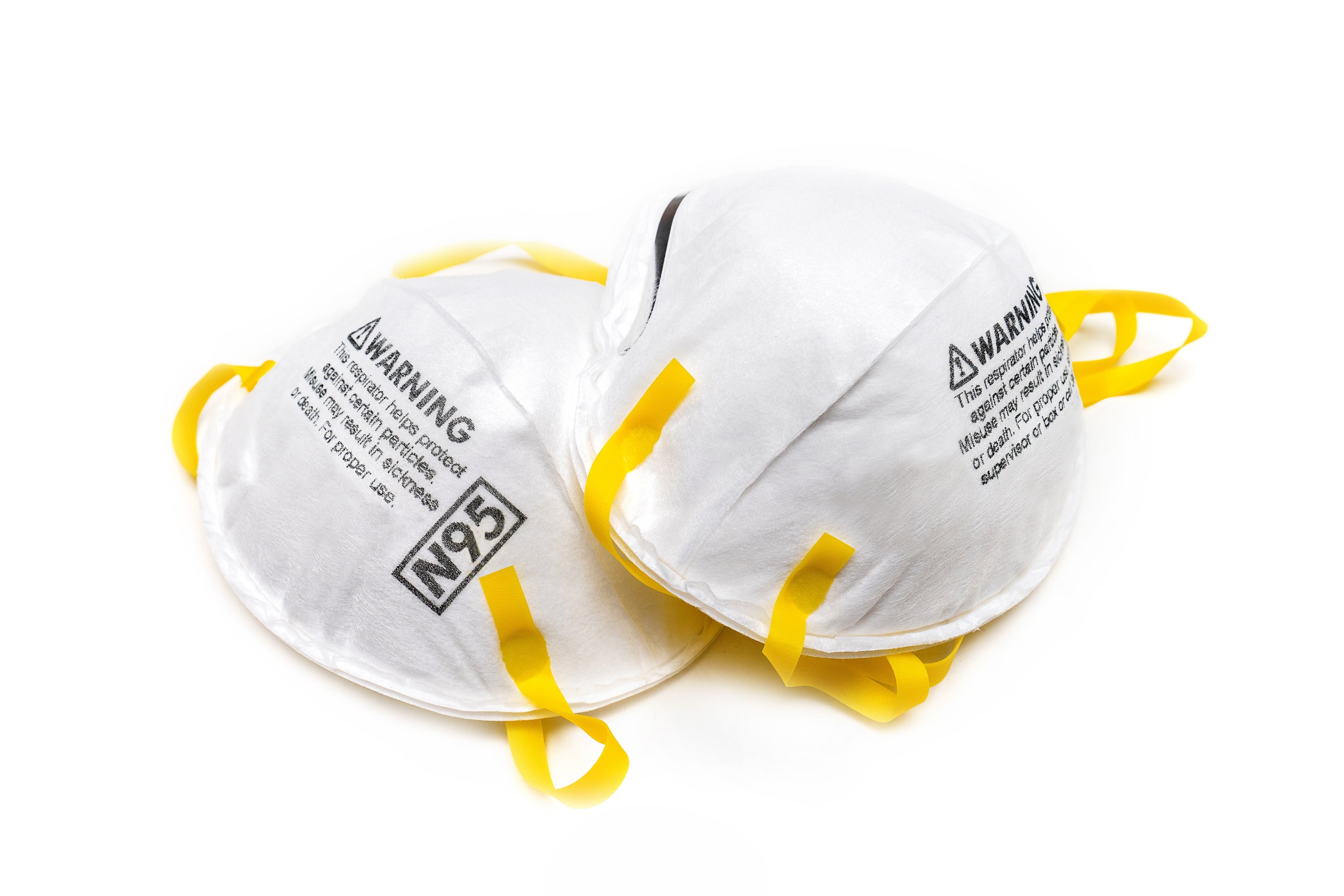 N95 respirator masks are crucial for protecting fronline healthcare workers when dealing with those infected with COVID-19.

No shortages have been announced locally, but in an effort to stockpile needed supplies, the William Osler Health System, which operates Brampton Civic Hospital and the Peel Memorial facility for preventative care, has announced a PPE collection drive encouraging local businesses who have surplus supplies to donate them should a surge in demand occur.

“Personal protective equipment is critical to ensuring the health and safety of our patients, staff and physicians, and never has it been more important than it is right now as we fight the spread of COVID-19,” says Kiki Ferrari, EVP, Clinical Operations for William Osler Health System. “Osler staff and physicians are working tirelessly to ensure we keep our patients and the community healthy, and we are committed to providing our teams with the supports and equipment they need for safe, high-quality care delivery.”

Local hospitals may also get a helping hand from the federal government which has begun to distribute stockpiles of PPE to Canada’s provinces and territories, and Ottawa has also offered financial assistance to businesses that are able to shift their manufacturing lines to create needed medical supplies.

“Canadian manufacturers want to play a critical role in supporting Canada’s response to the COVID-19 crisis. They can and want to contribute to flattening the outbreak curve,” said Dennis Darby, President & CEO of Canadian Manufacturers and Exporters (CME) in a press release following the announcement. “We are pleased the government is adopting CME’s recommendation of helping to scale-up businesses that are already part of the supply chain, which will enable a rapid response from businesses.”

However, some concerns have been raised about the ability of some businesses to convert their production lines in a timely manner, especially to be able to meet the stringent health standards required to produce medical supplies.

In the United States, to help with this effort, U.S. officials have relaxed such standards in order to get needed products made quickly, but Canada has yet to take such steps.

The move came on the same day that America’s COVID-19 reported case total crossed the hundred thousand mark. It now has the highest number of confirmed infections in the world.