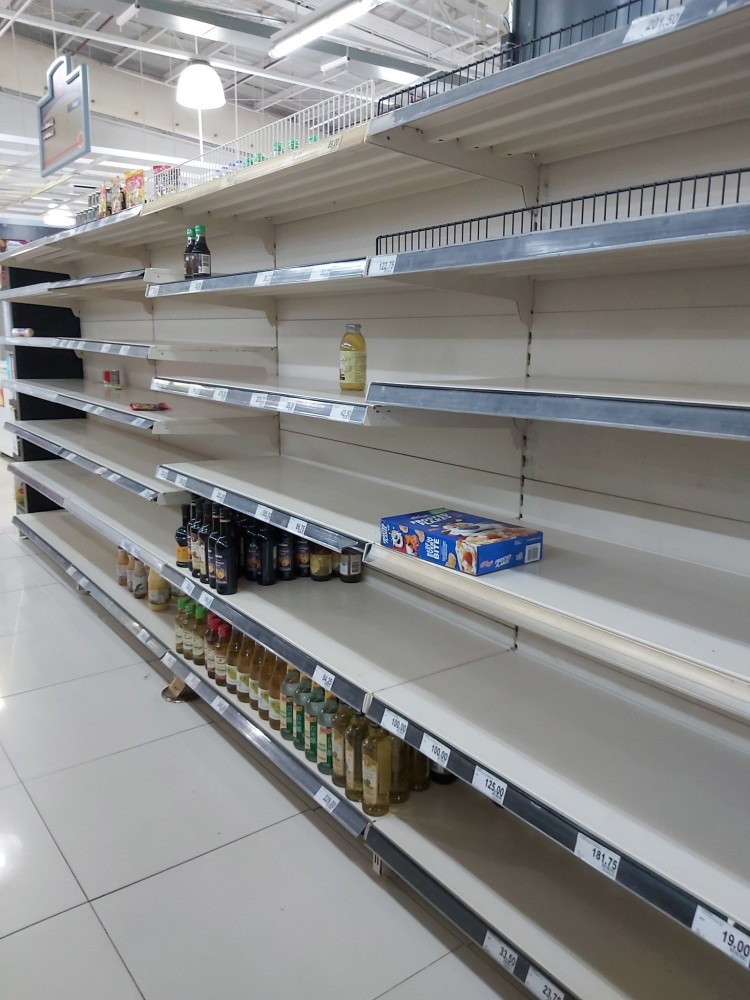 Photos from The Pointer files/Unsplash/Twitter

On Tuesday morning, Premier Doug Ford declared a state of emergency in Ontario. The province is mandating the closure of libraries, private schools, licensed child care centres, bars and restaurants (minus those offering takeout and delivery), theatres, cinemas and concert venues.

Another announcement came Monday evening when the Minister of the Attorney General spokesperson Jesse Robichaud confirmed that no new eviction orders will be issued until further notice.

The rapidly changing circumstances of the spread and containment of COVID-19 are impacting society as a whole, but those who are economically disadvantaged will feel these changes the most. 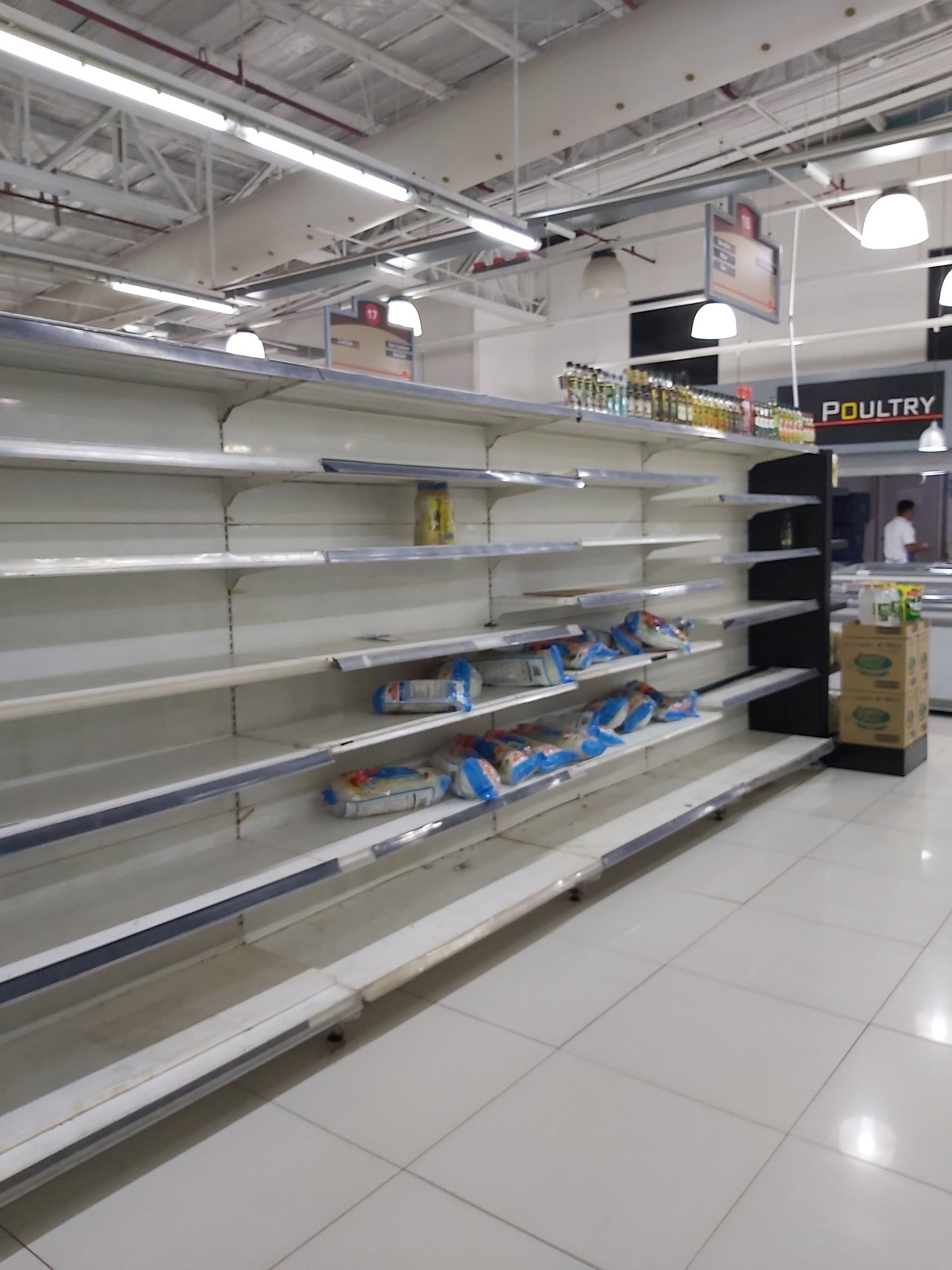 Seva Food Bank supplies approximately 50,000 pounds of food a month to needy families from its two locations in Mississauga. Or at least it used to, until this week.

With COVID-19 cases increasing in Peel and shutdown orders in place, the food bank has been forced to close its Malton and Wolfedale locations since Monday. Manmeet Singh admits, moving forward, there might not even be basic foodstuffs left — rice, cooking oil, sugar, flour, cereal, eggs. These are all items in high demand during a global pandemic as the shelves of grocery stores lie empty from panic buying and hoarding.

Food bank staff are currently consulting on an emergency plan to keep Seva operational during the shutdown period. 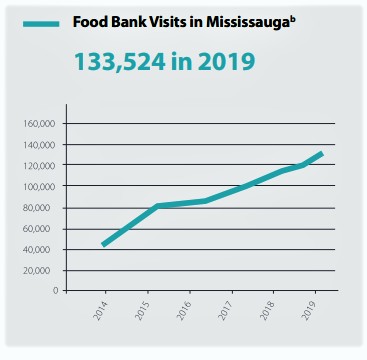 The closure, according to Singh, will buy some time for Seva to determine how to secure food products for residents in need, as well as come up with a plan to prevent infection of staff and volunteers. Because of the restrictions, food bank locations will remain closed but volunteers, if some can be found, will make non-contact drop offs of food parcels for residents to pick up.

“People who are going to [come down with COVID-19] are going to be malnourished, so we need to prevent that from happening as much as possible,” said Parrish of the emergency funding.

Mississauga Mayor Bonnie Crombie has also called for more food bank support, making a plea for donations via social media. In a statement, the mayor’s office said Crombie’s efforts have caught the attention of Paramount Fine Foods CEO Mohamad Fakih who has promised to support the cause, as well as Ahmed Hussen, Federal Minister of Families, Children and Social Development who has pledged his government’s participation in developing a COVID-19 “contingency plan” for the homeless.

“The Mayor has been very vocal in her efforts to ensure that our vulnerable populations, including our city’s homeless, receive the support and care they need as we face this unprecedented challenge,” said a spokesperson for Mayor Crombie. “She has rallied the community to make donations and show their support for the Mississauga Food Bank to ensure that our City’s homeless and at-risk of homelessness community continue to have access to healthy food.”

The questions Seva is grappling with are now being asked by all food banks wanting to serve residents amidst COVID-19 shutdowns. But food insecurity has long been an issue in the region.

Last year, use of Mississauga food banks rose 16 percent from the year before, four times the average compared to the GTA. A report prepared by the Mississauga Food Bank (MFB) last November, Who’s Hungry, found low income residents in Peel spend upwards of 74 percent of monthly income on rent and utilities, leaving them $7.83 cents a day for all other expenses, including food.

Housing costs have been steadily rising. In turn, Peel Region has approved an ambitious plan to boost affordable housing by thousands of new units before 2031, although few investments have been made and funds have largely been secured by re-allocating old revenue streams towards the plan.

That leaves little money for food banks, which depend on fundraising and other supports to supplement their razor-thin operating margins. 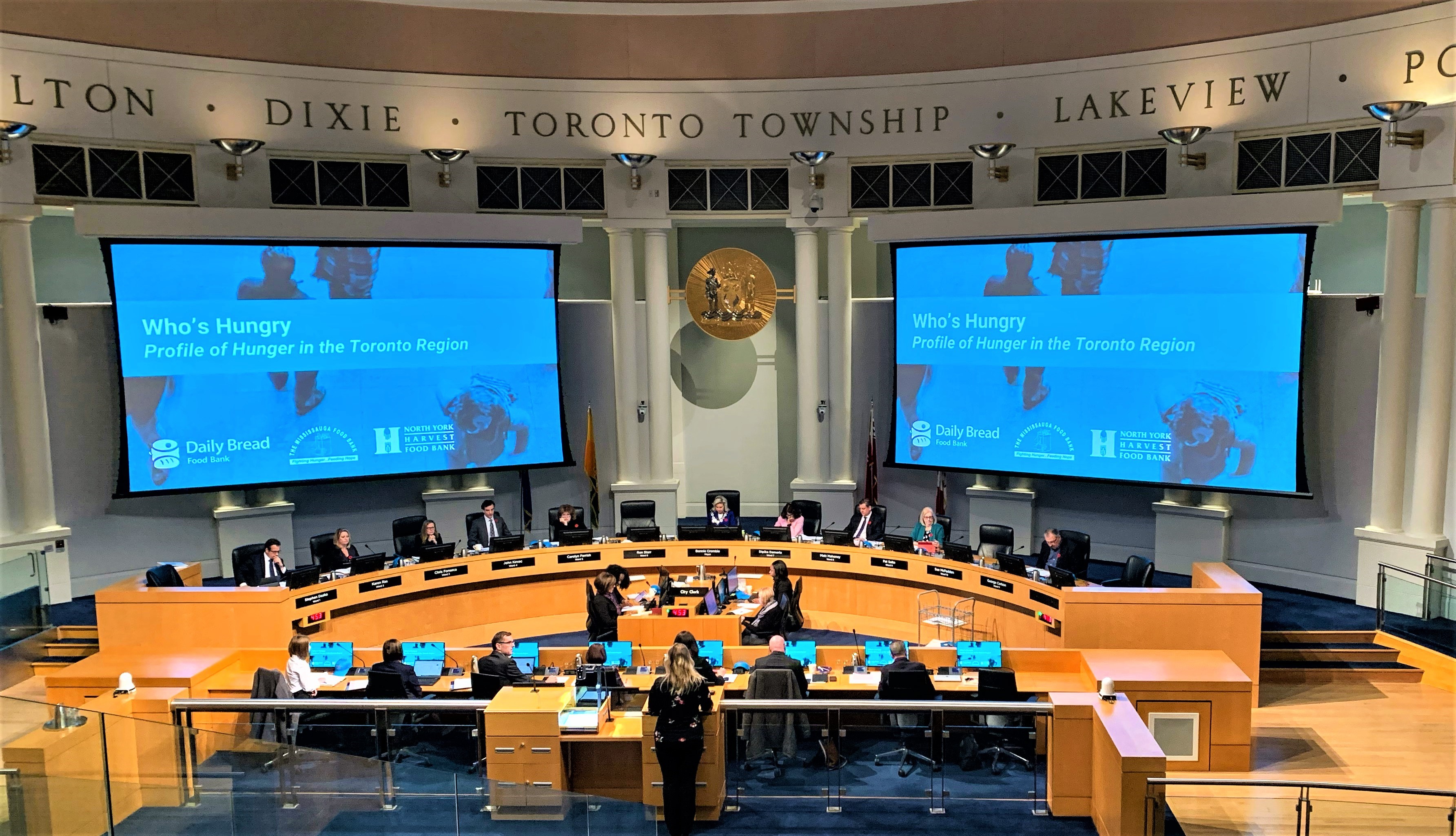 Meghan Nicholls, executive director of the Mississauga Food Bank, presented the Who's Hungry report to council

With COVID-19, opportunities to raise money to buy food through the proceeds of large fundraising events are no longer possible, says Meghan Nicholls, executive director for MFB. While MFB sources a lot of its supply from larger food producers, it also relies on contributions from bin drop-offs in grocery stores and fire stations — no longer happening with the spread of the coronavirus.

“I understand people are thinking of their families’ needs right now,” said Nicholls. “[B]ut there are many other families, people with no financial means, who can’t afford to stock up.”

In lieu of food, MFB is seeking financial donations instead to purchase food directly from suppliers, said Nicholls who is on a 14-day self-isolation after returning to the country last weekend following a trip abroad and has launched an online campaign.

Food banks aren’t the only poverty relief group grasping for answers amidst COVID-19 shutdowns. In the case of tenants facing evictions and the advocates who represent them, there are many unanswered questions, say Peel region community legal clinics concerned with the lack of clarity coming from the province. 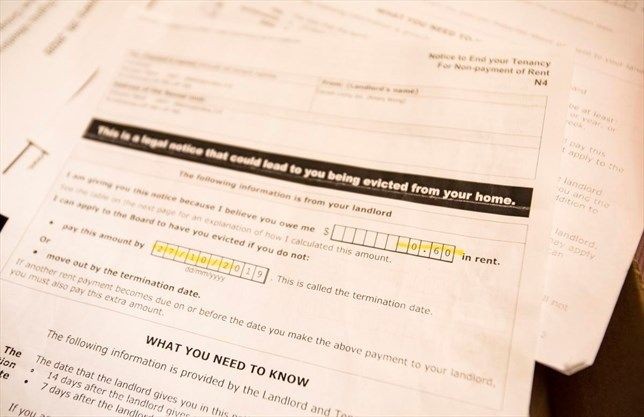 On Monday evening, the province announced no new evictions will be ordered through the Landlord and Tenant Board (LTB), but has not clarified if the moratorium will also apply to cases underway. A spokesperson for Tribunals Ontario referred questions about existing cases to the Attorney General’s office.

“Tribunals Ontario and the Landlord and Tenant Board are reviewing pending eviction matters in light of the rapidly evolving circumstances related to COVID-19, and can confirm that no new eviction orders will be issued until further notice,” said Julia Timoshenko in an email.

Allowing eviction hearings to proceed in Peel will put further pressure on the region’s safety net, police, first responders, healthcare, at a time when it can ill-afford to, said Fleming.

“All of those aspects of society are being strained right now,” said Fleming. “It can’t tackle anything extra.”

The LTB announced last week it will be suspending in-person hearings during the isolation period. But there’s no indication if eviction proceedings, now to be conducted over the phone or through video conferencing, have stopped.

That means in the midst of an unprecedented health emergency, people could still be at risk of being forcibly removed from the very homes public health officials have urged they remain in to reduce the spread of infection, said Fleming.

“The logical step is to say while the pandemic is happening, don't have evictions,” said Fleming. “They’ve closed schools for Christ’s sake. Suspending evictions falls in line [with protecting the public from infection].”

Without taking into account new measures announced by the Ford government just before COVID-19 became the central concern, that speed up the eviction process for tenants, it takes around 3-4 months of hearings and consultations when evicting residents who have defaulted on loan payments, said Johnathan Alphonso, a licensed mortgage broker based in Mississauga.

Three law firms handle the bulk of cases for home evictions in the GTA, representing clients who have missed a mortgage payment and need to rely on legal counsel to arrange repayment with the lending institution.

In the case of evictions, Court Enforcement Offices, or sheriff’s offices, are responsible for the task of physically removing residents and changing the locks.

Alphonso checked with a Toronto sheriff's office and was informed they were open as of Monday.

“They said it is business as usual,” said Alphonso.

Providers of legal aid services for low-income clients who can’t afford their own lawyers aren’t just concerned about the halting of hearings, but whether their clients will even have enough time to respond to a legal claim against them in the event they are sick.

In a letter sent Sunday by the Greater Toronto Clinic Housing Advocates, a coalition of lawyers, paralegals, and tenant advocates, the group urged the province to immediately halt all matters regarding evictions while the virus rages on.

“We ask that the Landlord and Tenant Board not only postpone in-person hearings of eviction applications, but to avoid scheduling telephone, electronic, and written hearings of eviction applications as well,” states the letter to Doug Downey, the provincial Attorney General and Linda Lamoreaux, Executive Chair for Tribunals Ontario which oversees the LTB.

Eviction orders have been suspended in jurisdictions seeing a massive spread of infection, Miami Dade-County city council made an order last week to suspend them, and similar moratoriums were recently enacted by New York and Santa Monica, California in response to the pandemic.

Recipients of ODSP and other provincial benefits programs are also at risk, warns Douglas Kwan of Mississauga Community Legal Services, who says he’s been informed the Region of Peel is continuing to proceed with the stripping of disability benefits payments and other monthly subsidies complying with judgements rendered during provincial tribunal hearings.

While Kwan says he’s been provided with assurance that evictions won’t be carried out during the isolation period, ripping away benefits now is putting people at risk of eventually losing their homes at the worst possible time. 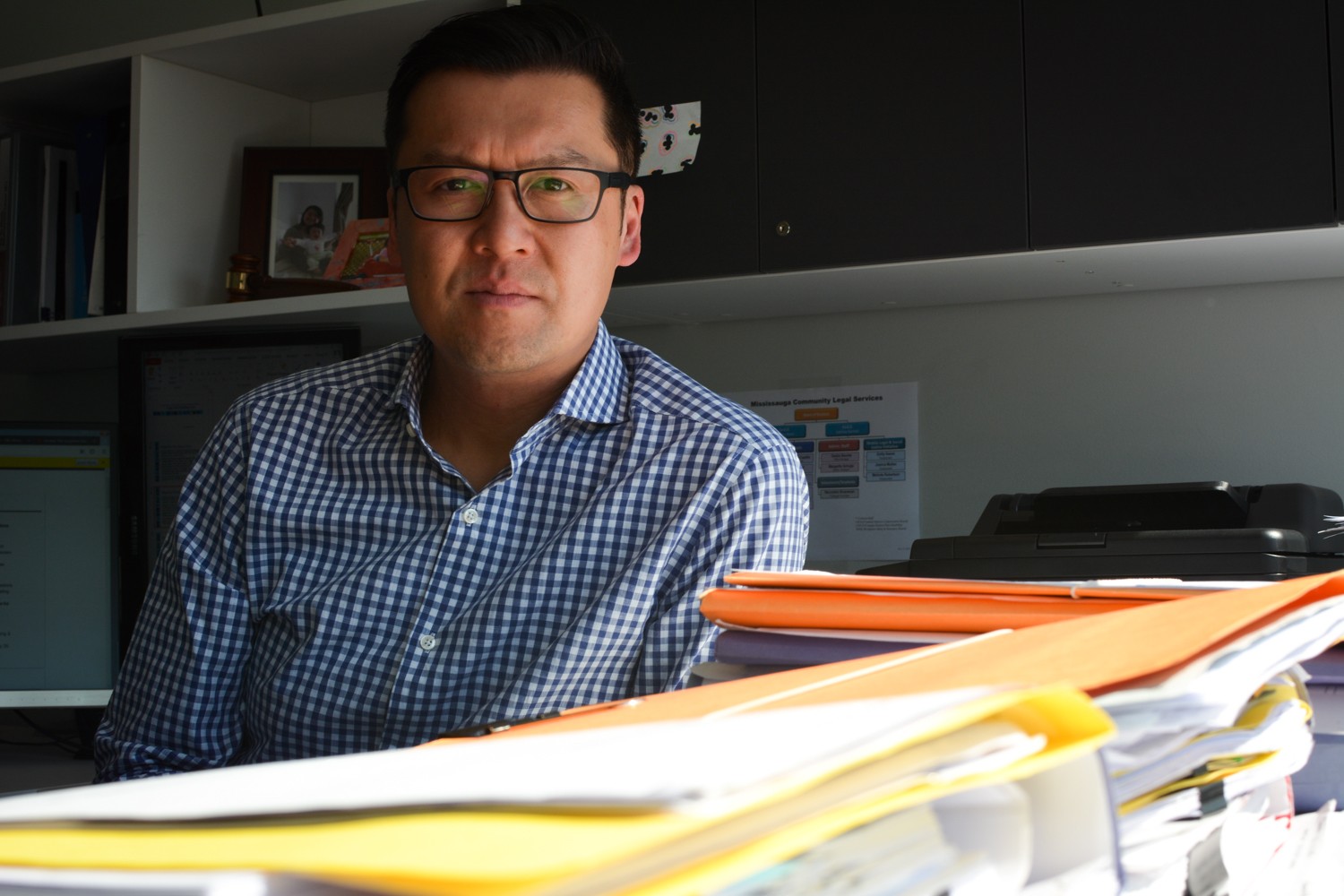 “We don’t want to punish workers and people who can’t pay their rent [because their benefits have been cancelled] and have an eviction decision hanging over their head,” said Kwan, executive director for the legal clinic. “Their homes are hanging in the balance.”

Crombie’s office referred questions on ODSP benefits to the Region of Peel, but expressed the hope an arrangement can be worked out to preserve benefits.

“It would be the Mayor’s expectation that eligible ODSP clients continue to be treated fairly and receive the same level of support throughout this crisis,” said Crombie’s spokesperson.

“Our city’s homeless can still access Regional shelters. We are asking people to please call in advance to allow for appropriate screening.”

The Region of Peel did not respond to inquiries from The Pointer in regards to how stopping ODSP payments will benefit fighting the spread of coronavirus.

In an announcement Monday, the provincial government promised to extend relief to workers left precarious as businesses shutter and the reality of self-isolation sets in.

Premier Doug Ford attempted to provide some assurances to workers in the event they are sick and can’t work or their businesses were shut down by governmental order, a distinct possibility as infection rates rise. Toronto’s Medical Officer has already called on the city’s bars and restaurants and all non-essential businesses to shut down by midnight Monday.

Asked by the media about evictions and protections for tenants and unemployed workers, Ford would not commit to anything specific, only promising he and federal colleagues, coordinating economic relief for the impacts from the pandemic, were examining all options.

“Everything’s on the table,” said Ford.