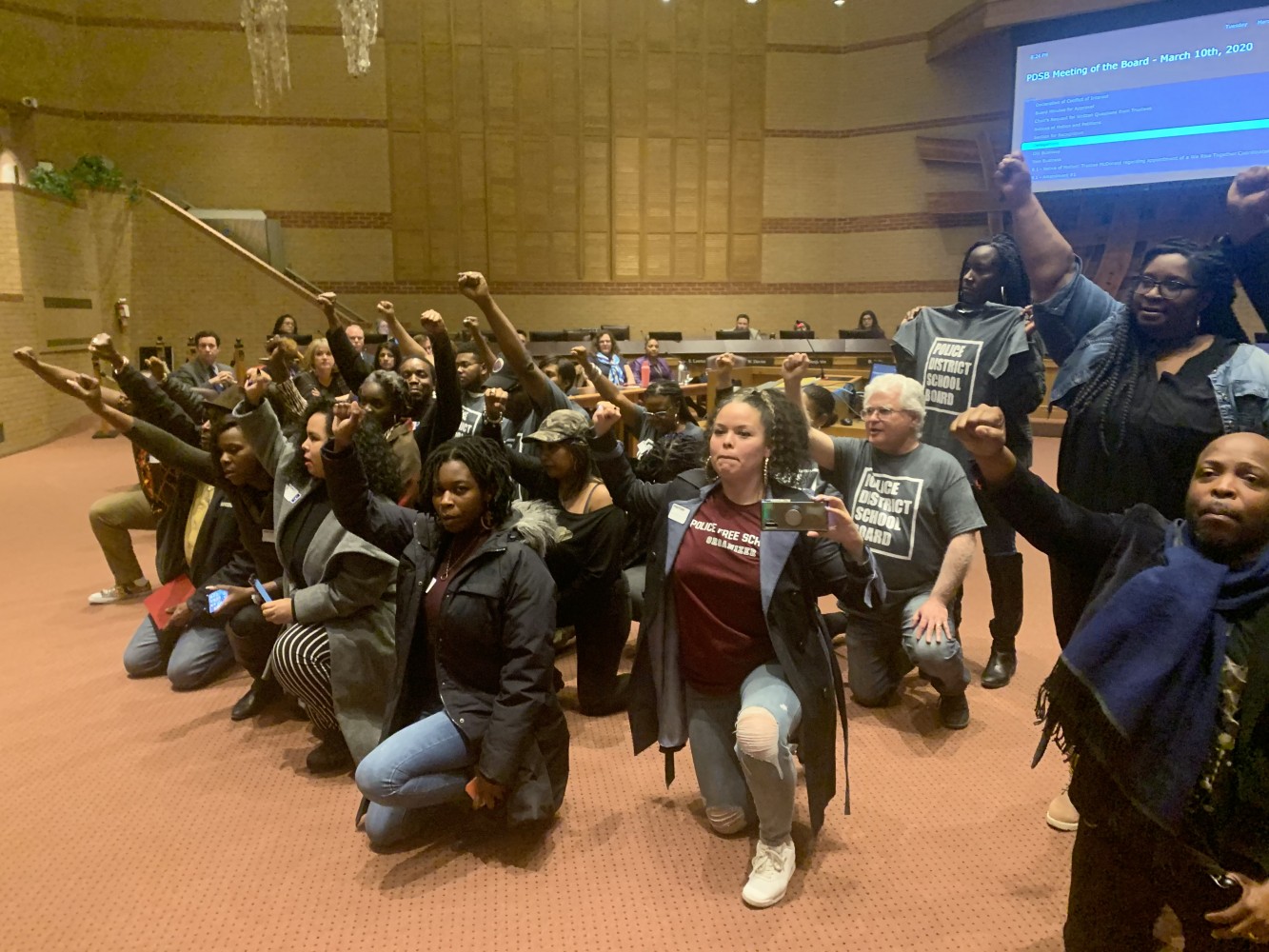 A heavy-handed move by the Peel District School Board (PDSB), ordering at least one Black parent to stay off board property till the end of the school year, highlights its struggles to do the right thing in the face of mounting tension among the Black community.

As frustration on both sides escalates, it seems like the board continues to shoot itself in the foot.

Questions of anti-Black racism have hung over the school board since last year, and recently police had to be called to a board meeting because one trustee said he did not feel safe as parents continued to demand answers.

One of the incidents they want to address was the handcuffing of a six-year-old Mississauga student’s hands and feet behind her back after her school staff called police in response to unruly behaviour. A ruling on the incident announced by the Human Rights Tribunal of Ontario two weeks ago concluded the alarming treatment of the young girl, who is Black, was in part motivated by her race. 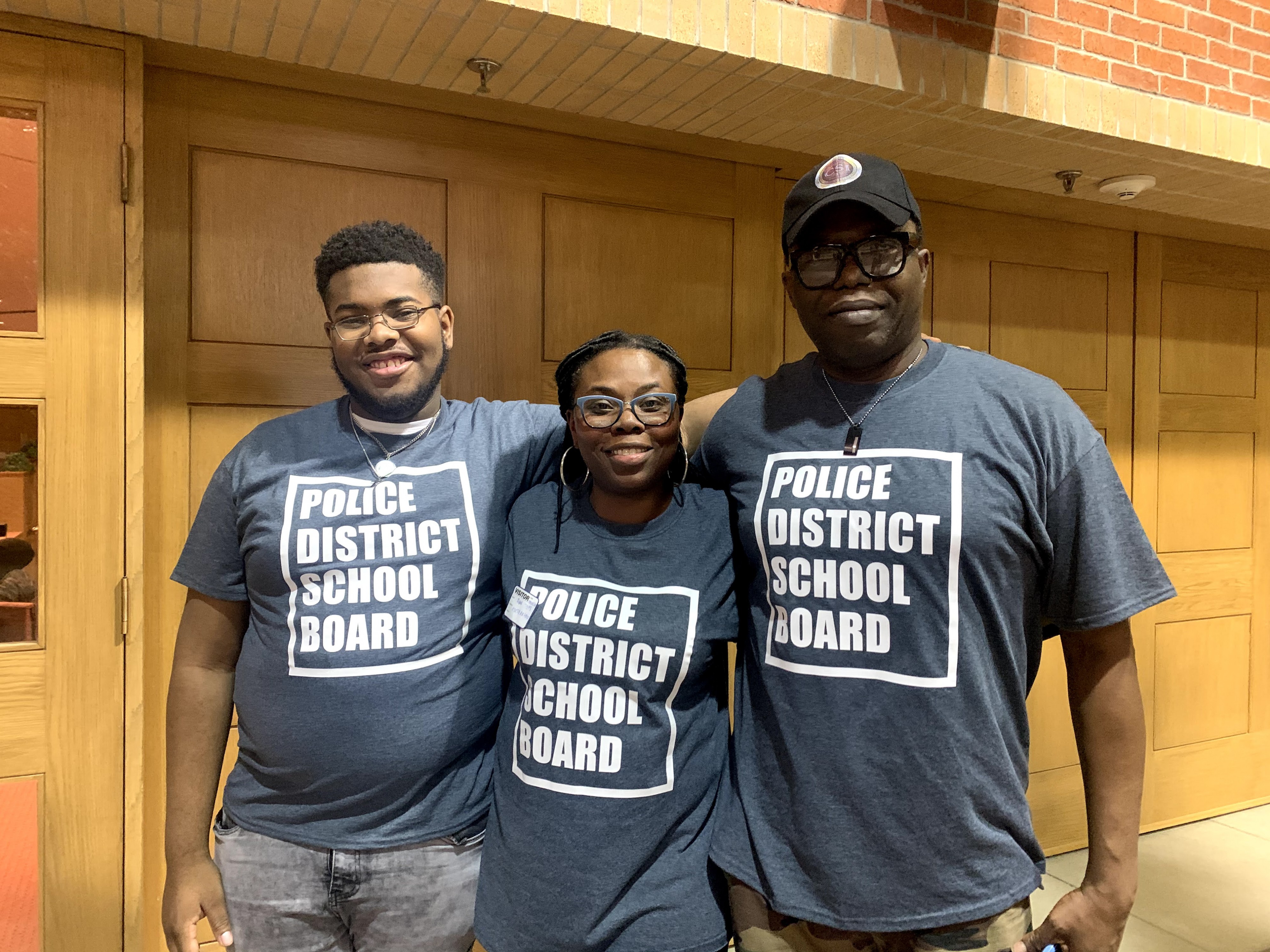 Parents were also outraged last fall when a school trustee, the subject of complaints for a racialized and demeaning comment allegedly made in reference to the sizeable Black student population at McCrimmon Middle School in Brampton — he called it “McCriminal” — was cleared of any wrongdoing by the PDSB’s integrity commissioner.

The tensions escalated when the person responsible for equity and inclusion within the board, associate director Poleen Grewal, filed her own complaint with the Human Rights Tribunal of Ontario, alleging deep anti-Black racism, discrimination against her and reprisals for trying to address the entrenched problems.

The story has taken many twists and turns resulting in an unprecedented provincial review of allegations of anti-Black racism within PDSB, which is expected to be released by the education ministry any day after Minister Stephen Lecce ordered the probe late last year when the relationship between board members and the Black community had collapsed.

Many in the community allege the school board is racist and simply does not understand or address the issues faced by Black parents and students.

Most recently, in February, a meeting of PDSB was ended behind closed doors after the police were called. Peel Regional Police officers were summoned to the board meeting at the PDSB’s main building on Hurontario Street after frustration mounted among members in the public audience over the chair’s out of order ruling in response to a trustee’s proposed motion to have parents called when police are asked to attend a student matter. The motion related to policing in schools and the exploration of appropriate police presence.

This week, PDSB dug in on its controversial decision, issuing a trespass notice to at least one parent. The Pointer was informed that another parent was also issued a trespass warning.

On Monday, a day before the school board was to meet publicly for the first time since police were called, Idris Orughu, a parent who has nieces and nephews in the PDSB and is one of the most vocal critics of the the school board’s record on eradicating racist practices, received a letter from PDSB Director Peter Joshua.

In the letter, Orughu was informed that he was barred from setting foot on PDSB property and attending future school board meetings until the end of the 2019-20 school year. The reason given was separate instances of “improper conduct” as well as “harassing and threatening comments” he is alleged to have made toward Peel trustees. 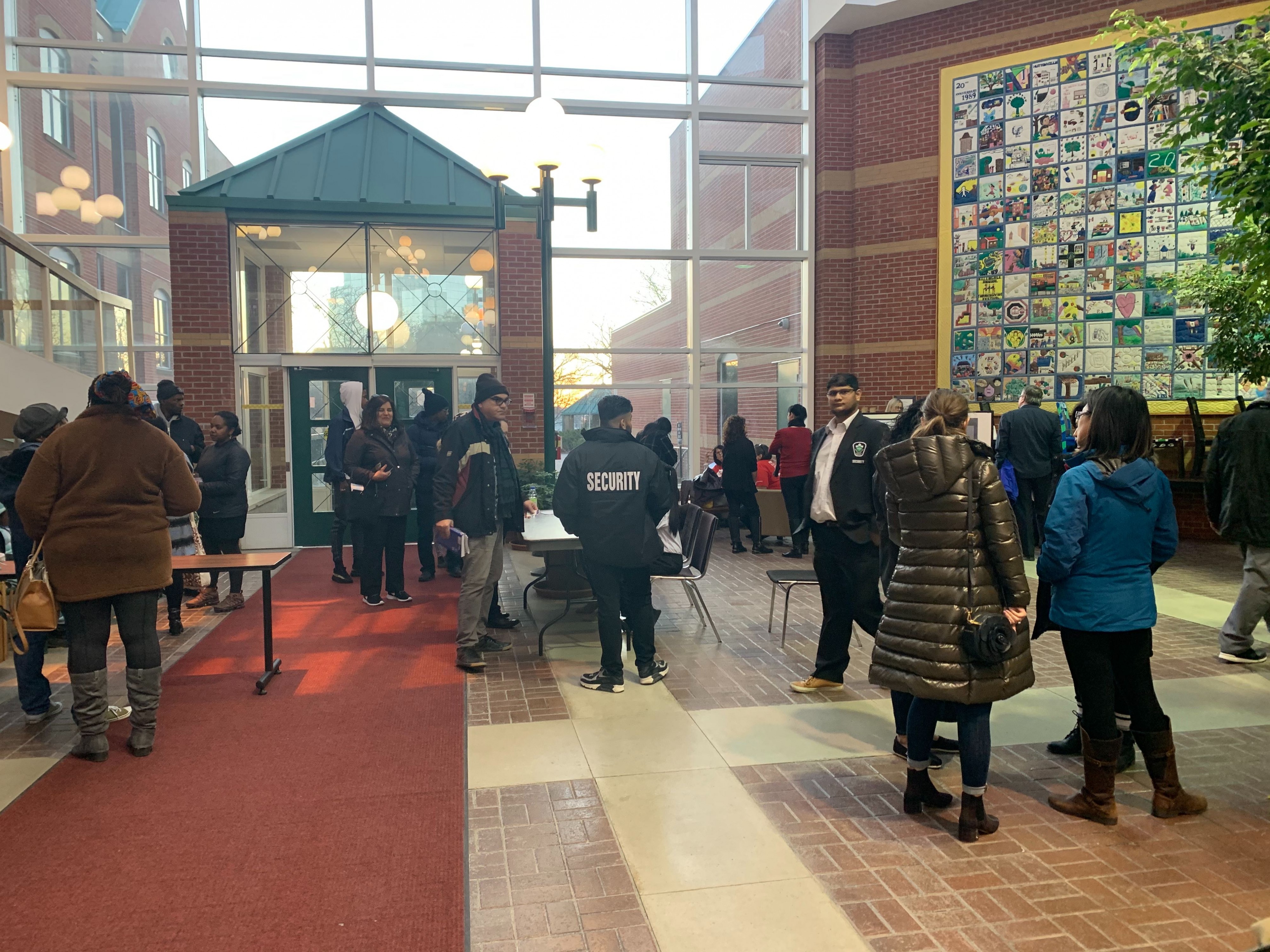 The Tuesday PDSB meeting had a strong security presence

“Please be advised that you are not to attend on any property of the Board, including all schools and administrative officers, for any purposes whatsoever,” the letter reads, before citing specific provincial bylaws Orughu is alleged to have violated. “If you refuse, the police will be contacted and requested to remove you from the property,” the letter states. It is cc’d to the region’s police force.

Orughu strongly denies engaging in different instances of harassment toward PDSB officials, which, according to the letter, took place at the Feb. 11 and Feb. 25 board meetings in Mississauga. He said that he has been singled out for continual criticism of the board.

“I have been at the forefront issue of this, and been a pain for the board,” said Orughu, who added that he has provided testimony to Minister of Education Stephen Lecce and others as part of the recently completed provincial review, which has not yet been released. “I have called [the board] out for not doing any kind of engagement [with Black parents].”

The letter doesn’t mention the specific comments allegedly made by Orughu which resulted in the ban. Brampton PDSB Trustee Kathy McDonald, a frequent critic of the school board’s treatment of its Black students, said the letter is disheartening.

“[The PDSB] has doubled down on its efforts to silence the community,” said McDonald on Tuesday, prior to the evening board meeting. “Anyone who speaks up [against anti-Black racism] is ostracized.”

At the meeting of the board, the first since police were called in, security was tight.

Parents, journalists and visitors were asked to sign in with one of four security staff patrolling the premises and requesting government issued identification from all attendees. With many parents and activists arriving early, the doors of the main board room were kept closed until just 20 minutes before the meeting, which started at 7:10 pm.

The Pointer confirmed Orughu, issued with the trespass letter, had chosen not to attend the meeting as a result.

Inside, the board meeting, as things got underway with tension in the air, PDSB chair Brad MacDonald made an unusual announcement not listed on the agenda.

It was an apology — of sorts.

“The police responded to a request for support [in February], this happened because one of our trustee colleagues said they felt very unsafe due to a threat to their personal safety,” Chair MacDonald said. “Because of an active investigation, I can’t provide any details of the threat itself and won’t be able to to respond to questions about this.”

His last sentence was met with vocal laughter from members of the audience.

MacDonald went on to underline that, in his view, the police were not called to respond to parents and teachers in the audience, but instead the specific, unidentified threat. He finished by saying: “I appreciate that the presence of the police can feel threatening and I apologize for the negative impact of having them attend that case.”

After the apology, the meeting continued relatively as normal, with the majority of the large audience waiting for a particular delegation. That presentation was a powerful message by Dr. Tope Adefarakan, who highlighted the problems being faced by many members of the PDSB community, backed up with a silent protest. As the delegation continued, more and more Black parents joined to stand in silent solidarity.

“I’m deeply, deeply concerned in terms of the happenings that have been occurring over the past months, especially at the last board meeting and we are here to say a number of things and also with a number of demands,” Adefarakan said. “The trust is quite broken between the board and the Black community, given that the board has been handing over our children to the police and has been criminalizing our children by calling the police. And now you are criminalizing parents who are concerned about how their children are being treated.” 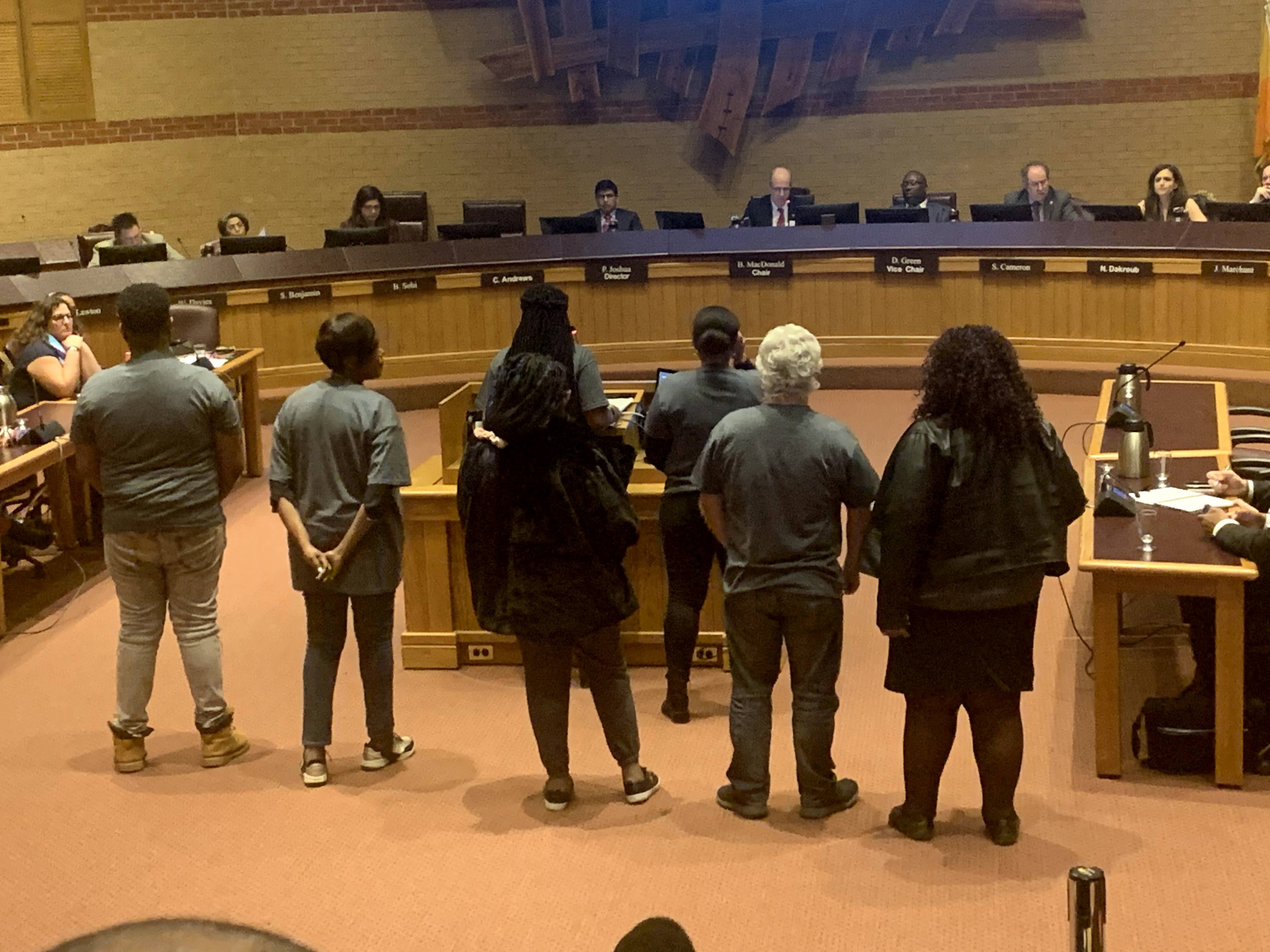 The presentation made a series of demands: hiring a third party to facilitate dialogue between the Black community and the board; answers around who would handle the results of the provincial review; removal of police officers from schools; access to race-based data collected by PDSB and the region and a dedicated afrocentric school in Peel, similar to one previously established in Toronto. The final demand was the one which received the most interest and questions at the end of the delegation.

However, activists fear their calls fell, once again, on deaf ears. Chair MacDonald spent much of the presentation quietly conversing with PDSB vice chair David Green, to the point that a member of the audience shouted out to ask if he was even listening.

“I did see them whispering and I did see him [MacDonald] sighing in exasperation, I think if he could have rolled his eyes, he would have,” Adefarakan told The Pointer. “I think it fell on deaf ears. I think they’re resisting and managing [the situation].”

An example of this resistance, Adefarakan argued, came when trustee Nokha Dakroub raised the issue of trespassing letters. The trustee asked why letters were being sent out on PDSB letter head without full board knowledge or approval. The question, asked at the end of the delegation, was ruled out of order by the chair, who said it had to wait until a later part of the meeting. It was ultimately found to be an issue more relevant to PDSB’s committees. It’s unclear if the board intends to address the issue.

“I think if there was any remorse or any sincerity in terms of really taking a hard look at how to do things differently and listening, it would have shown itself [by answering the trespass letters question], but it didn’t,” Adefarakan said.

Asked if she felt the chair addressed the issues through his apology or explanation, Adefarakan said: “No, no, no, no, not in any way shape or form. I think what they’re trying to do is they’re trying to backtrack and save face because they know that the ministry report is coming very, very soon.”

The provincial review of PDSB, overseen by Patrick Case, deputy education minister and human rights lawyer, is expected to be released soon, with a preliminary report issued at the tale end of 2019.