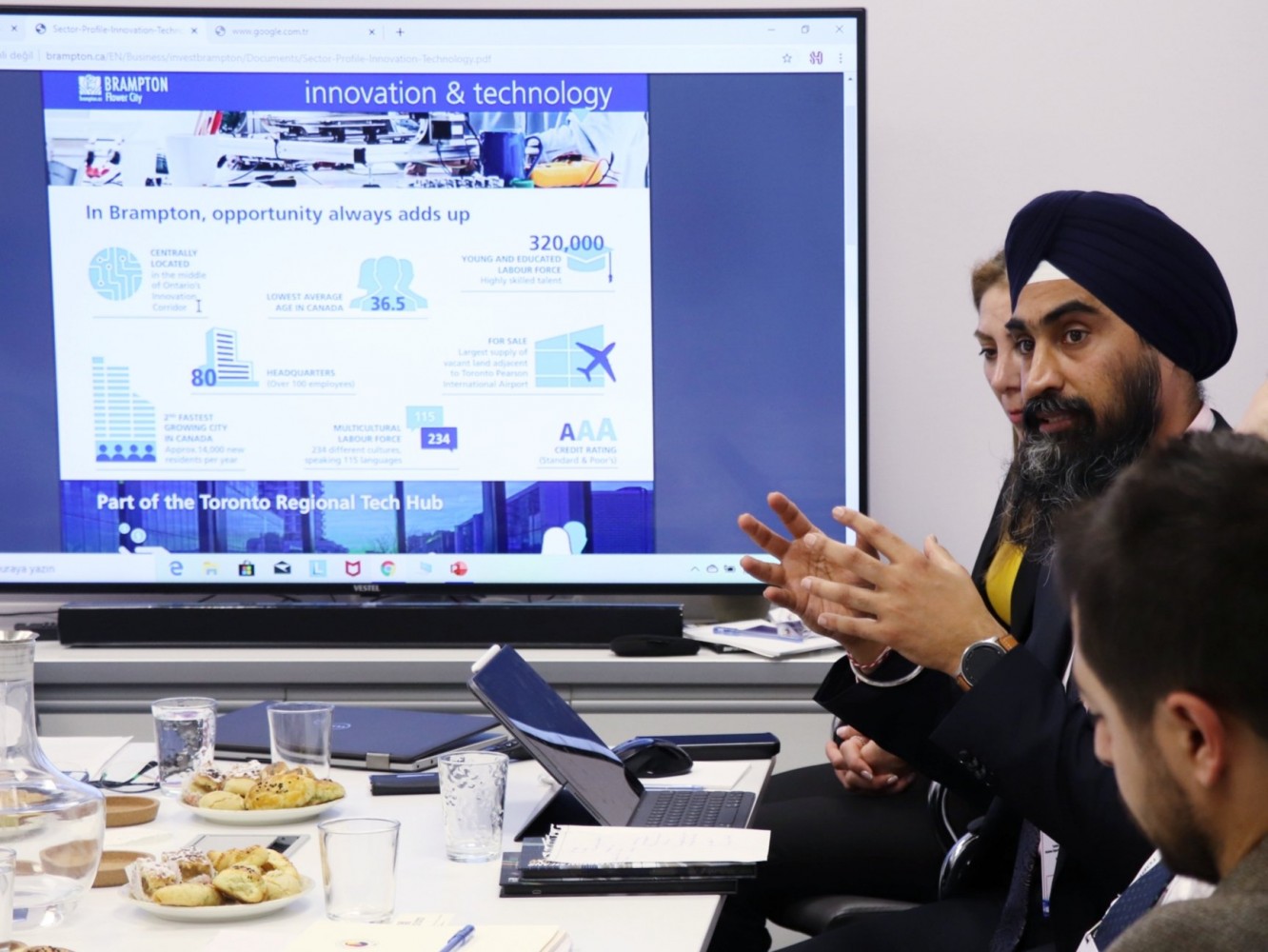 At the heart of the trend is the continued transition towards a knowledge-based economy and away from sectors such as freight. This is bad news for Brampton, with many of the jobs located in its sprawling industrial zones, the epitome of the kind of employment vulnerable to the replacement of workers with machines. 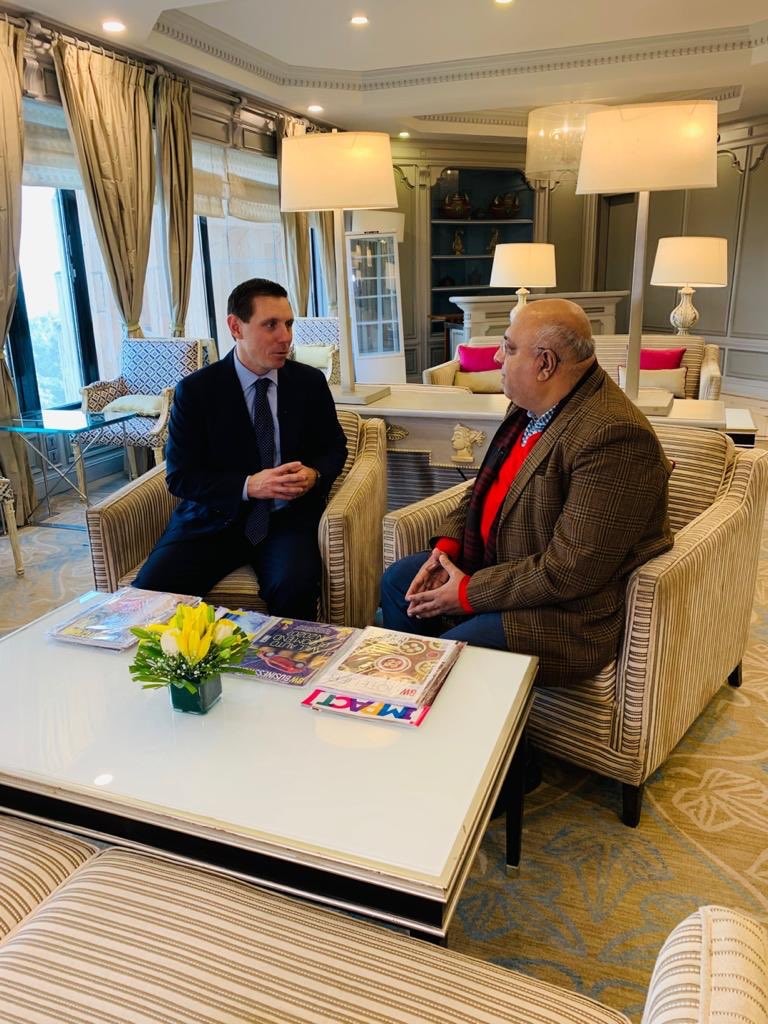 According to research conducted by the Neptis Foundation, 23.3 percent of jobs in Brampton were vulnerable to automation in 2016. This does not compare favourably to 17 percent in neighbouring Mississauga and 13.5 percent in Toronto.

Between 2006 and 2016, 47,150 jobs in finance came to the GTA. According to analysis by Blais, the majority of those were concentrated in Toronto’s downtown, with another cluster in Waterloo.

“You have to look at the competition,” Blais told The Pointer. “How many other places are there in the region that are either doing already, have been doing [or are] trying to do the same thing and how is Brampton going to differentiate itself or be better than those places? Right now, big growth jobs — tech and producer services and finance — they’re basically all going downtown.”

The City of Brampton is trying to change that, and the municipality and Mayor Patrick Brown are betting big on foreign direct investment (FDI).

As the second fastest growing city in Canada, Brampton’s pool for qualified workers keeps getting bigger. The city has launched its FDI strategy, hoping to attract new business by positioning itself as a key place for investment. The FDI strategy focuses on four sectors, including advanced manufacturing, food and beverage, health and life sciences, and innovation and technology.

The end results of the FDI strategy will shape Brampton’s future, making the decisions on this plan quite significant. As Brampton pushes city funds into its FDI strategy, the focus for mayor and councillors needs to be on attracting high-skilled jobs, that can fit into the 2040 Vision. If, on the other hand, trips to Germany or Portugal yield more logistics companies, the job loss trend could continue, even with more companies locating in Peel.

A significant amount of money has already been spent on the project, with no guarantee of return unless businesses choose to expand to Brampton. In 2019, $1.87 million was allocated towards the implementation of the FDI strategy.

Since its May 2019 launch, the FDI strategy has had Mayor Brown, city councillors and staff visit destinations around the world to attend conferences and pitch the benefits of operating in Brampton to prospective businesses. The cost of these trips amounted to $361,749 in 2019, a figure expected to rise to $900,000 in 2020, according to the city’s FDI 2019 Summary Report and 2020 Work Plan.

In 2019, trips made by city officials abroad amounted to 13 potential candidates for partnerships and investments in Brampton. However, it’s unclear if any have actually followed through.

Clare Barnett, director of economic development and culture for the city, says success on a FDI trip is determined through a multi-year process. After the initial meeting, the city and prospective client build a relationship to determine if Brampton is the right place for the company to expand its business.

Last year, five trips were taken by city officials to the United States, Germany, Portugal, Turkey and Nigeria, of which two resulted in 2020 meetings to discuss future opportunities.

June and September conferences held in Toronto promise to bring leads to Ontario, enabling businesses to add Brampton to their itineraries, instead of making a separate trip for the occasion.

“These types of visits are typically the next step in the FDI process. During our FDI missions, we invite companies to visit us in our city and we prepare itineraries to showcase Brampton to them. Their visits indicate their interest in learning more about the opportunities to invest in Brampton,” the city told The Pointer.

Another way to draw foreign interest is to incentivize investment in a city through a tax break. This is a common practice for municipalities who want businesses to expand their operations. The City of Toronto offers financial incentives to businesses through the Imagination, Manufacturing, Innovation, Technology (IMIT) program, which provides grants of up to 60 percent of the increases in municipal taxes on eligible developments over a 10-year period.

One of Brampton’s existing business incentives is the Major Office Development Charge Exemption, which allows the city to waive its portion of development charges for qualified office projects.

Mayor Patrick Brown told The Pointer his goal is to make the city tax competitive. “If the tax break is significantly higher in Brampton on industry, that's going to be a disincentive,” the mayor said. Brampton wants to attract new investments to expand its revenue, create new jobs, and take some of the tax pressure off residents. “We have to change the imbalance between residential and employment if we’re going to become tax competitive and the reality is right now we’re at a disincentive on the taxation front,” Brown said.

However, there’s a problem with this approach. If, on one hand, Mayor Brown wishes to attract more tax-paying businesses to the city and collect more revenue in order to reduce the burden on residential ratepayers — who have been saddled with much of the burden for years — providing tax breaks to these companies as an incentive to come here seems counter intuitive. Many of these grant programs have long shelf lives, some last for as long as a decade, meaning any of the tax relief referred to by Brown could be years away.

Additionally, if Brampton is attracting big business to the city, but providing big tax breaks, it could actually have the opposite effect in the short term. If the city needs to build and maintain the infrastructure to support these new businesses, but are giving them tax breaks to open up shop here, it means that burden will fall to the existing taxpayers, the majority of whom are residential home owners.

For Brampton’s 2040 Vision — the city’s plan to create dense, walkable, transit-oriented complete communities — to be successful, attracting new businesses to fill office space and shift away from the automation sector is critical.

Funds for FDI trips cover everything from marketing to the expenses of city staff and officials. While overall costs for 2019 were provided in the city’s FDI Summary Report, figures did not provide insight into how much money each city official spent. Wards 3 and 4 Councillor Jeff Bowman inquired about this during a February council meeting.

“Nobody is aware how much is being spent on what… and they’re trying to figure out are trips worthwhile? I think for the interest of transparency for those people who are really interested in it, we should be providing that for them so they can see exactly what’s being spent,” Bowman said. In response, Denise McClure, senior manager for economic development, said those numbers can be released to councillors but whether or not they’re made public remains unseen.

In May 2019, the strategy was released by the economic development and culture department with a focus on four main pillars. The first pillar is asset development and investment readiness, which helped determined Brampton is ready to welcome new business. The second pillar is competitive analysis, which identified what makes Brampton unique. An example of this is the Rogers Cybersecure Catalyst, which will provide training and certification to cybersecurity professionals. The third pillar focused on marketing, including the “Brampton Means Business Now” campaign, which aims to educate potential clients about why the city is a great place to invest. The fourth pillar includes the “foreign direct investment pipeline,” a four step process that identifies qualified businesses for growth in Brampton.

There were no details around the trips to Nigeria and Turkey included in the report, given they weren’t organized by the city nor did they include city staff. Gurpreet Dhillon, chair of the economic development committee and regional councillor, was invited to the Canadian Trade and Investment Mission to Turkey conference by the Canada-Turkey Business Council, the cost for which was covered by money allocated for FDI trips by the city. Wards 7 and 8 Councillor Charmaine Williams had her trip to Nigeria covered by the Nigeria High Commission.

Dhillon provided an update on his trip to Turkey during a city council meeting on Feb. 5. He said, over the two-day conference, he met with businesses to discuss reasons to invest in Brampton, including the city’s young, educated workforce alongside proximity to Canada’s employment hubs. “I was able to connect directly with 12 IT related companies who specifically asked to meet with me off site and showed a keen interest in the opportunity to invest in Brampton,” he told council. A list of businesses he met with was provided to the economic development committee, which he is working with on the report.

“The inaugural year of the City’s FDI strategy was a success in raising Brampton’s profile as a competitive place to do business,” Barnett said, who wants to continue the momentum in 2020. There are four trips planned this year, including one to India, another to China and two to Europe. “This year, there will be an emphasis on business retention and expansion and working with existing businesses to increase foreign investment in Brampton,” Barnett said.

Brown has already been to India, the report for which is in the making. This year, three companies from India will be visiting Brampton.

On Twitter, Brown posted photos showcasing his meetings with businesses. He also promoted the startup visa program — a federal program that helps entrepreneurs come to Canada and start businesses — on the social media platform. During the Feb. 5 council meeting, Brown said this program has helped bring Toronto 215 startups. He said, as Toronto’s rental prices soar, Brampton can attract startups with more affordable office spaces. “There’s an opportunity where we can have [companies] realise their goals of being a startup in Canada but doing so in Brampton,” Brown said.