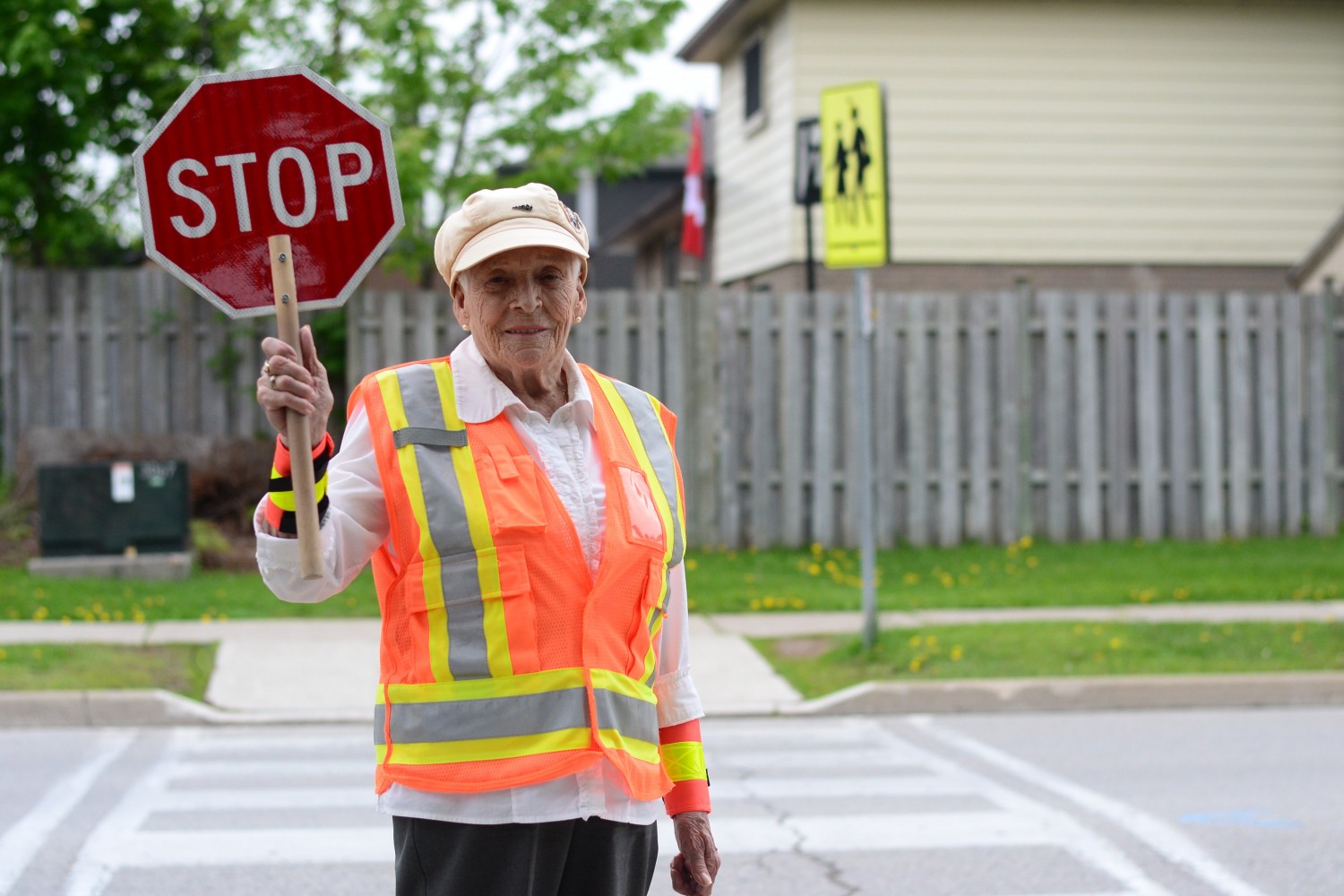 According to 2019 School Zone Safety Statistics from the Canadian Automobile Association, almost a quarter of drivers surveyed reported a collision or near collision in a school zone, with more than half involving a child. The same poll found speeding, distracted driving and illegal parking and stopping to be the three most frequent dangerous behaviours in Canadian school zones.

In 2018, 12,444 Provincial Offence Notices were issued in Brampton, including traffic charges, according to the Peel Regional Police (PRP). While it’s challenging for the PRP to pinpoint how many of these incidents took place in school zones, speeding continues to result in a significant number of injuries and fatalities.

However, patrols by City of Brampton bylaw officials show just how prevalent driving issues are in school zones. Between September and December of 2019, officials were present at schools 462 times, issuing a total of 246 tickets. The numbers vary across the city, with some schools appearing to have no safety issues when it comes to drop-off and pick-up of children, while others need serious improvement. The worst offender in the fall of 2019 was Burnt Elm Public School, which, during 24 different attendances by bylaw officers, saw 39 tickets issued. 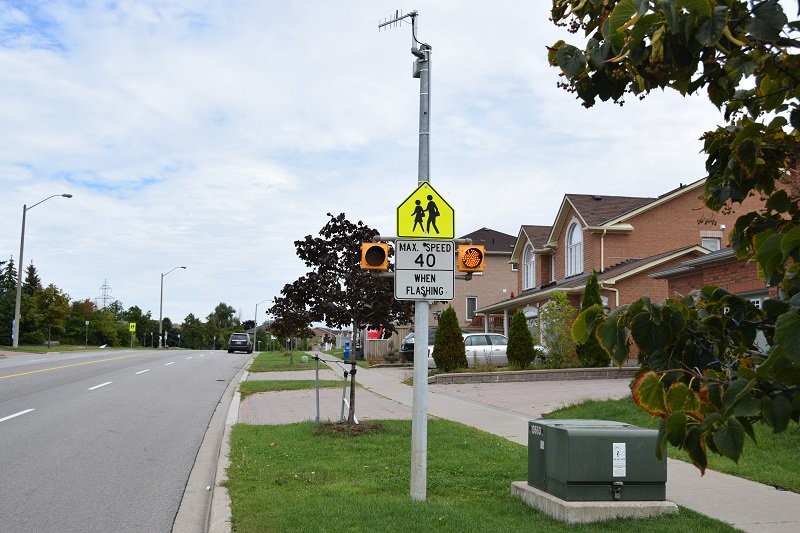 While it’s common for bylaw and police officers to conduct traffic blitzes to coincide with the start of the school year, sometimes these issues require much more significant attention. However, it’s unclear how well the city is handling such complaints.

In January, three Brampton school principals filed site inspection requests with the city. In her Jan. 23 request, Heather Little, principal of Thorndale Public School, reported that traffic-related issues were creating dangerous situations for students. “We recently closed our parking lot and kiss-and-ride at the end of the school day. Parents were parking where there were no posts, blocking the bus and fire lanes, encouraging students to walk between cars and driving very quickly,” the form states.

Little lists conversations on the issues as “ongoing for the last two years.” While the parking lot use changes have been well received by the school community, traffic issues are still ongoing. In response, the Brampton school traffic safety council (BSTSC) has observed traffic issues before and after school. A report including findings and recommendations to make the school safer will be presented at a BSTSC meeting on March 12.

Karen Naik, principal of Sir Wilfrid Laurier Public School, wrote in her inspection request that two accidents occurred in the school parking lot and multiple people were told about traffic issues, including Peter Bryson, a city enforcement supervisor and Kevin Minaker, manager of traffic operations and parking for Brampton.

The third site inspection request came from Kent Armstrong, principal of Jean Augustine Secondary School, which outlined concerns of traffic backlog and unsafe walking conditions for students. Since October 2019, the school has reached out to the city’s bylaw department and had conversations with a supervisor, actions which resulted in no changes, according to the request. But BSTSC has observed traffic at the school, the findings of which will be presented at the next meeting, alongside those of Thorndale Public School.

When not rectified, these issues can lead to dangerous and potentially fatal consequences. During pick-up and drop-off times, school zones can be a flurry of activity with cars and kids zipping in and out of one another. The hectic activity can lead to serious accidents. This was the case in Toronto in January 2018, when a five-year-old girl was killed after being struck by an SUV without a driver in it that had rolled and pinned her and her father against another vehicle.

Little is anticipated to change until dialogue surrounding traffic issues begins this month. “Inspections are underway and recommendations will be discussed at the March Brampton school traffic safety council committee meeting,” the city told The Pointer.

On Jan. 22, the city submitted a report detailing the results of site inspections at Brampton Centennial Secondary School and Bishop Francis Allen School for traffic congestion on school properties and streets in the surrounding area. The report notes drivers parked in the no stopping zone at Bishop Francis Allen School, with some leaving their vehicles unattended. One of the recommendations, which was approved during the Feb. 26 council meeting, called for the no stopping restriction to be enforced during the start and end of the school day. Each recommendation is subject to its own timeline and set of rules. “If by-laws need to be implemented for recommendations, such as ‘no u-turns,” this process could take up to 90 days as Council approval is required for the bylaw amendment. Following that, staff need to request utility locates to install the signs (if applicable),” the city said.

Between September and December 2019, 246 tickets were issued in 128 school zones around the city, according to school patrol statistics presented at the Jan. 16 committee meeting.

One thing the city has done is begin to install speed cameras on school roads. The Automated Speed Enforcement (ASE) system records drivers travelling over the speed limit, resulting in a speeding ticket being sent to the individual whose name is registered to the licence plate captured in video footage. Provincial legislation came into effect last December, “allowing municipalities to use ASE camera systems to enforce speeding offences in school zones and community safety zones on roads with a speed limit under 80km/h.” 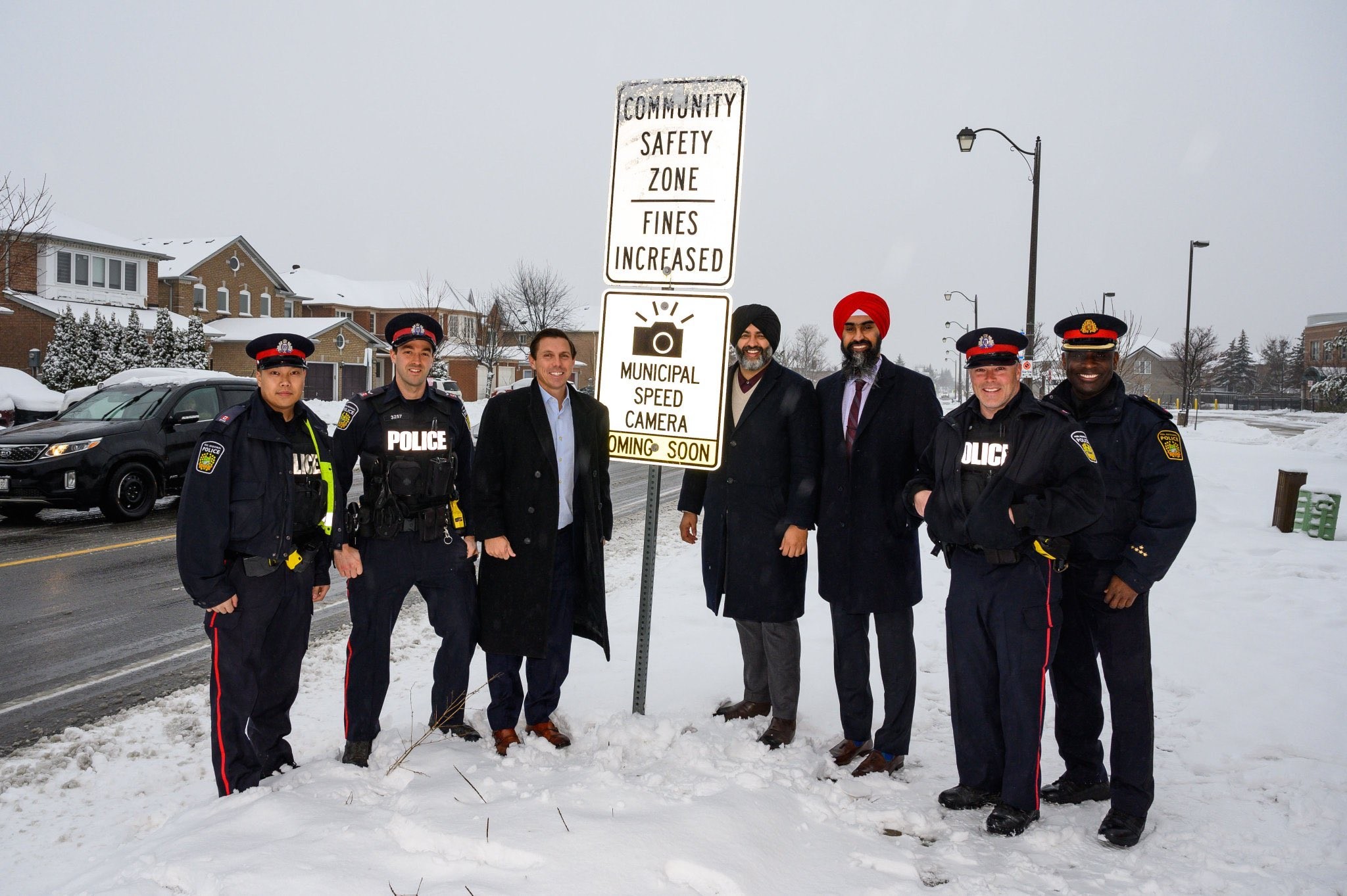 Before a camera is installed, a sign declaring its arrival must be present for 90 days prior to notify drivers of the change. “Brampton was one of the first municipalities in Ontario to implement ASE with its first notification sign unveiling on December 19, 2019,” the city told The Pointer. Five such signs have been installed in school zones in the city on Ray Lawson Boulevard, Avondale Boulevard, Richvale Drive, Fernforest Drive and Vodden Street.

An event was held to unveil an ASE sign in Ward 2, which is in close proximity to three schools. Mayor Patrick Brown joined city councillors and staff, school principals, PRP Chief Nishan Duraiappah and Fire Chief Bill Boyes for the unveiling. The first tickets can be expected in May or June 2020, once the notifications are over and the system is in place.

It remains to be seen if anything will change in areas of Brampton where there is no ASE. “Moving forward, where ASE is not present, Police will continue with traditional methods of speed enforcement,” the city said. However, speed enforcement officers aren’t always present in school zones. The PRP told The Pointer officers aren’t necessarily stationed in school zones but those areas are patrolled. Concerned residents can file a complaint with Peel police and ask for additional officers to patrol particular intersections in school zones.