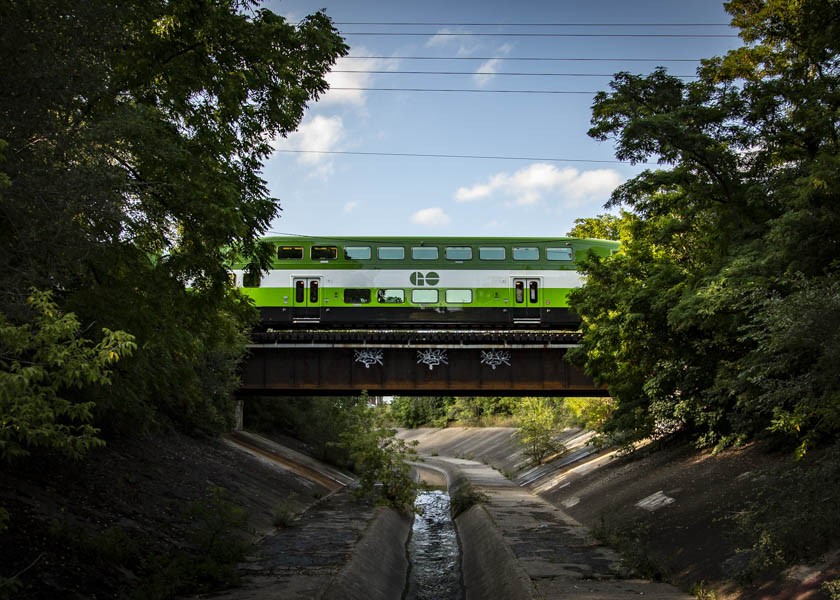 How two-way, all-day GO could be the key to Brampton's prosperous future

In Peel, light rail has been a hotly debated transit issue, with mixed success for its two cities. While Mississauga is months away from shovels entering the ground on its much-awaited Hurontario LRT, Brampton’s light rail ambitions have been something of a fiasco. Within the past five years, councillors have rejected a fully-funded route from the province only to decide they want it after all now that the offer is gone.

Away from the spotlight, Metrolinx, the region’s rail network operator, has been tweaking a less high-profile project: the Kitchener GO line. Since extending the route to Kitchener-Waterloo in 2011, service improvements on the commuter line have slowly taken place. 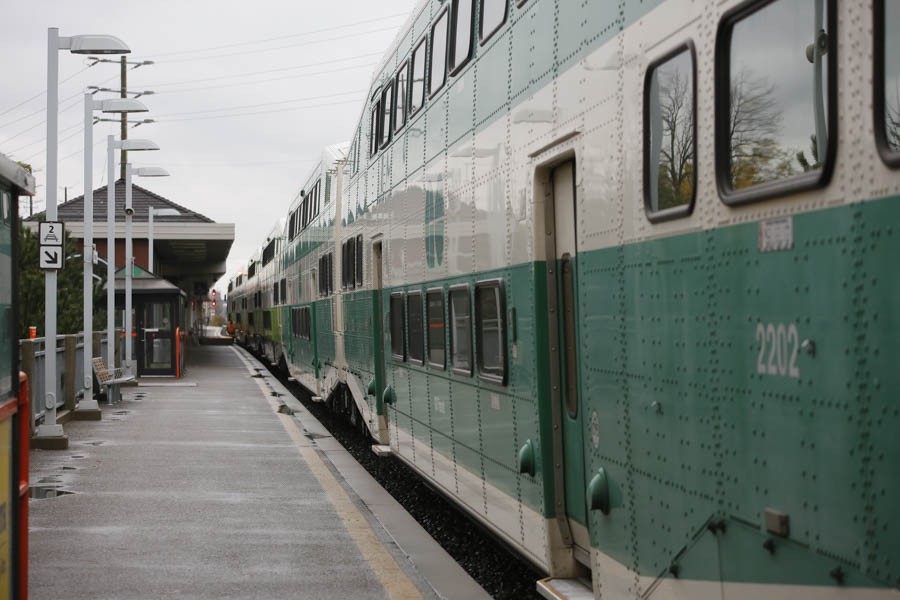 Despite these improvements, the route is far from perfect. According to Metrolinx’s timetables, the Kitchener line remains significantly underserved. On weekdays, the first train leaves Toronto’s Union Station at 8:55 a.m., terminating at Mount Pleasant in Brampton at 9:44 a.m. Trains then operate out of Union roughly every hour until the 4 p.m. rush hour when more are laid on. In the other direction, services start earlier into Toronto and continue regularly, drying up dramatically in the afternoon with no services leaving Brampton between 4 and 8 p.m., which is the height of the commuting period.

These gaps in the timetable are a major barrier to travel on the Kitchener Line, something that would significantly increase with a more reliable schedule. Ridership data between April and December 2019, when six off peak daily trips were added to the line, shows how better service leads to higher ridership.

Boardings at Mount Pleasant in Brampton rose 6.6 percent (to 3,500 daily riders) as a result of the change, while Brampton’s boardings rose 3.9 percent to 2,500. Bramalea saw a slight drop in ridership (-1.1 percent) with the caveat it is under construction, while Malton saw a 10.7 percent rise to 1,300 daily riders. While ridership data for these stations is low, it makes up almost 80 percent of the Kitchener Line’s passengers, showing how important the route is to residents in Brampton and Malton. Not only this, but how game-changing increased service will be. 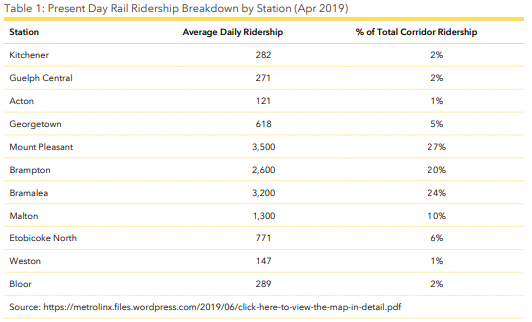 Travel statistics along the Kitchener Line from before recent ridership increases were measured.

Metrolinx is in the midst of preparing a slightly confusing plan to provide two-way, all-day GO. The issue is complicated by track ownership, since the route is not entirely Metrolinx’s to control. For Bramalea and Malton, the service is guaranteed, even in a business as usual scenario. Metrolinx says the delivery date will depend on the construction bids it receives.

For downtown Brampton and Mount Pleasant, a complicated negotiation with CN Rail (or expensive construction of a new freight corridor) will determine when two-way, all-day service is delivered. 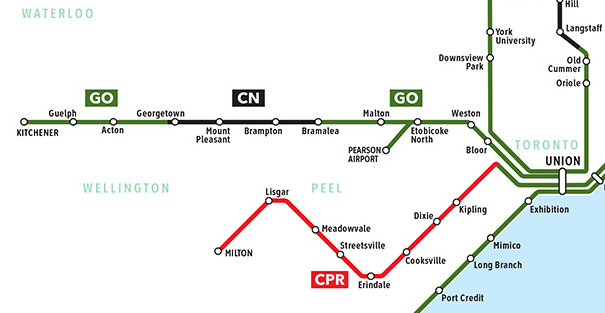 Exactly how long it takes for Metrolinx to complete its two-way, all-day plans is yet to be determined. In 2015, a business case was written for constructing a freight bypass IBI Group on behalf of the cities of Mississauga and Cambridge, but not moved forward by Metrolinx. Another business case, penned by the transit body itself, was published in November 2019 to negotiate increased capacity from CN. However, the transit body appears committed to network expansion, bringing regional transit connectivity to Brampton and under-served Malton far ahead of anything the Hurontario LRT has promised.

“We are working to get two-way all-day service as soon as possible and adding new service incrementally every year as new infrastructure is built,” Nitish Bissonauth, a spokesperson for Metrolinx, told The Pointer. “We are focussed on strengthening our relationships with our freight partners and working as hard as we can to bring more service to the Kitchener corridor as quickly as possible.”

“The Kitchener GO expansion will transform the line into a true frequent rapid transit experience,” he added. “There will be more trips at every point along the line – better connecting Kitchener-Waterloo, Guelph, Halton Hills, Brampton, Mississauga, and Toronto. GO Expansion will make the network faster and the region easier to travel in.”

In Mississauga, Malton is a unique part of the city, historically forgotten by authorities and isolated by its geography. As glass towers have sprung up in the city centre and major projects have been approved along the waterfront, the area has struggled with crime, leading to plans to reopen its community police station. Cut-off from the rest of the city by Toronto Pearson Airport and extensive industrial zoning, it was the scene of a shooting in September 2019, capturing national headlines. 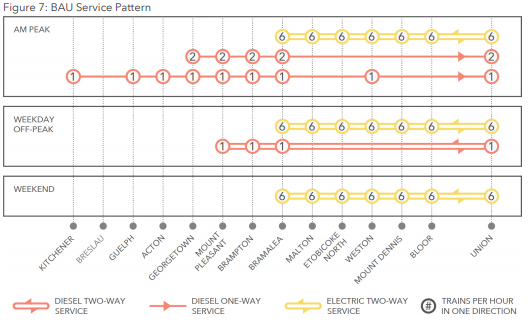 Business as usual planning for the Kitchener Line promises trains every 10 minutes between Union Station, Malton and Bramalea.

Malton has a large number of new arrivals due to its proximity to the airport and a relatively transient population. According to the census, 59.9 percent of its residents are immigrants and 82.5 identify as visible minorities. While the Hurontario LRT will bring major residential and commercial development to the north-south street and its intersections, it will bring little investment to Malton.

Instead, the Kitchener Line’s expansion could offer the area similar growth opportunities. A bustling and regular commuter rail network linking to three areas in Brampton, the airport via Weston Station and downtown Toronto would create an opportunity for developers in the area to invest in commercial and residential projects, safe in the knowledge the area is connected to the region as a whole.

“All day GO through Malton is what we should all be striving for,” Ward 5 Councillor Carolyn Parrish told The Pointer. Listing low-density commercial and industrial lots around the station, Parrish highlighted the need for affordable housing in the area. This is something inclusionary zoning could allow in proximity to a GO station. “Available land is in extremely short supply in Malton, being boxed in by major roadways, filled with massive trucks shipping goods in and out of the airport and the airport complex itself. These locations around the GO hub would be filled with residents the moment they were built.”

The line could be at the heart of reversing the area's isolation and a lack of transit connections.

For Bramalea, where its GO station is more than 4 kilometres from the town centre, the same is possible. The area around the GO station, beside Highway 407, is low density and parking-dominated. A lack of density around downtown Brampton GO and Mount Pleasant GO, which are not expecting electric two-way, all-day trains in the near future, but should see service improvements, is also an issue. 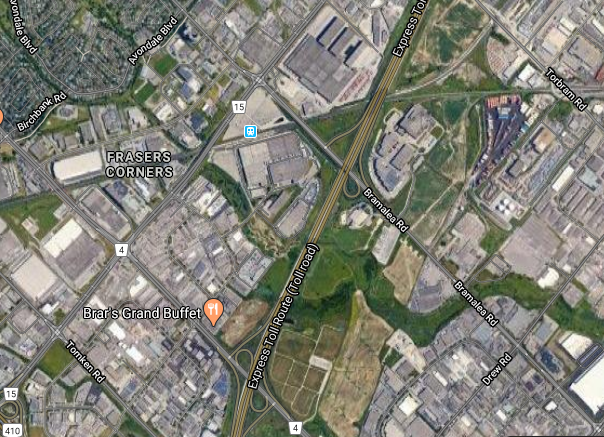 An aerial view of Bramalea GO, showing room for growth and intensification.

Yet, in Malton and Brampton as a whole, there seems to be little urgency around potential improvements the Kitchener Line can bring without the costs of a new LRT.

A spokesperson for the City of Mississauga confirmed to The Pointer it is supportive of the Kitchener Expansion, but offered few additional details. “We will be working cooperatively with Metrolinx to ensure MiWay services are integrated with GO services,” the spokesperson added.

In Brampton, for all the noise coming out of city hall about BramptonU, rail infrastructure appears to have been ignored. City hall did include the project in its pre-budget submission. However, the media release circulated to promote the submission focused on the (unfunded) Hurontario-Main LRT instead of Kitchener GO.

A screenshot of the media release shared by Brampton regarding its pre-budget submission.

A spokesperson for the City of Brampton explained it was preparing for all-day, two way GO behind the scenes. “The city has long been advocating for this service as it will support economic growth, job creation and development,” the city stated. To take advantage of the new service, the city has plans to construct a mobility hub at Bramalea Station.

“A land use study has been completed for the Bramalea Mobility Hub that recommended the highest densities and office uses for lands around the Bramalea-Steeles intersection, and a mix of office and prestige industrial uses within the adjacent areas,” the city added. “As next steps, a comprehensive Mobility Hub Master Plan will be undertaken for the area, which will guide the planning for land use, distribution of density and built form. The Master Plan will also develop a street network that optimizes access to and from the GO station, providing improved pedestrian connectivity and a high quality design of the built form and streetscape.”

This attention is not reflected in the city’s 2040 Vision. The document, created for the city by renowned urban planner Larry Beasley, illustrates the walkable, dense city Brampton aims to be in the next two decades. It is at the heart of work to amend the city’s current Official Plan.

The document appears to have been planned around the Hurontario LRT and an upcoming Bus Rapid Transit corridor along Queen Street, not the regional potential of the GO network.

The Uptown, for example, is situated near Highway 407 and Hurontario Street. This connects the area to the planned LRT, but leaves it nowhere near a GO train. Its location means potential residents and workers in a future Uptown could easily commute the length of Mississauga by transit, but would have no easy access to Toronto nor the rest of the region. 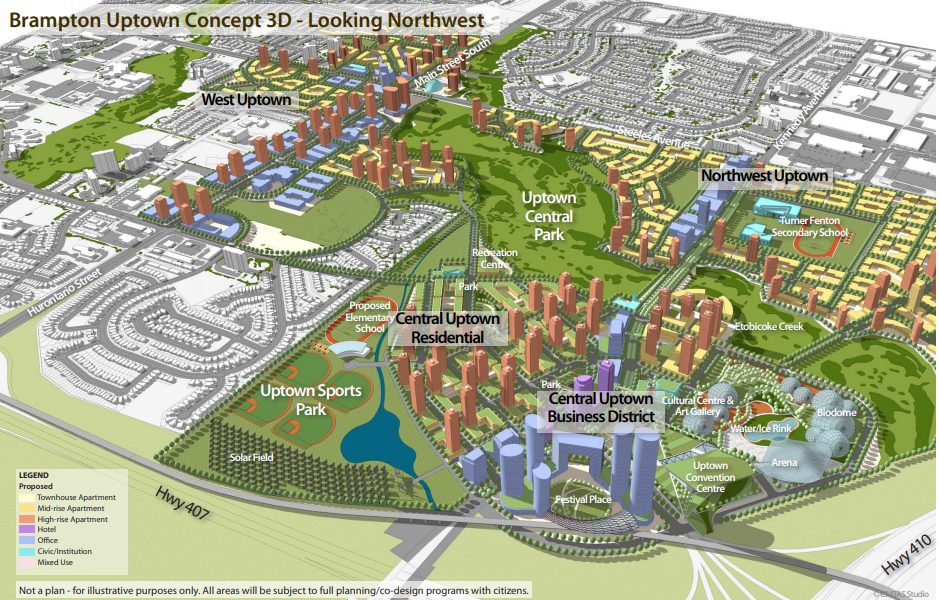 The Brampton 2040 Vision shows height and density in the uptown, far away from the city's GO stations. 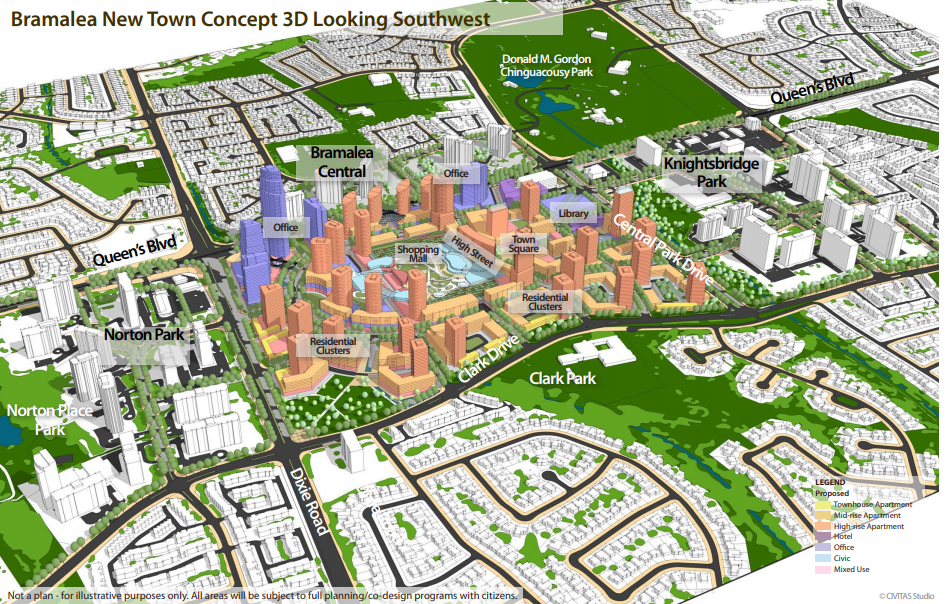 Pamela Blais, an urban planner who focuses on integrating environmental and economic factors into analysis of city issues, told The Pointer the Kitchener Line is a key part of Brampton’s future growth, something council should be lobbying for as a top priority. “Making sure that the planning and the land use designation[s] take advantage of [the GO Line], that’s where you should put the highest density,” she said.

For Blais, the key to creating the level of job growth, economic prosperity and density Brampton wants in its 2040 Vision is to draw upon a force of workers from across the Greater Golden Horseshoe. “Access to a regional labour force [is vital], the scale of ambition in 2040 [...] means you have to tap the regional labour market just to support the scale,” she explained. “You can’t do that from within Brampton or even locally.”

In Brampton, there’s the danger the city’s 2040 plan is built around aspirations for dense and walkable communities instead of the potential offered by underutilized infrastructure that already exists.

The city depicted in the plan is a cyclist and pedestrian-friendly mecca, but is it rooted in hope or viable economic planning?

“You have to focus on the third category and then figure out what those right things are [...] part of that is being really smart about where you put the transit, basically making sure transit is able to tap regional labour markets because that’s what will draw the business and employers of the kind that they need to build the towers [Brampton wants]. And then there’s an economic development piece that needs to be really closely integrated with that [...] and I don’t think that’s been done, leveraging hospitals, community colleges, higher education institutions and really building on what they have.”

As Doug Ford demonstrated in his 2019 announcement of the Ontario Line for Toronto, new transit infrastructure announcements are something all politicians want to be at the forefront of. The premier is just one of hundreds of Ontarian politicians keen to situate themselves next to big proclamations, with fewer interested in improving what is already there. 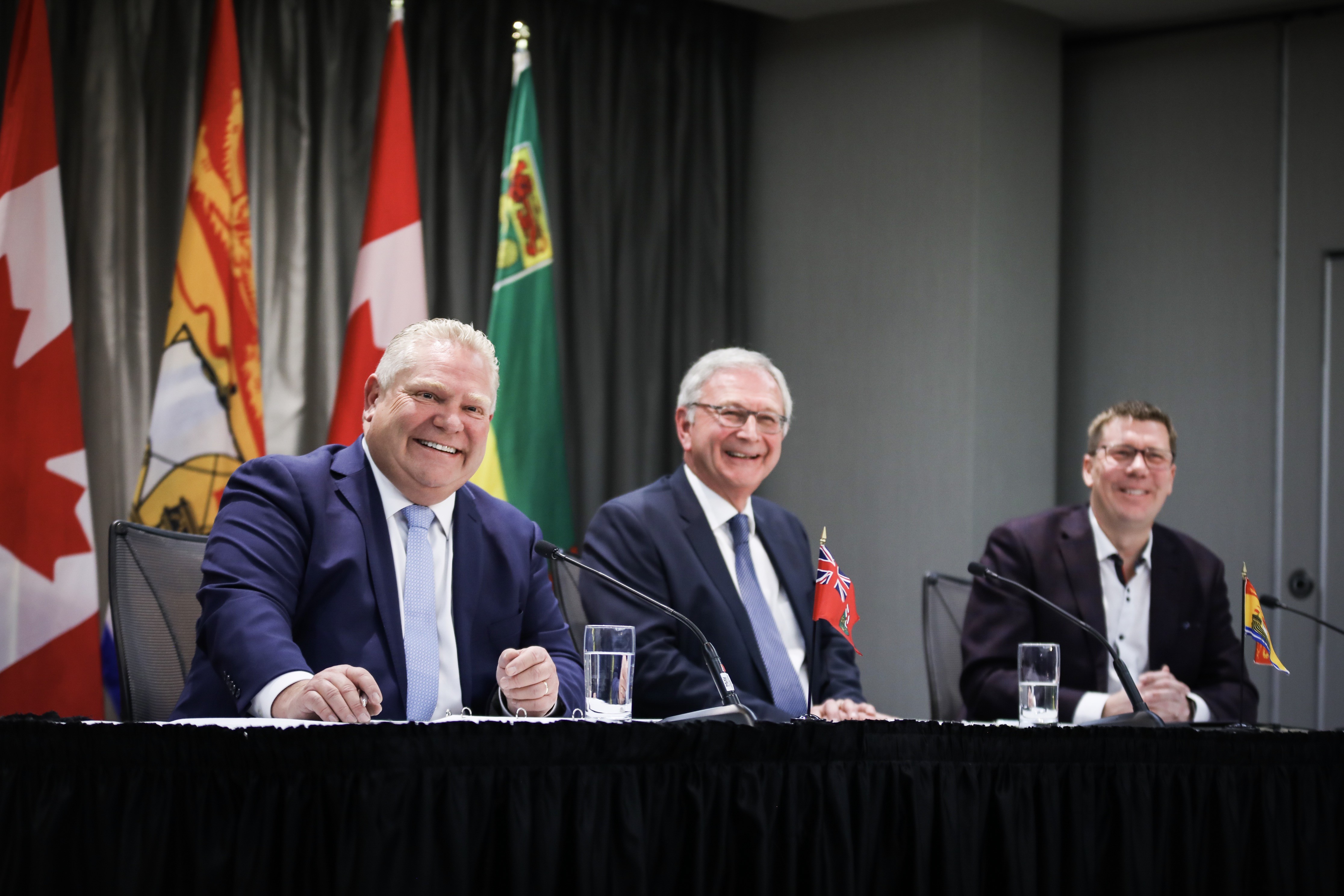 The potential benefit to Malton, Bramalea, downtown and Mount Pleasant with each new train added to the Kitchener Line is undeniable. Together, the four Peel stations make up the vast majority of the route’s ridership, also linking some of the area’s more industrial and under-developed neighbourhoods with the cities of Waterloo and Toronto.

If both cities can plan with this potential in mind, the economic opportunities for growth, density and change it offers could be limitless.