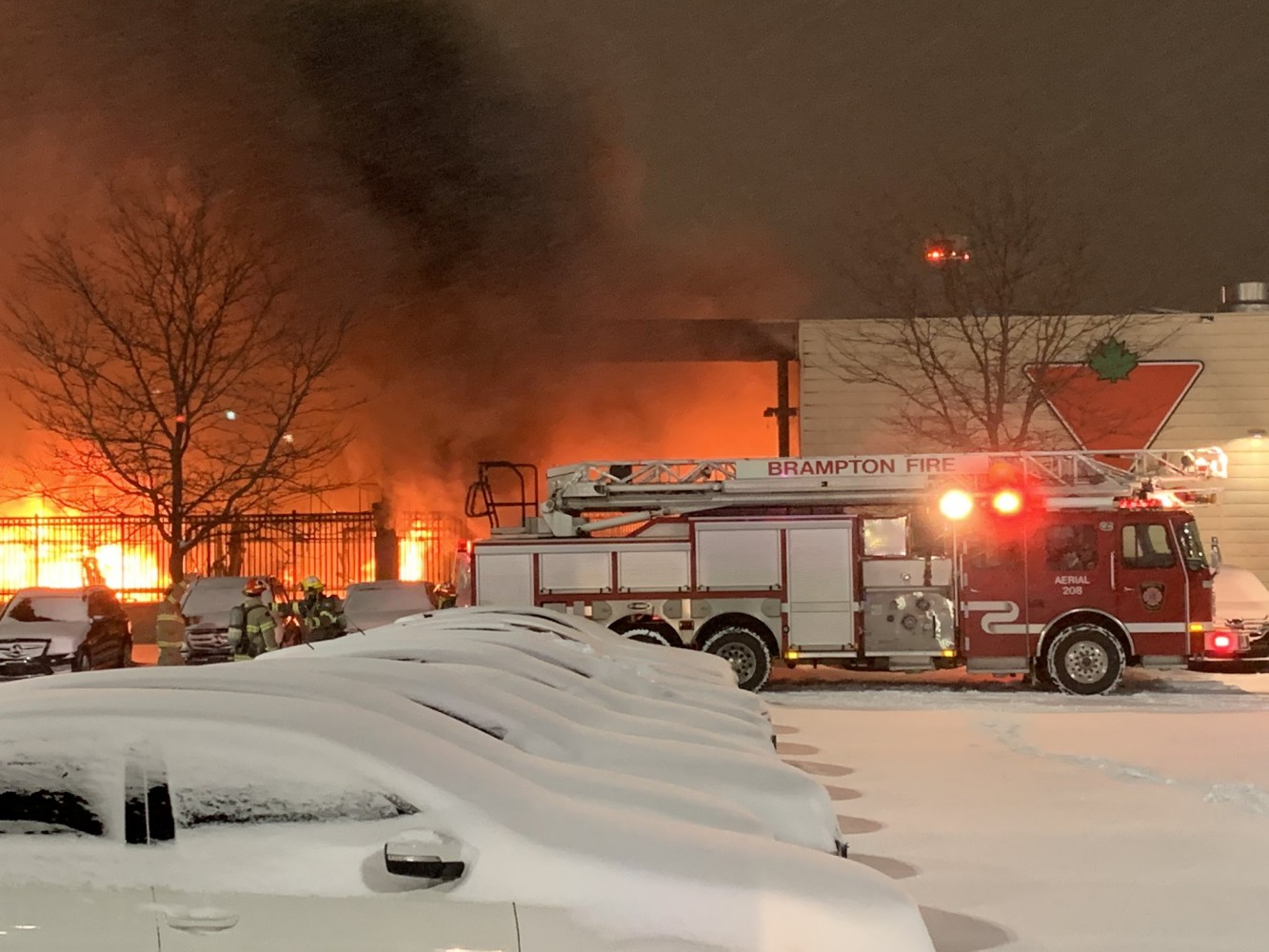 Firefighters are used to change.

They fight off one of the most unpredictable enemies in nature – modern blazes that burn faster and hotter, fuelled by cheap construction products. Our penchant for cheap plastic and particle board furniture acts as an accelerant to a fledgling fire. These professionals constantly need training to learn and adapt to the ever-changing roles this unique career requires.

In Brampton, firefighters face an even greater shift – the city they are tasked with keeping safe is in a constant state of flux. 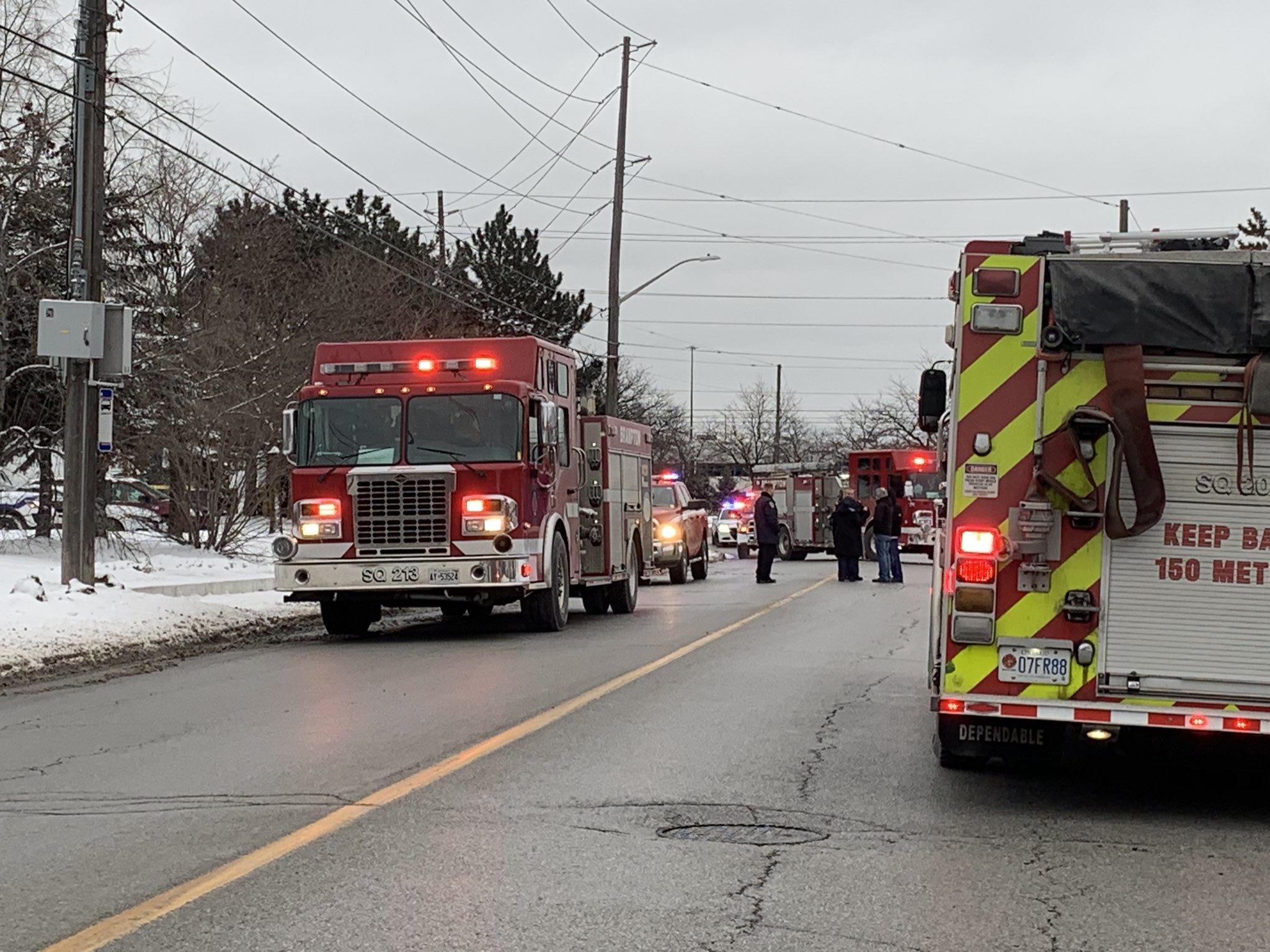 Brampton Fire and Emergency Services needs to start thinking differently about how it services the city. Staff and city council also need to change the way they think about funding this vital organization.

As the fifth largest fire department in Ontario, Brampton Fire operated with a nearly $65-million budget in 2018. According to the initial 2017-19 projections budget for fire and emergency services, that number was expected to inflate to $70.1 million for 2019. The projection came up short and the city had to pay $77.8 million to last year’s operating budget. The cost this year: more than $80 million. The lion’s share of that funding (nearly 96 percent) is firefighter salaries. While many residents take issue with the pay increase for bureaucrats at city hall ($12.4 millions more for city staff salaries in 2020), few will argue that high salaries for firefighters and police officers are unwarranted due to the high risks associated with the jobs.

However, it raises a problem for the coffers of a growing city. Brampton Fire’s budget is shucking projections and has increased 33 percent since 2016. Plus, the city hasn’t stopped getting bigger and won’t anytime soon. As the municipality expands and develops, more stations and personnel will be needed to battle the increase of fires. Unless the city can come up with added revenue to pay for these positions, the fire services budget will become unsustainable.

“The Fire Department budget is very reflective to a growing department as Brampton continues to grow. It requires additional services across our department,” says Paul Lecompte, president of the Brampton Professional Fire Fighters Association. “It requires that we stay ahead of the curve with our Fire Prevention and Fire Life Safety Education divisions, as well as making sure we have the adequate staffing requirements to serve our city.”

According to the city’s finance staffers, they are counting on the additional revenue from growth — more homes and people means more tax dollars to help cover the cost of fire service expansion.

“The City plans to manage the growing cost of fire protection services by adding resources in line with where and when development occurs in the City,” reads an emailed response from the city.

Plans are already in the works to increase the number of Brampton fire stations. Currently, the city has 13 with two more in the works. Smart planning for future stations is not only essential for the fire service to maintain adequate response times, but it can also help save the municipality cash.

For example, the future Fire Station 214, to be located on Bovaird Drive West at a cost of $10.1 million, will be shared with Peel Regional Paramedic Services. The Region of Peel will foot a quarter of the bill in order to do so. The region’s financial assistance will be a welcome addition to the city’s bottom line as the reserve dollars Brampton is relying upon to fund the station (the fire protection development charge reserve) have been sinking further into the red since 2017.

At that time, the reserve was owed $11.7 million, and by the third quarter of 2019, the debt had increased 41 percent to more than $16.5 million. The city is also relying on reserve funding to help pay for the upcoming Fire Station 215, to be located in northeast Brampton. While the asset replacement reserve being used for this project — more details are set to be presented to council later this year — is still in the black at $17.6 million, it was sliced in half in 2019, dropping to current levels from more than $36.4 million at the end of 2018. 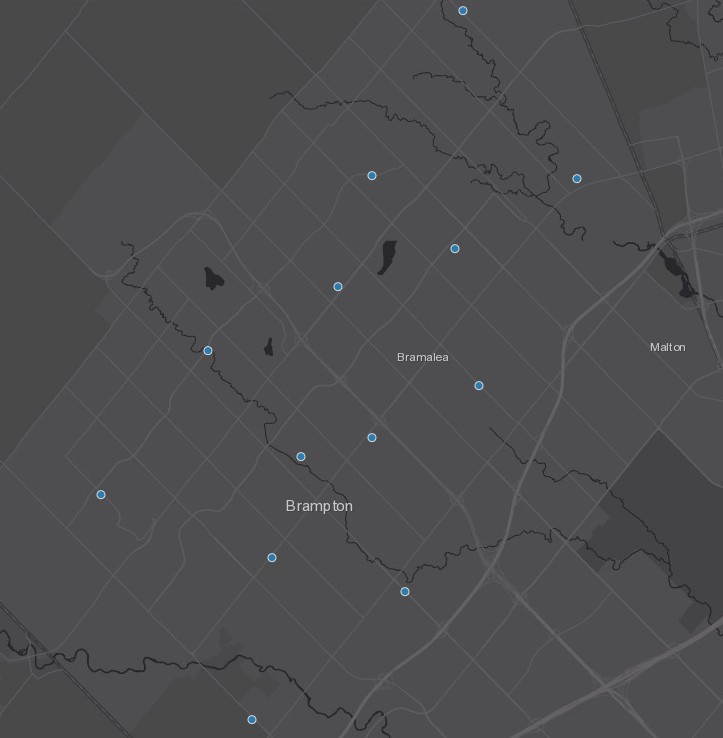 A map showing the locations of Brampton's existing fire stations

Relying on reserves to pay for big capital projects is nothing new for municipalities. In the same way there’s nothing wrong with saving for a new home or a car, it is harmless, as long as the money is being put back into the savings account to rejuvenate it over time.

If not, it’s simply not sustainable.

In Brampton’s case, 2017 was the last year the city’s reserve accounts saw a healthy increase year-over-year. The city’s reserve accounts grew from a total of $563.5 million to $580.4 million at the end of 2018. However, by the third quarter of 2019, the overall total had been slashed by more than $100 million. It’s no coincidence the reserves saw a healthy hit in 2019 following Mayor Patrick Brown and council’s tax freeze. There were still projects that needed to be paid for and without the additional tax revenue, it created a problem: where would that money come from? Raiding reserves was the answer.

City staff told The Pointer in 2019, “Projected funding from Development Charges (DC) related to Fire and Emergency Services has been used up. Growth for new fire stations will require funding from tax-based funding sources on an annual basis, subject to future DC reviews.” Meaning: new funding sources will need to be found unless taxpayers foot the bill.

In 2020, councillors are increasing the reserve contributions from 2019 — putting approximately $116 million back into savings. But one year does not create a trend, and if the city hopes to pay for future projects, like fire stations, it will need to ensure these reserves stay healthy.

Putting finances aside, there are other ways to ensure the city remains safe, while keeping the Brampton Fire budget sustainable. If the city is able to reduce the number of fires, it could not only save lives, but also balance future investment and ease pressure on the budget.

It’s a task that fire departments across the world have grappled with for decades. Today, more often than not, emphasis is placed on the education aspect of a firefighter’s job. Fire Chief Bill Boyes previously told The Pointer he tells all of his new recruits that educating the public is the foundation of their role in the city. 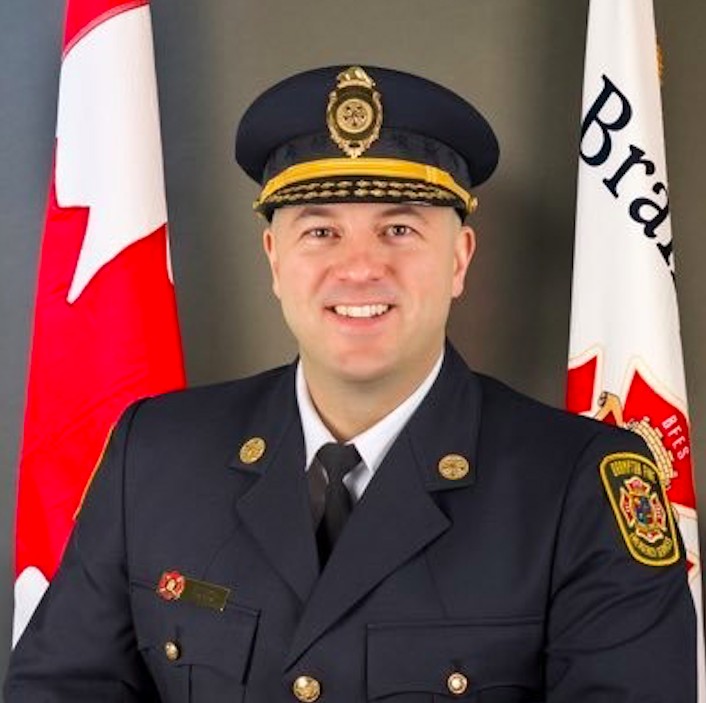 One initiative appears to be seeing success in reducing flames in previously fire-prone areas of the city, which is a blessing for a service doing its best to improve its already below standard response times.

Under the National Fire Protection Association standards, known in the business as NFPA 1710 guidelines, fire departments are meant to have a complete response to a call. That standard includes fire suppression, medical, and special operations — within 384 seconds, 90 percent of the time. In Brampton, the fire department is reaching the standard only 78 percent of the time, a slight improvement from recent years when it hovered in the mid-70s. The city has also added more firefighters to its service over the past three years. None are proposed to be added this year.

“This reflects the department’s ability to maintain service levels while keeping pace with growth. Furthermore, the additional firefighters were a critical component in improved effective response force times when responding to fires as each of these net-new crews were allocated to stations which were once one-truck stations,” the city stated.

There are many factors hindering Brampton’s efforts. These include the distance between existing fire stations and the challenge traffic poses in getting to newer developments in the city’s north end. Just like residents who travel on congested roads, fire departments must do the same. While flashing lights and blaring sirens help clear the way, there’s still a degree of caution and slowing down in order to arrive safely to an emergency.

Data analysis through the city’s “hot zone” program has helped identify areas that local firefighters are travelling to more frequently than others. The study found three particularly “hot zones” for fires: the Armbro Heights neighbourhood (77 fires since 2012), the City Centre area (95) and Brampton West (75). Between 30 and 40 percent were the result of unattended cooking. That statistic provides a cue for Brampton Fire to concentrate its public education in those neighbourhoods on reminding people not to leave the kitchen while cooking. It appears to be working. 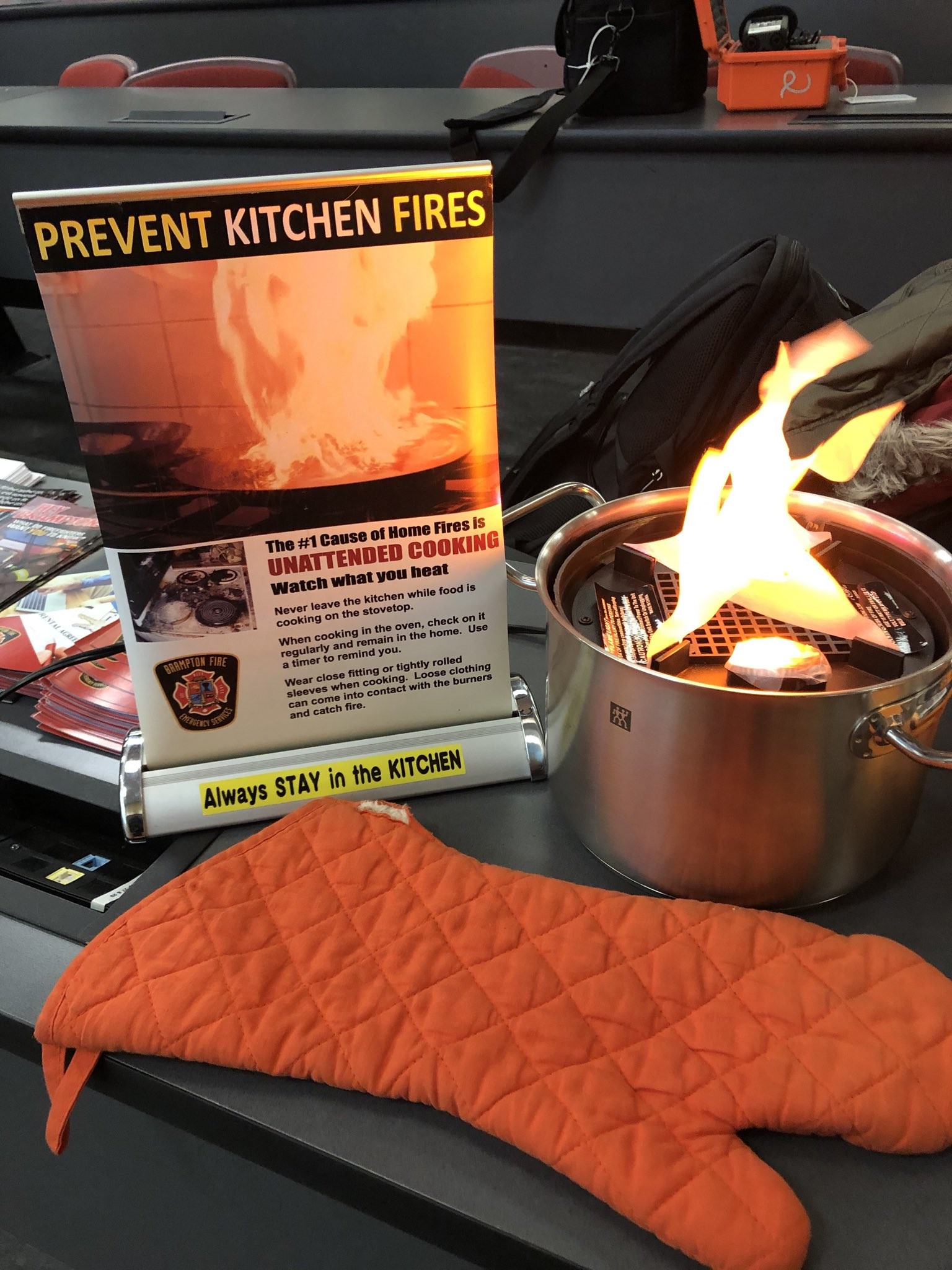 “We’re already noticing a reduction in fires in those areas after the first two years,” Chief Boyes told councillors last week. In 2020, Brampton Fire plans to hire a new division chief, in part, to help expand the hot zones program to other areas of the city and provide more direct and impactful education programming.

Last year saw the first reduction in emergency response calls for Brampton Fire in close to six years. Annual calls have risen by more than 20 percent since 2014 – from 20,478 to 24,745 in just four years. In 2019, the fire service responded to 22,117 emergency incidents.

However, these incidents are always changing, not only with faster, hotter burning fires, but also with entirely new circumstances for firefighters to grapple with. For example, the opioid crisis has firefighters carrying naloxone kits — the overdose reversal drug. It was used as recently as December of last year when firefighters saved a man who overdosed inside in a Brampton Tim Hortons.

Additionally, Brampton firefighters have to deal with the prevalence of illegal secondary suites, which pose a new danger from structural flaws in the home to not knowing how many people actually reside in the house. According to reports, there have been 32 fires in illegal basement apartments over the last three years, leading to five injuries and two deaths with the most recent in April 2019.

All of this emphasizes the importance of ensuring firefighters are well-trained to deal with and adapt to all kinds of emergency situations –  even those they may not always face. With Brampton putting more emphasis on dense, high-rise development, it means future firefighters will need to know how to tackle a blaze in such a building. Previously, Brampton sent its firefighters to a variety of locations across the province to receive expensive training.

The department officially broke ground last year on its new fire training campus at the site of Fire Station 203 on Chrysler Drive. Once completed, the campus will include the existing burn tower, an area for confined-space training, an auto extrication area, hazmat area and a driving course. 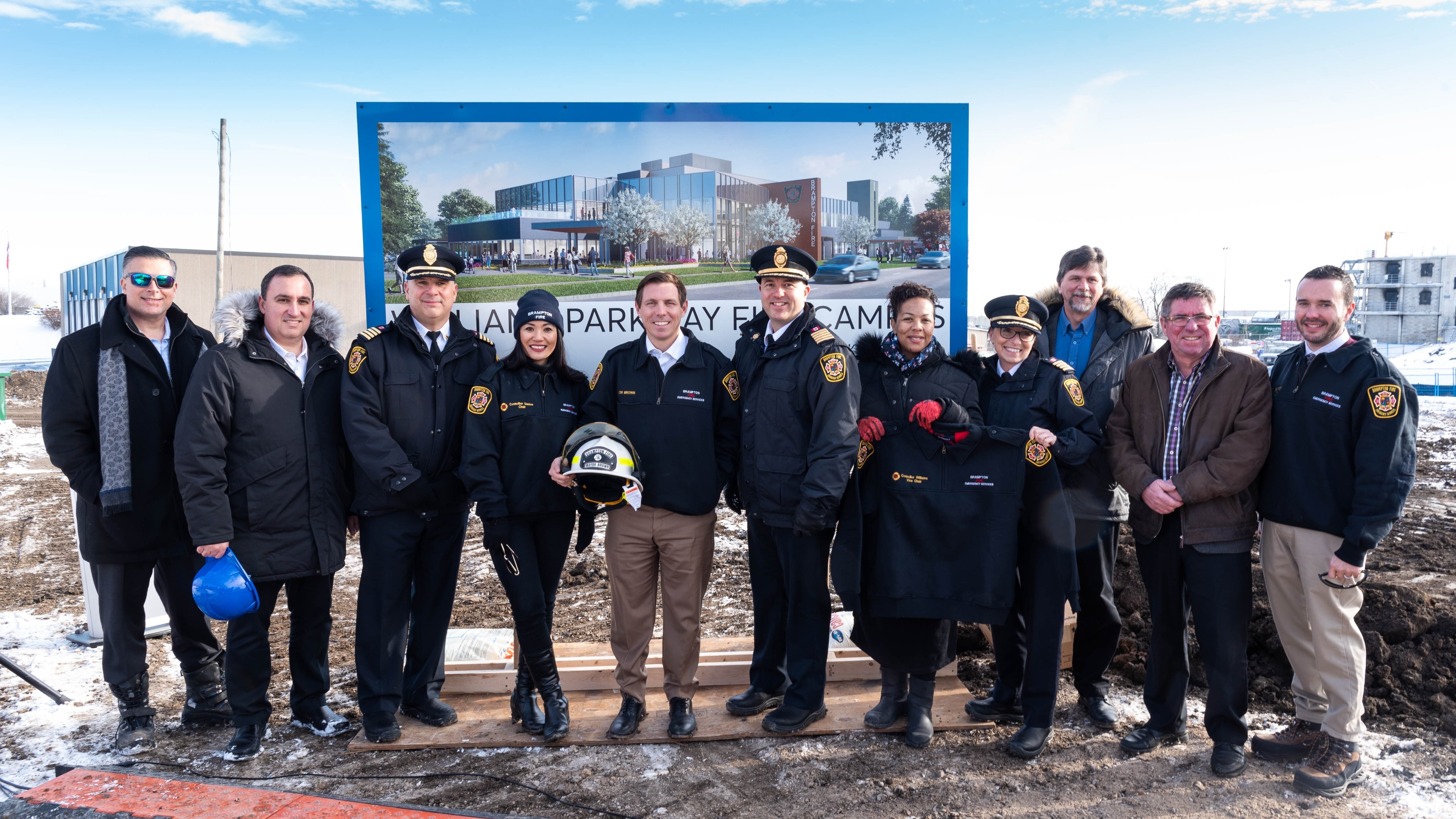 “It’s going to be an area where we can house all of our training activities,” Boyes told The Pointer. “It will really be important to centralize our operations and help us prepare for the future and allow us to really be that future-ready facility and operation.”

The new campus comes with a hefty price tag: $47 million. The city doesn’t expect to pay it off until 2043.

Residents will get a closer look at how Brampton Fire is preparing for the future as a new fire and emergency master plan is set to go before council in the second quarter of 2020.

The previous version of the plan does not appear on the city’s website. The Pointer has inquired about its absence but received no response.

The document will be the first time in years the city’s fire department lays out in detail how it plans to adapt to the growth and associated challenges ahead.