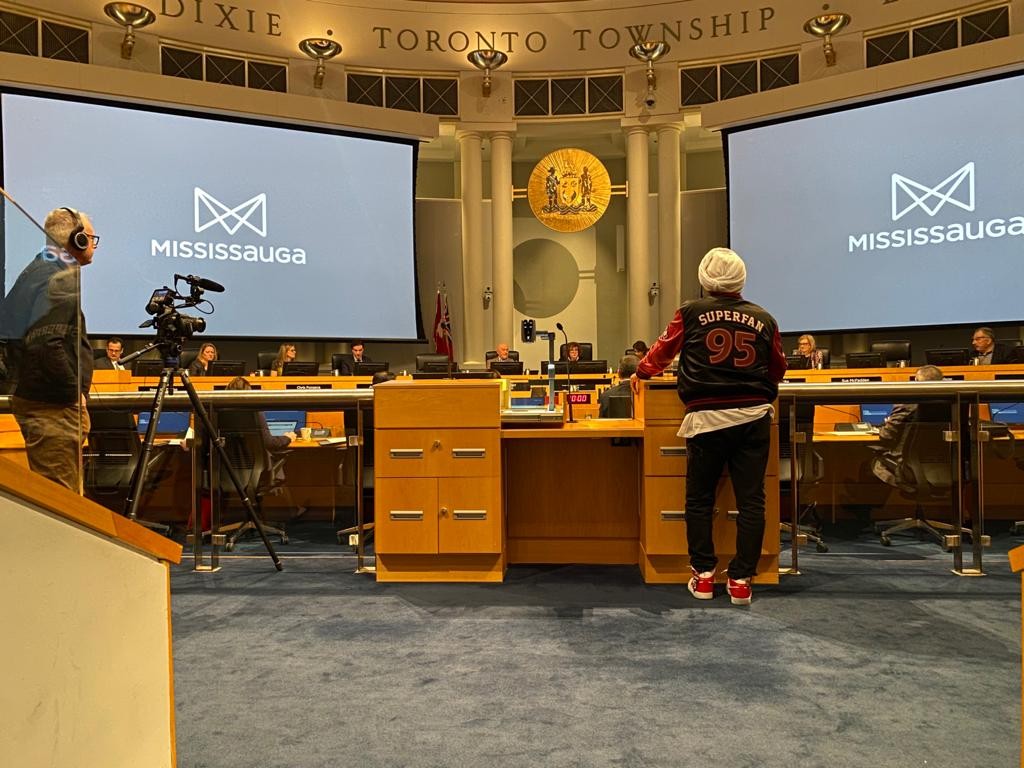 Photos from The Pointer files/Twitter/Carolyn Parrish

With new projects underway, the long-ignored community of Malton gears up to make its presence known

Back in January, 13-foot high letters spelling out ‘MALTON’ (with a heart in place of the O) were installed in Paul Coffey Park, right by the Avro CF-100 monument off Derry Road. The letters are large enough that pilots can make them out from the air as they prepare to touch down at neighbouring Toronto Pearson International Airport.

While there’s not much else around the letters, there are plans to install seating. 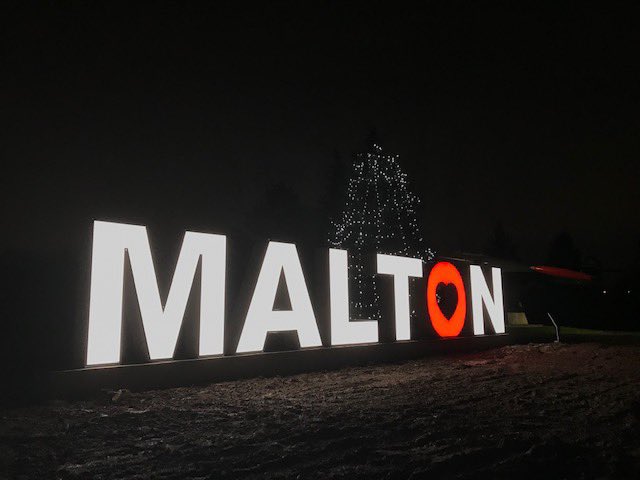 Like municipalities that have installed equivalent signage, Malton hopes the new display will serve as an iconic civic landmark, the latest phase in a strategy to rebrand and refresh a neighbourhood it says has long been overlooked.

Another project to benefit the neighbourhood was made public to great fanfare this week: a wholesale renovation of the park’s dilapidated basketball courts, made possible by a partnership between the city and local legend Nav Bhatia.

'Superfan' Nav Bhatia stands with a $150,000 cheque that will go towards the development of new basketball courts

From the moment Bhatia arrived in council chambers Wednesday to formally announce the agreement, the Toronto Raptors’ “Superfan” was the object of attention, not only from star-stuck city councillors but 100 or so students from Ascension Secondary School bussed to city hall to celebrate the announcement.

Councillors and students alike wasted little time posing for photos with Bhatia, who was wearing his bediamonded championship ring for the occasion, gifted to him by the team following the Raptors’ historic title run.

Through his charitable foundation, Bhatia — the beloved Raptors season ticket holder who can count the likes of Lebron James and Vince Carter as friends — will team up with the city to redevelop the park’s outdoor courts, promising to transform them into world-class playing surfaces for the basketball-ravenous youth in the area.

“I came with nothing to this country,” said Bhatia, who lived in Malton for 10 years after immigrating to Canada. “A few years ago, I felt it was time to give back to the community. We’ve established a foundation and hopefully, God willingly, there will be many more [projects] to come.”

The court renovation is a win-win city-building project, which results in tangible gains while requiring a relatively modest investment of public monies to complete, say councillors.

Under the terms of the agreement, Bhatia’s charitable foundation will contribute $150,000 towards development of the new courts, with the city kicking in the same amount, which will pay for refurbished courts plus covered seating areas.

Construction is scheduled to begin this spring, and Bhatia has already pledged to hold summer basketball camps there and maybe even invite some of his NBA contacts to take part.

The court redevelopment is part of some $40 million in planned long-term upgrades to Paul Coffey Park. 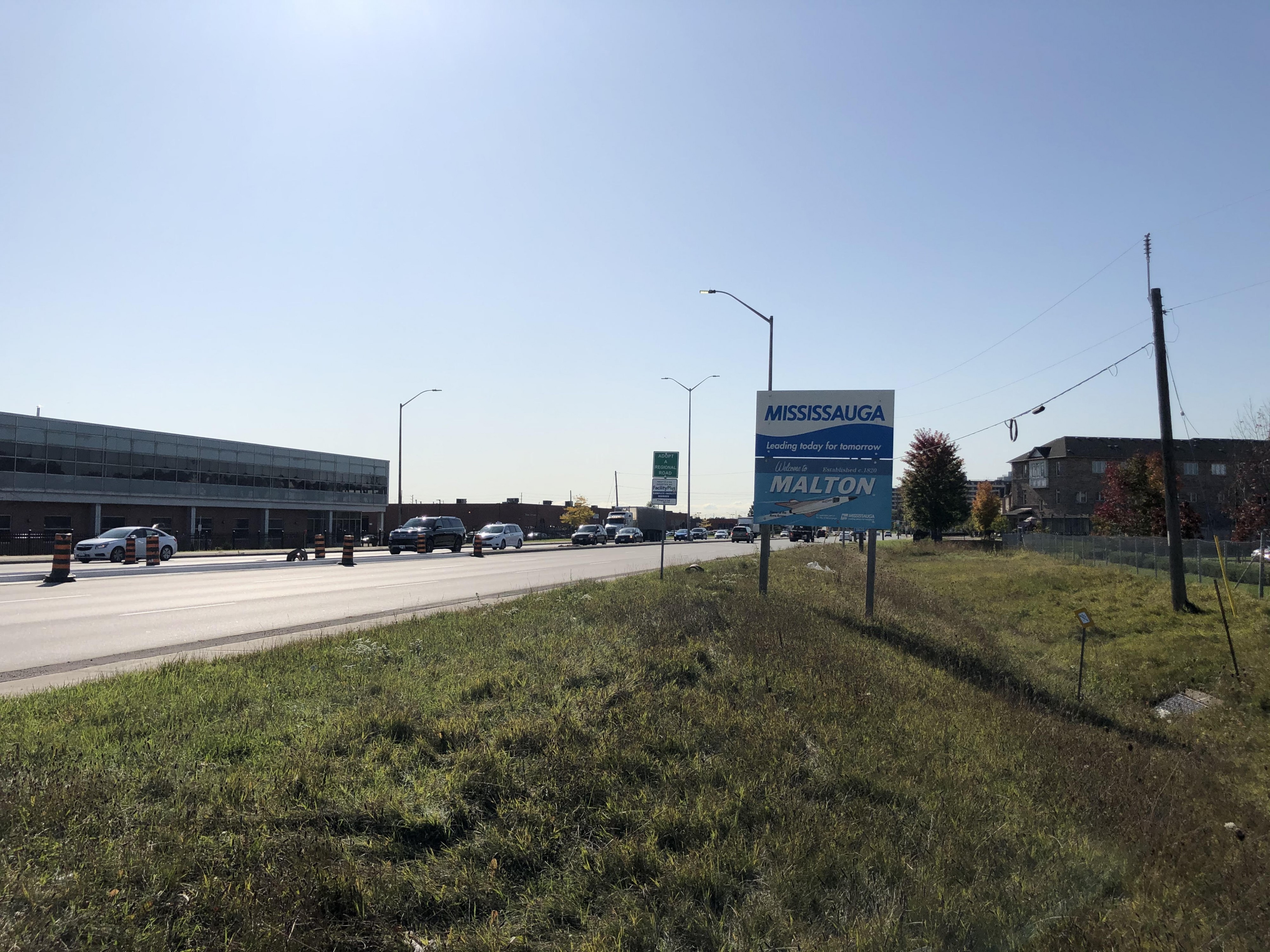 Another improvement plan for the neighbourhood scheduled for 2020 will see the installation of a multi-use trail along the Malton Greenway, building on efforts commenced last year to make the grounds more appealing to local residents, particularly families. With Mississauga Ward 5 Councillor Carolyn Parrish’s prodding, the city recently purchased a 9.5 acre parcel of land off Drew Road to transform into sorely required park space.

The neighbourhood is also planning to re-welcome a Peel Police ‘substation’ formerly located at Westwood Square mall, which had originally closed in 2018 because of budget cuts.

The community station will formally re-open in its original location by the end of March, a police spokesperson told The Pointer last year.

Since the community station was closed, Parrish, citing data provided to her by Peel police, says the local crime rate has increased significantly.

While a well-documented deadly shootout in Malton last September spurred calls for more of a police presence in the community, the overall rise in crime has not been driven by violent crimes, but petty misdemeanours, says Parrish.

“It was mostly property crime, not violent,” said Parrish this week. “Shoplifting, vandalism.”

Part of the reason for the lack of improvements in this part of the city compared to further south, is the “huge monster” Toronto Pearson International Airport, which sprawls for hundreds of hectares in the eastern part of the neighbourhood.

The looming presence of the airport in addition to neighbouring industrial zones and bordering Brampton have historically discouraged any meaningful community development efforts, says Parrish.

Another beautification project for the park will see a full-scale replica of the Avro Arrow, once manufactured in Malton, erected in the park to further highlight the neighbourhood’s ties to Canadian aviation. In the late 1950s, Malton became an internatonal leader in aeronautic design as the home of Canada's first supersonic aircraft, which was years ahead of its time. But, in 1959, former Prime Minister John Diefenbaker terminated the Avro Arrow project, and the five completed Arrows were taken apart.

The project is budgeted at $3.6 million, with the city pledging $2.2 million coming from preexisting grants and funds as well as private sponsorships and donations.

“We’re going to see that investment and awareness that Malton is the gateway to Mississauga,” said Hart.