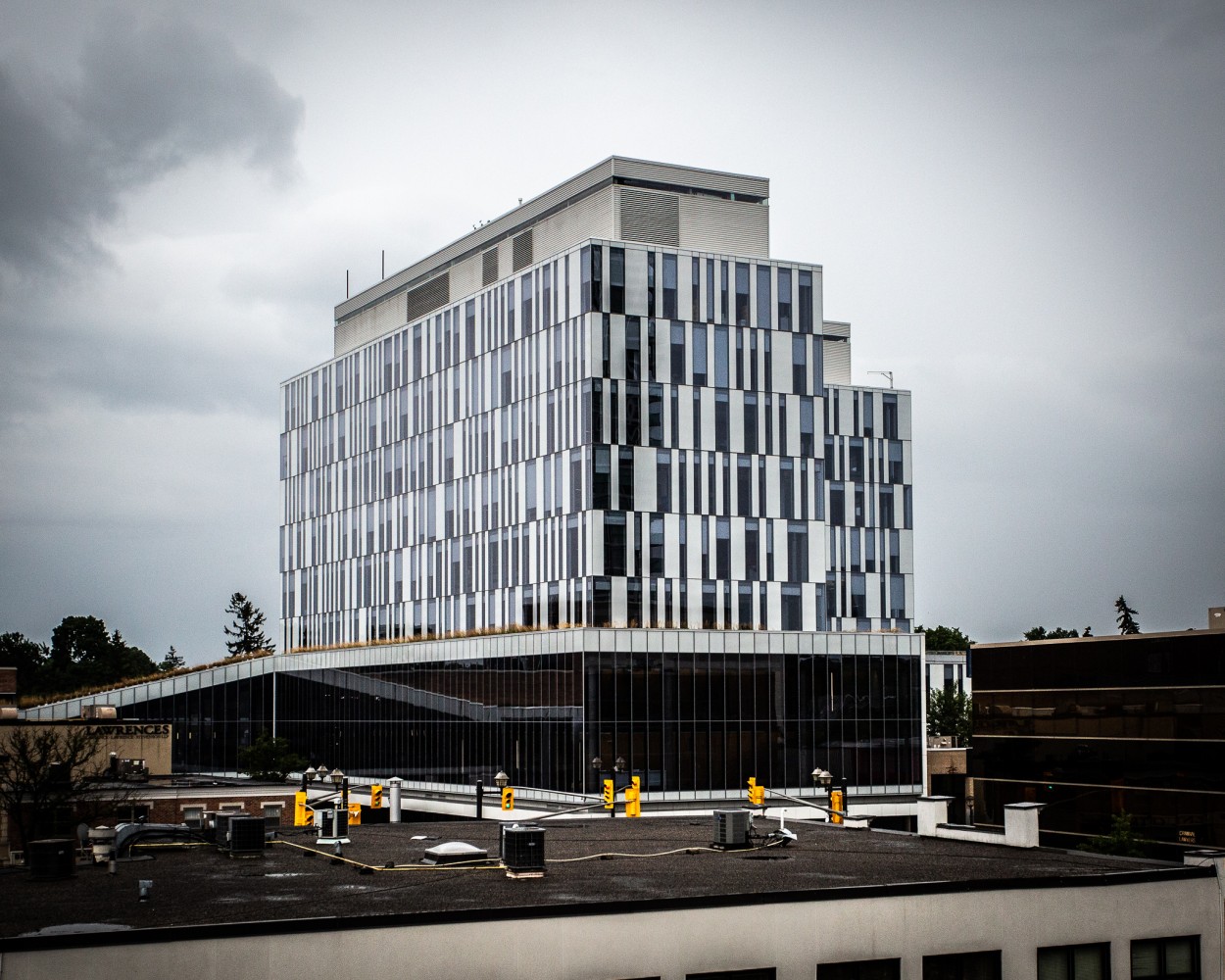 It’s not uncommon for frustrated citizens to remark that their political representatives don’t know what they’re doing. Mistakes, costly blunders and scandals plague all governments in some form and eventually the public grows weary.

However, with busy lives to lead, outcry rarely extends beyond grumbling, with the same few groups of people running for office time and time again.

Brampton residents feel this way. Many are frustrated with their provincial representatives over the cancellation of $90 million in funding for a Ryerson University satellite campus, for example. Meanwhile, local representatives aren't exempt from criticism either, with residents frustrated over policing and the LRT amongst other issues.

All that can change, though, and the people of Brampton can shape the city’s future, urbanist Zahra Ebrahim told residents on Wednesday.

“You need to know that you are all city builders and that your lived experience is all the credential you need to engage with the city,” she told a small group of attendees at the city’s downtown Rose Theatre. “If we want Brampton to be inclusive, it means that we are consistently activating space between institutions and infrastructure and that has to be done by you — the community. You need to feel like you belong here, connected to your neighbors, even when you disagree with them, and be tuned into your sense of agency.”

In a nod to Brampton’s diversity and the role it must play in the city’s redevelopment, Ebrahim added an anecdote from the beginning of her career. She told the assembled audience that, when she graduated, “the average age of a successful architect or city builder was 55,” most of whom were predominantly white and male. As the City of Brampton’s diversity audit recently found, city hall continues to not accurately represent its citizens, meaning increased engagement with people’s different lived experiences is crucial. 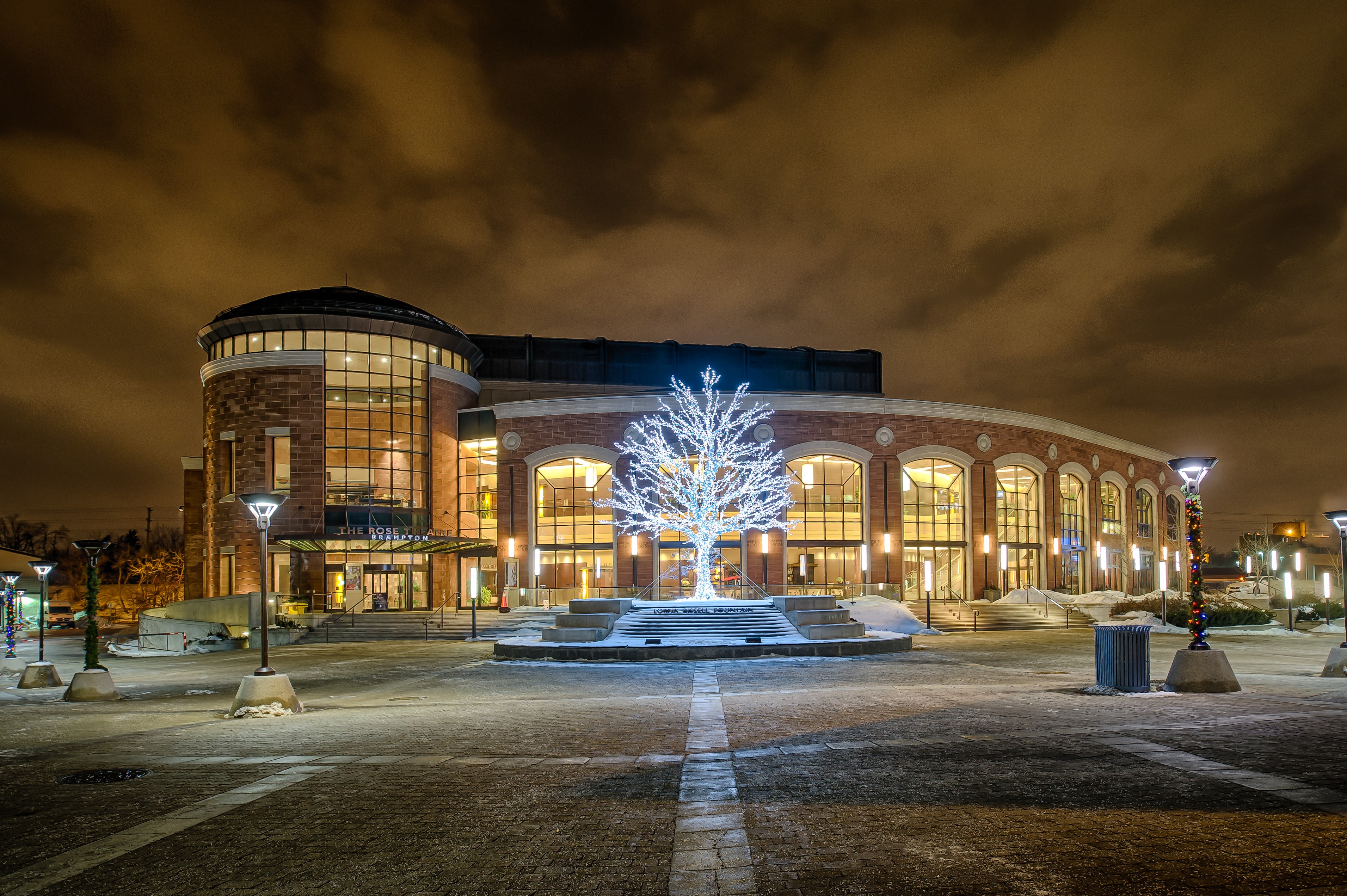 Ebrahim spoke at an event organized to continue engagement with Brampton’s 2040 Vision. The document, also entitled Living the Mosaic, portrays the city’s potential future with complete streets, walkable communities, a series of rapid transit corridors and an end to sprawl.

It’s a Brampton unlike anything seen today.

The document was created by internationally-renowned urban planner Larry Beasley and featured public input from more than 13,000 people. Combining resident feedback with Beasley’s experience, the document’s 97 pages lay out a plan for a future city geared towards the people who live there, not those who profit from them.

The first section of the 2040 Vision focuses on public engagement, telling the city the conversation must continue beyond its publication. It suggests council “institutionalize public engagement,” which can be done by first educating the public on how cities function, in turn inviting residents to provide city hall with input on how its structures should operate.

The speaker series at the Rose Theatre, currently running on Wednesday nights, is an attempt by the city to do just that. Influential speakers such as Ebrahim complete a lineup of thinkers and talking heads in urban development, offering an opportunity for the public and council to learn from their pioneering work. In the background, the City of Brampton is engaging in a review of its Official Plan, attempting to transform the philosophy of the 2040 Vision into planning legislation, zoning and bylaws.

However, something isn’t quite right. On Wednesday, Ebrahim and former provincial NDP leader Stephen Lewis spoke to a couple of hundred residents at most, despite the fact that tickets were free and complimentary local food was provided. Of the city’s elected officials, only Mayor Patrick Brown and councillors Rowena Santos, Jeff Bowman and Martin Meideros showed up, with just Santos staying until the end. 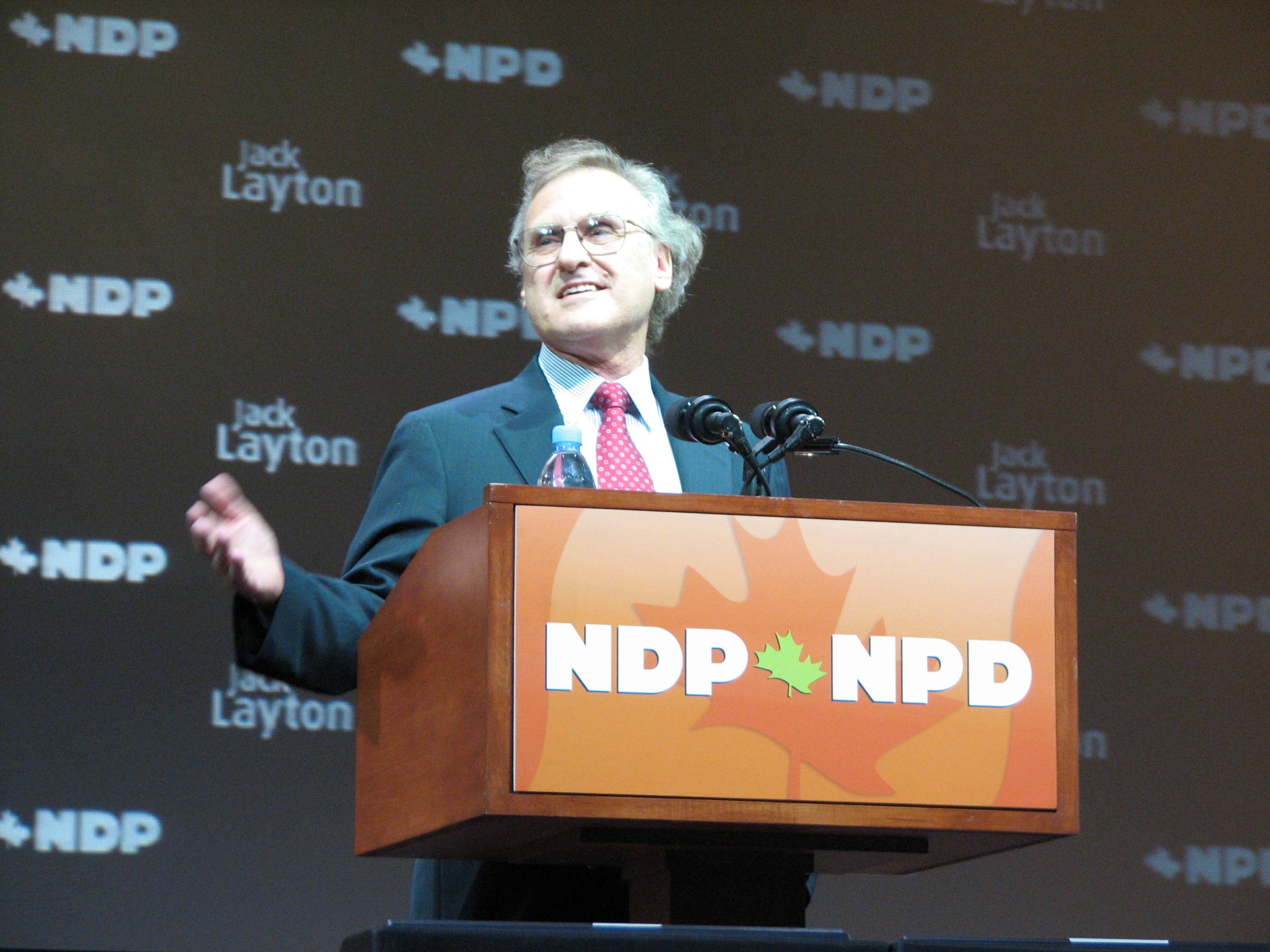 Frustratingly, what Ebrahim had to say was not heard by the entirety of city hall, let alone everyone living in Brampton.

“As you go through the process of Brampton 2040, bringing your vision to life, pay attention to questions that are being asked and ensure that within them there are two things: people and needs,” she said. “And you'll be surprised how many times you'll see problem frames coming out of institutions that don't have people and needs.”

In sprawling Brampton, historical planning has taken neither of these factors into account. The average resident doesn’t crave another drive-thru and few urban planners would recommend the addition of a new strip plaza anchored around a Shoppers Drug Mart. Brampton’s increasingly climate-conscious youth have a need for rapid transit, local sports clubs and walkable streets, not planning decisions that force them into purchasing a car. 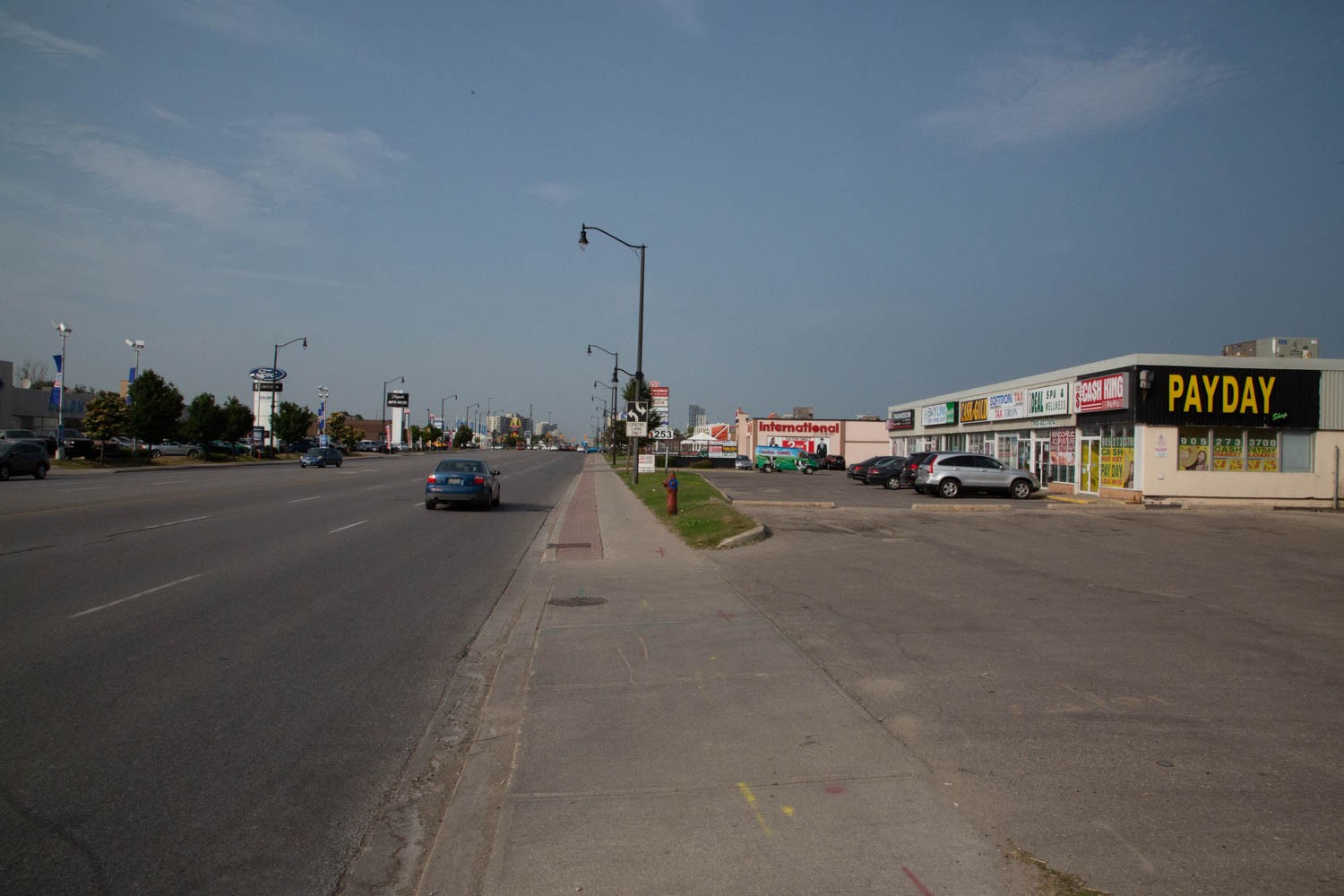 Ebrahim’s central argument revolves around the people who live in a city. She says residents are the ones who truly understand what is needed in their neighbourhoods and why. She spoke dismissively of the public meetings and engagements legislation currently mandates the city to hold, arguing for more open dialogue in their place. Rather than collecting answers to predetermined questions, Ebrahim wants Brampton to meaningfully engage with its residents. This means going beyond the minimum motions of requesting basic public input and creating structures that value resident insights.

“It's going to require fundamentally rethinking what engagement looks like and learning how to prioritize storytelling as a real high quality data. Whether you're working in government or a resident of the city, it's imperative that you collectively advocate for ongoing ways to learn about how people feel and not just what they say. Solving real human problems [is] another simple thing that's incredibly difficult.”

She went on to say institutions should be sure they address the real issues people face, instead of focusing on “efficiency or delivery on outdated assumptions about change.” 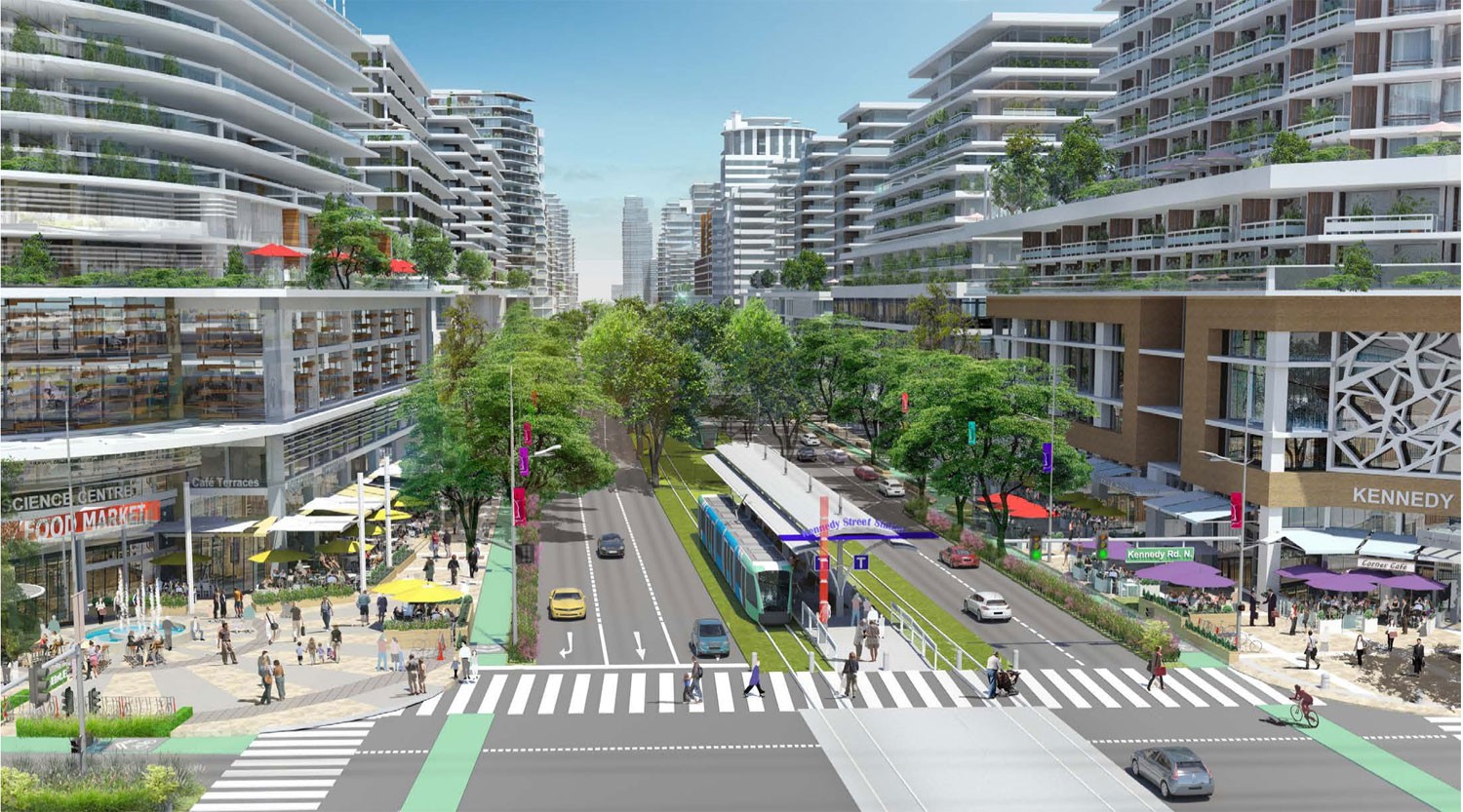 A rendering depicting Queen Street in the future, as proposed in the 2040 Vision

In order for the city to successfully engage with its residents, Ebrahim explained the need to “flip orthodoxies.” Put simply, this means encouraging organizations to reverse existing habits and rules. At city hall, council meetings technically provide an opportunity for dialogue. Residents are welcome to come and present on any topic featured on the agenda to council, after which the issue can be discussed with elected officials and city staff. However, meetings are held at 9:30 a.m. when the majority of the population is at work. To make these meetings more accessible to everyone, they could be held in the evening, with food provided to encourage attendance, engagement and allow democracy to fit into people’s lives.

It’s no secret developers donate money to councillor campaigns and regularly meet with elected officials and city staff. Representatives of development companies are paid to hold meetings — it’s their job, meaning they can do it during the middle of a working day. These companies also have a clear vested interest in seeing their development applications approved.

Residents, on the other hand, hold no such agenda. The majority wish to see a better city and understand the issues affecting them on the local level. But meeting with councillors is harder for residents than developers.  Dialogue has to happen at evening events, during lunch breaks or over the phone. Instead of being paid for their time, residents lose productivity and valuable social time. Where developers have the time and money to take influential people out to lunch or drop by their offices, residents don't have the same privilege.

It is these institutional barriers Ebrahim urged the city to remove, making engagement with government easy, useful and “even fun.”

The fact just four council members and few residents were present to hear Ebrahim and Stephen Lewis speak illustrates the enormous task the city has to undertake. If Brampton can overcome its engagement obstacles and heed the very words of the experts it invites to its speaker series, the 2040 Vision could be a genuine opportunity for change.