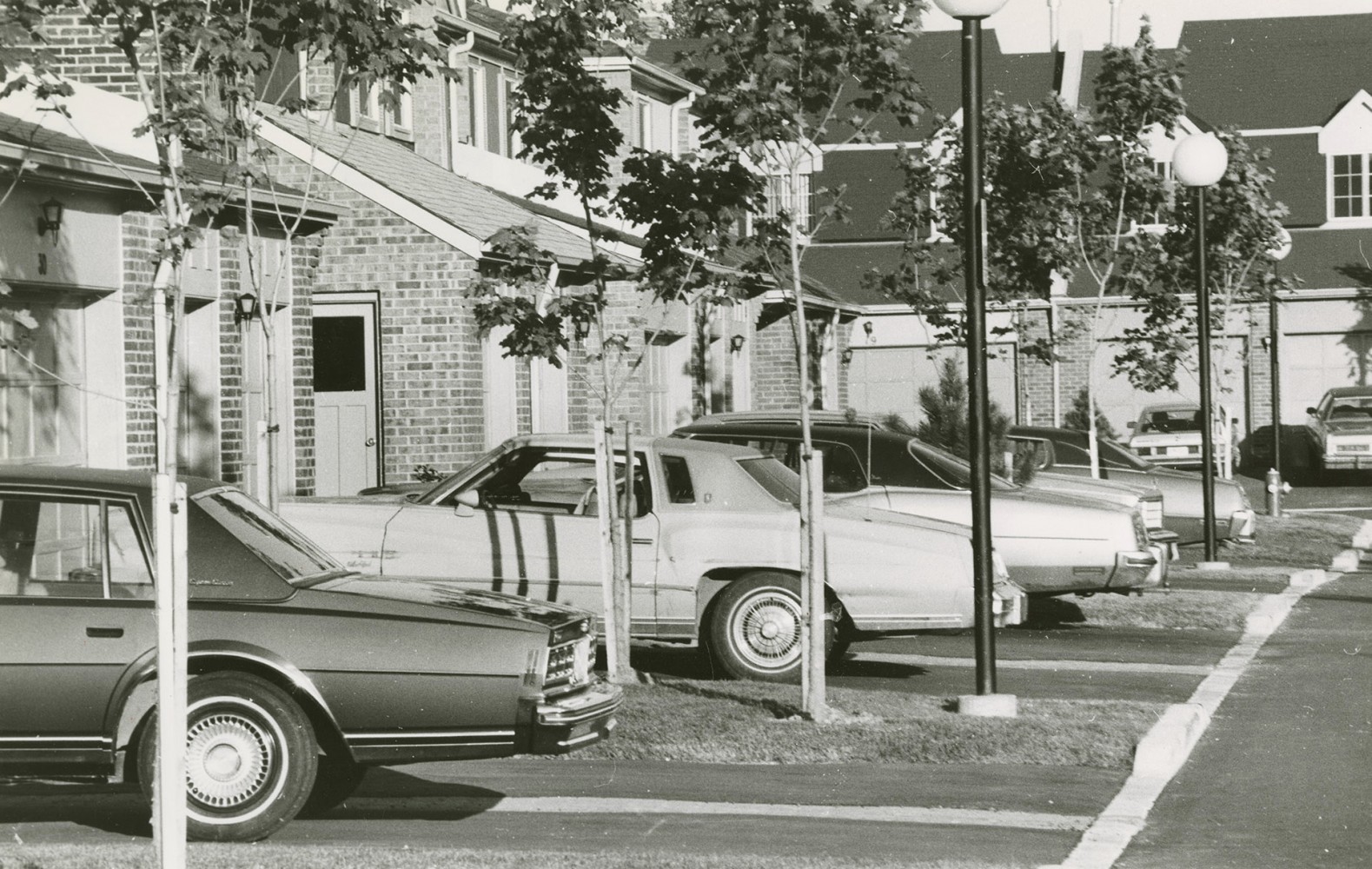 For decades, the car was central to the notion of freedom in North America. Eager teenagers scrambled to get their licenses as soon as they could, in a world where owning a vehicle was the ultimate sign you had come of age.

The automobile was a golden ticket, offering the opportunity to go anywhere at any time, making you the master of your own destiny. 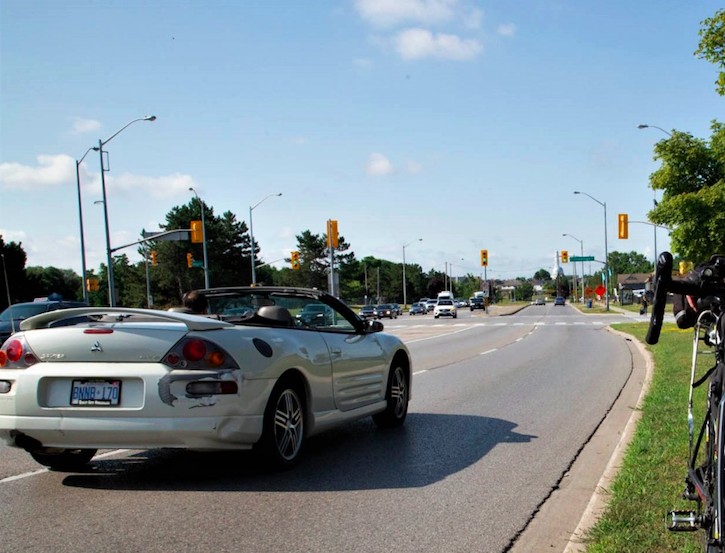 Ironically, as more and more people sought out the car, the vehicle became less and less freeing. The promise of driving wherever, whenever was replaced with traffic and congestion. Short trips became frustrating stakeouts, with drivers circling busy parking lots for empty spaces like vultures.

For city builders and planners, it became complicated too. Originally, the car had allowed developers to build housing almost anywhere and the city could plan just a few years ahead. But, as the Region of Peel repeatedly demonstrates, this haphazard, market-driven planning had consequences. In Mississauga, 15 percent of the city’s land is dedicated exclusively to off-street parking, a number that doesn’t include private driveways.

The vast majority of the city is now built out, meaning land for future development is scarce. The freedom brought by the car thirty years ago has dissipated, with the automobile having transformed into a planning nightmare.

With this in mind, Mississauga councillors endorsed a new parking strategy in June 2019, with Brampton’s council moving to do the same. Mississauga’s plan began with a comprehensive look at its own strategies, in turn refining them towards a transit-oriented future. The city amended its previous policy that mandated large quantities of parking be provided with each new development. 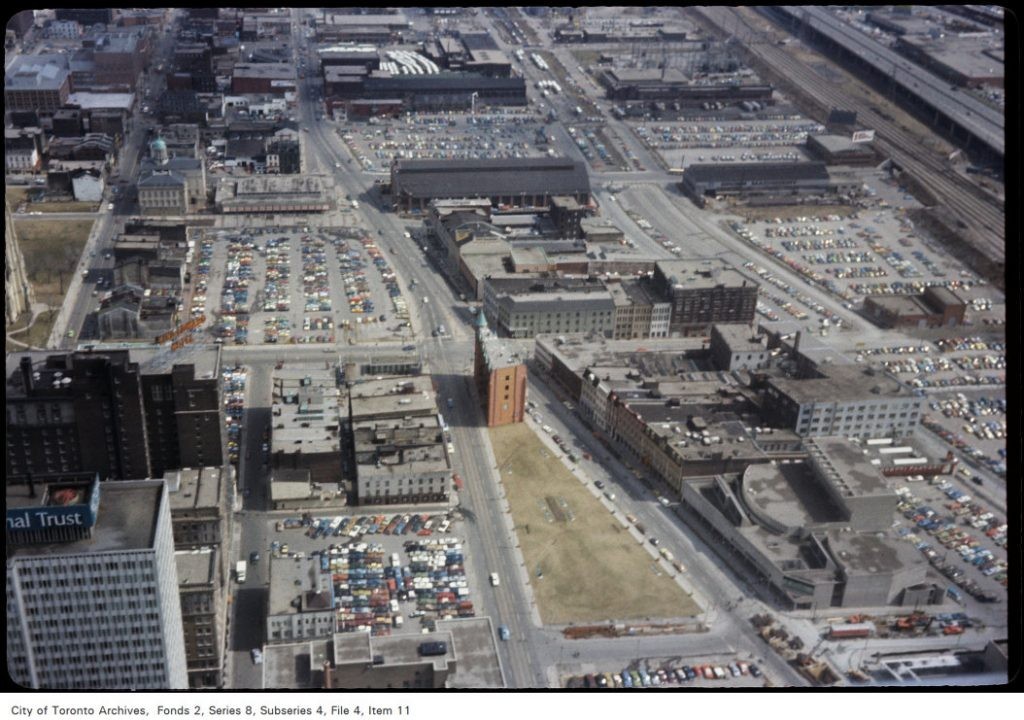 Even downtown Toronto in the '70s was dominated by parking lots

Where some city plans require a minimum number of parking spots to be built alongside new developments, Mississauga has moved in a different direction. The Master Plan suggests “the city should require any development proponent who wishes to exceed the maximum parking requirements to provide a justification report” for the extra car space, instead of requiring reasons to provide less. In the city centre, several developers asked for (and were granted) reduced parking requirements due to the incoming Hurontario LRT.

The issue of parking has long been criticized in academic circles, with city planners appearing to have paid little attention. Donald Shoup, a distinguished professor of urban planning at UCLA, has written at length on parking. He condemns city planning standards and argues there is no rhyme or reason to the parking formulas planners must obey. 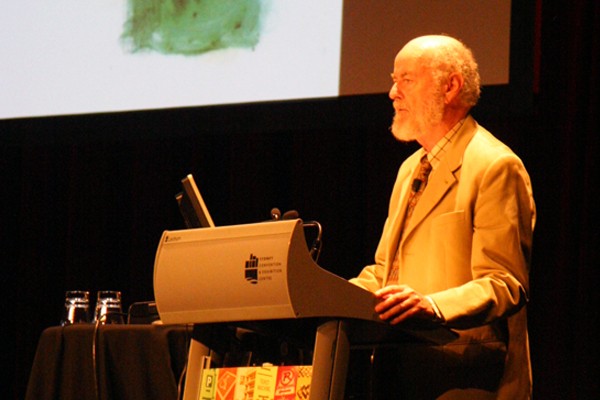 In a Citylab article adapted from his book, Shoup explains the lack of logic at play. “Planners have adopted a veneer of professional language to justify the practice, but planning for parking is learned only on the job and it is more a political activity than a professional skill,” he wrote. “I have never met a city planner who could explain why any parking requirement should not be higher or lower. To set them, planners usually take instructions from elected officials, copy other cities’ parking requirements, or rely on unreliable surveys. Parking requirements are closer to sorcery than to science.”

Brampton has one such parking plan. During a December Planning and Development meeting, city councillors considered an application to build a 9-storey apartment tower on empty land along Kings Cross Road (Ward 7). The plan for this project suggests creating a ground floor dedicated to commercial space and 144 residential units, 64 of which are proposed as one-bedroom units and 80 as two-bedroom units. The application asks for a reduction in the number of required parking spaces from the zoning bylaw requirement of 411 to 334, a significant number of parking spots for 144 new homes.

The costs associated with these kinds of parking requirements are high and varied. On the financial front, research conducted by Shoup across 12 American cities in 2012 found the average cost of an above ground parking space was $24,000 (USD), with the average underground spot coming in at $34,000 (USD). Additionally, the land required for this parking creates an artificial shortage, as habitable space ready for development becomes designated parking spots, required for builders to construct units in accordance with city bylaws. Together, these factors drive up house and rental prices. Regardless of whether or not tenants and residents drive, the cost of parking is absorbed into rental and housing prices. This happens even though parking increases sprawl, reducing the effectiveness of transit.

In December, faced with a climate emergency and a city where 83 percent of the population commutes by car, Brampton councillors took steps towards developing a new parking strategy. In two separate votes, councillors directed staff to consider reducing or eliminating the parking requirements for legal secondary suites. City staff were also instructed to begin a “comprehensive municipal parking strategy” aimed at rewriting the city’s parking policies.

In response to a request for comment from The Pointer, Brampton councillors exhibited varying levels of enthusiasm for radical parking reform, with all of those who responded showing some level of support. Wards 9 and 10 Councillor Harkirat Singh demonstrated interest in the policies, explaining the secondary units parking review came separate from a more general request  to see overall action as soon as possible. Wards 3 and 4 Councillor Jeff Bowman said he was in favour of a parking review “with the intent of reducing parking, as well as reducing the number of spots required by developers in areas close to major transit infrastructure.”

Regional Councillor Michael Palleschi suggested the need for parking balance supply with “encouragement of more sustainable transportation modes [...] always a concern.” He told The Pointer he was supportive of a parking review and would consider next steps upon reading the results.

The city’s remaining seven councillors did not respond to a request for comment, including Rowena Santos, the councillor who put forth Brampton’s June declaration of a climate emergency.

A parking revamp like this was recently suggested in the Region of Peel. In Mississauga, last week’s announcement of Oxford Properties’ Square One District included a suggestion to replace parking surrounding the city’s biggest shopping centre with 37 towers of dense housing and office space. Meanwhile, in Brampton, RioCan is behind a plan to revolutionize the city’s beleaguered Shoppers World on Steeles Avenue, turning parking and retail space into a complete community. Both projects have been proposed in conjunction with the upcoming Hurontario LRT and include existing major bus transit hubs within their plans. 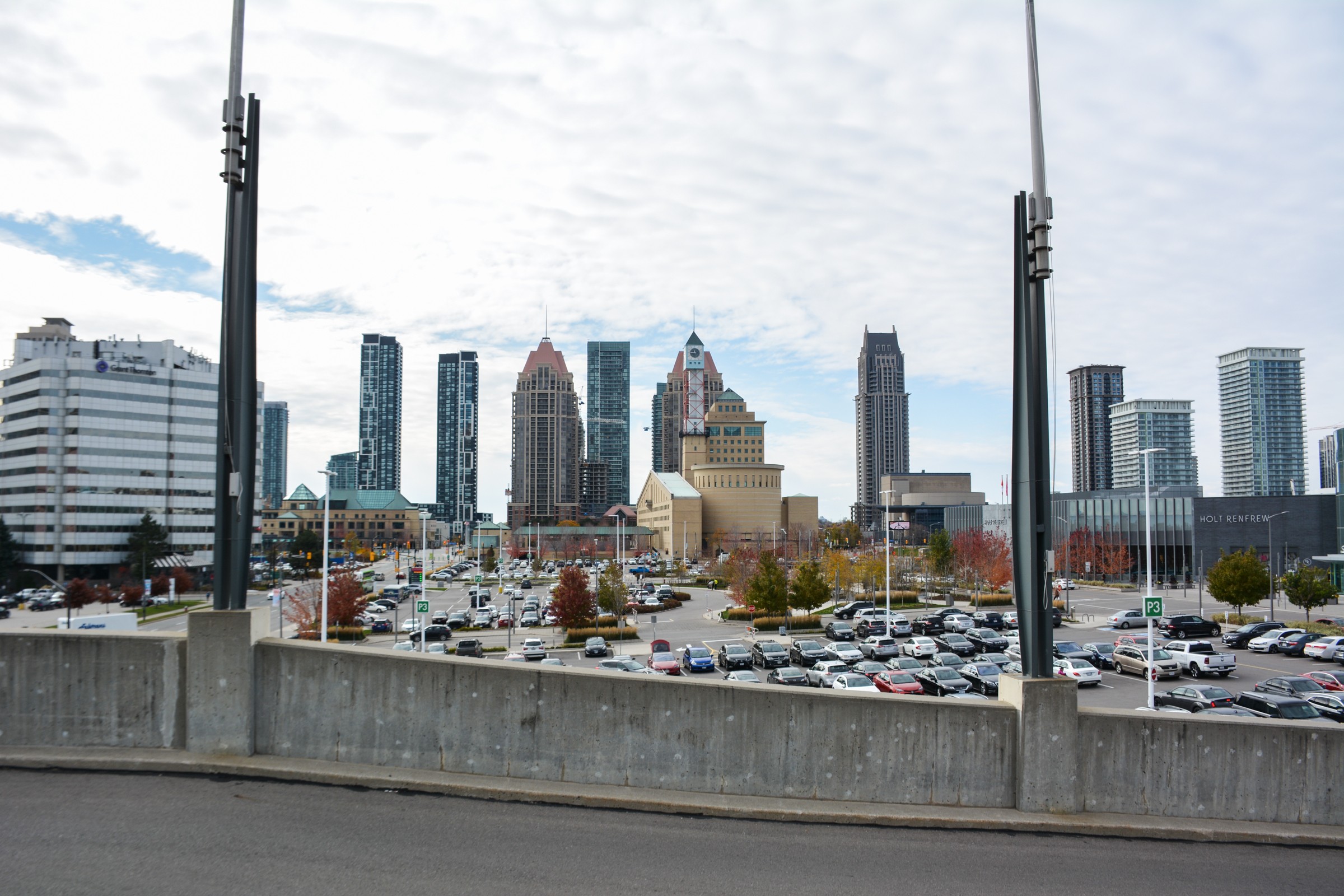 A view of Square One Shopping Centre's sprawling parking lot

There’s a significant upside to embracing these sorts of developments. Similar to finding money under a sofa cushion, both Brampton and Mississauga have accidentally saved precious land by first designating certain spaces as parking lots. If these cities can transform unneeded parking space for other uses, Shoup argues that both should be able to reduce traffic, shorten commutes, clean air and provide more affordable housing.

Within Mississauga’s Parking Master Plan, these potential benefits have been touched upon.

“Affordable housing is also a priority across the city as housing becomes more and more expensive,” the master plan reads. “Parking is a tool that can help shape the City by right-sizing parking requirements or not making parking mandatory for every unit, especially in rental or affordable housing projects. Through unbundling parking from unit sales or rentals, housing can become more affordable for an individual or family that chooses other modes to move around the City and can also significantly reduce the upfront construction costs for a development.”

“Another consideration is that ‘free parking’ is being subsidized by all taxpayers and consumers of goods and services, whether they own a car or not,” the document adds.

Some cities in North America, such as Buffalo and Oakville, have gone as far as to eliminate parking requirements for developers altogether. Mississauga’s strategy does not go quite as far, instead breaking the city into different precincts, with custom parking requirements in each based on factors such as car ownership and availability of transit. The logical strategy works with data to plan for parking, acknowledging one (big) size no longer fits all in a climate and transit-conscious world. 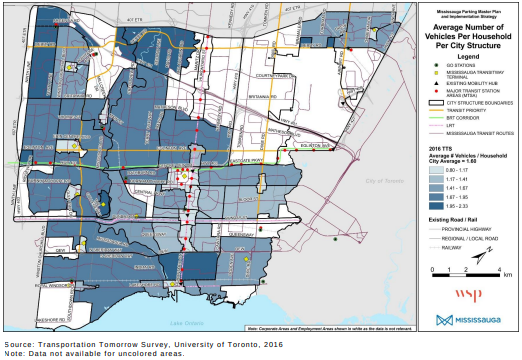 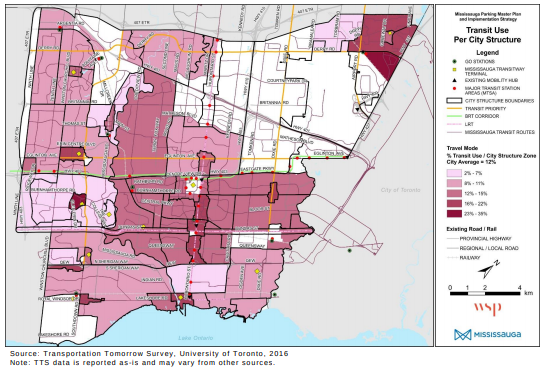 As Brampton embarks on its own journey to reduce structural reliance on the car, Mississauga leads by example, offering the city a path forward. The city’s strategy is not as radical as some options, but offers a careful and logical path to reducing systematic subsidy of the car. Mississauga has blazed a safe trail for Brampton to follow.