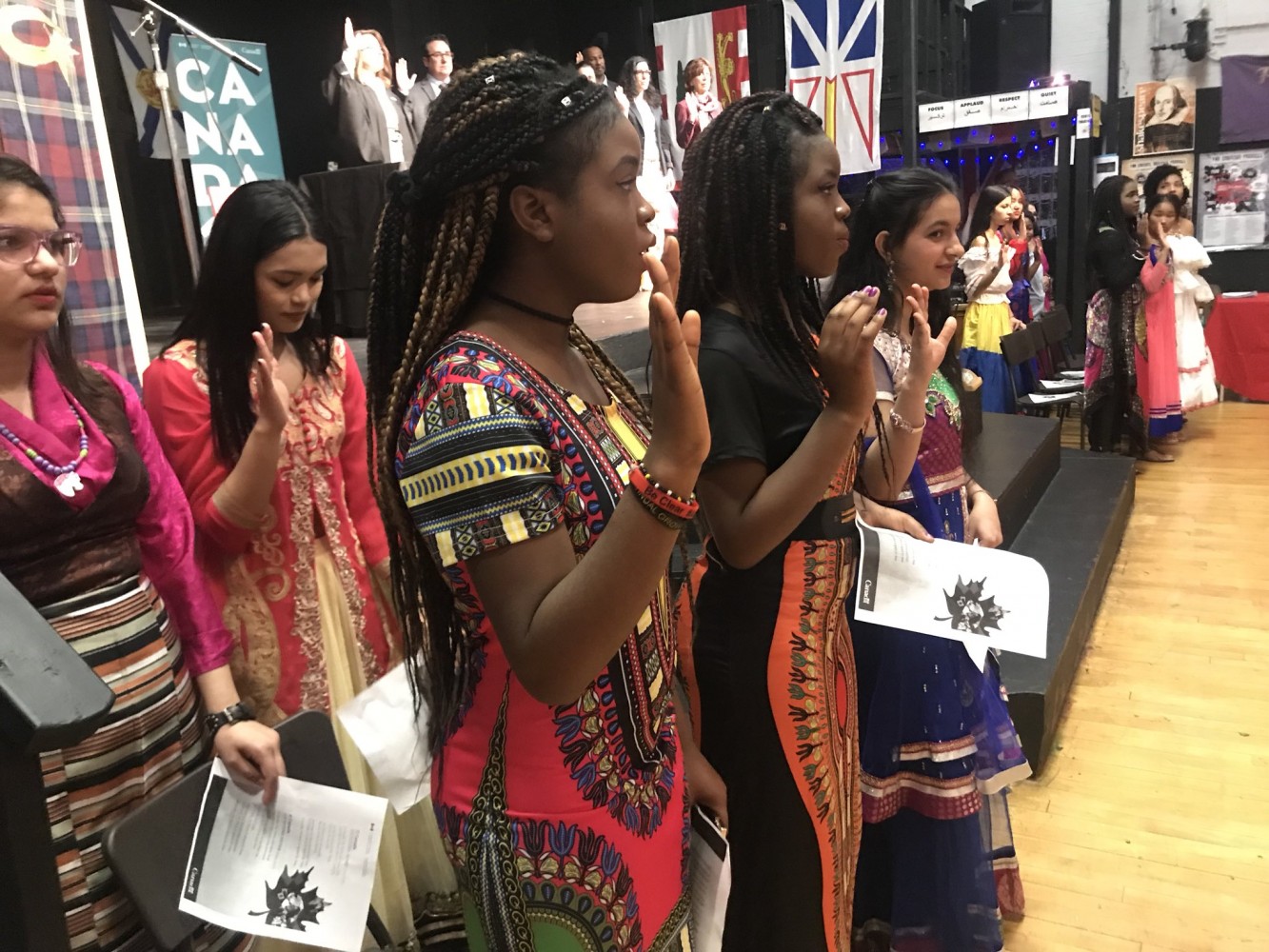 In 2019, the Parent and Grandparents Program (PGP) left many on the journey to bring their loved ones to Canada disheartened, as the application cap was reached within minutes of being open.

Canadian citizens and permanent residents can apply to sponsor their parents or grandparents through the PGP. This popular initiative provides people with permanent means for family reunification instead of temporary arrangements. If all requirements are met, the loved ones of sponsors have the potential to become permanent residents in Canada. On Jan. 28, 2019, the process began with applicants submitting a form expressing their interest in sponsorship. This was followed by an invitation to send in a complete application by April. But the online portal proved problematic as applications were only accepted for a few minutes, after the government’s cap of 27,000 submissions was reached within 10 minutes, shutting the system down while tens of thousands of Canadian families tried desperately to get their online applications filed so they could hopefully reunite with loved ones permanently. 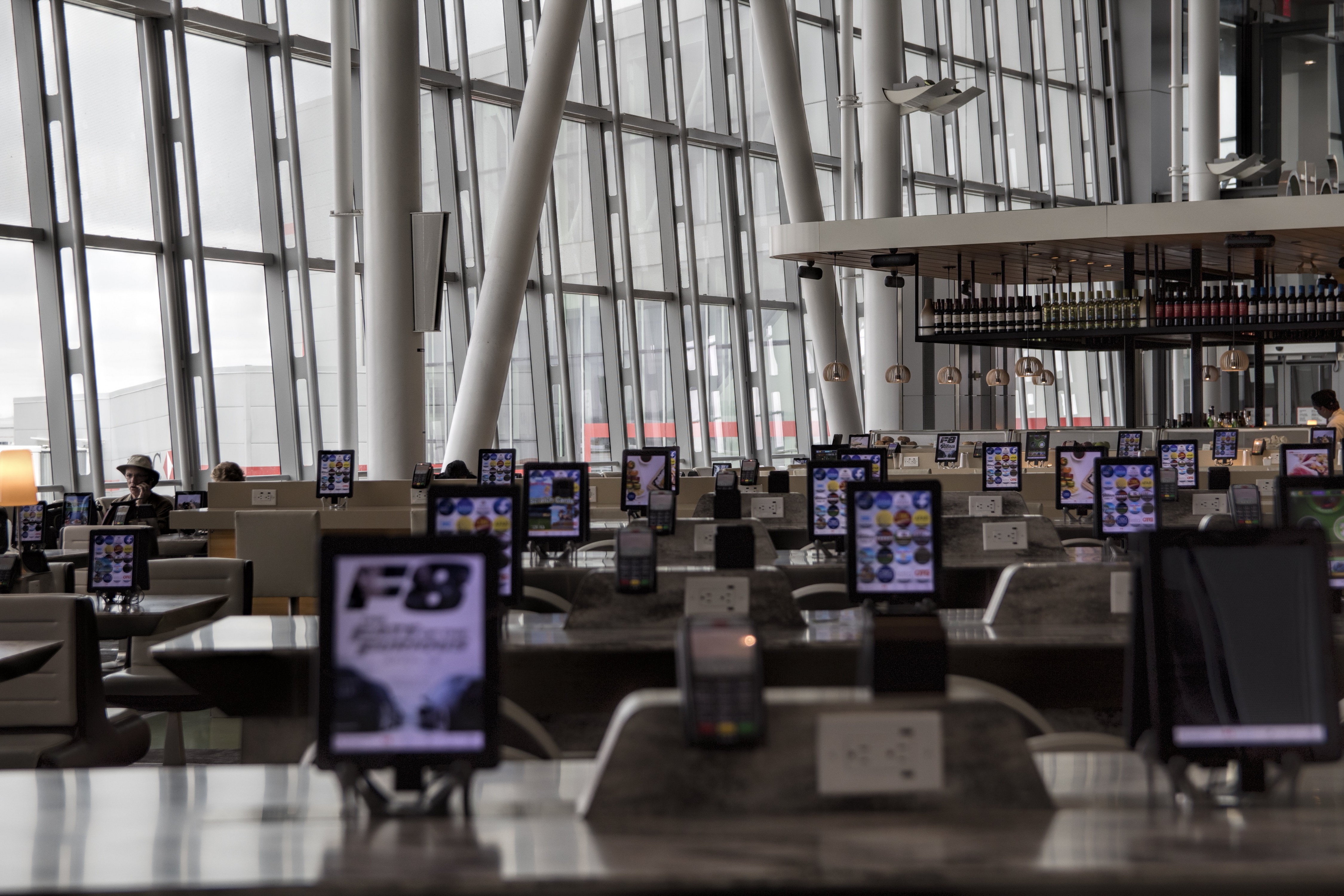 Toronto Pearson Airport, where many newcomers to Canada arrive each year

This year, Canadians hopeful to bring their loved ones to the country through the PGP continue to wait as the date for 2020 applications hasn't been set yet, a process that usually starts in January each year. Notice of the postponement came on Dec. 30, 2019, just two days before the application process was supposed to begin.

As previously reported by The Pointer, the government confirmed that 100,000 people attempted to fill out an application in 2019. Taranveer Singh, an immigration consultant, told The Pointer that one of the families he worked with, that was interested in the PGP, missed the chance to bring an elderly parent to Canada. As the woman’s spouse is deceased, she lives alone in India, far away from her loved ones in Canada. “She’s the only one left. The two kids are here in Canada and married. She’s basically alone in India right now, waiting for this program,” Singh said. “They were really looking forward to it [last year as] it would get the whole family living in Canada.”

While Singh said the woman has a "super visa", it’s not enough to allow her to stay with her family in Canada permanently. A super visa is available to parents and grandparents of Canadian citizens and permanent residents. It allows holders to visit their families two years at a time, for a maximum period of 10 years.

Nimish Gupta, an immigration consultant for E2C Abroad Immigration Services, told The Pointer that another concern for sponsors, who are the single child of a family unit, is reuniting with their elderly parents. Gupta said some of his clients want to take care of their elderly parents, but can’t as they were unable to fill out an application. He said many potential sponsors were surprised by 2019’s application process. “I didn't like that process from the government. People are still waiting for a year now [and] the government has put the system on hold. No one knows what’s to come."

This year, PGP applications haven’t opened yet. The office of the Minister of Immigration, Refugees and Citizenship, told The Pointer there are two reasons for this: 2019 was an election year, so a minister was not always in place to make decisions. Any potential changes to the immigration system would come through an annual report, a process that typically takes place in November. With no minister at the time, the office said decisions could not be made for the usual January date to accept sponsorship applications; last year's unexpected rapid response to  the program's online portal, which caused the system to shutdown in less than ten minutes, has also prompted a rethink about how the program should be accessed this year.

Last year’s overwhelmed application process is the latest challenge in a growing list of difficulties faced by the federal government in executing the family reunification program. The minister’s office told The Pointer that 2019 was the only time so far the first-come, first-served model for applications was used. It was the third year the government accepted applications online, but the first two featured a lottery system. Before that, hopeful sponsors had to fill out applications and mail them or drop them off in person, which yielded a separate set of complaints.

“We inherited a system that was pretty messy and people handed in paper applications…People would often hire couriers to wait in line overnight to put in an application,” a spokesperson for the ministry wrote.

But, Singh says, the paper system was better than the online one. “Yes it was slow, it would take longer but at the same time…applicants had full control [over the process]." 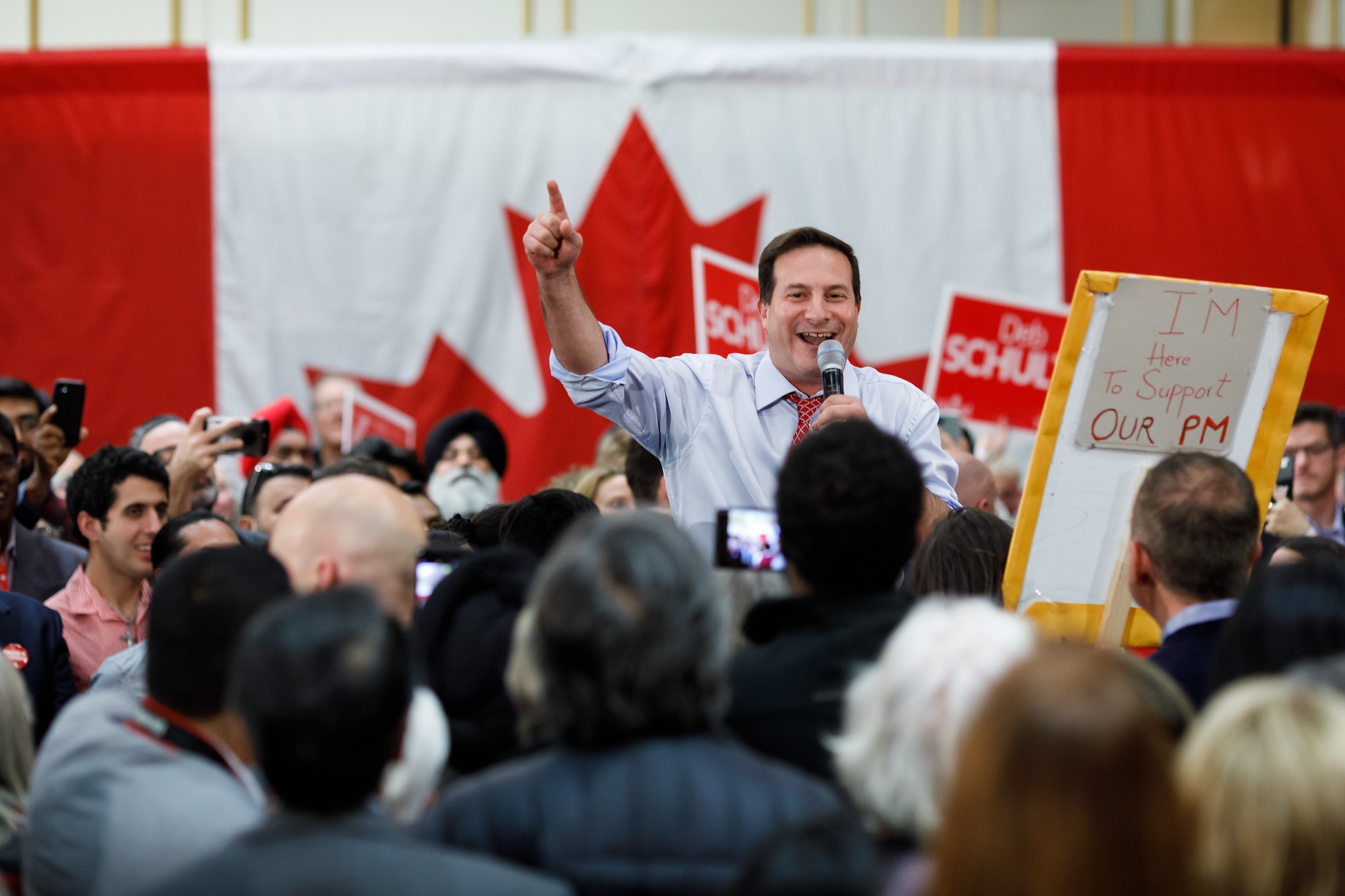 On Jan. 13, Marco Mendicino, Minister of Immigration, Refugees and Citizenship, joined a roundtable discussion in Brampton. The event was not publicized to residents of the city. The ministry said the meeting was meant to be a conversation between the minister, stakeholders and local MPs to talk about immigration in the city. While the PGP wasn’t the main topic of discussion, it did come up. Mendicino’s office told The Pointer it had a roundtable discussion to identify city stakeholders as opposed to a town hall open to the public. “Town halls are a good format but because we’re very early in the Minister’s mandate, he’s still trying to notice some of the issues on the ground to what people are seeing. This is [the] very early days of him getting to know people’s experience with the system.”

The Pointer reached out to Brampton MPs Kamal Khera (Brampton West), Maninder Sidhu (Brampton East), Ramesh Sangha (Brampton Centre), Ruby Sahota (Brampton North), and Sonia Sidhu (Brampton South). Sahota’s office was the only one to get back to The Pointer ahead of publication, and said discussions with the minister “focused [on] how to improve the parent and grandparents program, the international student program, the temporary residence visitor program and increased funding for settlement services.” 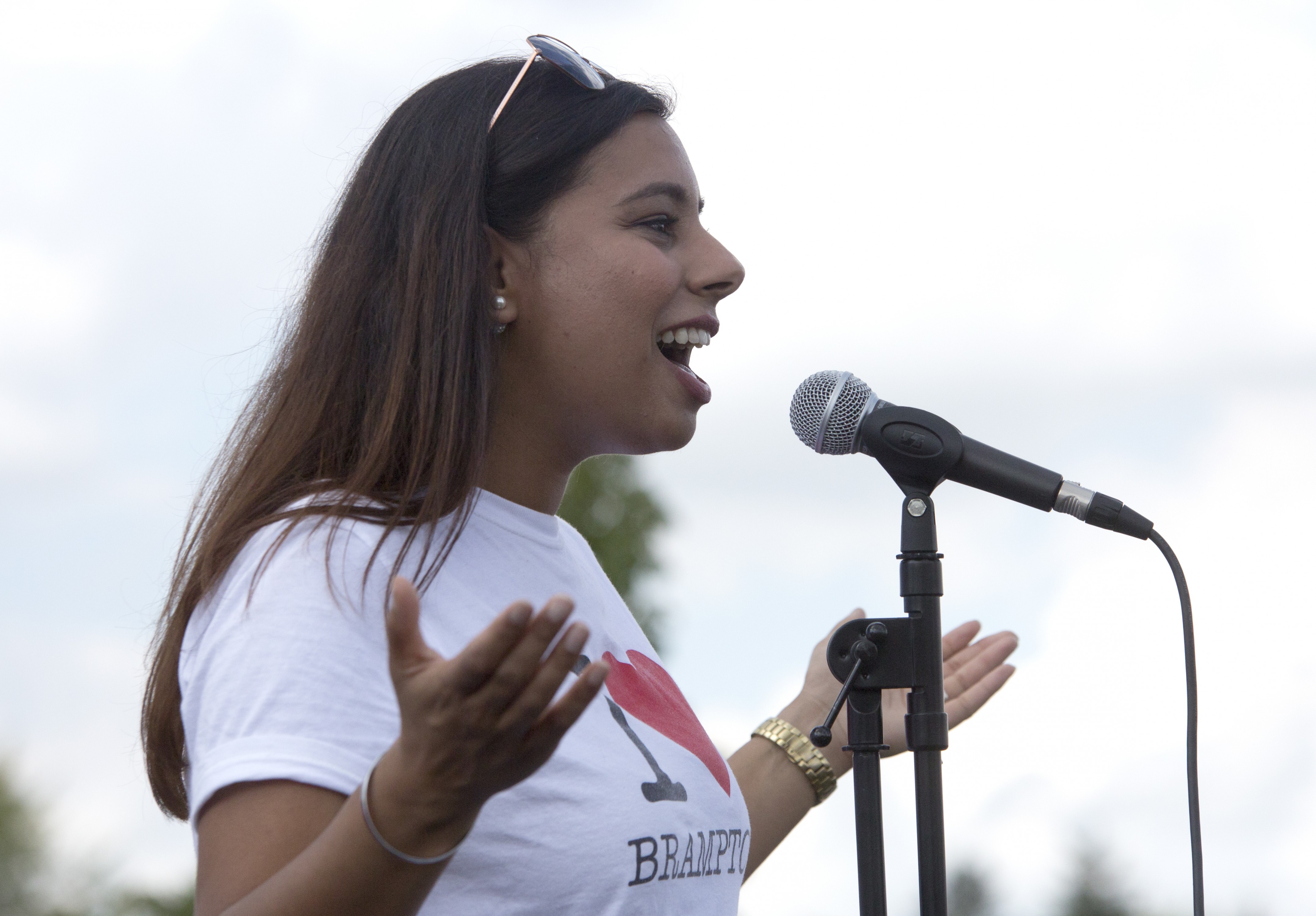 The PGP program was not mentioned in the Minister’s mandate letter from Justin Trudeau, appointing Mendicino to his current portfolio, which was made public in December. This doesn’t mean the issue won’t be addressed, but given challenges faced by the program over the years, its exclusion could mean more uncertainty.

“We understand the importance of the parents and grandparents program for reuniting families in Canada, which is why we are taking the time to make sure we get the application process right for 2020,” Kevin Lemkay, press secretary for the minister of immigration, refugee and citizenship, told The Pointer via email. “Given the interest in the program, we have decided to send a notice out to confirm that application process will proceed later this year and the date of this process has no effect on those who have already submitted an application,” he added. 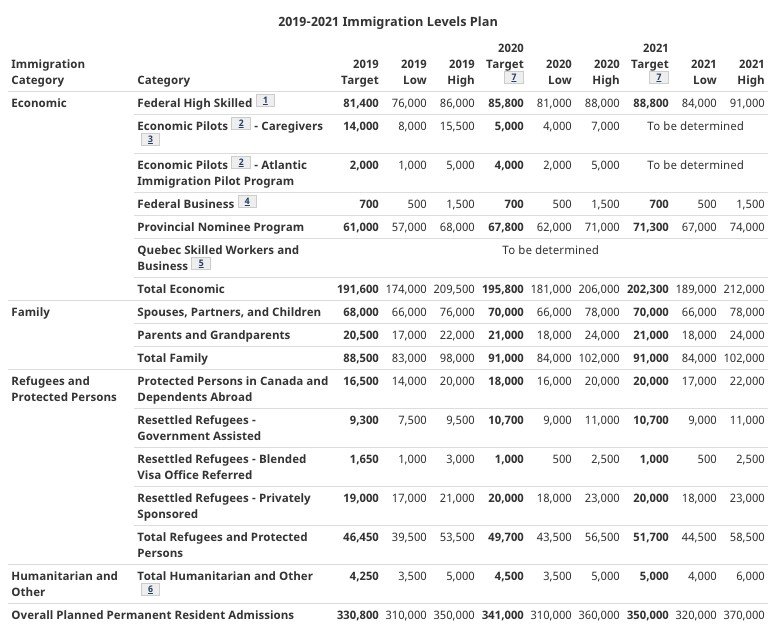 The large number of economic applications is, in part, due to Canada’s aging population. According to a 2018 report, immigration is cited as a partial answer to the country’s declining worker-to-retiree ratio, which sat at 4.21 to 1 in 2012. This ratio is projected to dwindle to a ratio of 2 to 1 by 2036, meaning that economic immigration will have to play a key role in the country's labour market otherwise it will shrink to a point that will render Canada uncompetitive in the global economy.

The minister’s office told The Pointer that work on the annual report is currently underway and the latest publishing date is set for March 12, while an update to the PGP will be made by April 1.