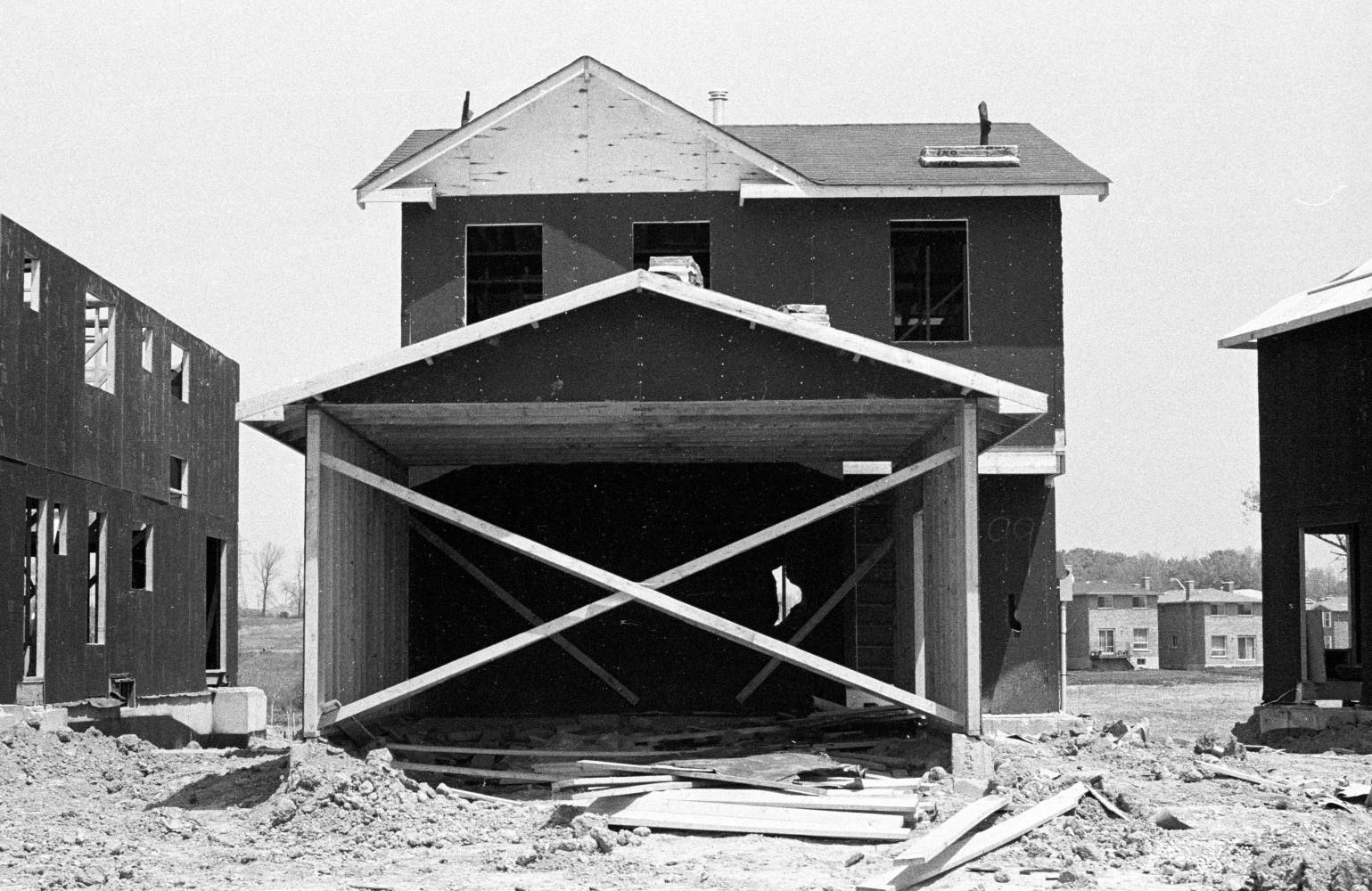 Mississauga taxpayers on the hook for the costs of sprawl

The City of Mississauga’s urban sprawl has grown prolifically since the 1970s. Fueled by developers, it expanded outwards, transforming precious farmland into malls, family housing and parking lots. The city enjoyed an influx of money from development fees, so much that it was able to freeze taxes year after year.

Then, one day, the consequences of this unsustained growth hit.

Sprawl, which had been so appealing when development charges were rolling in, began to cost money. The endless expanse of six lane roads became a major issue for a city keen to promote cycling and walking. Previously desirable family homes are now an impediment to density and Mississauga’s rapidly changing cityscape. 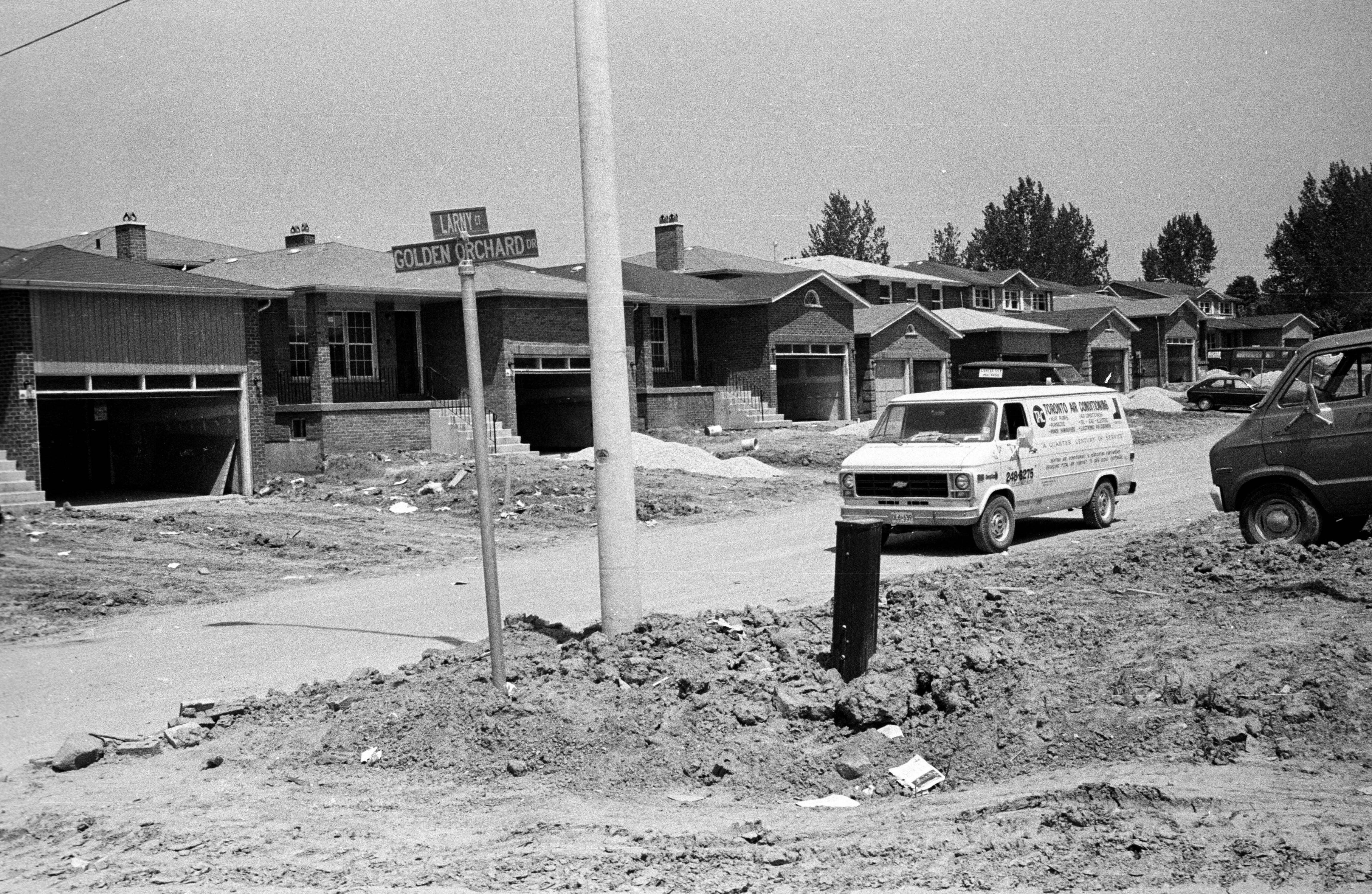 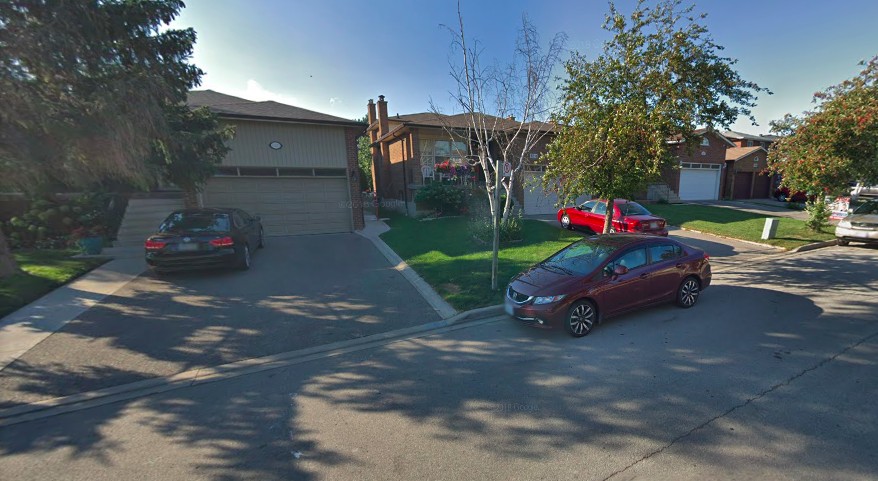 The corner of Larny Court and Golden Orchard Drive in Rathwood, Mississauga (1981, 2018)

According to the 2020 proposed budget document, the city now has an infrastructure gap of $274 million, up from $60 million in 2015. Decisions that were easy years ago now have consequences, as the city faces an ever-growing repair bill it struggles to foot.

“If you have a roof and you know it lasts for 25 years, theoretically, you should be putting x number of dollars every year into a special bank account so that when the roof wears out, you have money [to repair it],” Jeff Jackson, director, finance and treasurer at the City of Mississauga told The Pointer in December. “But I doubt anybody does that, they wait until the time when the roof wears out and they’ve got to scramble to find money. I think the city is generally a little more proactive in that way, [and] do put away money, but as the municipality ages, people understand more and more that you need to pay for that.”

This example is abundantly relevant to Mississauga, where the roof has worn particularly thin and the city is now scrambling to find the money to pay for it. Similar to the example cited by Jackson, the city is now struggling to find the money for repairs as water damage begins to drip through. City hall is increasingly focused on putting money away to help pay for these types of costs in the future, Jackson added.

Over the past two decades, academic research has focused more and more on the hidden costs of urban sprawl, coming to similar conclusions. Aware of the problem, Mississauga has started to move towards solutions. As the city begins to shake off its suburban hangover, it is encouraging density and height, investing in higher order rapid transit on Hurontario Street and increasing frequency of the city’s bus networks.

Academic Mark Swilling pointed to the price of oil as a key driver of sprawl. Swilling says measures like the carbon tax could help reduce sprawl. High oil prices serve as a disincentive, with costs for commuting and construction significant. 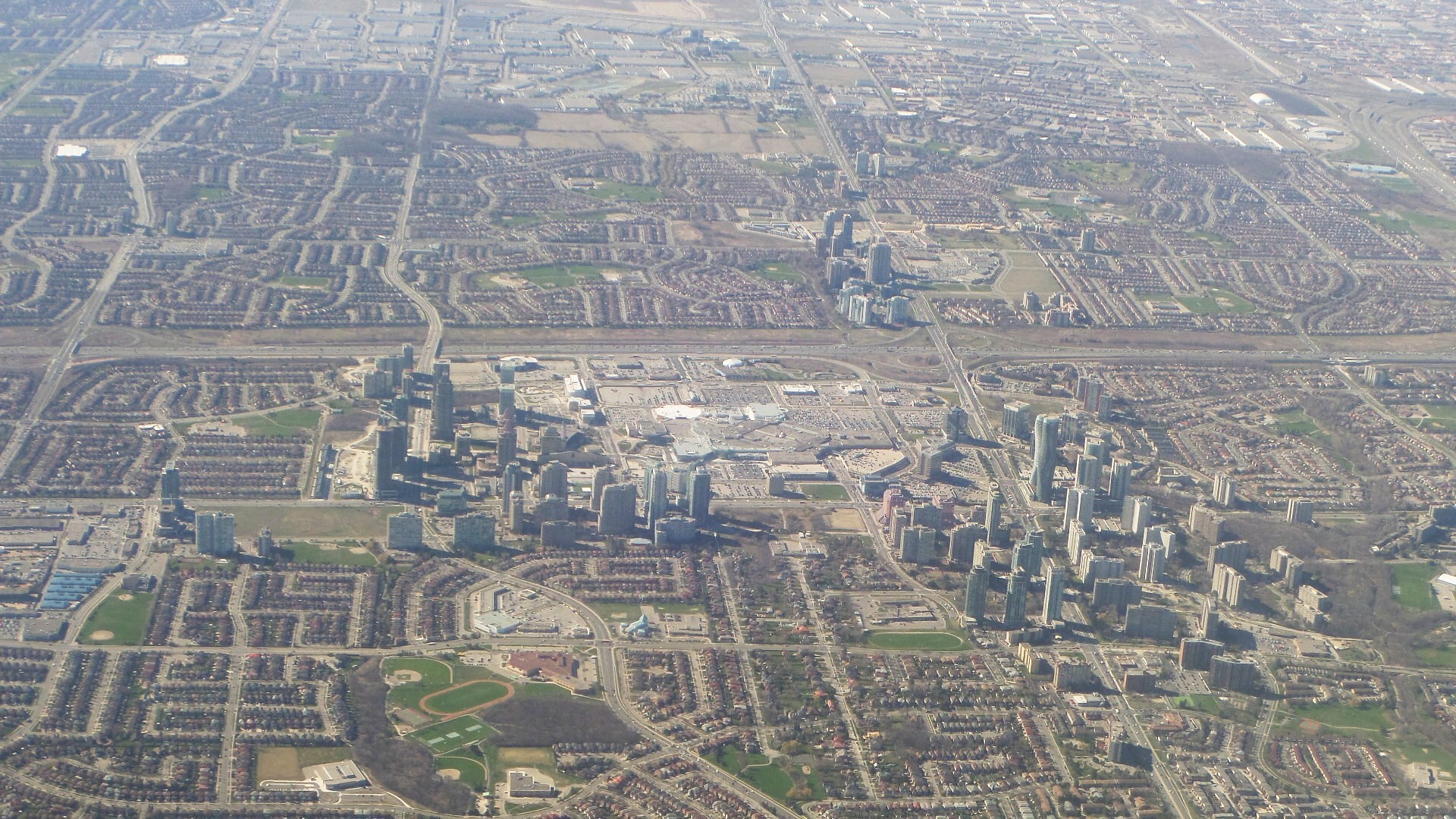 An aerial view of downtown Mississauga and its surrounding sprawl taken on Apr. 20, 2016

A 2013 report by Sustainable Property came to similar conclusions, going further to point out the various ways in which governments subsidize sprawl. The report argued that cities and regions generally “undercharge” developers for the necessary infrastructure, something that “artificially distorts the market in favour of sprawling development.”

“Governments and their taxpayers absorb many of the costs of development directly and in future infrastructure liabilities,” the report reads. “Municipalities can pay a significant financial cost for sprawling development. Sprawling suburban development requires new infrastructure and thus new capital spending. When a new development is approved on the fringes, municipalities get additional property tax revenues, but they also pick up new costs, including liability for future infrastructure maintenance and replacement costs that continue indefinitely, and rise over time. In the initial wave of sprawl, these costs were not understood.”

Even if development charges covered these costs initially for Mississauga, current property taxpayers foot the bill for their long-lasting impact. When it snows, the city must clear its roads. The roads in the city centre’s skyscraper-dense streets provide good value for taxpayer dollars, with city staff clearing the streets for thousands of residents with every kilometre ploughed. However, on the outskirts, value rapidly declines, with city staff paid to clear roads populated by just a few hundred people.

Perhaps the biggest myth of all, when it comes to suburban sprawl, is associated with roads. Every year, Mississauga spends millions redeveloping its roads and widening them, while the provincial government does the same. Last year, Doug Ford’s Progressive Conservatives put shovels in the ground on a $640 million project to widen Highway 401 between Milton and Mississauga, while continuing to ignore the Milton GO line which is yet to be offered two-way, all-day service.

Where transit users pay a fare every time they board a bus or train, road users receive the benefits of highways for free. Aside from the cost of gas, there is no fee for the hundreds of kilometres of highway that many residents travel every day.

In 2018, the UN’s Intergovernmental Panel on Climate Change criticized sprawl. In an unprecedented move, the report outlined how municipal planning and decisions were directly contributing to Earth’s increasing temperatures. The report showed the impacts of climate change, such as rising water levels, were significantly closer than previously thought, with changes to how cities build and develop identified as a key to turning a corner. 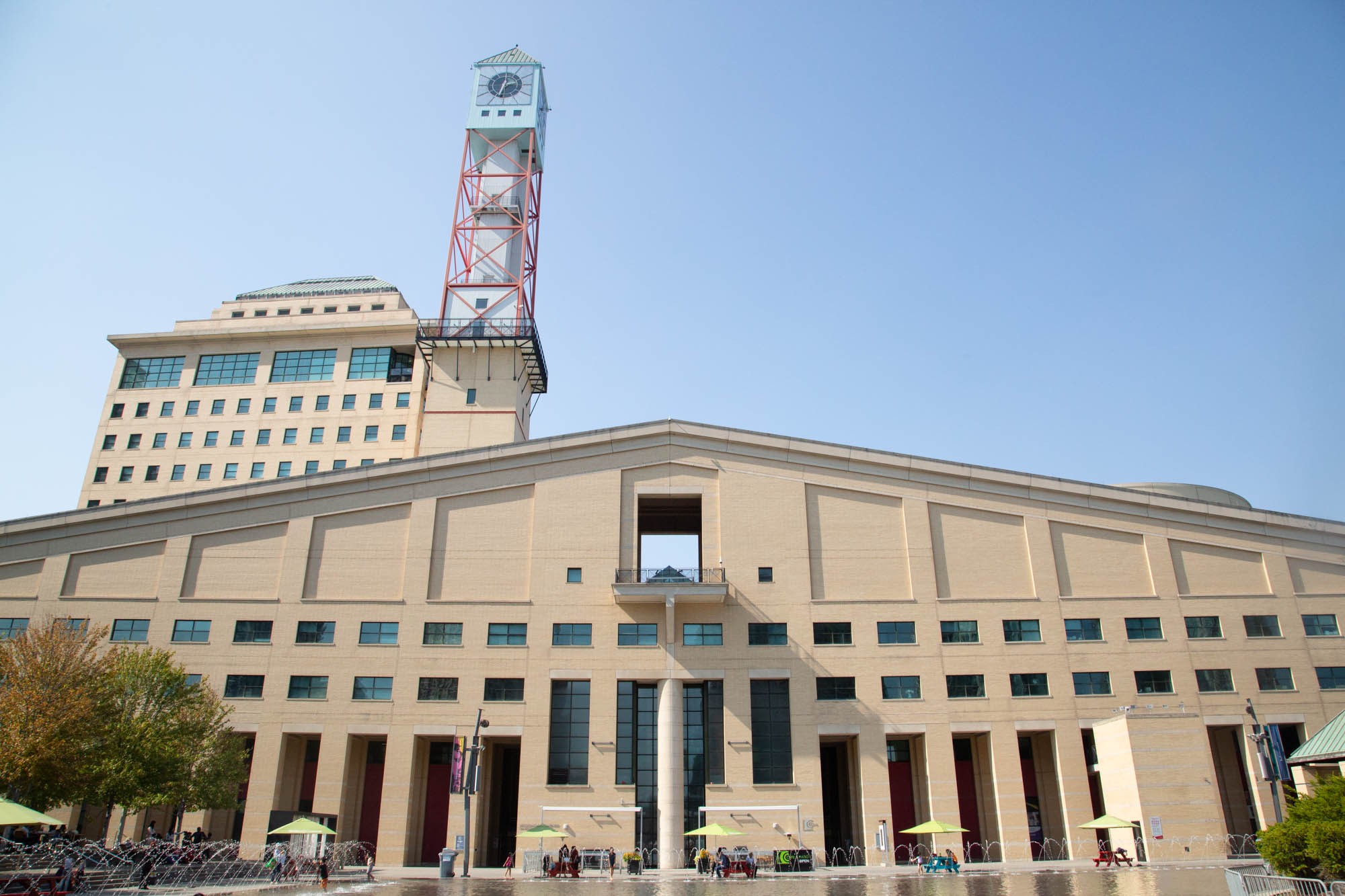 Back in Mississauga, there appears to be consensus at city hall that things need to change and the only way forward is up. Examples such as M City, Lakeview Village and the various towers planned for Hurontario Street show the city’s development trend. This type of planning, on paper, should be more sustainable, efficient and lighter on the taxpayer in the long-run.

However, in the short-term, taxpayers in the city may have to buckle up. As the city’s infrastructure continues to age and roads decay, costs increase. Taxpayers who enjoyed years of low to non-existent tax increases now look set for years of the opposite, as the city gets its ship in order.

After the city’s transition to density is complete, the sunny days of nominal tax increases could return. Until then, residents are left regretting past urban planning decisions.