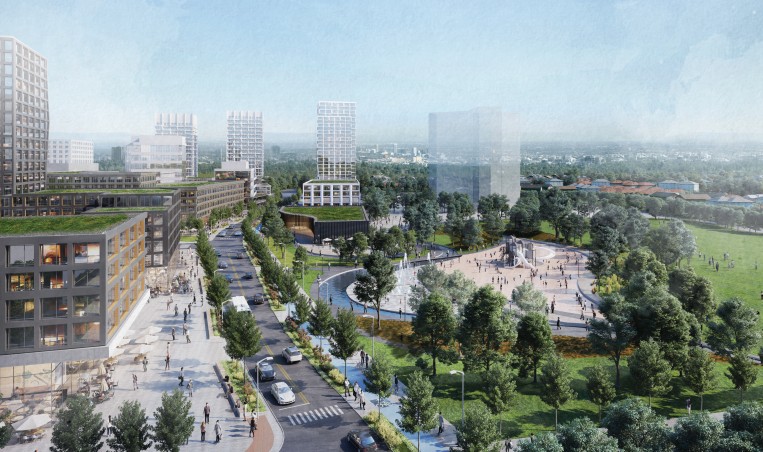 Renderings from the City of Brampton

For Brampton city hall, the 2040 Vision is meant to guide every decision, both big and small. This vision is meant to be at the heart of everything that happens, a blueprint for a city of the future.

Across its 97 pages, Brampton 2040: Living the Mosaic lays out aspirational ideals for city planning in Brampton. It maps out better density, faster public transit and a more sustainable future.

Yet, since it was published in 2018, there hasn’t been too much to show for it.

Master plans, including the Active Transportation Master Plan, have been approved with the 2040 ideology at their core and statements have been made in support of the vision. Yet, tangible actions taken toward the realization of this dream are scarce. At times, council’s actions have taken the city further away from the goals set out in the vision. In June, for example, council gave its approval to the creation of Highway 413, or the GTA West Highway, a new sprawl-inducing motorway, the very opposite of the complete neighbourhoods outlined in the 2040 Vision.

Early in 2020, though, as the new decade gears up, Brampton city council will have an opportunity to put their money where their mouth is. On January 13, the Planning and Development Committee will receive a rezoning application for Shoppers World Brampton (Steeles and Main Street) to turn the mid-sized mall into an ambitious, complete community. 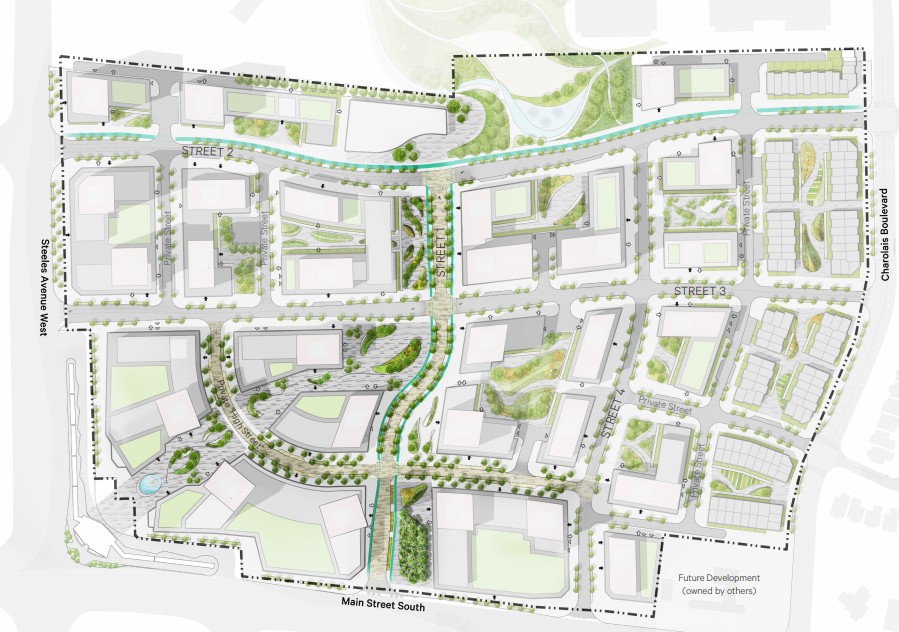 An overview of the plan for the Shoppers World redevelopment.

This is the first chance for councillors and residents to drill into the specifics of plans for Shoppers World that have been around for some time.

Since the initial release of the Shoppers World vision, the developer has held various open house sessions and received feedback. According to their own report, the creation of a new hub and destination is one of the most important features for residents. Those polled were also apparently supportive of plans to create a community space, which could be either a community centre or a library.

The developer also shared that some resident concerns had been expressed, though the report did not elaborate. The issues raised came under five broad umbrellas: traffic, parking, height/density, safety and construction.

The Pointer has made reference to the Shoppers World plans in several previous features on the issue of density and suburban redevelopment. In many ways, this is Brampton’s answer to Lakeview Village in Mississauga, a plan to raise urban density from the site of a relic. It is the phoenix of urban planning. In Mississauga, density will replace an old power station and in Brampton it will replace an outdated mall. 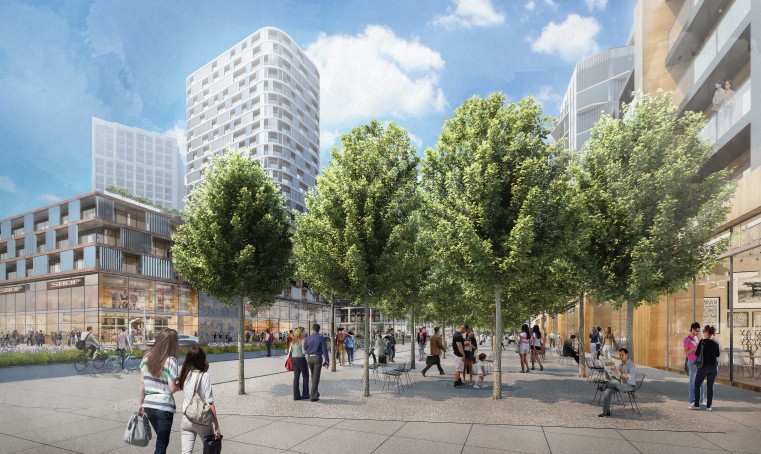 Renderings paint a bright picture of the redevelopment.

The site, developed in the late 1960s, currently hosts large parking lots and major retail units, something developers plan to demolish, allowing them to start again. Major towers will be erected, parkland, office space and retail areas created, all connected by streets which favour pedestrians and cyclists over drivers.

The plan appears to match every ambition articulated in the city’s official 2040 vision. Comparing the documents, it would seem that one inspired the other.

The current owner, RioCan REIT, acquired Shoppers World in 2000, meaning they will have owned the site for a full 20 years when the plan comes in front of councillors for consideration. The rezoning application details the shortest buildings standing at three storeys, with the tallest extending to 28 storeys along the southern side of the development. The design of the community will mean that its height descends from 28 storeys in the south to rows of townhouses in the north. These new structures will target 4,880 residential units, the vast majority of which (4,725) will be apartments alongside 155 townhouses. 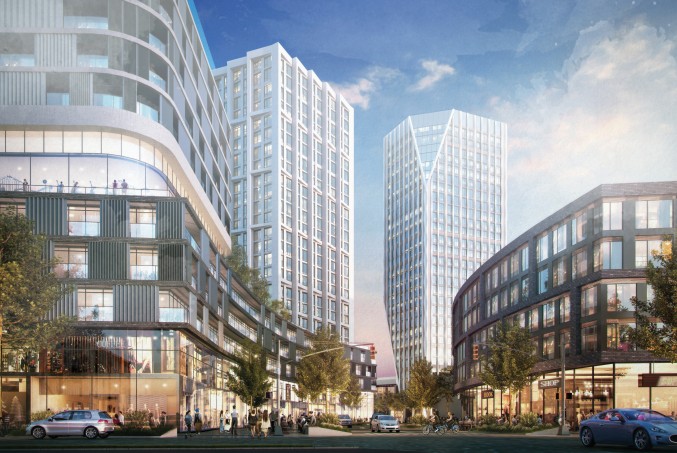 To tie the community together, 1.2 hectares will be devoted to extending Kaneff Park, while just over 80,000 square metres will also be used for commercial operations, attracting cafes, bars and shops. To house these new retail outlets, the developers are proposing the creation of four new roads, which their master plan and projected mockups suggest will be pedestrian centred with features such as patios and walkways.

The Pointer reached out to Ward 3 Councillors Jeff Bowman and Martin Medeiros, in which the development will be located, and Mayor Patrick Brown, for comment on the proposed plans. However, no response was received in time for publication.

“The requested amendment will facilitate the intensification of an existing underutilized site, in a form and orientation that supports the use of public transit,” one line from the submitted application reads.

It is orientation around public transit which may be one of the biggest selling points for this new development. With Brampton Gateway Terminal, the city’s biggest transit hub, situated on the corner of Steeles and Main Street, thousands already pass through the area transferring between different bus services. The addition of the Hurontario LRT, which is currently set to terminate at Shoppers World, adds another option, with high-speed, high-capacity connections to Port Credit GO, Cooksville GO and the Square One shopping and transit centres.

Traditional bus connections also link directly to Bramalea GO station and Brampton Downtown GO, both of which are on the Kitchener Line.

In order to capitalize on the connected nature of the site, developers are planning to create areas to draw transit passengers in to spend money in the retail space or relax in its parklands. To do that, they have planned a so-called Transit Plaza with space to sit, a water feature and the capacity to host events. 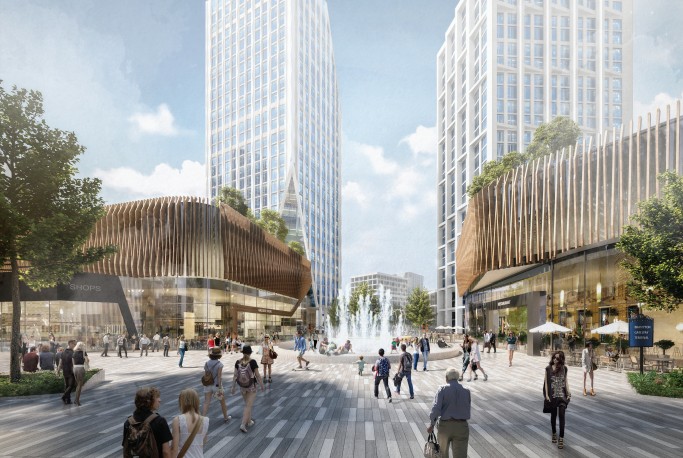 “The transit plaza will be designed to reflect a pond setting, using water elements to activate the space,” the master plan reads. “The pond will provide areas of respite and interaction in a dynamic environment that is situated at a key transit hub.”

While the Transit Plaza is one of the more eye catching options, the entire development is laced with such plans. A Central Square is also planned to host events and pop-ups, similar to Mississauga’s Celebration Square, while something called “The Bosque” will be planted with trees in order to “reflect the cultural heritage value of the Etobicoke Creek and to provide a stark contrast to the surrounding urban environment.”

Though the 5,000 or so residential units will be crucial for Brampton and its ever-growing population, the Shoppers World transformation implies that the complete neighbourhood will be an attraction for people from around the city, not just those who live there. It hopes to become a centre for leisure, retail and community, not simply a place to sleep.

Despite the fact Brampton is generally a suburban city with many owning large homes, the area around the Shoppers World site is something of an anomaly. According to research submitted alongside the planning application, 42 percent of properties in Ward 3 are five or more storeys tall, compared to just 10 percent for the city as a whole. Equally, 47 percent of those living in Ward 3 are renters instead of property owners, significantly more than the city-average of 20 percent.

According to rentals.ca’s annual 2019 Rent Report, Brampton is the eighth most expensive place to rent in the country. At an average of $1,783 per month for a one bedroom (compared to $2,314 in Toronto and $1,950 in Mississauga), high prices are compounding an affordability and homelessness crisis in the city. Brampton’s average rental rates sit above cities such as Ottawa, Montreal, Hamilton and oil-rich Calgary, showing just how much it costs to rent. These high rental rates demand more density and apartments to help solve the crisis, something which the Shoppers World development could help to address.

Rental and height numbers for Ward 3 would also suggest that, where some plans for height and density meet stiff opposition at council from some resident groups and ratepayers associations, the Shoppers World plans could already be in line with the characteristics of the area and the hopes of local residents.

With much made of Brampton’s 2040 Vision, residents will be eager to see council turn talk into action. When Brampton’s planning and development committee meets on January 13 to receive the rezoning request, something of a test will be laid for councillors.

Residents will wait to see if they approve, at the very least, the principle of transformation. Will council rubber stamp the symbolic transition toward 2040 or will there be push back?