When talk turns to the future of transit in Mississauga, the Hurontario LRT has been stealing headlines for a number of years. It’s the flagship project for a modern Mississauga, and helping the city to ditch the automobile in favour of a dense, sustainable urban design.

When current Mayor Bonnie Crombie ran for office in 2014, it was front and centre of an ambitious plan she laid out. Known at the time as Mississauga Moves, the project mapped out the transit aspirations Crombie had for Mississauga as it continued its journey from bedroom community to pedestrian-friendly metropolis.

The public in the GTA have long been skeptical of politicians' transit offerings. Regularly regarded with derision and referred to as ‘maps on the back of a napkin’, they’re often all politics and no planning. Examples such as Doug Ford’s transit dream for the GTA and John Tory’s Smart Track are regularly tossed around.

More than a half a decade after Crombie took office as mayor, winning re-election in 2018, her transit plans for Mississauga don’t look as haphazard as those coming from Queen’s Park. Crombie’s Mississauga Moves map laid out a web of transit plans, most of which are coming along in some form. The Hurontario LRT, though delayed by two years, is finally set to break ground. The city has applied for significant federal funding to build its Dundas Bus Rapid Transitway and the 403 Transitway is operational, though debate remains around the benefits it brings. 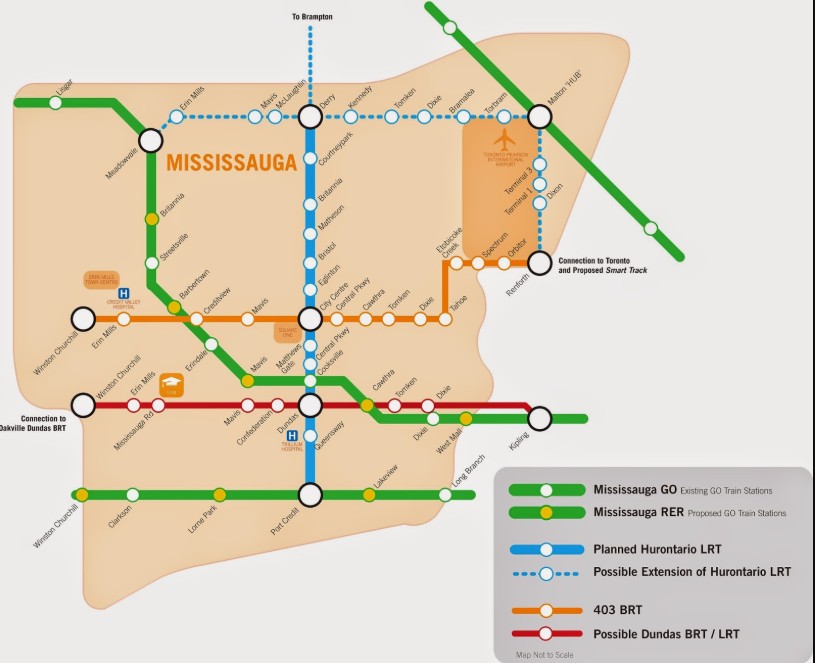 Yet, a particularly bold proposal on the map remains unfulfilled. Crombie’s transit plan for Mississauga suggested adding multiple stations along the Lakeshore West and Milton GO lines. The argument goes that, with electric trains in the future, faster speeds would allow trains to make more stops without increasing journey times. Rather than creating stations with hulking great carparks, these additional stations would be more akin to a subway or LRT stop, allowing passengers to alight from the train and walk to their front door. It depended on Metrolinx bringing all-day, two-way GO and electric trains before it could even be considered.

However, GO is not in Crombie’s hands. Some would argue this was outside the mayor’s capacity to promise, yet government relations departments within cities are strong and the provincially backed Hurontario LRT is proof of the power cities can exert over their provincial and federal partners.

Though the Lakeshore Line is now moving toward 15 minute trains and an electric future, GO’s Milton Line (which cuts right through Mississauga) has been neglected.

“The one that we continue to advocate strongly for, with both provincial and federal government because they both say it’s their [counterpart’s] responsibility, is all-day, two-way GO on the Milton Line,” Crombie told The Pointer. “It would be transformative for Mississauga. If you think about it, the Milton line goes in the wrong direction. I say that all the time, but it’s true. It’s built on an archaic model that had Mississauga as the suburb where people slept and worked in Toronto… the converse is true today – we are a net importer of jobs.” 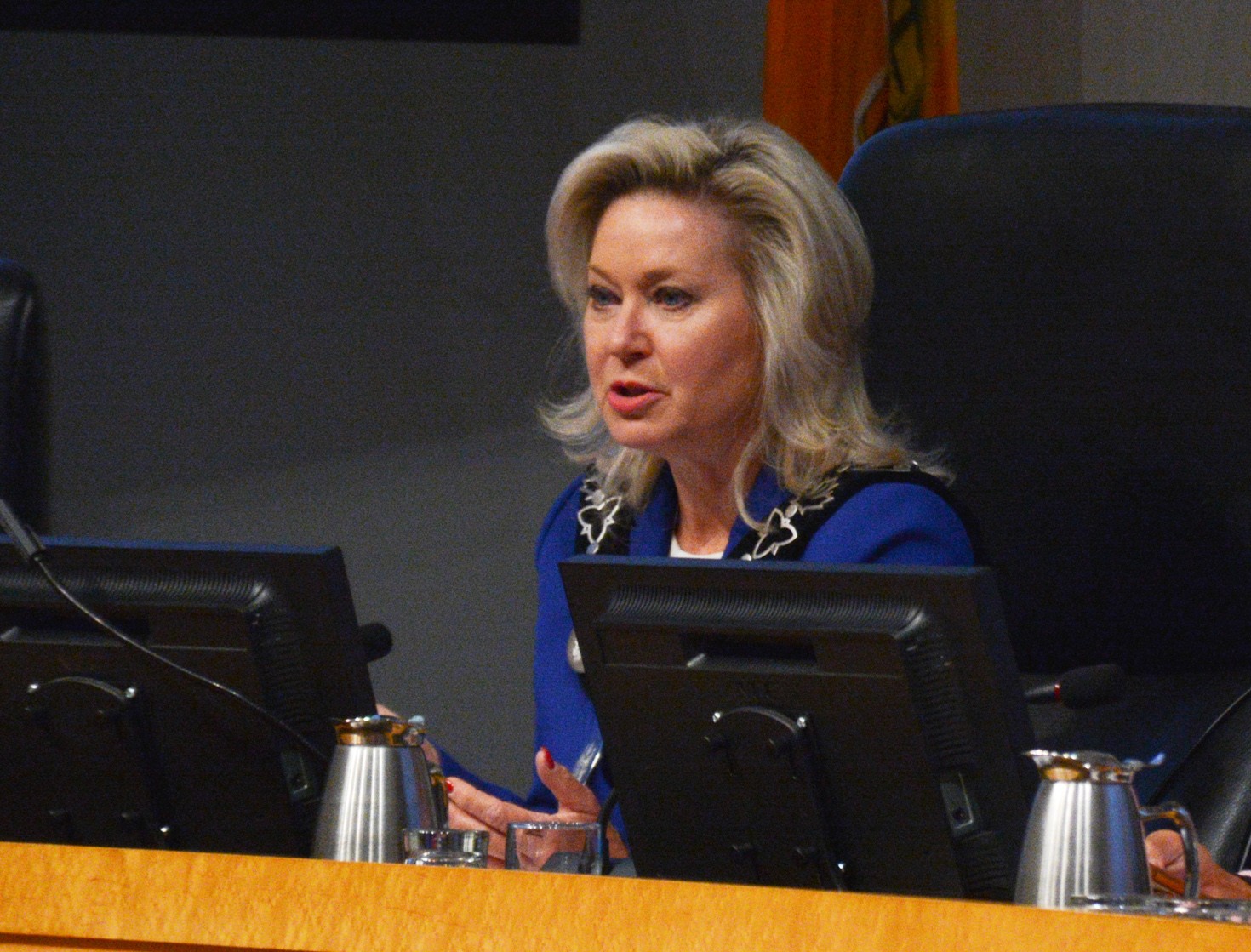 “If you electrify the route you can add more stops… this is the only line they haven’t announced all-day, two-way GO on.”

The issue at the heart of the Milton Line is similar to the problem Metrolinx is dealing with on their Kitchener route: they don’t own it. Instead, CN Rail, in the Kitchener instance, and CP Rail for Milton, own portions of the track which limit the times which GO can use the line and, as a result, run trains. GO’s commuter network of trains is only able to run when freight is not using the tracks.

To fix this, Crombie has been pushing for something referred to as ‘the missing link’.

“We want to open it up for commuter traffic,” she said. “The solution is… build the missing link [next to] the 407 corridor and have CN and CP relocate across the top of the city, rather than through Toronto. CN does it now, they go over the top, they go over the top [and bypass the Milton line]. We would add the CP routes up there, but they’re not willing to do it, they need to be incentivized. [Premier Doug Ford] is very open to the idea, he said ‘we’ll make it happen’, but it’s north of a [$]10 billion fix, I think.” 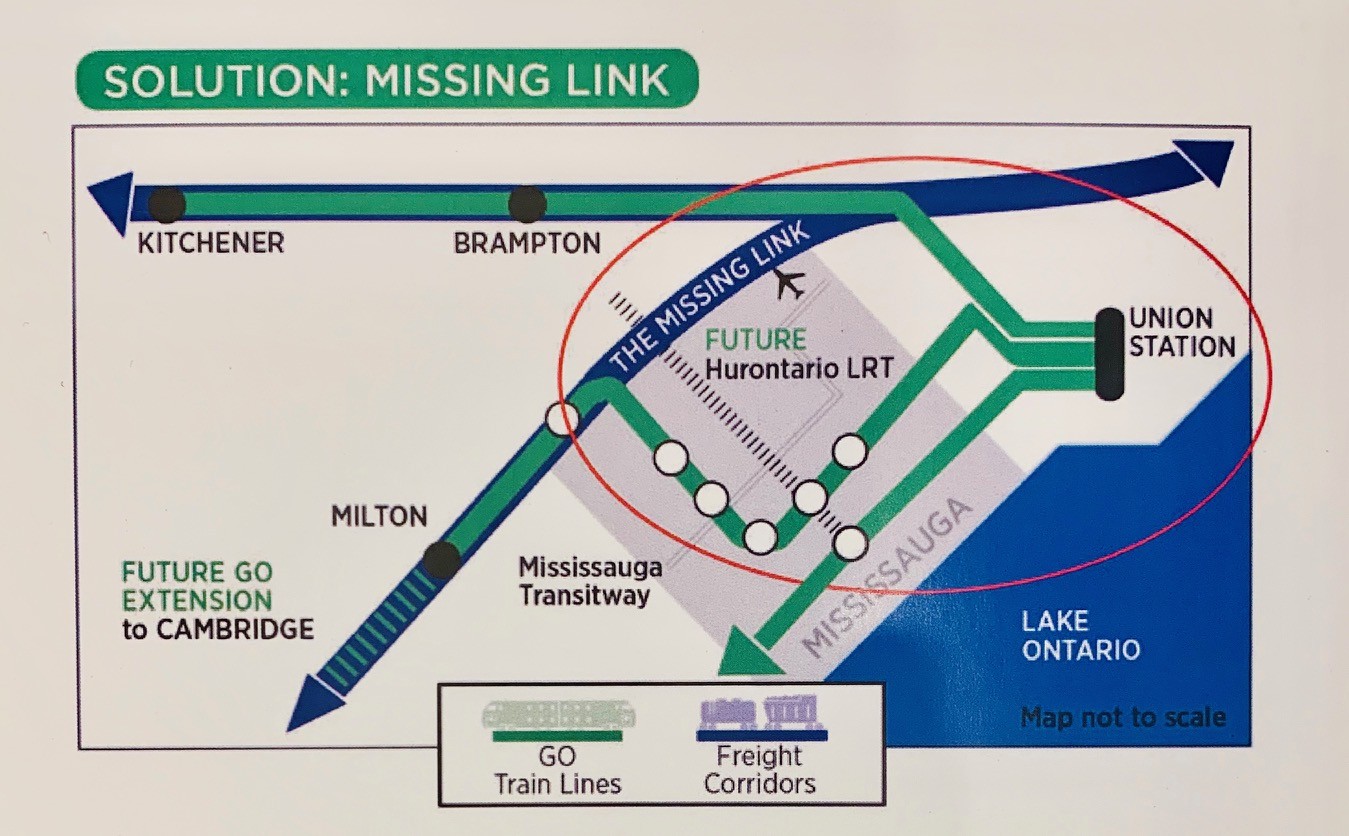 According to a pamphlet produced by the Mayor and city, though, the link is worth the money. Data shows the manner in which the Milton Line has the potential to be the true backbone of Mississauga. According to the city’s figures 4,300-plus of the city’s businesses are located on the line, though those figures are a little outdated. The pamphlet quotes 88,000 businesses in the city, while recent documents put the number at 96,000. It also says that 77,000 plus employees are located in places where the Milton Line would provide transit; 46,000 of those employees would use Meadowvale Station, 9,800 could use Erindale and 15,400 could use Dixie.

However, current GO timetables for the route do not really accommodate all commuters. Though buses run in both directions, regular trains only run into Toronto in the morning and back to Mississauga at night, meaning workers can basically only travel one way. With Mississauga now a net importer of jobs, this suburban hangover is stunting the route’s growth. 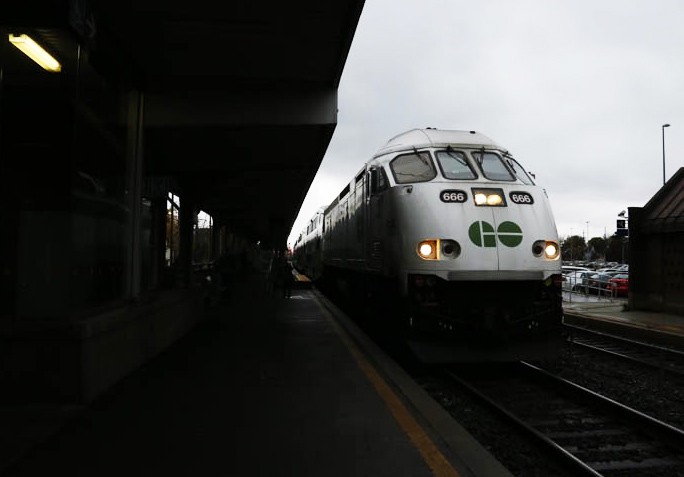 Despite the clearly revolutionary impact which two-way, all-day GO on the Milton Line could have for Mississauga and its economy, Mayor Crombie is adamant that the onus for funding lies with Ford and Prime Minister Justin Trudeau.

“The line is owned by the railway companies, which are federally controlled and the province is responsible for [all] transit, except for buses, and they certainly operate the GO system,” she said. “Our budgets aren’t designed for this large scale, capital intensive project. We’re just not designed for that – they just couldn’t do it on the back of the property tax owner… it’s of national importance [Milton GO]... to reroute it to the north of the city and open the track to commuter traffic.”

Precedent for such a move was set with the Metrolinx purchase of the Lakeshore West line which runs through Port Credit, though, there is little indication they plan to move on the Milton Line anytime soon. In fact, in 2013, Metrolinx’s Big Move (Update) proposed delaying two-way, all-day Milton GO from a 15-year timeline to a 16-25 year schedule. More recently still, a 2017 Halton Regional council meeting heard that the line was “in the post-25 year horizon” for two-way and all-day service.

During a 2019 online townhall, Metrolinx provided a short, uninspiring answer to questions about the service. “Metrolinx does not own the Milton corridor, so we can run our trains only when our freight rail partners are not running theirs,” they said. “But we continue expanding service on the Milton line wherever we can, increasing from 60 weekly trips to 100 over the last 10 years.”

Even a cursory glance at the current GO network ownership map, which says Metrolinx owns 69 percent of the track it uses, shows the Milton Line to be the most significant route to have no real GO ownership at all.

With the future relatively bleak on the Milton Line for now, there is a chink of sunshine breaking through for Mississauga at the airport. Just a few weeks ago, Pearson Airport released its white paper for a project it is calling Union Station West. The plan, backed by the airport in consultation with Metrolinx, sets out a way to make Pearson southern Ontario’s second regional transit hub, after Union Station proper in downtown Toronto.

Though this project would not increase frequency on the Milton Line, it could unlock unprecedented public transit potential within Mississauga.

As the city’s most recent economic development report suggested, Toronto Pearson Airport is the city’s biggest asset, yet it is inaccessible for those relying on public transit. The area around the airport provides the second largest number of jobs in the entire country, with only downtown Toronto hosting more. Yet, for most living in Mississauga, MiWay’s airport service or a series of GO trains is the only way to get there.

According to the airport, just 14 percent of their workers commute using public transport, that’s below even the Mississauga average of 18 percent and woeful for an aerospace centre which should be responsible for connecting southern Ontario with the world. For those living at GO transit stations in Mississauga, it is necessary to go all the way into Toronto to switch to the UP Express, grab a taxi or take a combination of buses. Under the new airport hub plans, that could change.

The white paper outlines a series of transit connections which could unlock Mississauga’s transit potential and its airport in one move. A rudimentary map provided in the white paper shows a series of routes intersecting through the airport, cutting down travel times for those in Mississauga and massively boosting connectivity. The planned 407 rapid transit route, the Eglinton West LRT, the Kitchener GO Line, the Mississauga Transitway and the UP Express are just some of the routes which could pass through the airport.

“There are countries and cities where the airport is outside the main city and they’re named after that city – that was a missed opportunity,” Crombie told The Pointer. “The UP Express gave connectivity to downtown Toronto, but did nothing to us. We’re still taking either a taxi, a car or a bus to Mississauga. We are certainly [lobbying for the creation of Union West], it is necessary, but once again, who is going to pay for it?”

Though it is still early for Union Station West, the airport has already tendered a design contract and tentatively said it hopes the first phase will be completed by the “early 2030s”. Though detailed funding conversations may still be a couple of years away.

With Mississauga looking at a lengthy wait for the electrification of all-day, two-way GO on its critical Milton Line, the idea of hosting a major transit hub for the entire region by the 2030s offers a positive alternative to help with navigation. For a municipality aiming for denser, transit-oriented growth and ambitious climate targets, a transit game-changer is key.

With much of Bonnie Crombie’s transit map en route to becoming a reality, the regional GO line is letting the side down. However, with the mayor clear that the city won’t be coughing up to help push the project along, the people of Mississauga will have to wait. Though Doug Ford has said he’s open to the idea, the shock cancellation of the Hamilton LRT project by the province due to rising costs suggests that there is a reluctance to invest in public transit in Ontario.

It is action and not words which the tens of thousands of airport workers or Milton commuters are waiting for. Yet, despite their obvious benefits, few politicians are clamouring to fund expensive public transit projects in Ontario.