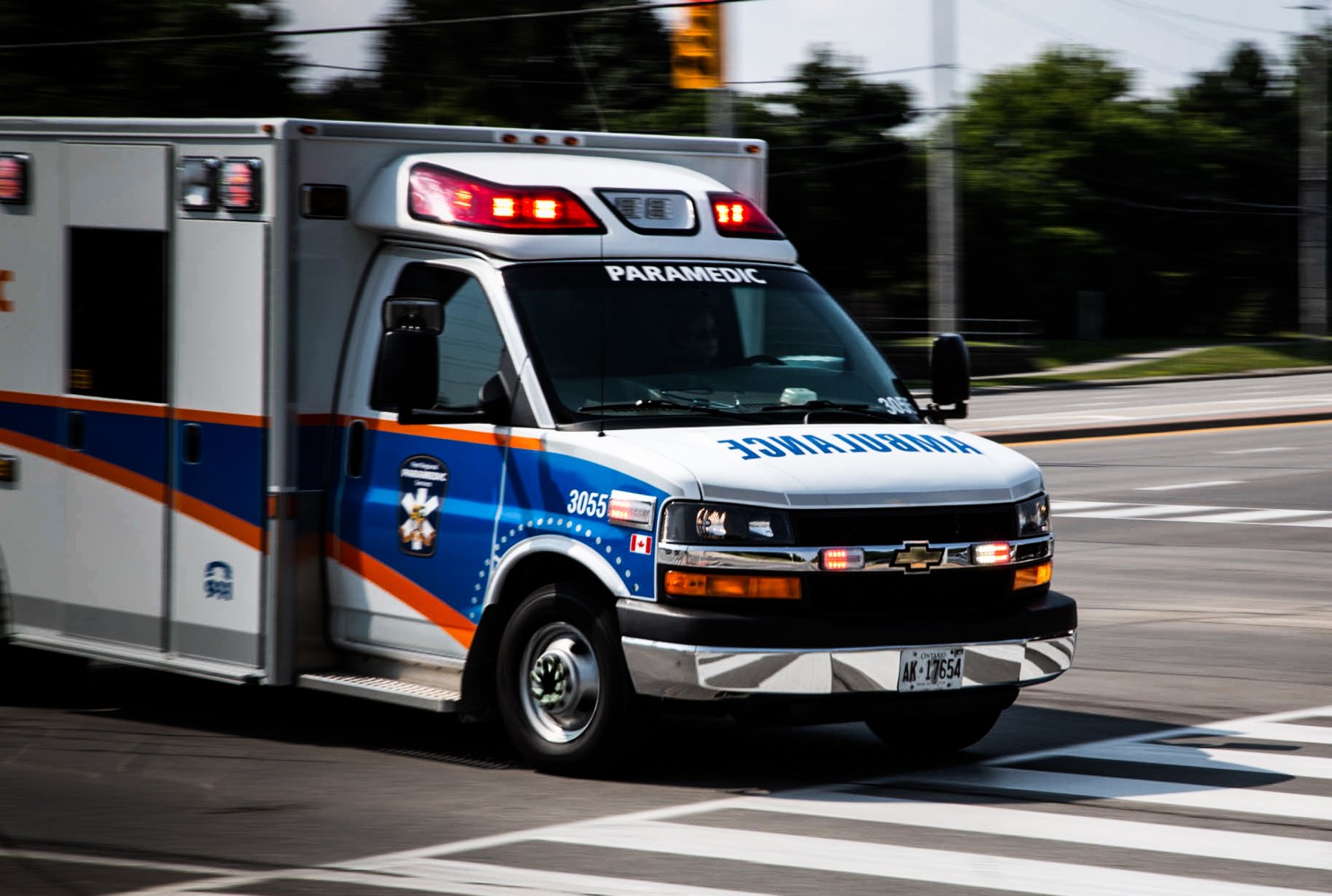 In 2017, the Ontario Liberals passed a safety standard for paramedics in the province to wear a particular type of helmet. Two years later, an arbitration ruling in Hamilton has raised questions about the right to religious expression, while also showing that few services adopted the standard.

Documents from the arbitration between a Sikh paramedic and the City of Hamilton Paramedic Service show that the new helmet under the requirement does not work with the respiratory mask that seals over a beard. With the kesh (unshorn hair) a requirement for baptised Sikhs, and others who keep a beard as part of their religious identity, this threatens the Charter rights of some paramedics across the province. 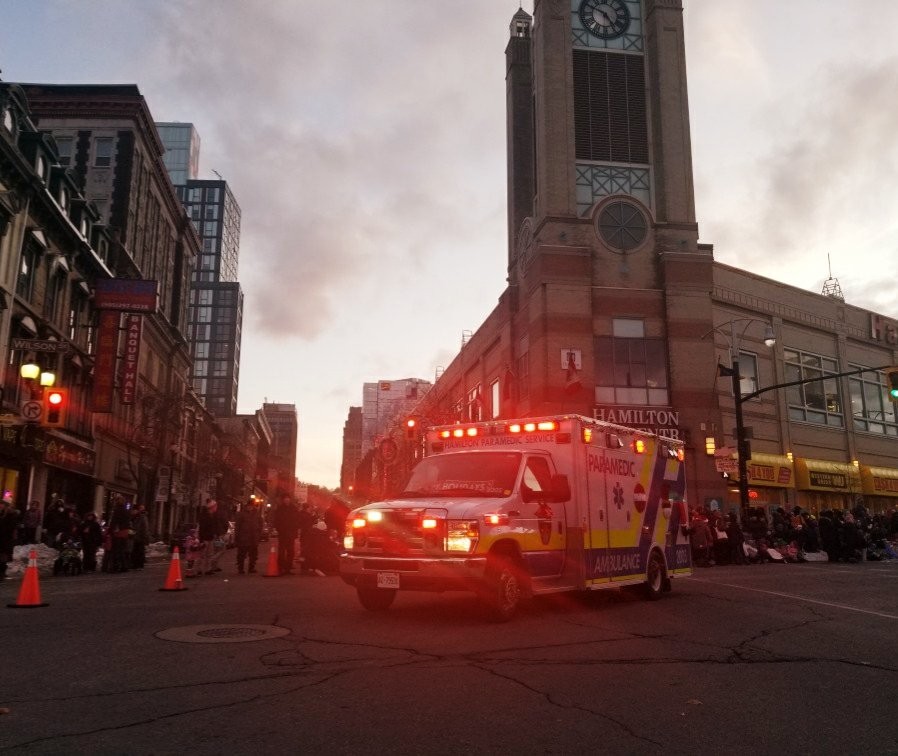 In Peel, the paramedic service has not updated its helmets to the new standard and because of the lack of compliance is technically at odds with the province, though any action is highly unlikely. By maintaining its old helmets, it is able to allow its 22 Sikh paramedics to work on the frontlines and maintain a beard (it’s unclear if all of them are bound to do so by their individual religious commitment).

The Hamilton arbitration, which ruled that as a result of the province’s standard the city’s paramedic service could not meet safety standards and its human rights obligations, throws the spotlight onto a two-year old rule.

Normally, the province requires that paramedics wear N95/P100 respirators in situations where there are airborne dangers, equipment which does not work if the paramedic has a beard. In the past, paramedic services have maneuvered around this by providing Power Air Purifying Respirators (PAPR) to their workers as they work successfully for those with a beard.

When the province changed the rules two years ago, though, a practical problem arose. In changing the helmets worn by paramedics from a Type 1, Class G to a Type 2, Class E safety helmet, the PAPR equipment was no longer compatible. Type 2, Class E helmets do not work with PAPR breathing equipment and there is no known technology which will allow the helmet, a beard and breathing equipment to coexist safely.

Where there had been a workaround for paramedics with a beard before, the technology appears not to exist for that to work with the Type 2, Class E helmets.

Although Peel has not met the new standard, Hamilton upgraded its equipment along provincial guidelines. This led to one paramedic launching a challenge on the grounds that his employer was limiting his right to religious expression. The paramedic in question, Harkarn Sihota, is one of the Sikh paramedics who now works for Peel’s service and was previously working in Hamilton part time.

The arbitration ruling said the province had set up a “roadblock” putting Sihota’s employers between a rock and a hard place. 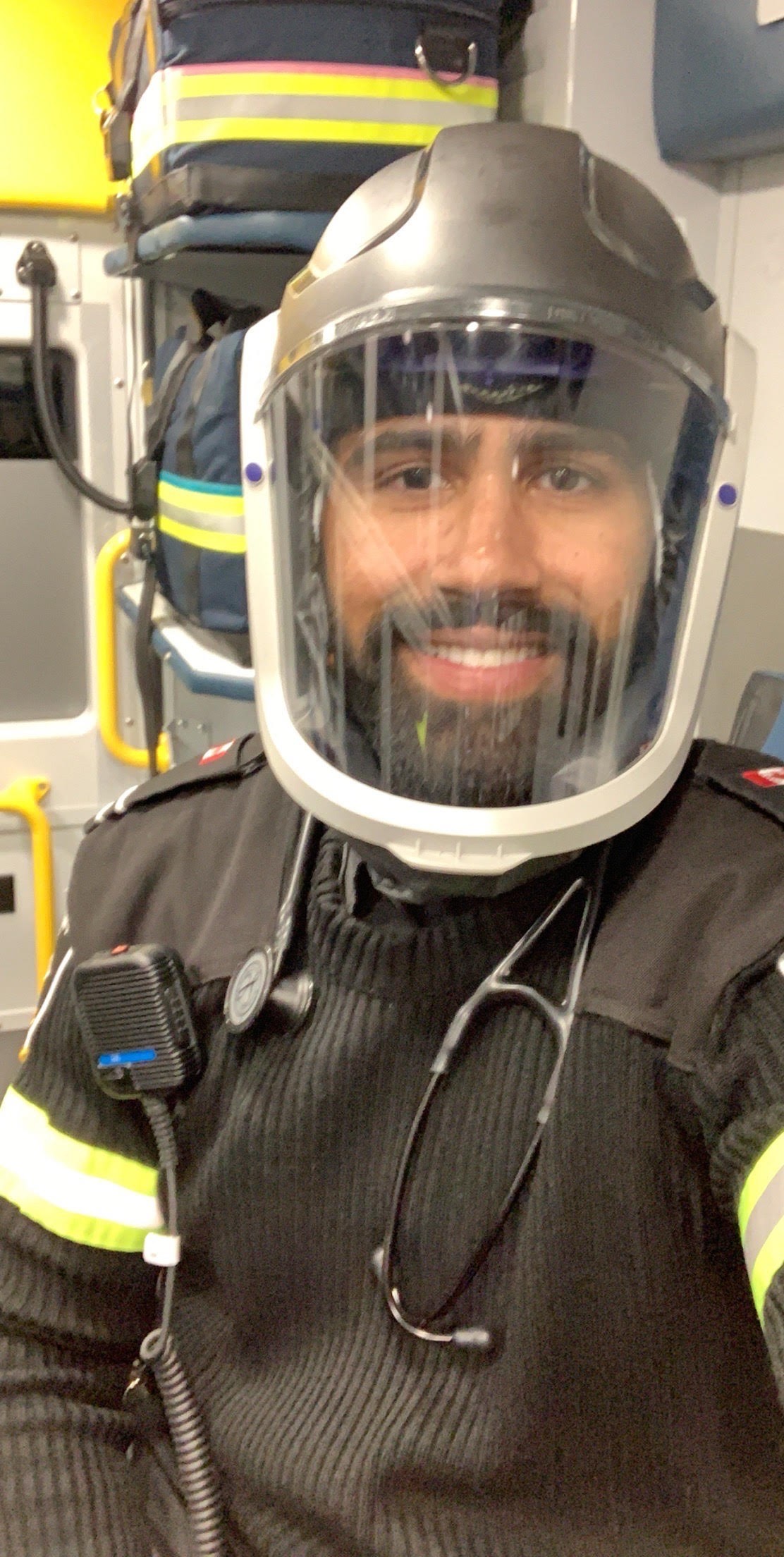 The requirement for new helmets and their incompatibility with beard-friendly breathing equipment has left paramedic services across the province having to choose between denying religious rights or potentially defying the Ambulance Act and facing a conflict with the province.

Through the evidence provided in the Hamilton case, facts were laid out which show the province’s 2017 helmet decision offers little in the way of upgraded safety, while blocking the religious rights of some members.

“I think that the current government has an obligation to fix this,” Dave Wakely, local paramedic union president, told The Pointer. “This is clearly a requirement that has negative and racist consequences and it needs to be fixed. Inclusive design is important and that is always the first step, employers [currently] have to take a risk by not complying in order to not violate the Ontario Human Rights Code.”

Wakely plans to take action by writing to local representatives and lobbying them to help change the recent rules.

There are several factors which suggest the 2017 safety decision has little practical benefit. For one, it is extremely rare for paramedics to wear protective headwear and breathing equipment in the same situation. Generally, breathing equipment is used when a patient has a respiratory illness or a highly infectious disease, while helmets are worn when there is a danger of falling debris or at scenes such as road accidents. According to data included in the Hamilton case, just 200 to 400 calls out of 800,000 per year required both breathing equipment and a helmet to be worn, .038 percent of calls. 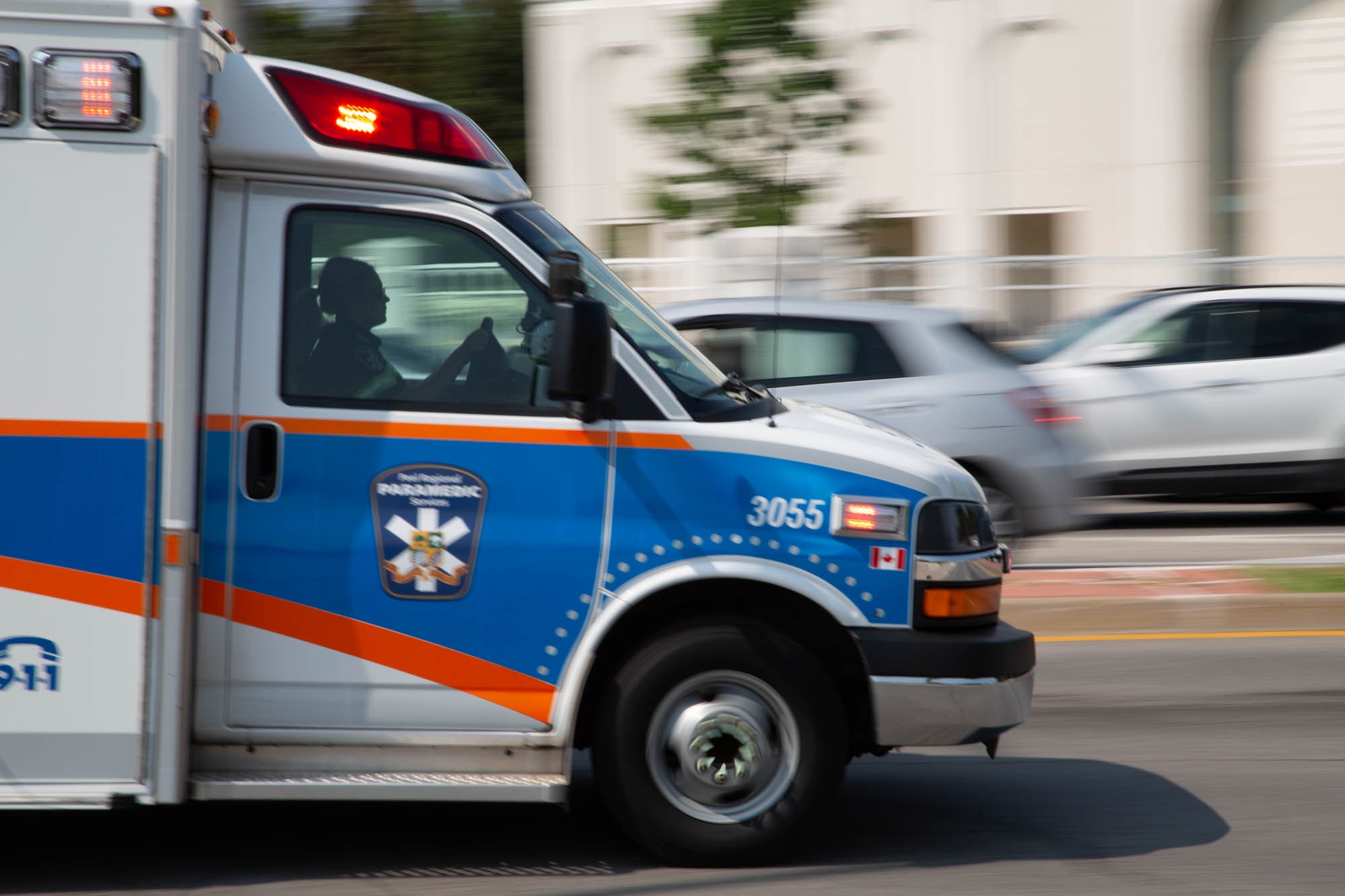 In correspondence with the province, Hamilton’s chief suggested that the use of a Type 2, Class E helmet was “unnecessary for the safety of paramedics and also has an adverse effect on the religious rights of one of our paramedics,” something which would also seem true in Peel.

It is Type 1, Class G helmets which are the prescribed equipment for Ontario firefighters, while the Hamilton chief said that the higher grade helmets were “unreasonable” because paramedics were advised to avoid dangerous or unsafe environments until police and fire fighters deemed them safe to enter.

Despite its helmets still not in compliance with the new standards, there is no evidence Peel has been faced with any warnings or disciplinary action from the province. Speaking to The Pointer, a spokesperson for Peel Paramedic Service said it would continue to operate without changes while it reviews the situation.

“Peel Paramedics have not fully analyzed the ruling from the Province, so we cannot immediately comment on its application to us,” the spokesperson said. “Until that work is complete, we will continue to stand by our decision to allow the use the Power Air Purifying Respirators (PAPR) to support our employees requiring one for Religious or Health Reasons.”

“The health and safety of paramedics in Ontario are of primary importance to us,” a spokesperson for the Ministry of Health told The Pointer. “The ministry has been made aware of the Sihota arbitration and is closely reviewing the decision. We are working with our partners in the Ministry of Labour and the paramedic service involved in this matter.”

“We will communicate any further steps shortly.”

In the Hamilton case, Michael Speers, a paramedic in Peel who also sits on the Canadian Standards Association (CSA), said the helmet standards the province had implemented in 2017 simply don’t apply to paramedics. He said he had never come across a situation where the Type 1 helmets were “inadequate” and, in essence, that Type 2 helmets were inappropriate for rescue operations.

“The Ministry of Health has referenced a CSA helmet standard for paramedic use, [but] the CSA standard referenced does not apply to rescue helmets and it says so right in the standard,” he told The Pointer. “The standard is for general industrial construction protective helmets.”

The difference between the helmets is two-fold. According to the CSA standard, Type 2, Class E helmets are intended to prevent certain head trauma while also providing protection from electrocution. The argument, though, is that paramedics do not find themselves in situations where this level of protection is required.

The lack of practical sense applied to the province’s rules is made clear by the arbitrator’s decision in the Hamilton case. “The Grievor and this Service find themselves in a virtually impossible position,” it reads. “The Service wants to accommodate the Grievor. While it had initial operational and practical concerns about the use of the PAPR, those concerns were eclipsed by the realization that the PAPR could not be used with a helmet that complies with the Ministry standards that were changed at the end of December 2017. If the Service had provided the Grievor with a PAPR with its previously mandated helmet, it theoretically risked sanctions from the Ministry… The evidence presented to me suggests that the previous helmet standard did not jeopardize any paramedic’s or patient’s health or safety. Further, the evidence indicates that the frequency for the need for a combined helmet and respiratory device is rare.”

“It is hard to understand why paramedics are being required to wear protective equipment that exceeds the requirements set for firefighters’ helmets,” the ruling adds.

Though paramedics in Peel have been able to practice their religion and their job at the same time, the existing rules appear to jeopardize this.

“To exclude capable and valued paramedics such as this Grievor from performing to their full potential for Land Ambulance Services is an intolerable result,” the ruling points out.

With the 2017 decision made by the previous Liberals, many in Peel will be hoping PC MPPs in Brampton and Mississauga are able to lobby to have the rules reverted back. The local paramedics union is also behind such a move.