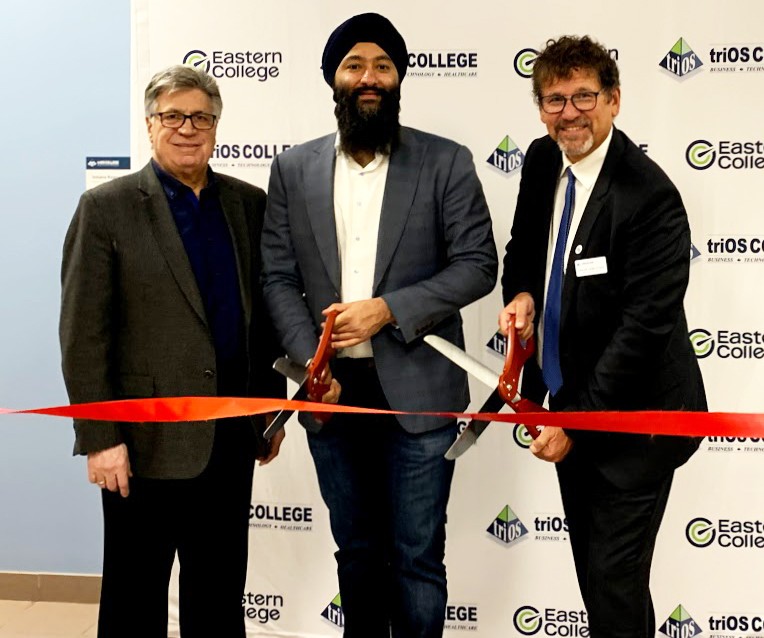 Photos by Isaac Callan/City of Brampton

Nestled on the edge of Queen Street in Brampton in the location of a former Hooters restaurant is triOS College, part of the growing post-secondary education scene in the city.

It is a scene that does not include a full-standalone university campus, as Brampton remains the largest city in Canada without such a feature.

Despite this glaring lack of an ultimate post-secondary option, others are stepping in to fill the void. Last week, triOS welcomed Associate Minister of Small Business and Red Tape Reduction, Prabmeet Sarkaria (MPP Brampton South), to cut the ribbon on its most recent expansion.

The changes at triOS College are part of a plan which will welcome hundreds more students to the private education facility in Brampton, where they can complete certifications in various subjects including paralegal and law clerk work, massage therapy, information technology and police foundations.

“This means a growth opportunity for us as an organization and this for Brampton is going to mean more jobs and more students who are going to live here,” Frank Gerencser, CEO of triOS College, told The Pointer. “[It means] more housing they are going to occupy and more events and things that they’re going to… For them [the students] this is the perfect kind of school to be able to come for and so I am proud to be able to grow here in Brampton.. It’s a first class campus, we have very low default rates because the majority of people who are here they are here for school, they graduate, they get a job and they pay back their loan. We have high graduation rates; we have high job placement rates.” 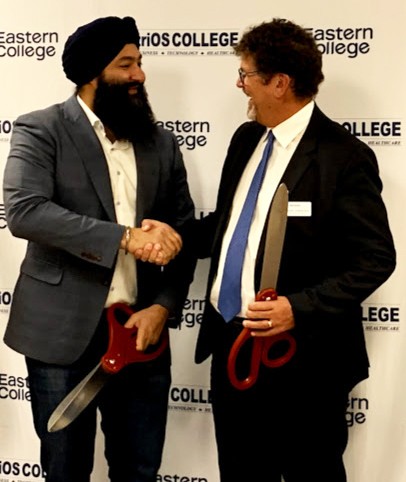 The expansion of triOS College, which includes new classrooms, a community area and refurbishments to areas of the building such as washrooms, was finalized just days after Brampton City Council announced its plan to launch its own public university.

In a promotional video, Mayor Patrick Brown, and Councillors Rowena Santos and Harkirat Singh explain the plan. “Brampton is one of Canada’s fastest growing and youngest cities,” Santos says in the video. “We have thousands of youth exploring career options, looking for new training and learning. We are home to great businesses looking to fill jobs today and anticipating needs for the jobs of tomorrow, but we don’t have a full university of our own in Brampton.”

Also speaking in the video Brown says the city has made great progress through partnerships with post-secondary partners such as Sheridan College, Ryerson and Algoma University. “Now we are proposing a new, innovative solution, BramptonU, a city led effort with the goal to get provincial approval to launch our own, fully accredited university right here in Brampton,” he explains. 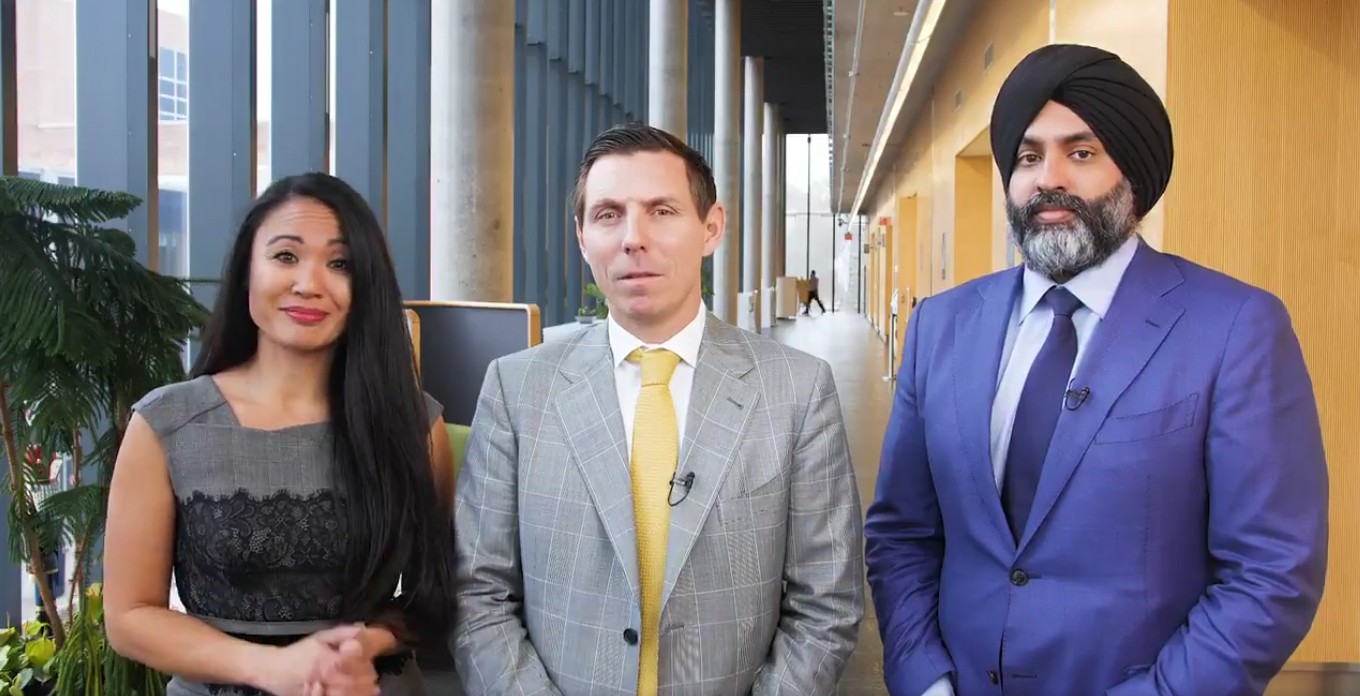 The ambitious plan is just the latest twist in the saga of Brampton’s quest for a university.

The city’s plan had a wrench thrown into it last year, when  funding for Ryerson’s satellite campus next to the downtown GO station was cancelled by the Doug Ford PC government, which withdrew $90 million committed by the previous Liberal government. The cut, which came alongside similar decisions in Markham and Milton, left planning for the project in limbo.

In January, The Pointer reported Ryerson University was pulling out of the campus plan after the loss of funding. But Ryerson stood by the city and chose to deliver some programs in Brampton. In particular, the university and city are working together on courses through the innovative digital security Cyber Secure Catalyst program, which benefited from federal funding, as well as its Chang School of Continuing Education. In April, Algoma University proceeded with its plan to increase its presence in the city and deliver more courses.

Then, during the federal election campaign, the NDP announced its promise of a university campus for Brampton, alongside a hospital, but ultimately its unsuccessful campaign to unseat the city’s Liberal incumbent MPs left little hope of seeing those promises come true.

Now, as triOS College cuts the ribbon on its expansion and Algoma University plans to double its presence in the city by 2023, council has decided to take a hands-on approach.

The branding around the soft launch of BramptonU is slick and its website is a step-up from the standard portals the city uses to solicit public feedback. The statement sent by the marketing alone is that this is a serious priority for council — perhaps a policy which members hope to consider as part of their legacy in municipal politics.

Behind the impressive marketing, lie several questions, none of which have easy answers. The list of things which the BramptonU website says it “needs” is fairly significant. “Support from the Brampton community” is straightforward, though getting the province to “commit funding and pass legislation” to launch the project is no easy feat, while establishing “the right partnerships” to launch the academic programming planned offers a significant task as well.

The BramptonU campaign, though, sounds positive in its hopes of receiving provincial support, despite the cancellation of its previously planned Ryerson campus. The website reads: “We’ve had very positive feedback from the Province on our new approach to bringing a full university to Brampton – and we’re investing energy, time and money to turn that positive feedback into positive decisions.”

Interestingly, the BramptonU campaign says that Brampton South MPP, Prabmeet Sarkaria, along with Amarjot Sandhu (Brampton West) are “supportive” of the plan and are working with the city and province to move discussions forward. Though positive news for the city, this commitment should perhaps be taken with a grain of salt since both MPPs did little to oppose the cancelling of the province’s $90 million campus funding commitment.

Asked at the triOS College ribbon cutting what the province could do to help post-secondary education in Brampton, with reference to BramptonU, Sarkaria said: “We want to make sure that when we have individuals that are taking education, we want to make sure that there’s a job for them at the end of the line. I think triOS [College] is doing a good job of connecting those people, especially when they're in their careers and they want to a make shift. We want to be partners with the colleges and see how we can support them.” 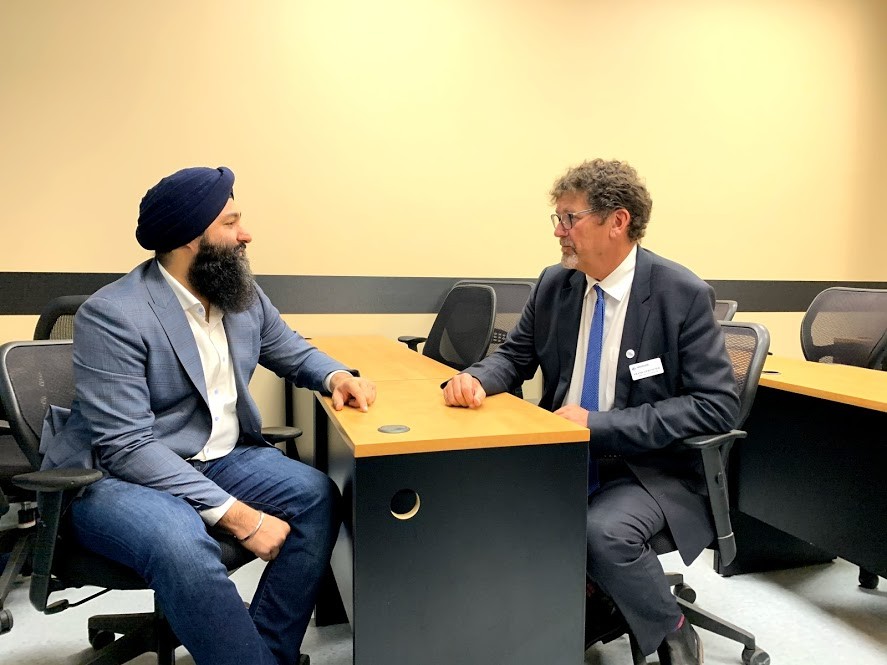 Speaking in July at a Brampton event, the MPP went into further detail on the issue of a Brampton specific university, defending the province’s decision to kill off the city’s campus. “I’m going to continue to fight for the [Brampton] university,” Sarkaria said at the time. “Everyone wants to see the university. We just have to recognize that we’re in a $15-billion deficit per year, which we have now reduced, and the fiscal limitations on the province.”

Reading between the lines of just a couple of the associate minister’s words on the issue, it seems that Sarkaria is supportive of a university in Brampton, but he seems less keen to help loosen the provincial purse strings and deliver the project in its entirety.

Regardless of the exact budget considerations for MPP Sarkaria, there is no question that political will is key to Brampton’s post-secondary dreams.

Algoma University, the youngest university in the province as it stands, is an example of the length of the process and its complexity. The university went from being Algoma College to University in 2008, following a different route to Brampton’s plans. However, with its relatively recent creation as a university, the example does provide some useful context.

According to the Algoma University's website, the organization sent its first charter application for independence to the Minister for Education and Training in 1994 only to have it knocked back. More than ten years later, it made another approach to the province, this time with more success. In 2007, the Ontario Liberals announced their support for the university's independence, which was granted the next year.

“The process is complex and the situation at Algoma University is different to the situation the development BramptonU would follow,” Brian Leahy, Director of Communications for the university, told The Pointer. “We developed as a university college affiliated with Laurentian University and then in 2008, after 40 odd years of development in the post-secondary sector [and] through an act of legislation known as the Algoma University Act (or Bill 80), we became independent.”

Leahy did not suggest that this process necessarily offered an advantage to Algoma over BramptonU, though the existence of infrastructure, an academic senate, student base and board of governors must surely have helped. Not drawing direct parallels between Algoma’s birth as an independent university and BramptonU, Leahy praised the “efforts” of the city in the post-secondary sphere thus far, identifying political maneuvering as key to securing a university.

“There’s definitely a heavy political element to it, so you’re definitely going to be working hand-in-hand with the bureaucrats and the politicians,” he said. “Any school, no matter if it was setting up in Brampton or elsewhere in the province, it would definitely require heavy dialogue and complex dialogue on both the need and the funding elements for an institution.”

With the launch of BramptonU, the city’s intention is clear, though the process is less so. The Academy of Sustainable Innovation has been hired by the city to explore the plan and will provide a full business case for the province in the spring of 2020. Questions this business case will need to answer range from concerns around housing capacity in the city through to what gap in the education market BramptonU would fill.

With big asks such as the LRT already on the table and severe issues around affordable housing which plague the whole GTA, the case presented will have to be rock solid to begin a dialogue with Queen’s Park.

However, if there is anyone qualified to take on that role, it is probably Mayor Brown. With significant experience at the provincial and federal level, he’s a politician who understands how to lobby and how to work the system. Where calls to fund the city’s LRT may be premature with an EA yet to be completed, calling for the province to support post-secondary education in the city may be more successful. If the branding around BramptonU is a reflection of the commitment which will be applied to this bid, Brampton could be in for a welcome surprise.