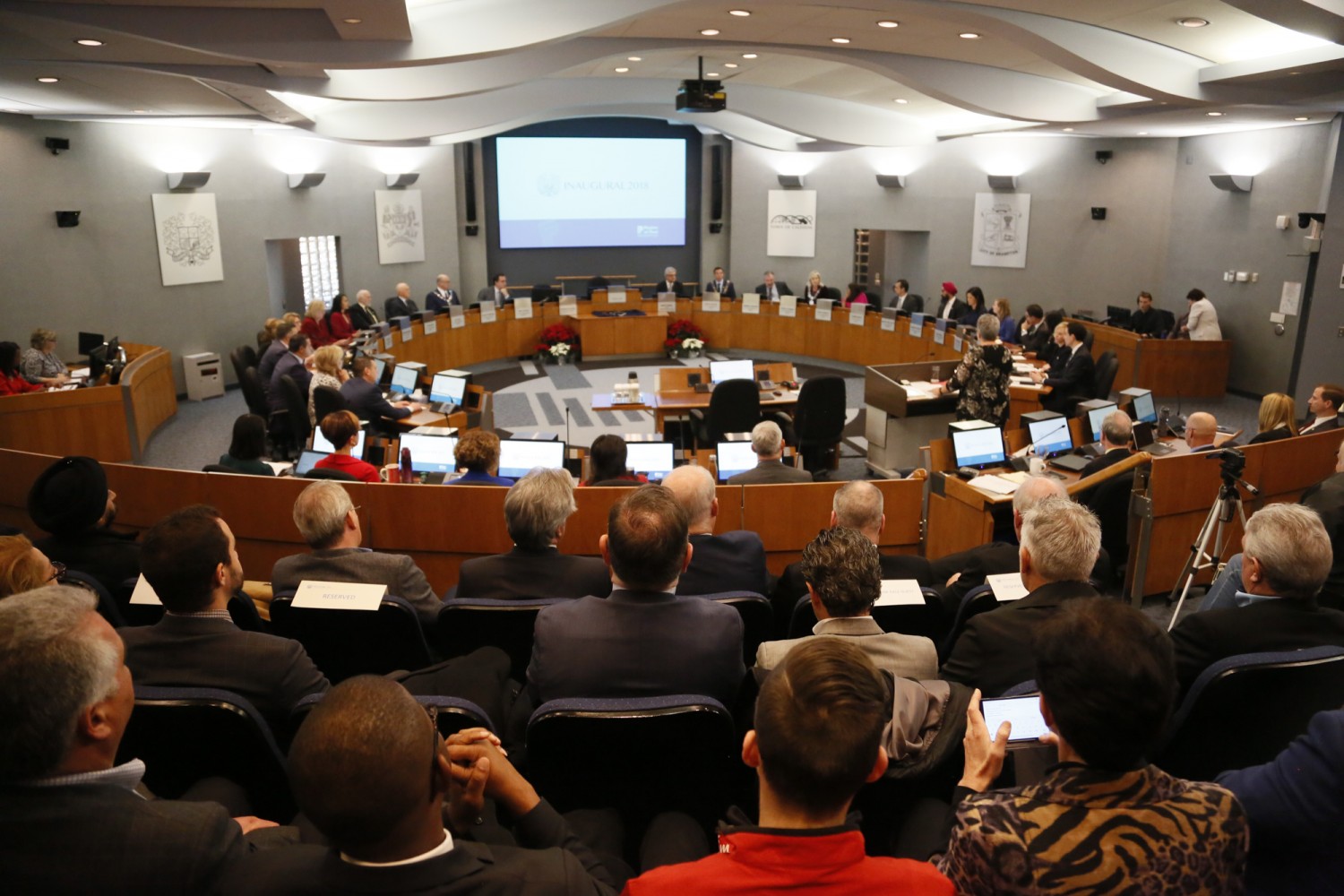 The Pointer file photos/Graphics from the Region of Peel

With razor thin margin, regional council hints at further changes to budget that could put services at risk

Mississauga’s regional councillors didn’t expect to be discussing the 2020 budget in Bramalea, something they made clear to their counterparts from Brampton and Caledon.

The city, which had hoped to exit the Region of Peel sometime in November 2019, has a host of issues with the set-up. Councillors representing the province’s third largest municipality believe they’re subsidizing development and services in Brampton and Caledon through their higher tax base in an outdated, two-tier municipal system.

However, Doug Ford torpedoed Mississauga’s dream of independence in late October, leaving them back at the regional table. As a result, city councillors - including Karen Ras, Carolyn Parrish and Pat Saito - sharpened their knives and/or pencils to begin probing areas of the regional budget which could be cut.

Though no decisions were made at Thursday’s meeting, a few things were established. Thus far deliberations are ramping up to be The Mississauga Show, with its councillors speaking far more than the rest. Meanwhile, provincially downloaded programs (where child care, public health and long term care are the hardest hit) and Peel Regional Police appear to be among the options considered for “efficiencies” and “consolidation” - two political synonyms for cuts.

Aside from Brampton Councillor Michael Palleschi, who piped up to ask if the delayed approval of Brampton’s budget until February would be an issue, the floor was clear for councillors from Mississauga. 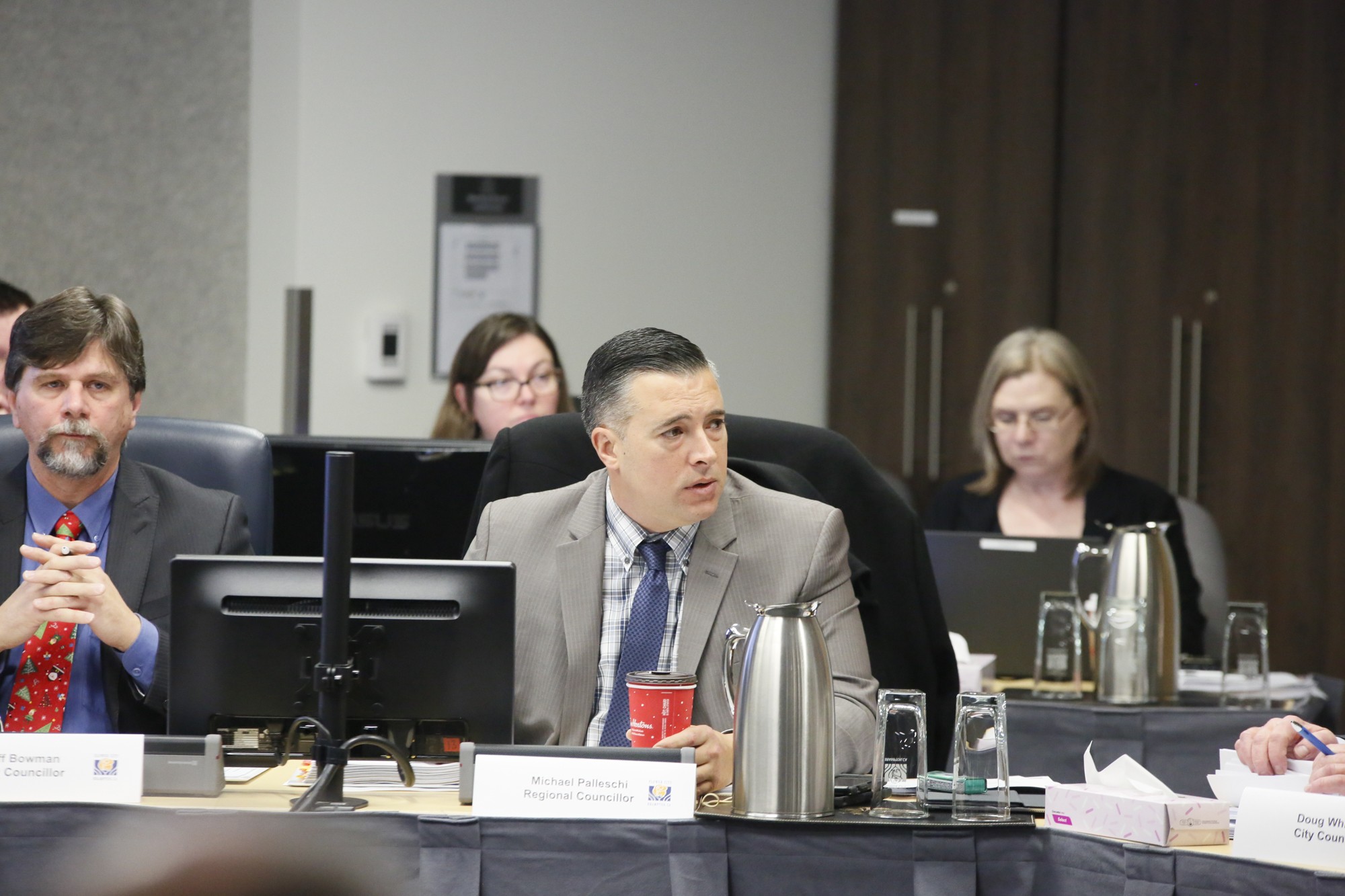 Pat Saito laid the city’s battle lines early in the meeting, calling the average tax impact in the document “confusing” since it was calculated across Mississauga, Brampton and Caledon. Where the average tax impact of the region’s proposed budget is listed at 1.7 percent, it is actually 2.1 percent for Mississauga, 1.5 percent for Brampton and 0.8 percent for Caledon, largely because of the town’s use of the OPP instead the region’s police service. Residents could also be facing a 6.5 percent increase on their utility bills.

Establishing the narrative that Mississauga pays more than its fair share, she said: “I think it’s very confusing for citizens to see 1.7 percent on the property tax increase, particularly in the report, in the largest print you could possibly think of… I find that very confusing and I know our citizens do as well.”

The proposed budget by staff at the region consists of a $2.6 billion operating budget and $1.1 billion capital plan, a significant portion of which represents business as usual. Contributing to the budget’s 4.3 percent year-on-year increase are a 0.9 percent bump attributed to further downloading from the province, 0.6 percent to public safety and police, 0.4 to “council priorities” such as youth hubs, 1 percent represents an infrastructure levy and 1.4 percent is to maintain services. 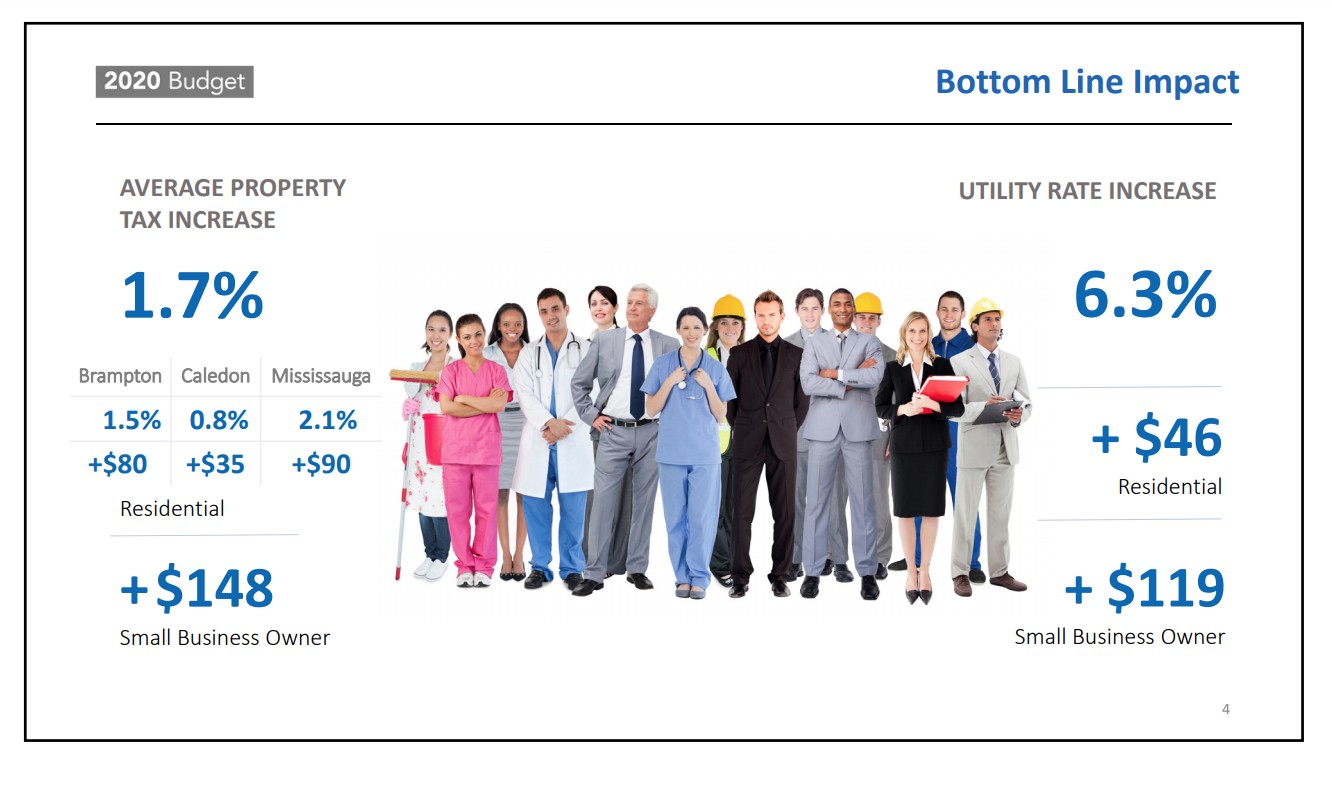 The final impact to ratepayers will depend on the budgets of their local municipalities which will eventually be blended with the tax increase from the region (the final increase depends on which of the three cities a property owner lives in and what the approved regional and municipal rates come in at). The proposed regional increases alone would amount to an additional $83 in taxes on the bill of an average homeowner (for a home assessed at $545,900), and $46 more in utilities. For the average small businesses it means  $148 more in taxes and $119 in utility costs for the upcoming year.

Council’s intention was made clear during their last council meeting, when Councillor Dipika Damerla introduced a motion - seconded by Brampton Mayor Patrick Brown - to reduce the average tax impact from a 1.7 increase percent to 1.5. The motion, put on the floor and approved before the budget document was even public, set the tone for negotiations which will continue through December as Peel hashes out its budget priorities. 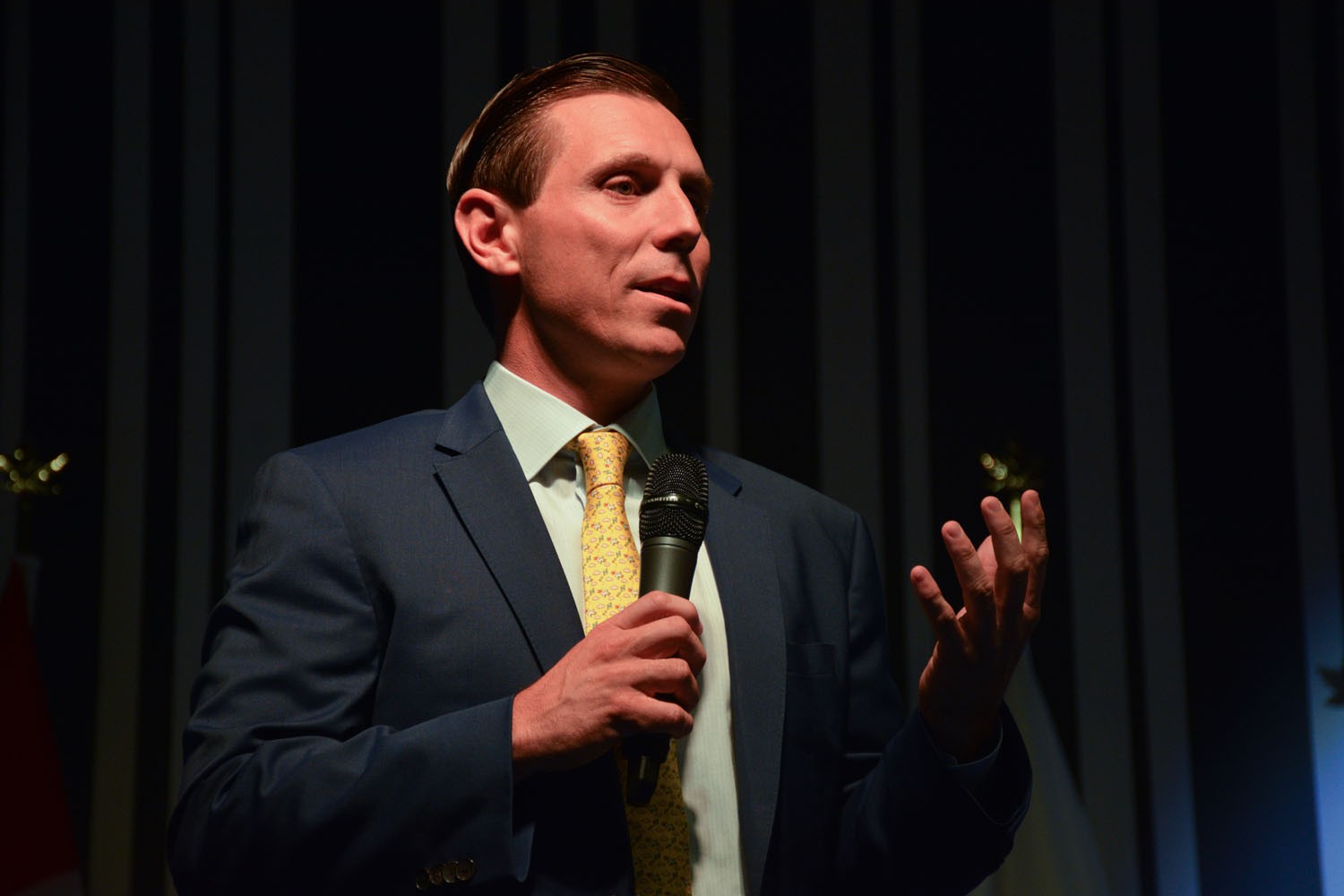 The budget document itself illustrates how hard it will be to find genuinely meaningful efficiencies without cutting service levels and hurting some of the poorest and most vulnerable in the region.

“The levels of investment proposed in the 2020 Capital Budget and Forecast are required to maintain the Region’s infrastructure at Council’s level of service targets,” a staff report reads. In this simple line, staff have made the issue clear: there’s no meat in the budget, it’s already paired down to the bone.

If councillors want to get the tax impact lower, to the suggested 1.5 percent - for example, a loss or reduction in services could be the eventual result.

With only a fortnight to respond to Damerla’s slimming motion, staff came up with a vague list of areas which could face the chop, with further detail promised at the next budget session, Dec. 5. The relatively small list includes the option to “end tax subsidy of water/wastewater services,” which would imply passing the fee on as a utility price hike, extending the “phase-in” of funding for community hubs, suggesting $3 million for Malton’s long awaited community hub could be on the chopping block, along with “revisit[ing]” provincial funding.

Saito said she was “disappointed” with the police budget’s request for 35 additional officers, while Councillor Parrish - advocating for Peel Police to be funded based on usage, as the OPP does in Caledon, also appeared to be against police increases. “Everyone says we shouldn’t touch the police [budget] and we should leave them alone,” she said, adding that the new chief is known for innovative redeployment.

Also at the meeting, Mississauga presented research from their staff, based on a previous report by Ernst & Young, which advocated for changing the Peel Police funding model. The current system means that the police budget is simply funded from regional tax dollars, something Mississauga wants to change. As a larger city with higher property evaluations than Brampton, some argue they are subsidizing their neighbour’s police usage and councillors such as Carolyn Parrish are advocating to move towards a police funding model based more closely on usage, something staff think could save Mississauga taxpayers more than $60 million per year. 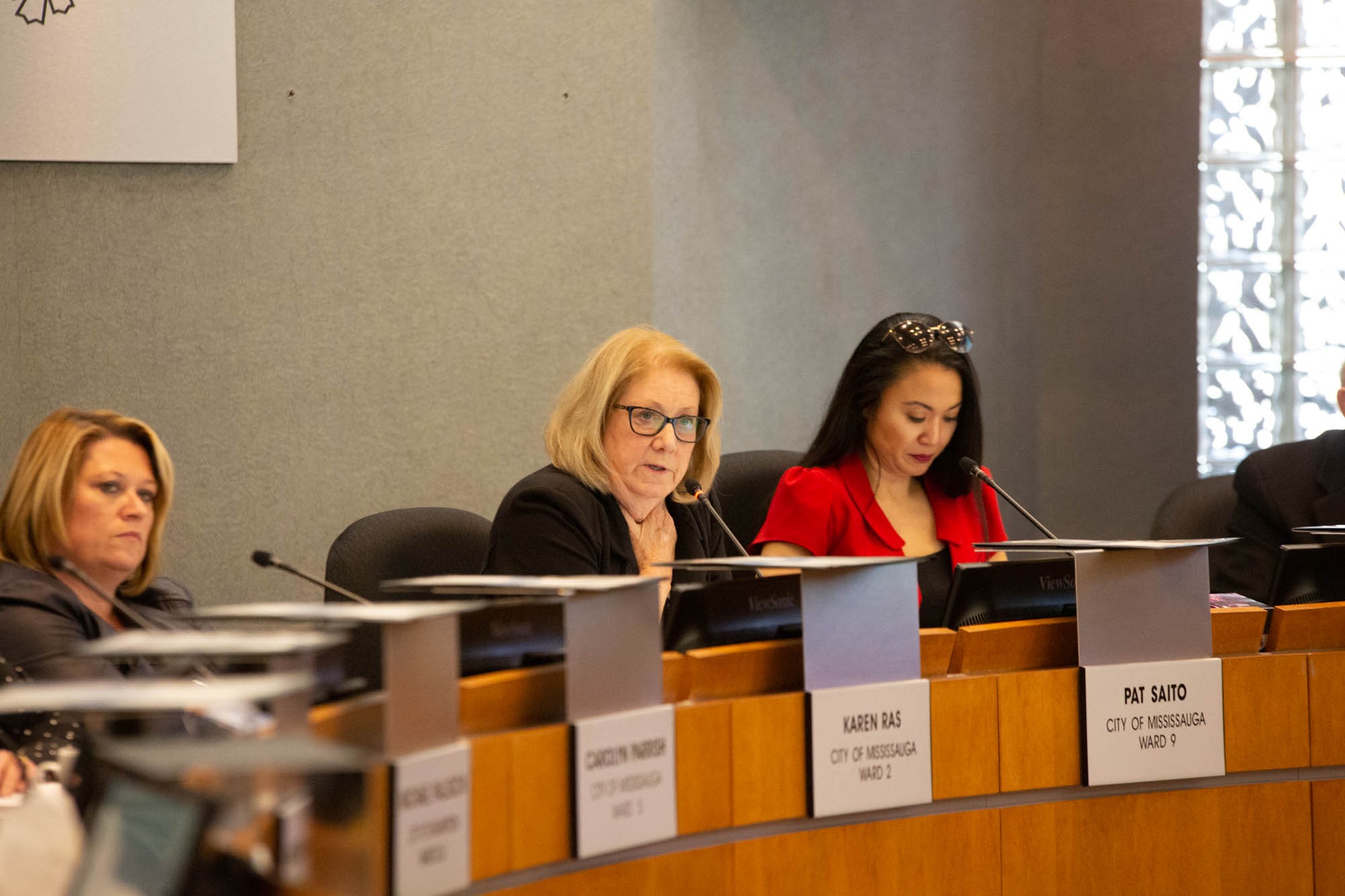 However, even Brampton’s Palleschi, whose city arguably benefits from the current policing budget and model more than Mississauga, weighed in against increasing the number of officers.

“It's kind of treating the Region of Peel like The Oprah Winfrey Show, where we're just throwing police at everything,” he said. “That being said, when the police chief comes next week, we have full confidence in his ability (to) put his money where his mouth is in terms of the innovation that he feels like he can do to make changes to policing in the region.”

The initial details of the police budget, though, are not the jurisdiction of regional council. Instead, the Police Services Board decide on the content, presenting a figure to regional council which they can approve or amend. Though there were strong hints that the police may not receive the extra officers they desire or some of the funding increases they have proposed, no resolution came on Thursday. Instead, the point will hang in the air until the next budget meeting when Chief Duraiappah appears in front of regional council to present his wishlist and perhaps hear some bad news.

Overall, the first day of budget deliberations at the Region of Peel set a clear tone. Staff were honest in their assessment that there were no corners left to cut, while Mississauga’s representatives began preparing to pare things down. With the Mississauga’s own proposed budget increase at 4.9 percent, councillors are keen to see reductions at the region to lower overall tax increases without impacting city-delivered services.

Caledon councillors, who are looking at a tax increase impact of just 0.8 percent from the region, were unsurprisingly quiet - presumably pleased with the subsidy the current budget proposes.