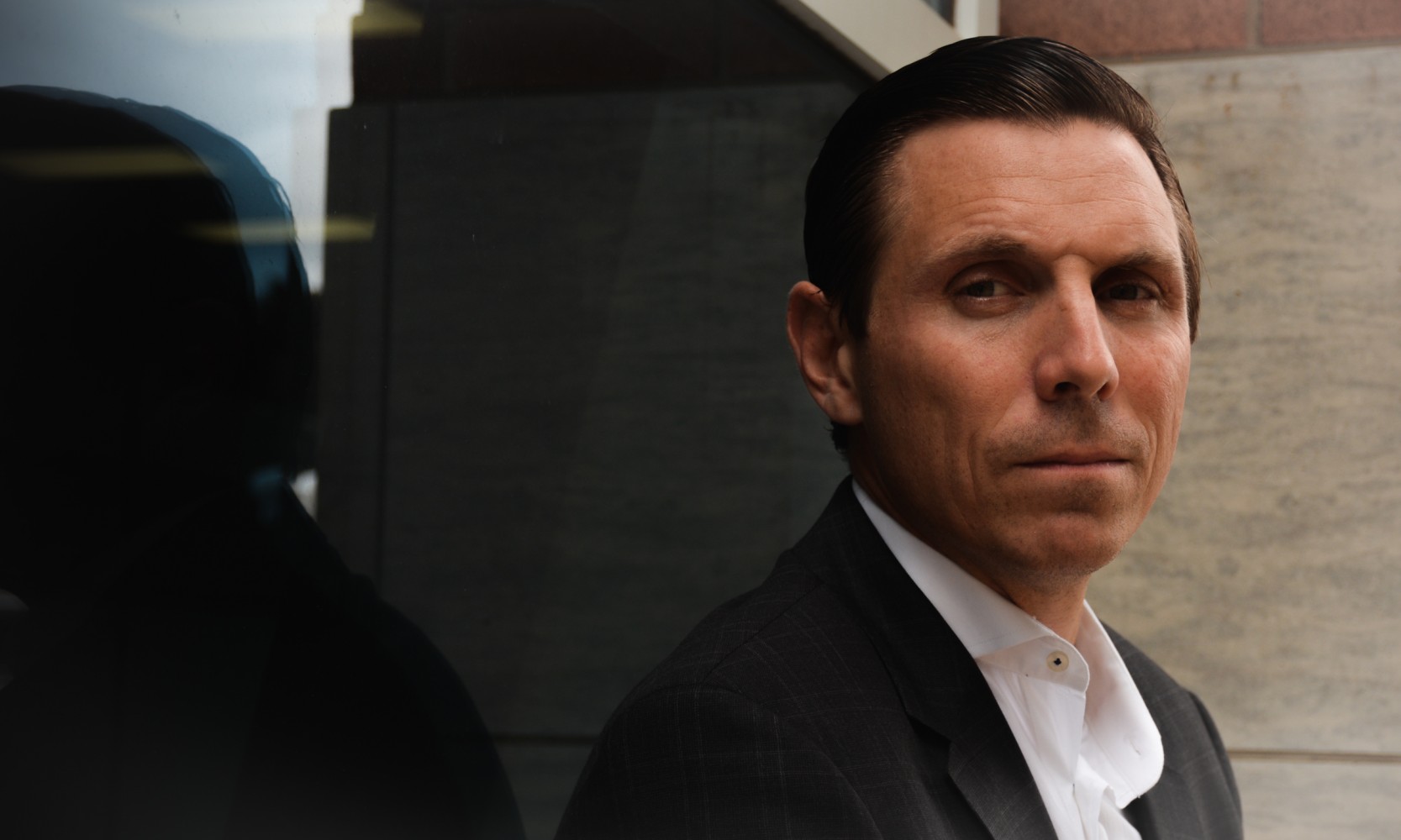 ‘Challenges can not be swept under the rug any longer’: Mayor urges PDSB to take action against anti-Black racism

In a blunt letter, Brampton Mayor Patrick Brown is joining the loud chorus of community voices urging the Peel District School Board to take action in rooting out anti-Black sentiments within the organization and calls out the board and its integrity commissioner for dismissing the concerns of parents, trustees and the community.

In the letter, sent to Stan Cameron, chair of the PDSB, Brown notes that he could no longer sit idly by while the community’s concerns continued to grow. For weeks, the PDSB has been embroiled in a controversy surrounding the remarks of Brampton Trustee William Davies, who in a private conversation this past summer, referred to McCrimmon Middle School as “McCriminal.”

McCrimmon, located in the north end of Brampton, has a large Black student body and the rest of its students are overwhelmingly non-white. Davies, the trustee, is white.

“The mark of leadership is not the problems you encounter, but in the way you resolve them. It has become increasingly concerning when longstanding members of the community come to me voicing frustration, dismay and concern for the future of the youth based on the inaction of adults in the past,” Brown writes. 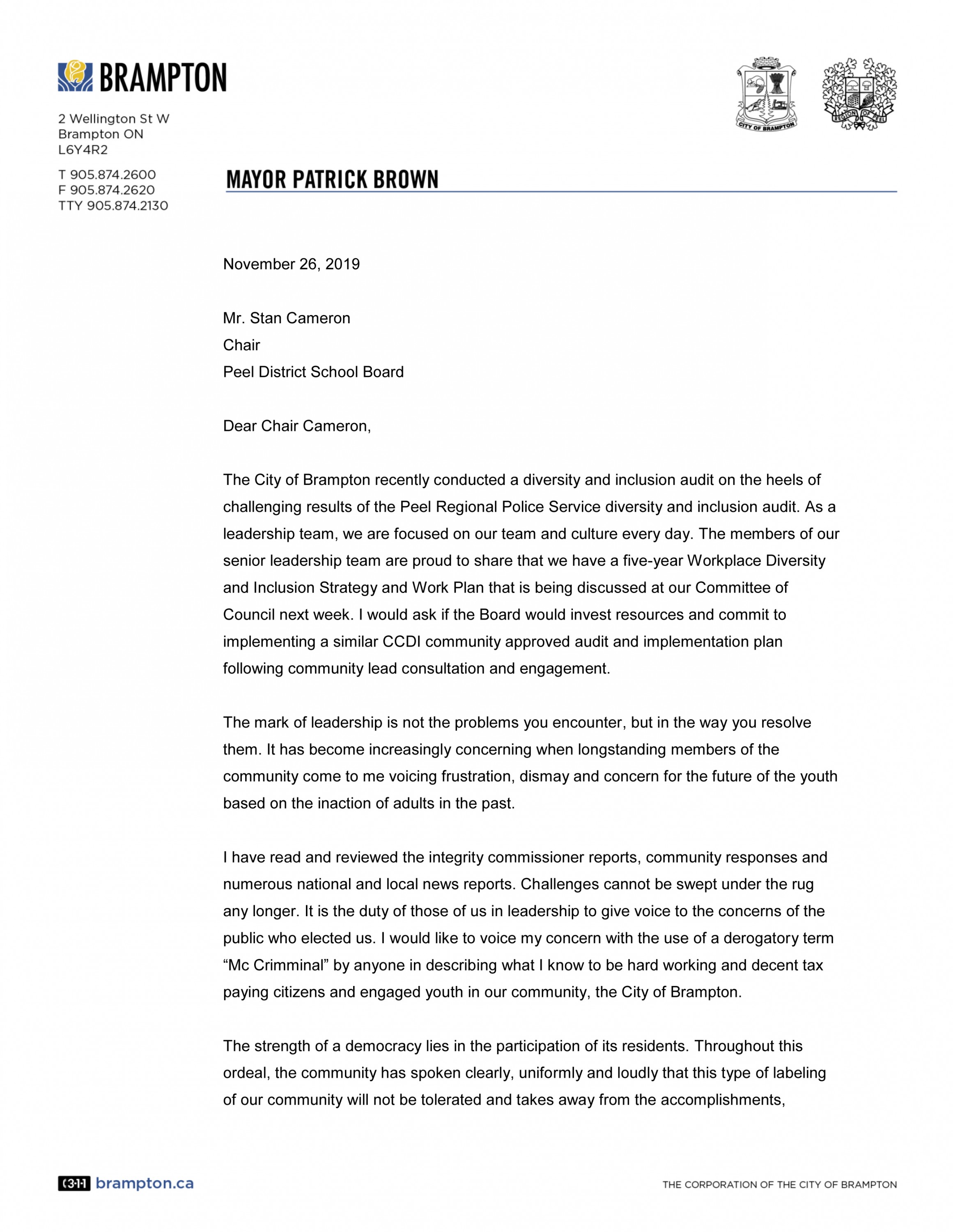 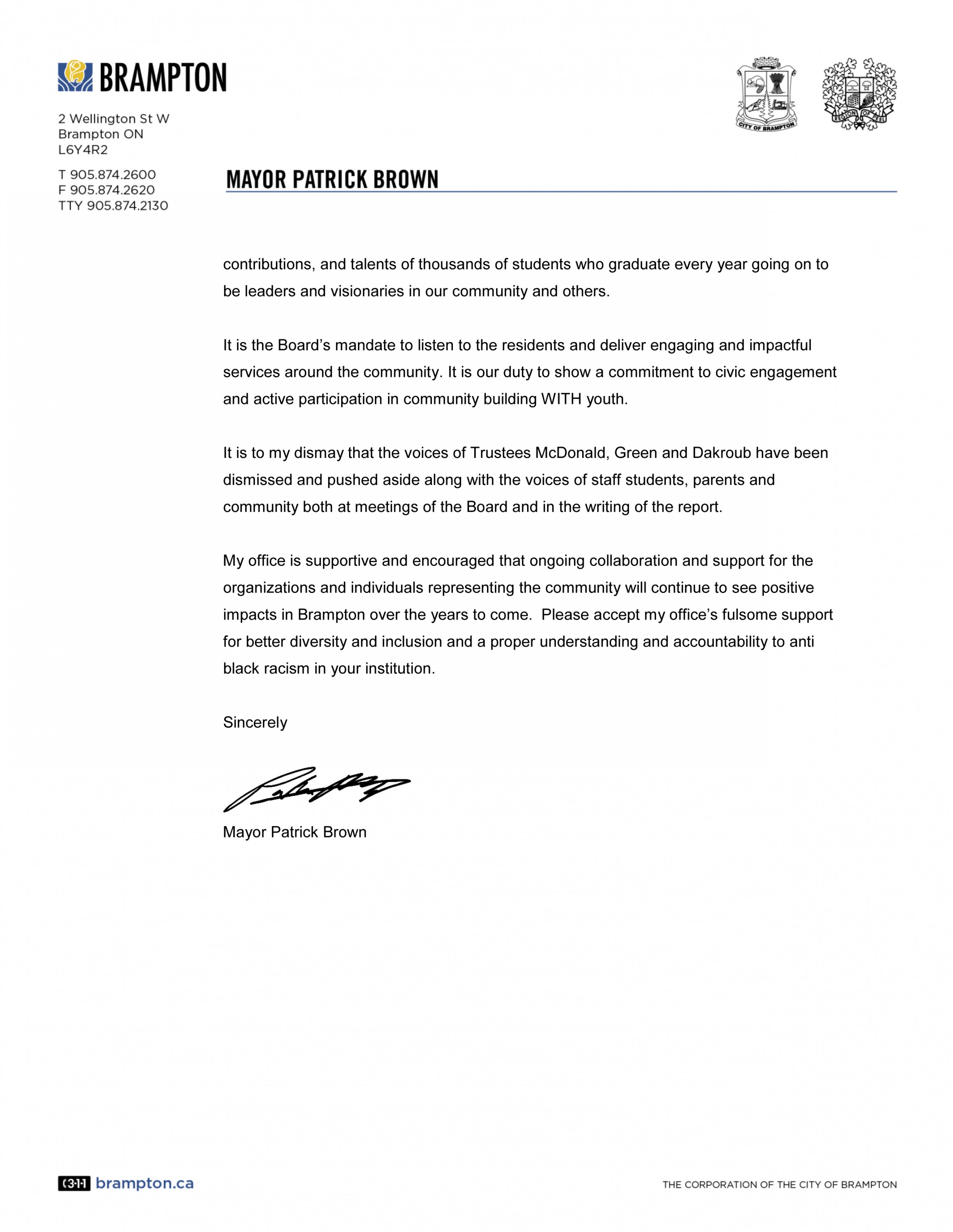 “I would like to voice my concern with the use of the derogatory term ‘McCriminal’ by anyone in describing what I know to be hard working and decent tax paying citizens and engaged youth in our community. Throughout this ordeal, the community has spoken clearly, uniformly and loudly that this type of labeling of our community will not be tolerated and takes away from the accomplishments, contributions and talent of thousands of students who graduate every year.”

Mayor Brown also took issue with the recent integrity commissioner report completed for the PDSB which concluded Davies did not violate the trustee’s code of conduct in making the remark.

“Challenges can not be swept under the rug any longer,” Brown writes.

Integrity Commissioner Sandhya Kohli’s report stated she could find no evidence to suggest that Davies had racist intent behind the use of the word “McCriminal” when describing the school which his own children had attended (now graduated and in high school).

“(Davies) has consistently engaged in ethical and mindful conduct that is befitting of a school board trustee (both racialized and non-racialized senior staff and educators) confirm that although the respondent is jovial and light-hearted by nature, they have never witnessed him engaging in distasteful or demeaning actions,” the report reads. 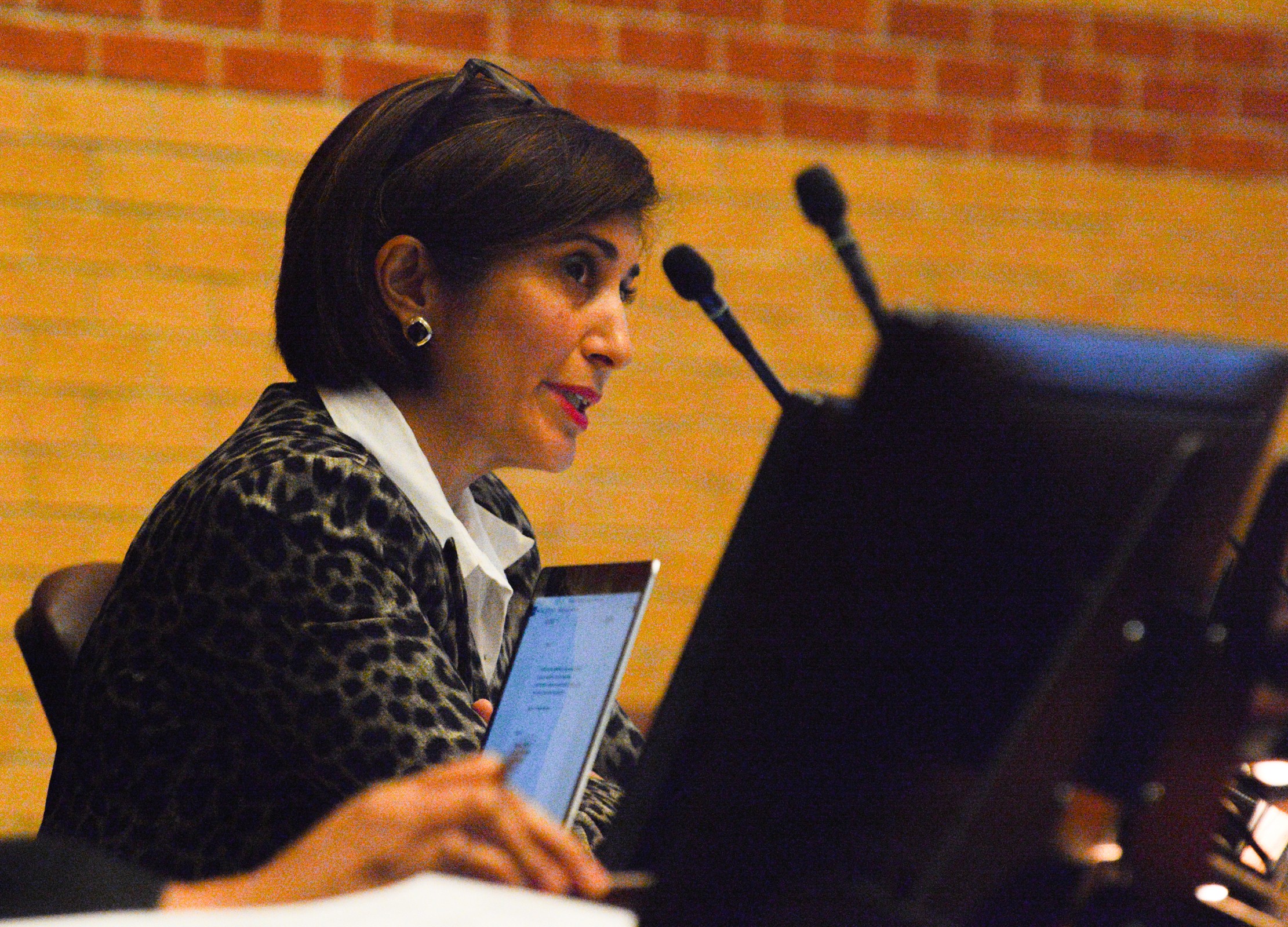 The report went before a special meeting of the PDSB board last week, where it was slammed by members of the Black community who filled the gallery inside the board’s chambers as well as several trustees who stated they could not accept the report’s conclusion.

“I wholeheartedly reject it,” said Trustee Nokha Dakroub (Mississauga - Ward 9 & 10). “I am deeply appalled by the report in its entirety.”

“It’s not funny, it’s not punny, it’s hurtful, it sends the wrong message to a board that is supposed to be advocating (against) for one, bullying, name-calling and making sure that our kids feel safe,” said Trustee Kathy McDonald referring to the ‘McCriminal’ remark.

The integrity commissioner’s report was particularly negative toward Trustee McDonald, who has been a strong voice advocating for further attention to be paid to the anti-Black racism that she says is rampant throughout the PDSB.

The report states that McDonald’s accusations of racism in Davies’ remark was a “giant and spurious leap,” and said the trustee was “disingenuous” in advocating for action against a comment she believed to be racist. 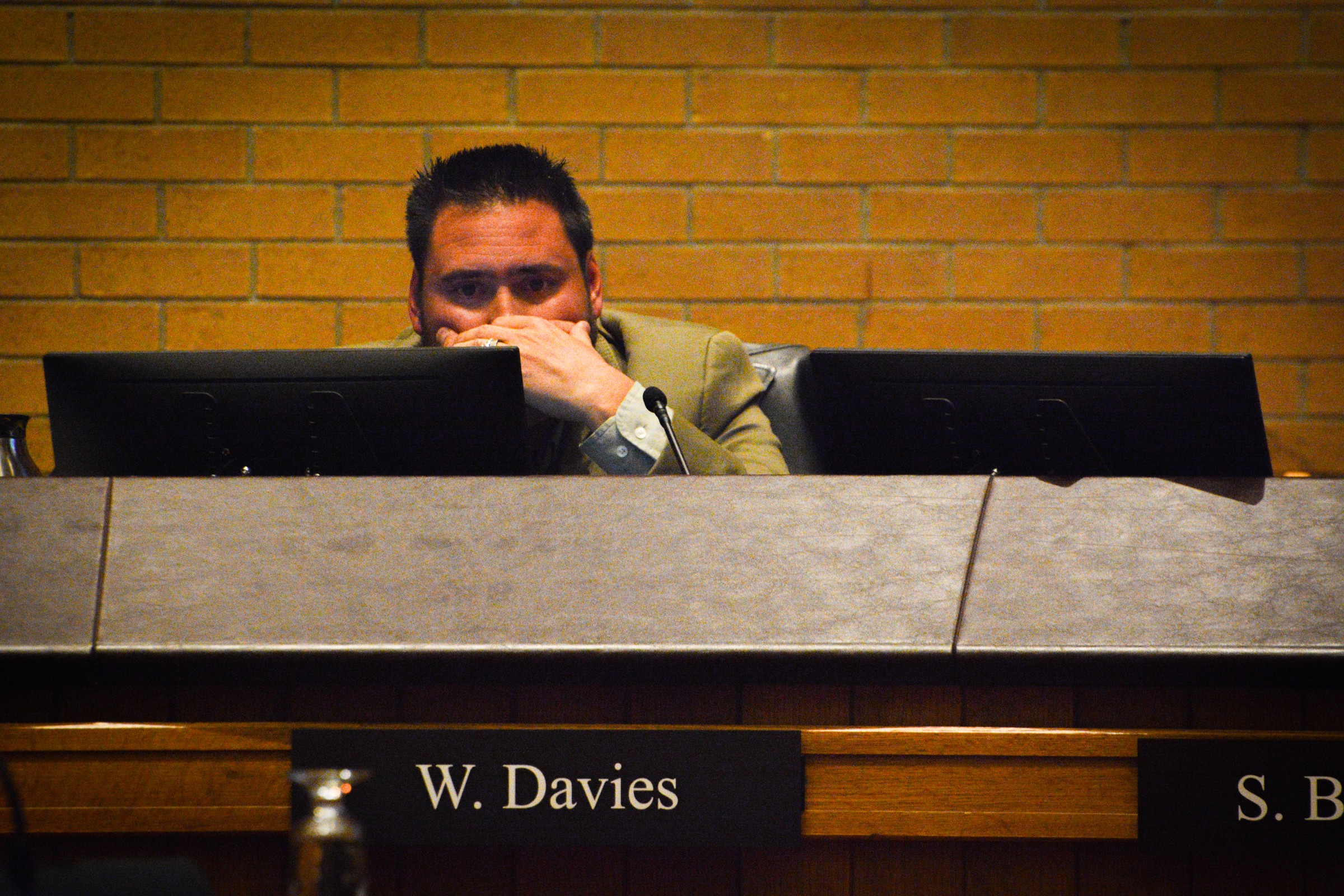 In his letter, Mayor Brown accused the board of ignoring trustees and the community.

“It is to my dismay that the voices of Trustee McDonald, Green and Dakroub have been dismissed and pushed aside along with the voices of staff, students, parents and community both at meetings of the Board and in the writing of the report.”

Brown further stressed this point in an interview with The Pointer.

“My heart goes out to them, I feel they are speaking on behalf of our communities and they’re sort of being swept under the carpet,” he said.

Yet, McDonald is not the only one raising the alarm about the existence of serious problems surrounding the board’s issues with bias and potential discrimination.

In a complaint filed to the Human Rights Tribunal of Ontario by Poleen Grewal, the board’s associate director and its head of equity and inclusion, she alleges widespread anti-Black and anti-South Asian behaviour in the board and by director of education Peter Joshua, in her human rights complaint. 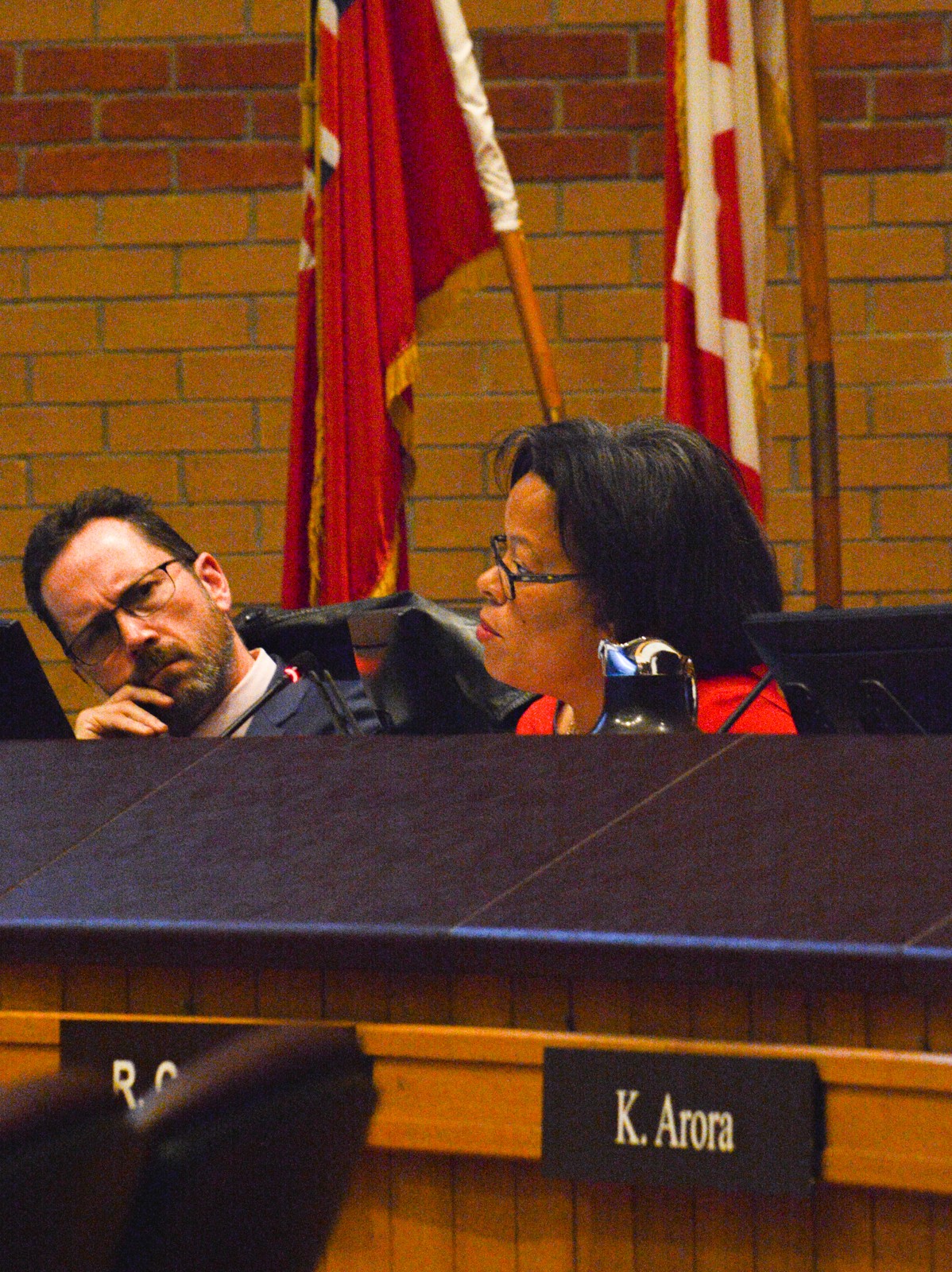 The board and Joshua have denied the damning allegations.

Amid the chaos, the province announced earlier this month they are now taking the remarkable step of intervening to find a way forward as tensions continue to mount.

“Allegations related to equity in the Peel District School Board have raised concerns, specifically related to anti-Black racism and lack of adherence to governance, leadership, and human resources practices. These concerns have been raised by families, students, the Peel District School Board Director of Education, the board of trustees, and members of the broader community,” stated education minister Stephen Lecce in announcing the review.

Speaking at Queen’s Park on Tuesday, Lecce said the two reviewers who would be tasked with probing the allegations against the PDSB are set to be named this week. A final report on the PDSB is not expected until next year.

Mayor Brown’s letter comes days after the release of a diversity and inclusion audit of Brampton city hall completed by the Canadian Centre for Diversity and Inclusion, which found the corporation of the City of Brampton, like the PDSB, does not reflect the people it serves.

The audit found that only 37 percent of the city’s staff are racialized individuals, while almost 75 percent of the Brampton population are visible minorities.

In his letter, Brown urges Cameron to have the PDSB conduct a similar audit in order to get a better grasp of the problems that exist within the board and how to solve them.

“As a leadership team we are focused on our team and culture every day,” Brown states in his letter. “Please accept my office’s fulsome support for better diversity and inclusion and a proper understanding and accountability to anti-Black racism in your institution.”

Brown says that if there is willingness in the board to work with the city on finding solutions, the city would “jump at the opportunity” to assist.

“We’re all in this together,” he says. “If you look at some of the transition that the Peel police and the City of Brampton have been undergoing, it’s so disappointing to see a disconnect in a key agency in the city.”