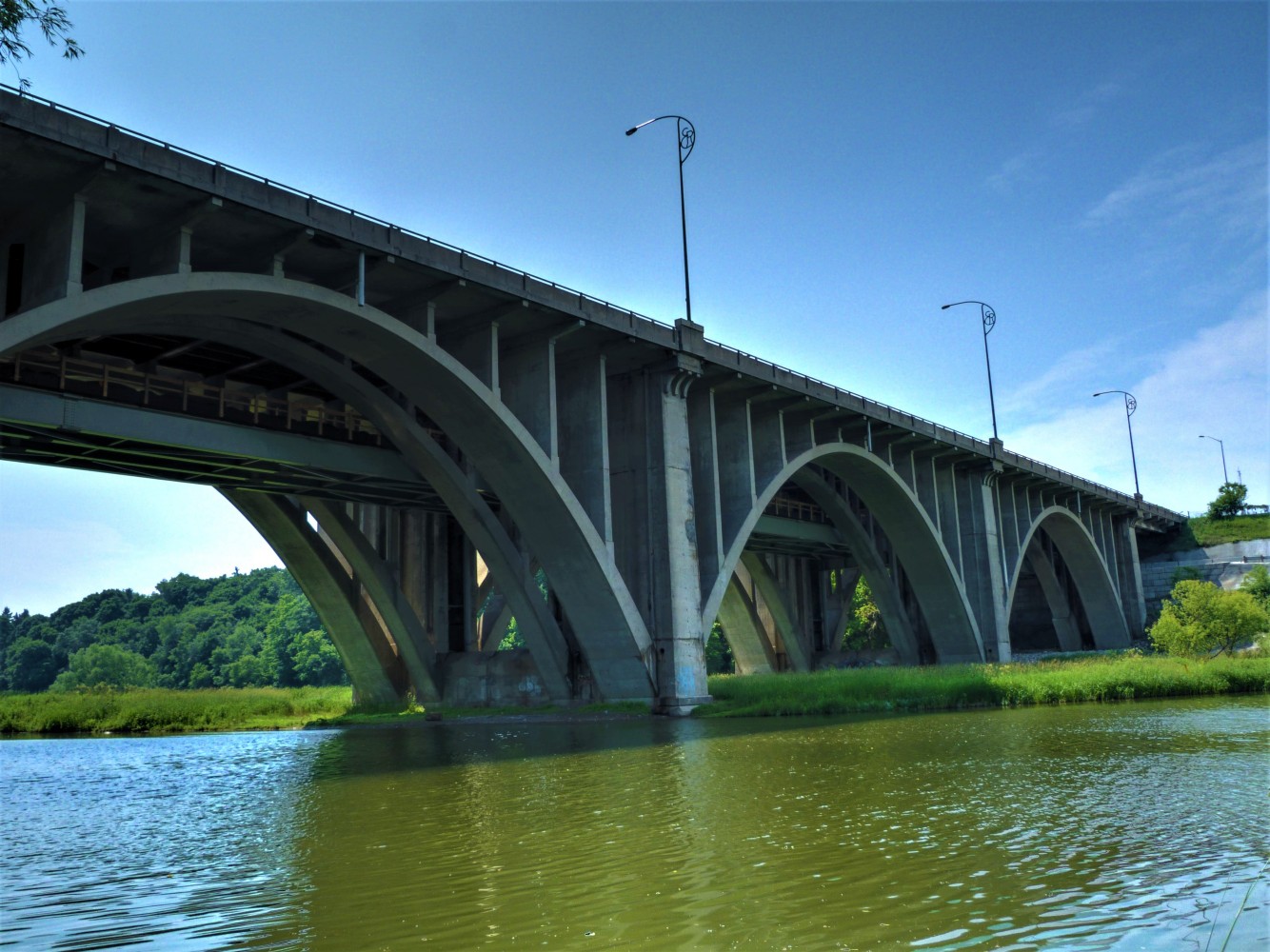 When Mississauga was first incorporated as a city in 1974, there wasn’t a lot of city to incorporate. Incredible photos show Square One Mall, now at the heart of the city, surrounded by fields and farmlands. What is now the City of Mississauga was made up of villages dotted across the vast farmscape, such as Port Credit or Streetsville.

As a result, much of Mississauga’s infrastructure is relatively new. The Ontario Heritage Trust database lists just 150 heritage properties in the city, a small number for a municipality of nearly 800,000 people. In Ontario, places such as Kingston (582), London (322) or Hamilton (466) have significantly more heritage-designated features than the province’s third largest city.

One important piece of history Mississauga does possess is the Queen Elizabeth Way (QEW) Credit River crossing. First built in 1934, it was widened in 1960, though the original structure was preserved. Indeed, in 2009 Queen’s Park recognized the bridge as one of “provincial” significance under the Heritage Act, pointing to its integration into the landscape, views from the deck and its historical structure. 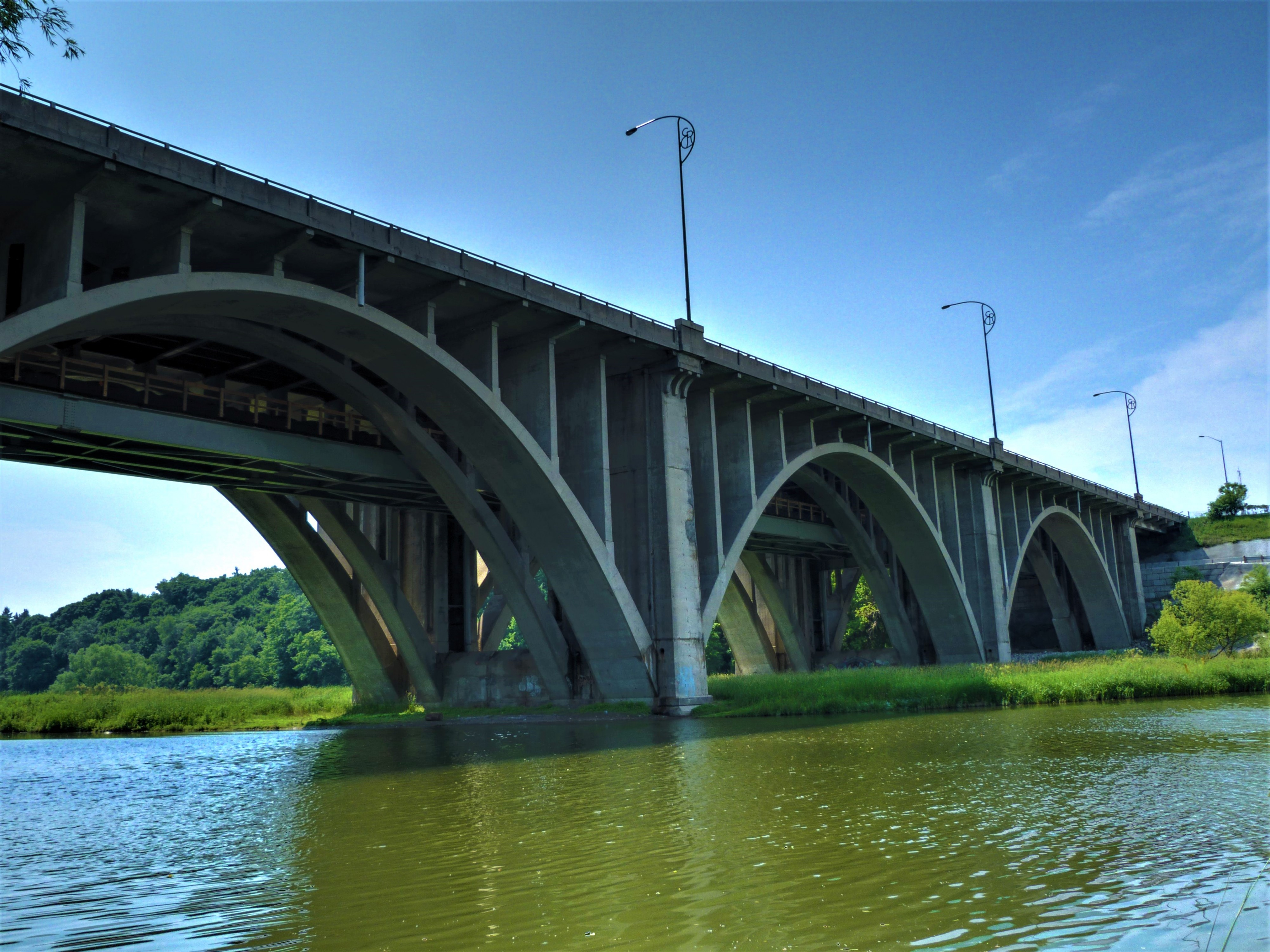 However, plans by the Progressive Conservatives are now in place to demolish the 89-year-old structure to save money, leaving Mississauga at risk of losing an iconic piece of its past (and pre-past).

Previously, plans to widen the QEW, which have been in place for years, involved the construction of a second bridge to the north of the existing one with some repairs to increase its lifespan. Traffic would then be diverted to go east on one bridge and west on the other, dramatically increasing the highway’s capacity.

However, officials with the province recently opted to explore demolishing the structure, despite no environmental assessment or other research being completed into the option. Assessments into the original plan to rehabilitate the bridge and build a second were completed in 2013, before Queen’s Park’s change of heart.

Without environmental assessment, research still needs to be carried out into several extremely broad areas. In particular, the impacts associated with demolition must be considered, along with consultation of various parties including the city, indigenous communities and the public.

For some, this news may not come as a surprise. From cutting Toronto’s number of councillors to attempting to download public health costs to municipalities and make dramatic cuts to the education system, Doug Ford’s PC government is no stranger to seemingly rash decisions in order to find savings.

Two weeks ago, the province held an open house event in Mississauga to explain their plans to the public. At the well-attended meeting, which spanned four hours, a series of information boards were laid out in a room teeming with smartly dressed engineers and staffers. Across the boards were three options for improving the QEW’s Credit River crossing, with two labelled “not preferred” in red text and one listed as “preferred”. Considering the three options available, cost appears to be the central reason for the province’s change of heart, with its desire to demolish. 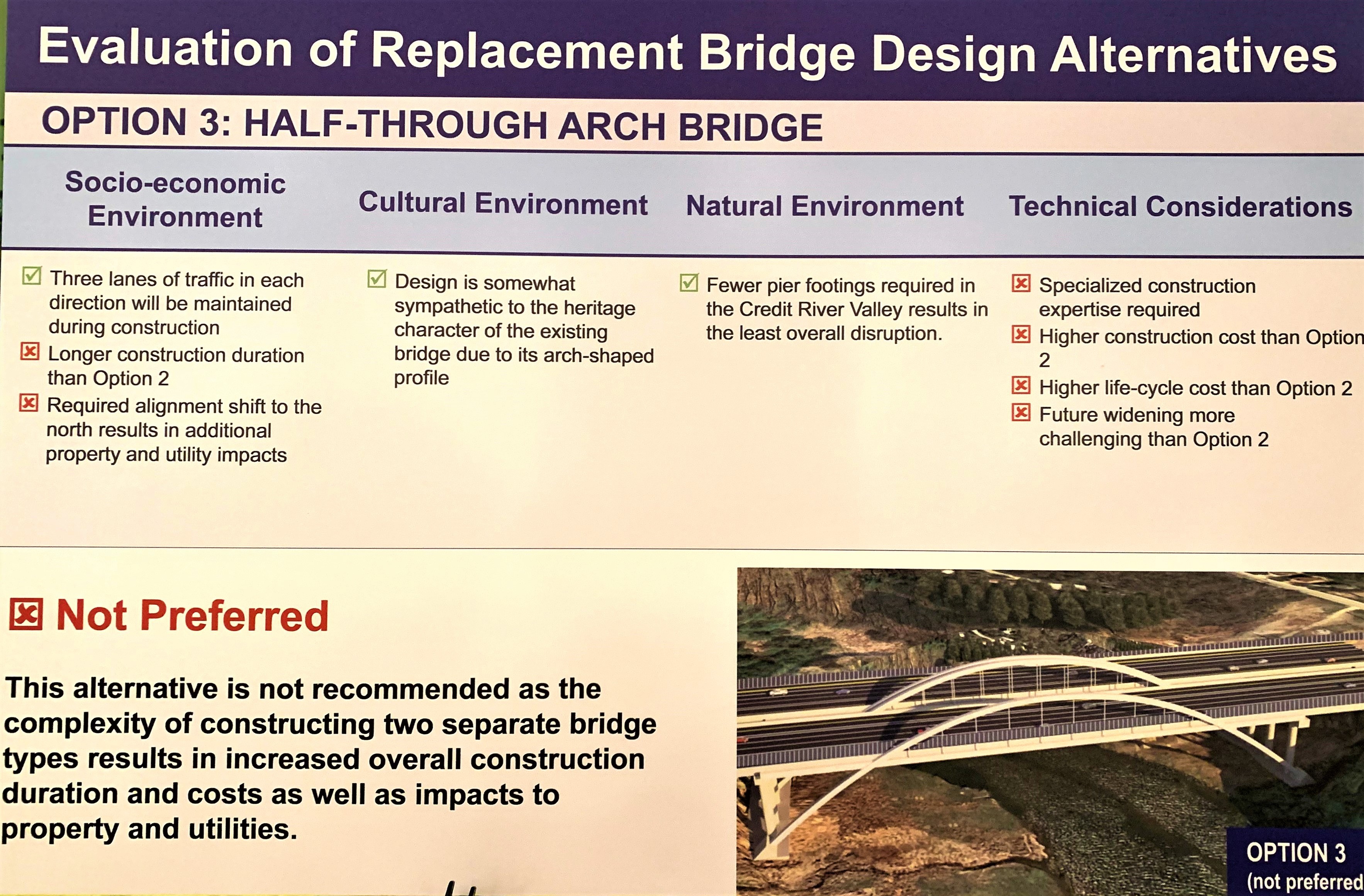 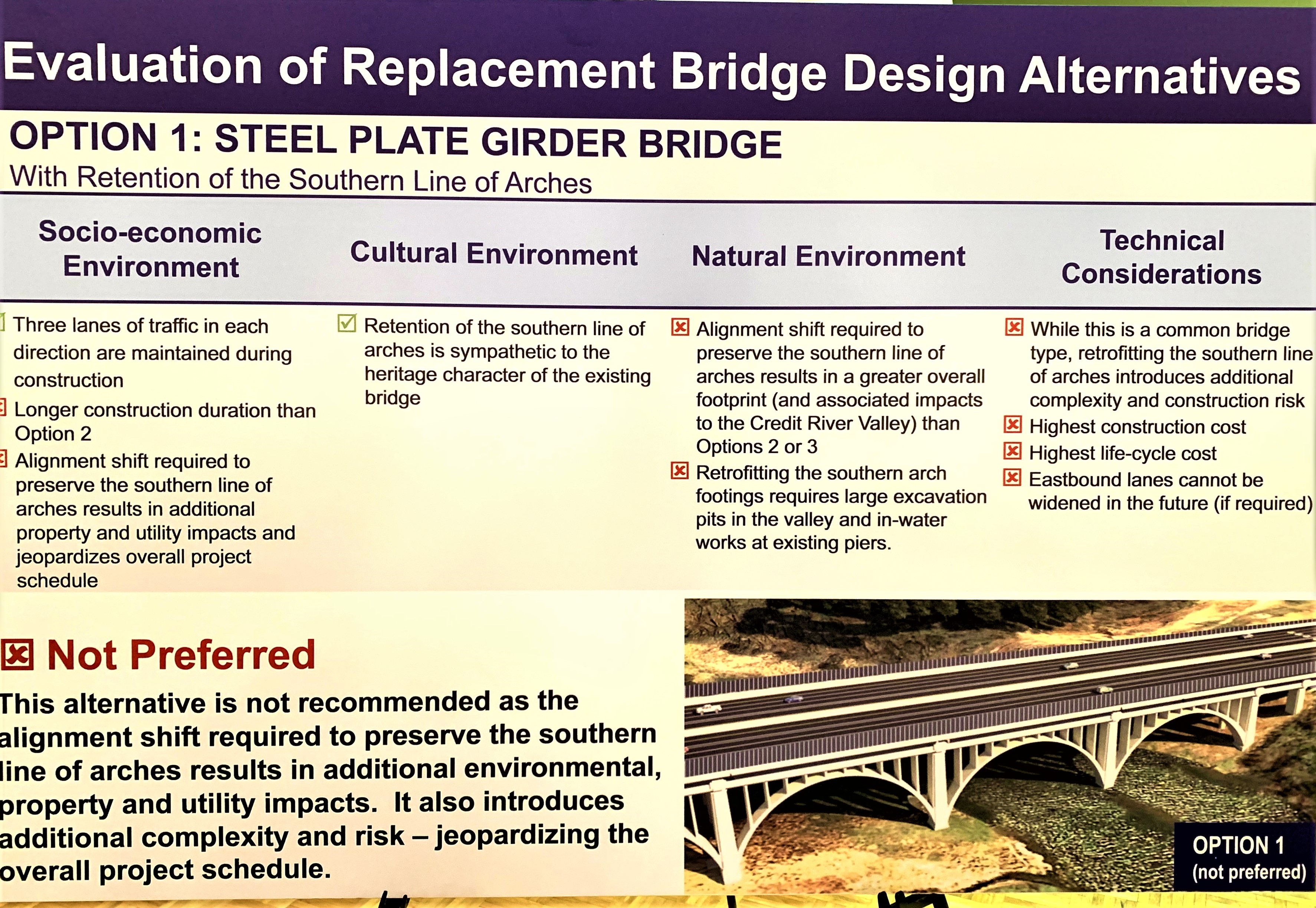 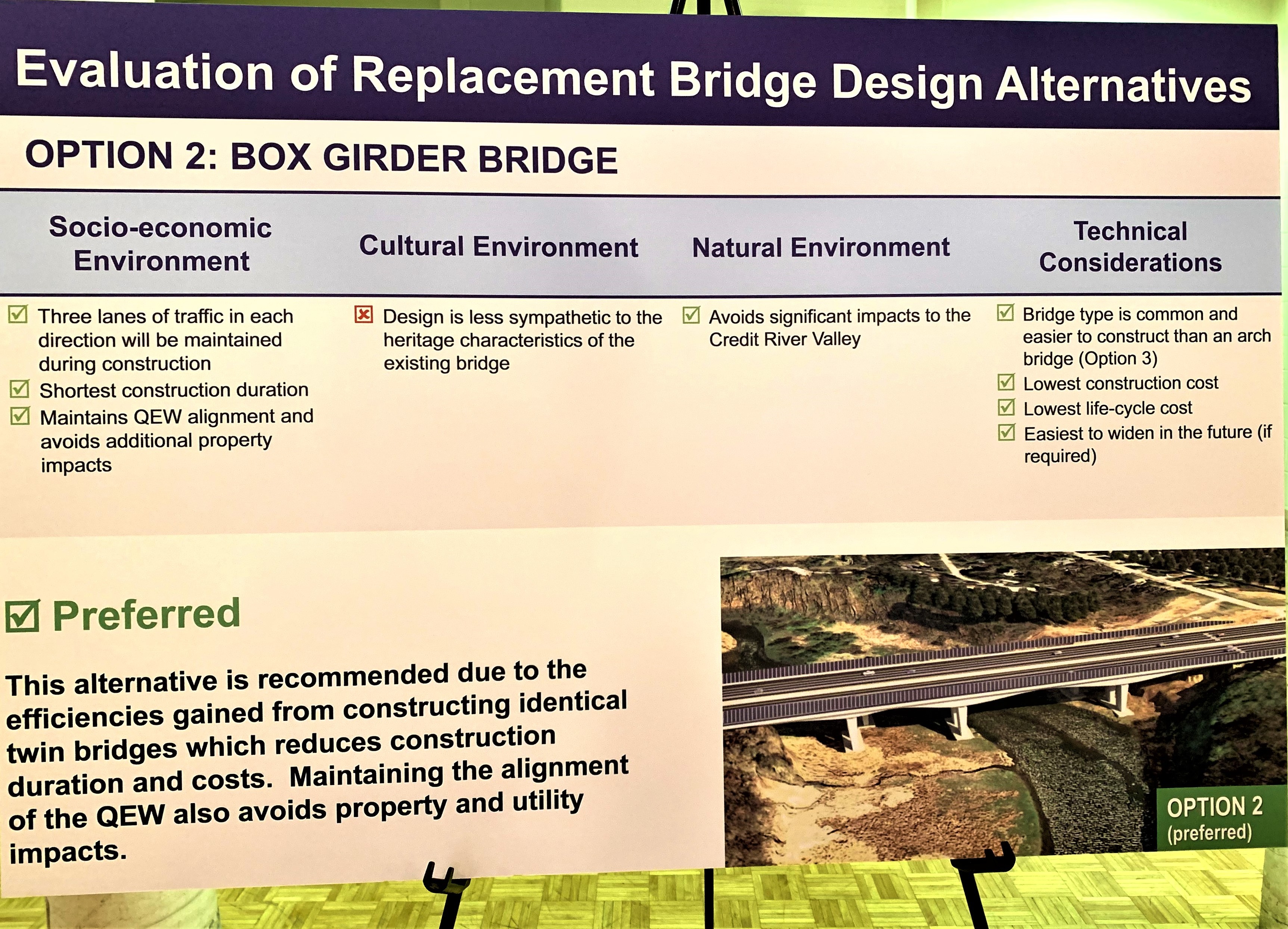 “Several factors, including cost and lifespan of the new structure, led the Province to determine that replacement rather than rehabilitation was the best choice for the QEW Credit River Bridge project,” Bob Nichols, spokesperson for the Ministry of Transportation, told The Pointer. “This new proposal to demolish the existing bridge and replace it with a new bridge also requires that the province build an additional ‘twin’ bridge to the north.  Construction on the north twin bridge is anticipated to begin in Summer/Fall 2020.”

Where the original plan to keep Mississauga’s heritage bridge intact could be expensive, demolition is simple. Building a bridge to the north and then touching up the existing crossing would require expensive options such as workers in the water beneath the bridge the province says, making replacement with a box-model significantly simpler. According to the PCs it would lead to the “shortest construction duration”, with the reason for the preference being “duration and costs.” The province does, though, admit that the design would be “less sympathetic to the heritage characteristics of the existing bridge.”

Given the plan is, essentially, to reduce the existing bridge to rubble, this may be an understatement.

“The province’s own legislation recognizes its significance,” Mississauga Heritage’s historian, Matthew Wilkinson, told The Pointer. “Their desire to demolish it contradicts their own assessment of its value. From what I understand, there isn’t a great deal of support for the removal or replacement of the bridge in Mississauga.”

“They’re choosing the cheapest option in the short term,” he added. “The plan they’ve put forward [for a box girder bridge] has no synergy. From what I’ve seen they will be replacing an architecturally significant bridge with one that is anything but… imagine if it was a heritage home. What the province is doing is asking to demolish a heritage home, not because it is rotting or not up to safety standards, but because they would like to build a bigger, cheaper house on the site. The process is being driven by money, not its own decision on how significant the architecture is.”

Some residents will doubtless side with Wilkinson in questioning the method. Plans have been in place for around six years to build a second bridge for traffic in one direction, while keeping the current bridge intact. Local councillors, including Stephen Dasko (Ward 1) and Carolyn Parrish (Ward 5) were at the event, with Dasko telling The Pointer that he believed the province’s demolition plan was simply a cost-cutting measure. 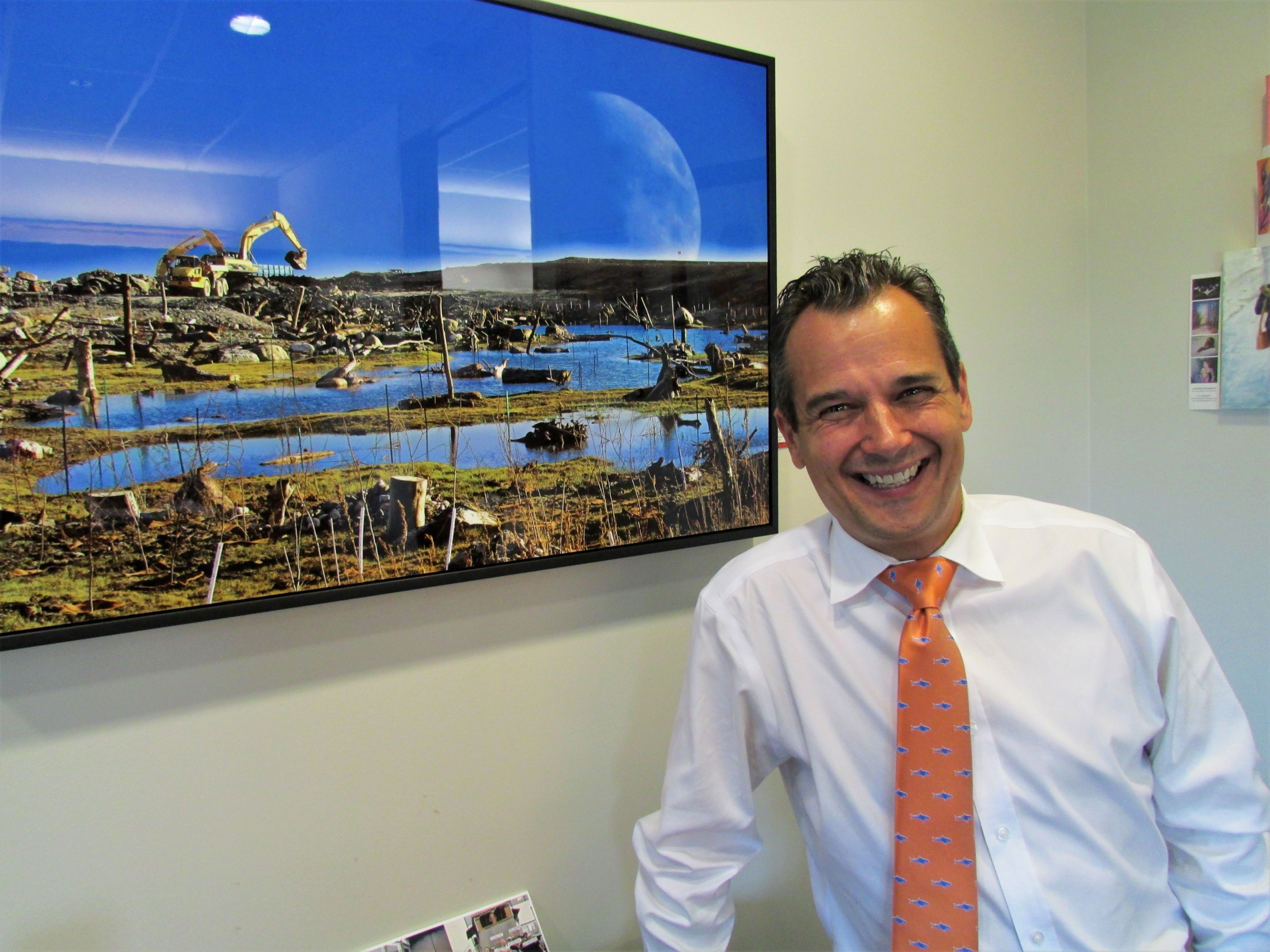 Councillors Parrish, Ron Starr, Dasko and George Carlson have all expressed opposition to the plan.

Mississauga is a city slowly, but surely attempting to embrace density. In the Lakeshore region, for example, large modern developments will soon spring up in the form of Brightwater and Lakeview Village, while Hurontario Street is also the centre of much height-based planning ahead of its transformative LRT corridor construction. These buildings will bring vital housing supply to Mississauga, while increasing density and reducing reliance on the car.

However, the new density plans will also bring a homogenous feel. Tall glassy towers from Hurontario to Lakeshore risk replicating the mistakes made in designing places such as Toronto. With height relatively new in Mississauga’s short history, many who want to preserve more character are mobilizing against the forces of unchecked growth.

The Pointer reached out to local Mississauga-Lakeshore MPP Rudy Cuzzetto for comment on the bridge, but he and his team did not respond. Meanwhile, confusion over the status of the demolition persists, with the MPP responding to a tweet from Parrish saying: “This proposal is not yet approved, and there will be a 30-day consultation period beginning next March. I’ll ensure that it’s well publicized, so everyone can contribute.”

The bridge is 40 years older than the City of Mississauga itself, offering panoramic views of the Credit River from atop a significant piece of architecture. Though the views would remain from a new bridge, the architecture would not.

The city and, ultimately, Queen’s Park will have to decide if losing one of its key pieces of heritage, recognized by the province, is worth it.