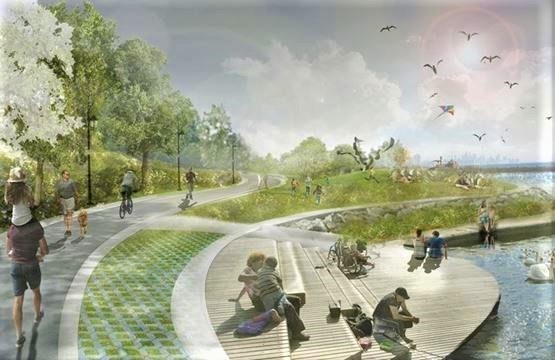 A new development plan for Mississauga’s Lakeview Village project has been approved by Mississauga’s Planning and Development Committee, creating a checkpoint in the area’s ongoing development saga. The plan resembles something of a compromise between the development consortium and local residents, though the most active and vocal community leaders are still not satisfied.

According to a report by City of Mississauga staff, a number of revisions were made by developers in their latest Lakeview Village submission. In particular, density was reduced by more than 1,000 units from the previous proposal, while the heights of some buildings were also taken down.

Locals, who told The Pointer of their “shock” at the height and density previously suggested by developers for the city’s flagship waterfront project, where the old Lakeview power plant once stood for decades, will take some comfort in this. 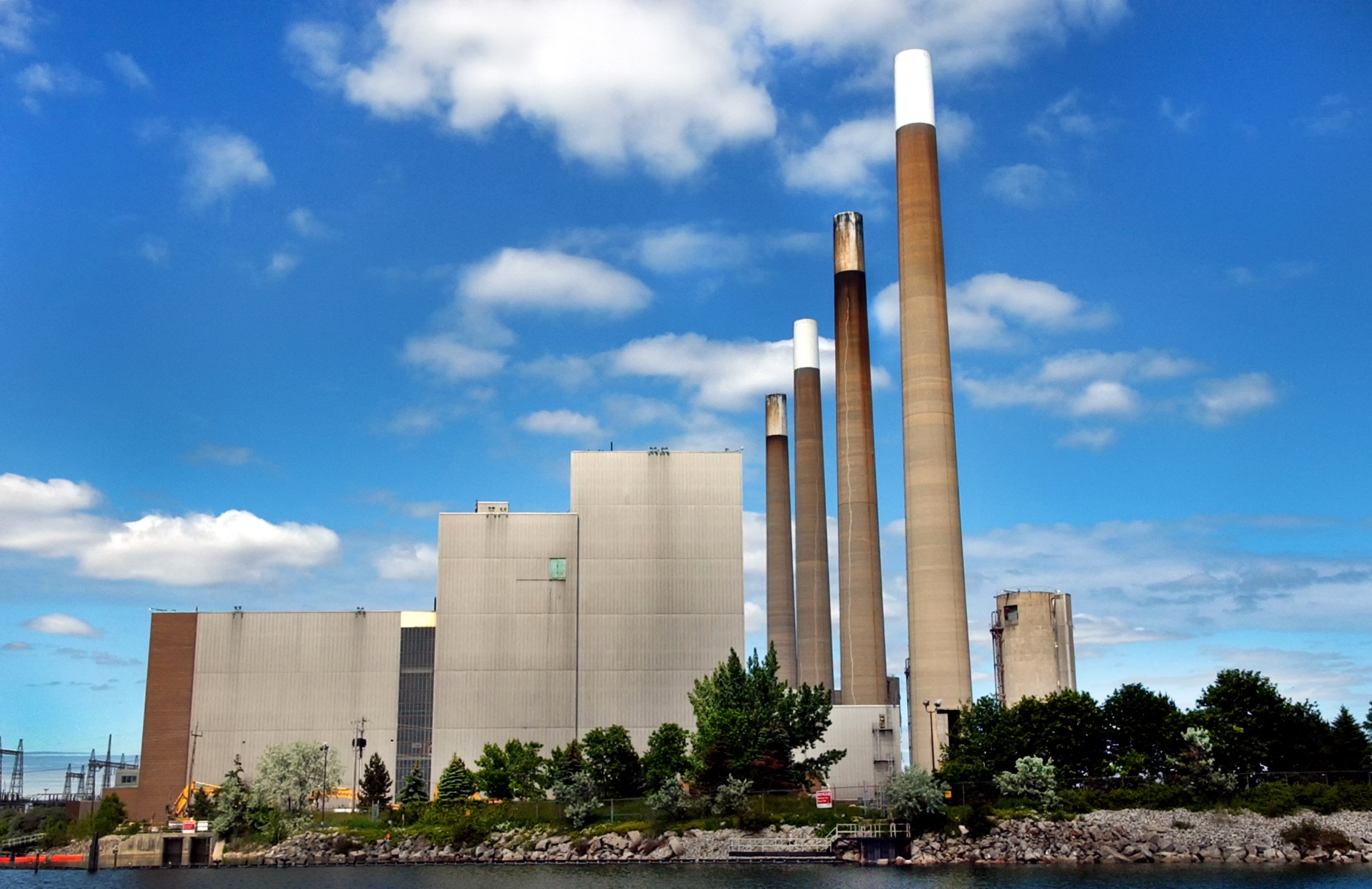 The old Lakeview power plant, at the site in southeast Mississauga where a huge new development project will be built

Some residents, though, say that the plan, which the committee approved unanimously, has not gone far enough. Known as “4.0”, the latest iteration is still substantially denser and taller than the original plans for development on Lakeview. But it has significantly lowered the heights of buildings right on the waterfront and has pushed much of the verticality back from the edge of Lake Ontario, creating better sight lines and more access to the water. The concept, now called Lakeview Village, was brought to life by former Mississauga councillor Jim Tovey, who worked with residents on a comprehensive plan. After the Lakeview Power Plant was demolished in 2006, the councillor and residents combined to reclaim the land and develop a waterfront park. As part of this project, relatively dense neighbourhoods were imagined, though height was kept far from the waterfront. The community-driven plan was eventually approved in principle by council before Tovey passed away in 2018.

After developers got on board, following the award of the project to a consortium of builders called Argo, things changed. In September, The Pointer reported on how well-prepared residents had met in the Lakeview neighbourhood to discuss density, height and to negotiate with developers on the plan they had pushed forward, which called for a row of towers to be built right on the water. The active group, under the guidance of the Lakeview Ratepayers Association, were able to express their opposition to height and other issues to council. 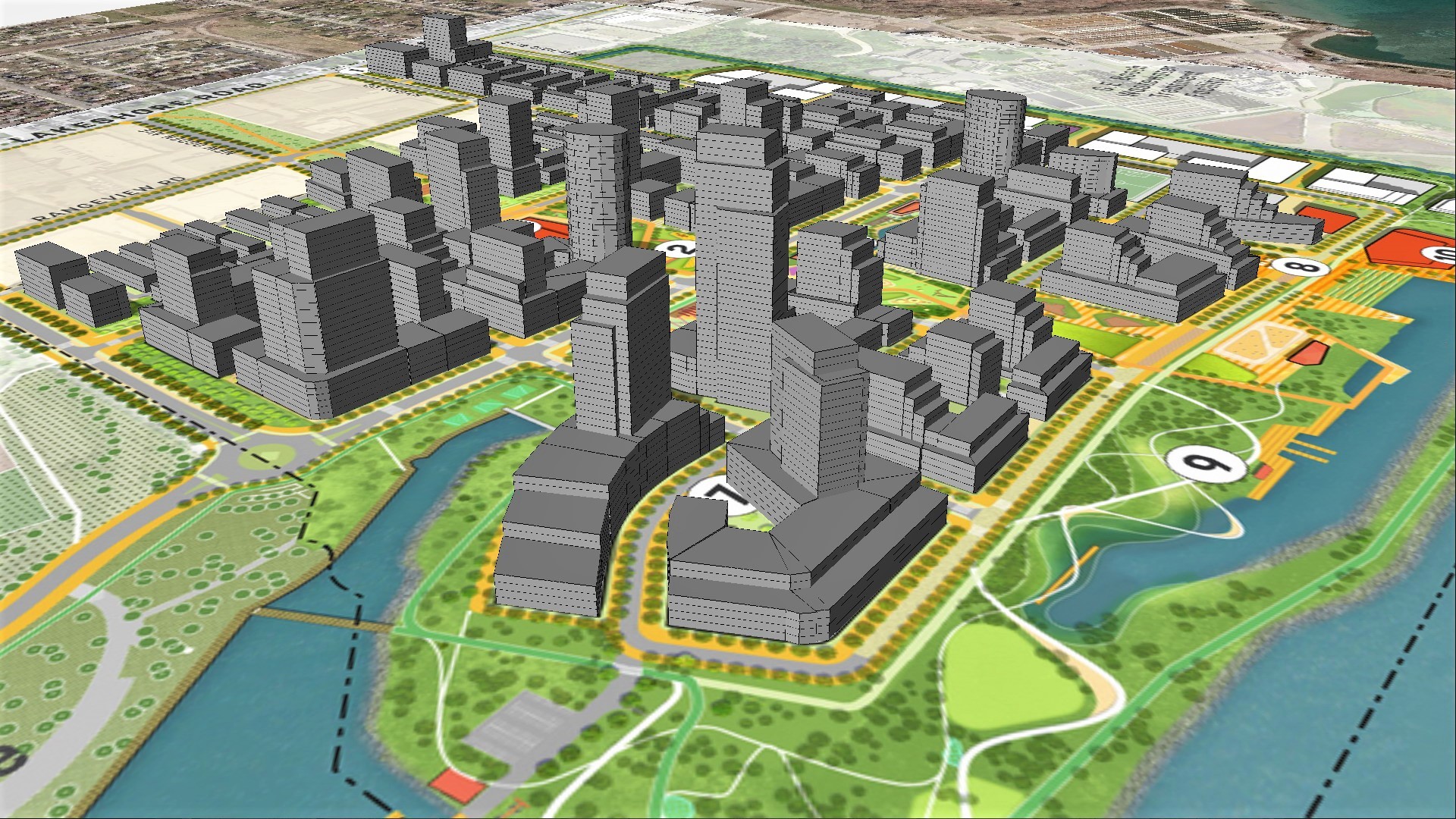 The original community-plan, above, and the plan first submitted by the developers

University of Toronto professor and landscape architect John Danahy, the urban planning brain behind the community, explained the latest master plan was an improvement, but that a few tweaks would make serious headway on multilateral project agreement. “4.0 did not lower the marina district towers [around 40 and 29 in the image] but it did lower some towers a little in the areas farther back from the waterfront where the panel felt that height was less impactful on the waterfront parks,” he said. “So in terms of the waterfront parks, the impact of 4.0 was for all intents and purposes the same as the 3.0 [the previous plan opposed by the community].”

It’s true that the density has been reduced, as has some of the height, though not all that was asked. Where the last iteration of the plan suggested 9,751 units, that number has dropped to 8,026. It’s still higher than the original vision intended (between 5,000 and 6,000), but shows some give on the part of the developers. The number of towers has also been reduced from four to three, while height has been lopped off the top of several of the tallest buildings.

To alleviate fears of height for the sake of profit not style, developers have promised that the tallest building, at 40 storeys, will only be built if justified “through architectural excellence.” This excellence will be the subject of a design contest, which will also be applied to much of the construction.

High community engagement in the project continued when it was presented to committee, with fourteen separate speakers registered to present. Perhaps to the surprise of those who have followed the project’s back-and-forth over the past few years, the vast majority of speakers were in favour. From a couple who said that the project “encompassed” all that they wanted in their first home to a local resident of 20 years, there was strong support. Two delegates from Sweden familiar with planning even stood up to praise the sustainability within the project, saying it offered Mississauga the chance to become a North American leader in environmental city planning.

One resident calling for more changes was Deborah Goss, president of the Lakeview Ratepayers Association. Goss told The Pointer that she stopped short of endorsing the plan, but accepted that much had been achieved through negotiation with the city and developers. In particular, she called for two further changes: that a 24-storey waterfront tower be redivided into two 12 storey buildings, as also suggested by Danahy, and that the city itself offer information to residents to supplement the marketing by developers.

Goss also highlighted concerns around grander city planning with issues such as the potential strain on roads and transit. “We did write to the city and say that we do feel most people aren’t liking the height,” Goss said, highlighting some concerns reflected in the Lakeview community. “The density is very worrying for people because they are very concerned about how the infrastructure is going to work around that many people on a site. It’s not against the density, it’s about how it is going to work.”

Local Councillor Stephen Dasko, who told residents he opposed height on the waterfront in September, explained that he felt a workable compromise had been reached.

“I think we have come to a decent midway point,” the Ward 1 Councillor told The Pointer. “When the consortium came out with their 9,700 number [of units during the summer], I said it was absolutely unacceptable and that we need to do better. Over a series of months and several negotiations, this was a collaborative approach for the city and its residents… I think we came up with a number that will be workable. It’s a made in Mississauga solution, the way I look at it as well.”

The Lakeview project has been here before, though. The Master Plan approved by the Planning and Development Committee is the second such plan for the project, after the developers asked for various changes last year. The next step will be for a full council at city hall to ratify the committee’s decision and move forward. That could happen later today.

Meanwhile residents will wait to see if their final demands to lower the 24-storey waterfront tower and have better communication with the community are met.