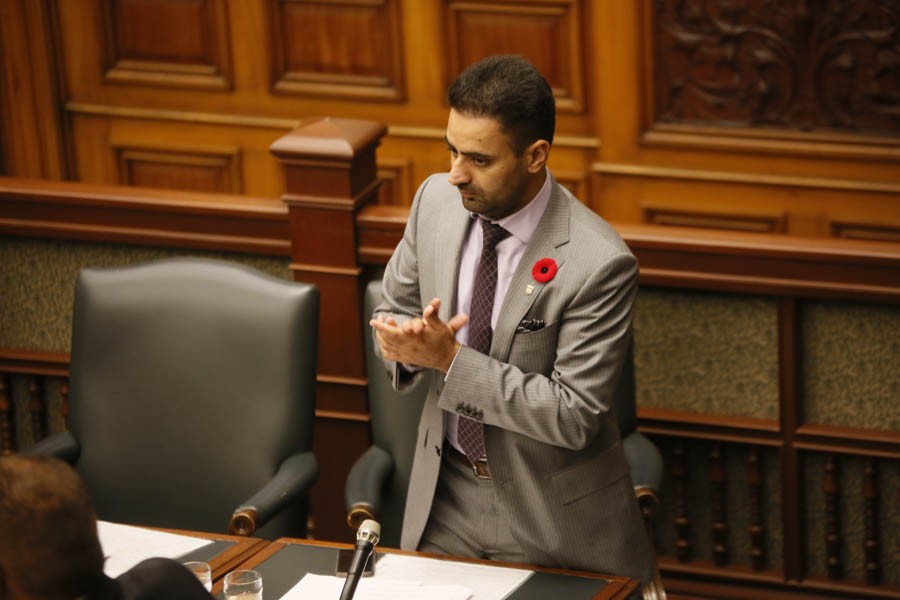 It took the officer just over 20 minutes to conclude that someone was living in the basement.

Touring the lower level of 39 Duffield Road in Brampton alongside the home’s owner, Amarjot Sandhu, who would soon become the Brampton West PC MPP, the officer detailed in written notes all the signs of illegal occupation: a finished living room, two bedrooms, a kitchen, two bathrooms and a locked door separating the space from the main floor.

Blankets and pillows covered a pair of couches, and in the middle of the room sat an air mattress with a blanket laid neatly over top. What appeared to be an empty bottle of wine stood on the counter, along with dishes in a drying rack and piled in the sink. A roasting pan was on the stove. 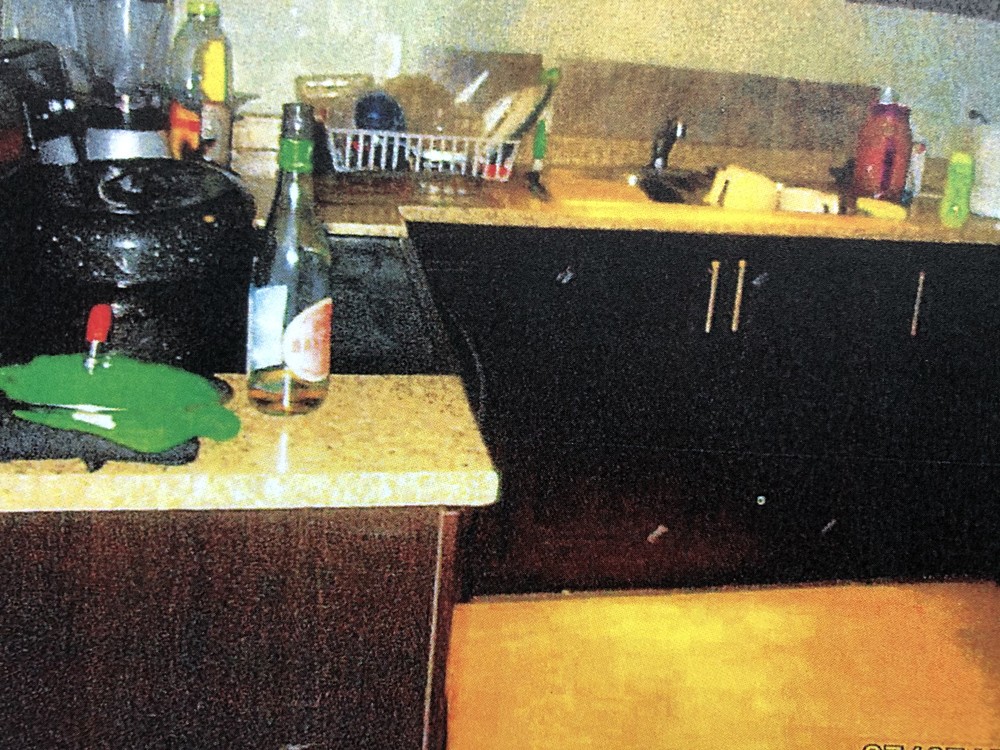 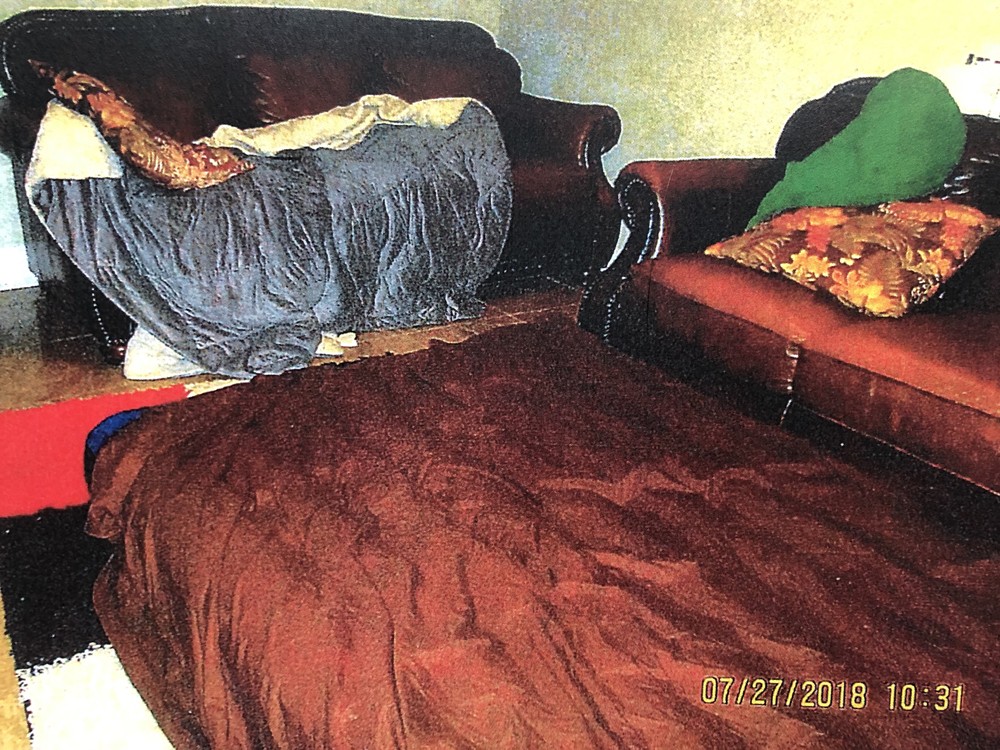 Images taken inside the basement of 39 Duffield Road, a property owned by Brampton MPP Amarjot Sandhu.

The inspection began at 10:23 a.m., and before the officer left the home at 10:57 a.m., the words “self-contained dwelling unit” were written in the notebook.

These, along with other details were revealed through a Freedom of Information request made by The Pointer and shed further light onto the scale of the growing problem of illegal secondary suites in Brampton, as well as the city’s ongoing efforts to bring some 30,000 to 50,000 of them into compliance with proper building and fire codes.

In his initial response to The Pointer, Sandhu claimed that he “immediately” worked to resolve the issues raised by the enforcement officers. However, the documents obtained since reveal this is not the whole story.

The issues for Sandhu began in May of last year. In the midst of his campaign to become a Member of Provincial Parliament, to create new laws and uphold existing ones, he was simultaneously dealing with bylaw enforcement officers from the city, knocking on the door of a property he owns at 58 Sandy Beach Road.

According to city records, on May 2, 2018, the City of Brampton received an anonymous call about a potential illegal secondary suite at the address. The caller reported the entrance to the suite was through the garage, and said he had toured the basement unit during an open house.

As the City of Brampton has begun cracking down on the ever-increasing number of illegal secondary suites, which pose severe safety risks and are a significant strain on the city’s infrastructure, the next day an enforcement officer arrived at the property for an inspection.

According to the officer’s notes, after knocking repeatedly there was no answer. Following proper procedure, the officer affixed a legal notice to the door requesting access at a future date for an inspection, and asking for the property owner to call to arrange the inspection as soon as possible. 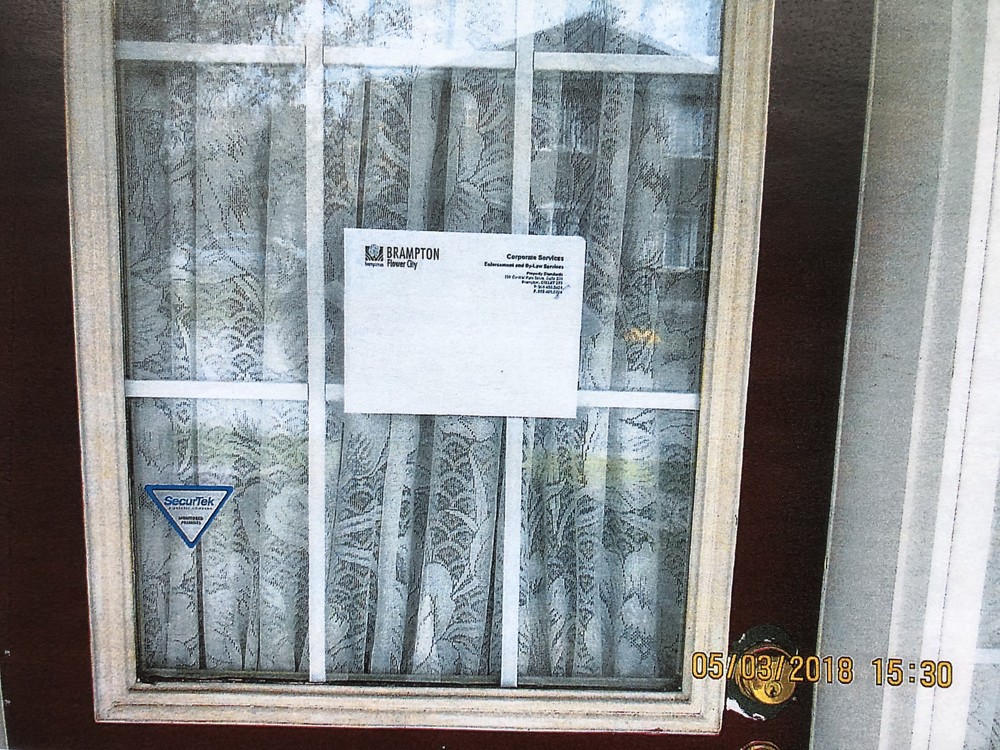 Twenty days later, the officer returned. This time, Sandhu was at the home and welcomed the bylaw officer inside. The pair entered through the garage and the officer immediately noted the locked door separating the main floor and the basement.

Entering the basement it was clear somebody was living down there. Pictures obtained through the FOI show a full fridge in the kitchen, dishes drying on the counter, a closet full of clothes, a bathroom stocked with toiletries and even family pictures affixed to the edge of the mirror in the bedroom.

According to the bylaw officer’s notes, Sandhu claimed his campaign manager lived in the unit sometimes, even though it was not legally registered. 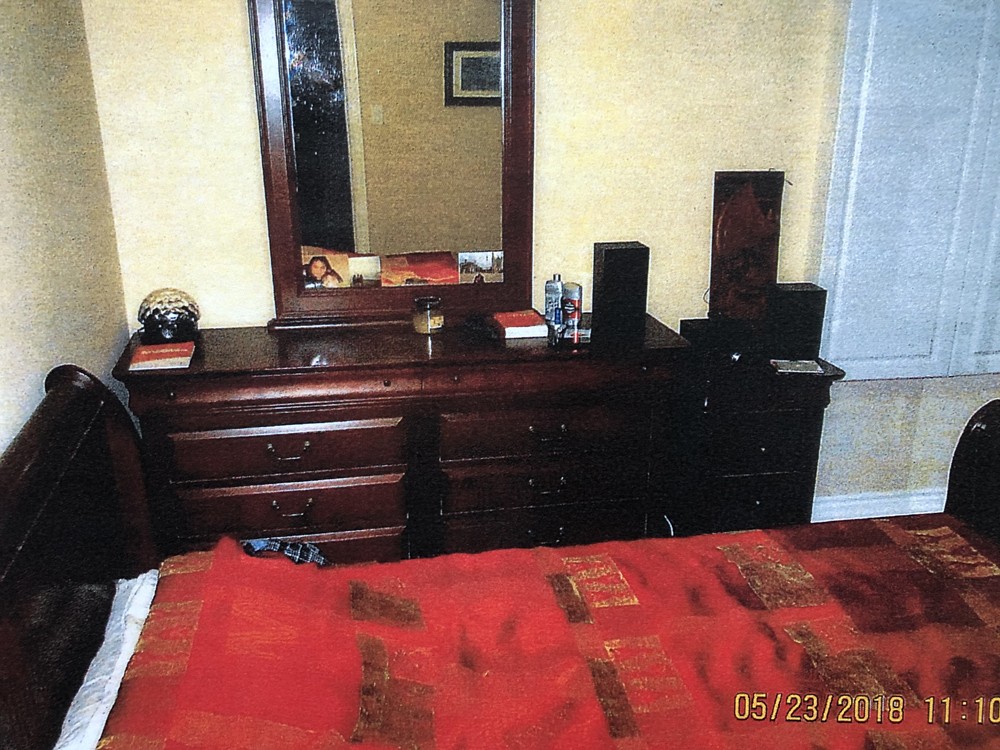 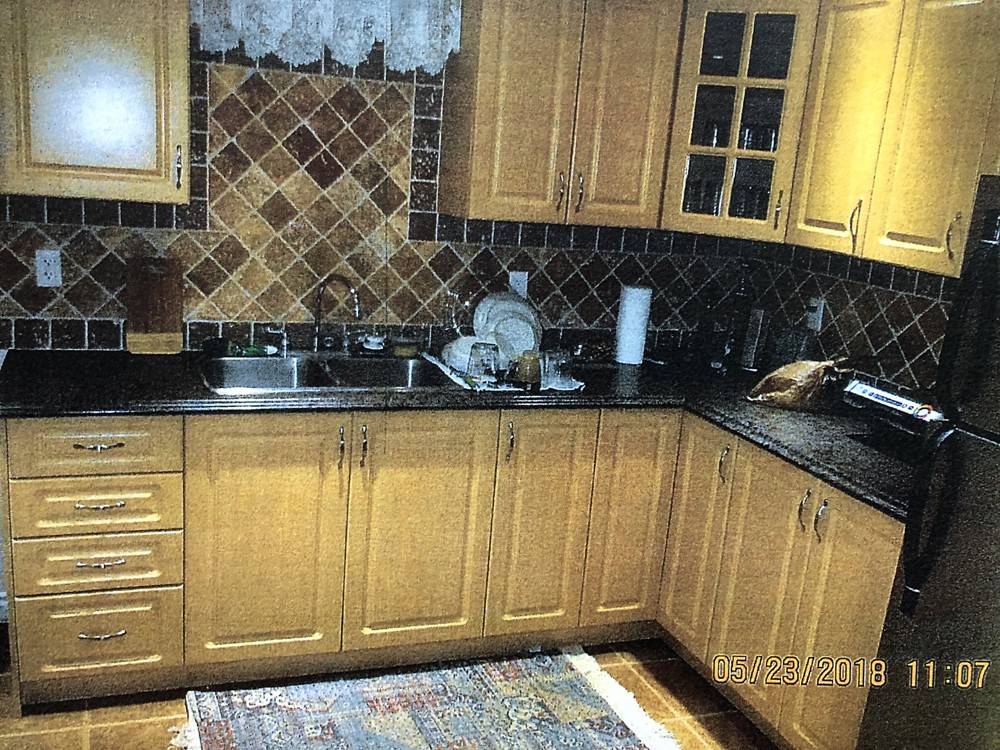 On Aug. 28, 2018 a notice of legal action was filed by the city, charging Sandhu under the planning act with “use or permit use of lands not permitted, namely, illegal second unit” and for failing to register his second unit with the city.

The complaints against him didn’t end there. Around the same time as the call about Sandhu’s property, a second home belonging to him was flagged. Before the end of May 2018, Brampton Fire Services advised the city that there was a potential illegal basement unit at 39 Duffield Road, the house that Sandhu said was his home address, according to what he had told bylaw enforcement.

The address was already familiar to the city’s building department as they were there in 2014 when a contractor was on site constructing a below-grade entrance at the back of the home without a building permit. The work stopped and the permit was eventually obtained. Sandhu did not own the home at the time. 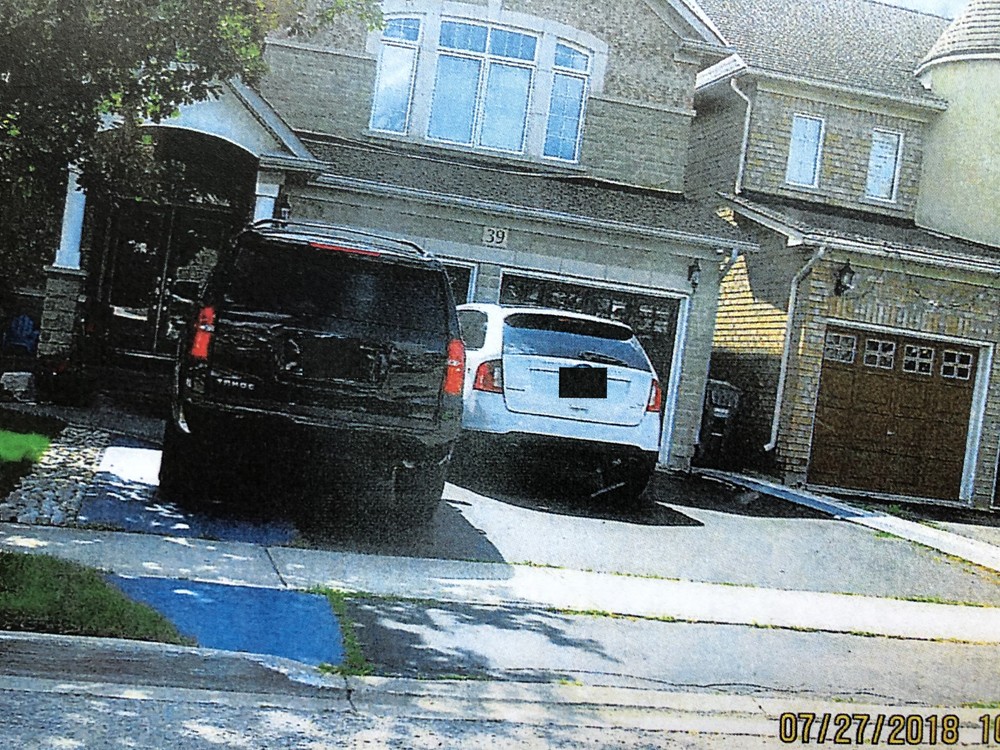 On May 30, 2018 two days after the initial complaint, a bylaw officer arrived at Sandhu’s door where his wife and co-owner of the home answered. Following the proper process, the officer left a letter advising Sandhu to contact the city within a week in order to arrange an inspection of the premises. The letter states the reason for the required inspection was due to the possibility of an unregistered unit.

When no response was received, the officer returned again on June 20, leaving the same notice with Sandhu’s wife, including a phone number and instruction to contact him within a week to arrange the inspection.

“She said she will call her husband and will call back,” the officer’s notes read.

It’s not clear by the documents what happened next, whether the officer simply returned to the home or arranged a time with Sandhu.

According to a spokesperson for Sandhu, he purchased the home in October of 2017, and he previous told The Pointer these units were already converted into secondary dwellings when he purchased the homes. However, Sandhu did not clarify whether he made any proactive attempts between when he purchased the property at 39 Duffield Road in October 2017 to when bylaw officers arrived in May 2018 to have the units legally registered with the city. It’s not clear when Sandhu purchased the second property on Sandy Beach Road, but the FOI documents contain no indication that a proactive attempt was made by Sandhu to register either property.

The pair entered through the below-grade entrance at the rear of the home. Inside the basement was a finished living room, two bedrooms, a kitchen, two bathrooms and locked door separating the space from the main floor.

From the pictures included in the documents, it’s clear the space was being lived in. 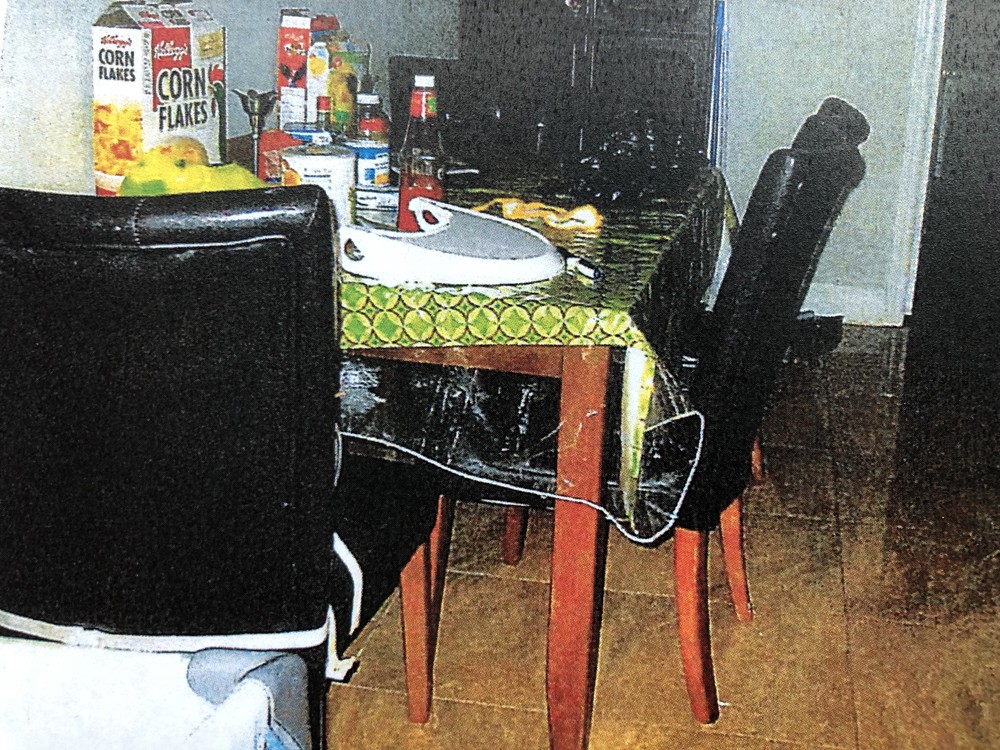 The pair of inspections led to four charges, two for each unit, against Sandhu. He was charged under the provincial planning act for committing the “offence of using or permitting the use of lands for purposes not permitted … namely a secondary suite.” He was also charged under the 2015 city bylaw brought in to regulate secondary suites with "failing to register a second unit in a two unit house."

In September of this year, more than a year after his election as a local MPP, he pleaded guilty, and was given a suspended sentence and a $5,000 fine.

Following his guilty plea, Sandhu said in an emailed statement to The Pointer that the situation had been blown out of proportion. “The properties were already converted into secondary suites before I owned them,” he said.  “A few inconsistencies [were] brought to my notice by the municipal authority after I bought the residential units, including its usage. After this, I immediately acted as advised by the municipal authorities to secure the compliance for such residential units,” Sandhu said in his previous statement to The Pointer. “After waiting for over six months, I have already been able to receive the compliance according to the City bylaws for 58 Sandy Beach Road in January 2019 and awaiting the permit for the secondary unit for 39 Duffield Road, as it has already passed the necessary inspections.”

However, according to city records, as of Sept. 30, 2019, Sandhu had received the proper licensing for 39 Duffield Road, and it now appears on the city’s registered list of secondary dwellings. Sandhu’s property at 58 Sandy Beach Road has yet to be added to the city’s list.

The two units registered by Sandhu are part of a significant rise in the number of secondary dwellings registered with the city in 2019. The city’s planning committee also approved a move to make registration cheaper, slashing the fees that had been as high as $1,200 to $200.

According to city numbers, they have seen a 770 percent increase in registration over the last year, bringing the total of legal second units in the city to 4,431 as of early November.

How many illegal units there really are in the city is impossible to know, since they tend to escape oversight and attempts to document them. Since the city introduced new regulations for registration in 2015, the rate has sped up significantly. Since the change four years ago, a total of 1,950 have been registered, with the biggest jumps in 2018 and 2019. So far this year, 1,020 have been registered.

The city has also been turning up the heat on those choosing not to register their units proactively. Since January of 2018, 4,625 charges have been laid against residents operating these suites illegally.

“We want to gain compliance from the community, and when we don’t gain compliance from the community through education, we want to do it through enforcement,” Paul Morrison, the city’s head of bylaw enforcement, told council earlier this year. “We are making headway, and through those numbers you can see that we’re being effective. More people are registering, more people are making their places safer.” 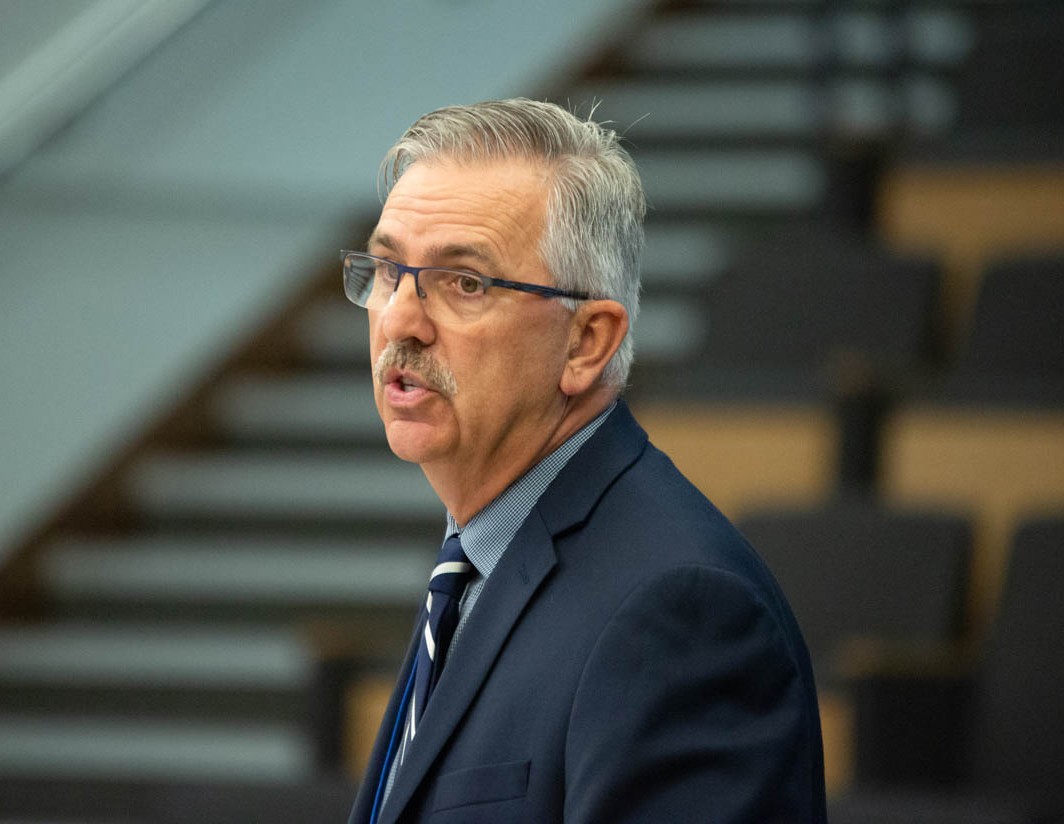 As was the case for Sandhu’s property at 39 Duffield Road, it was the fire department that brought the potential for an illegal unit to the attention of the city’s bylaw department. This is quite common as these units also pose a significant risk for firefighters as they don’t know how the home is designed, or how many people are living there. In March of this year a man was killed in a house fire in Brampton. The man lived in an illegal secondary suite.

In an effort to ensure the safety of people who live in second units, enforcement officers have fined homeowners some $1.8 million for non-compliance between 2016 and June of this year. The numbers also spiked dramatically in 2018 jumping from $71,149 the previous year to $748,850. The city had gathered a total of $910,130 in fines by June 30 of this year, meaning it’s on pace to far exceed last year’s total.