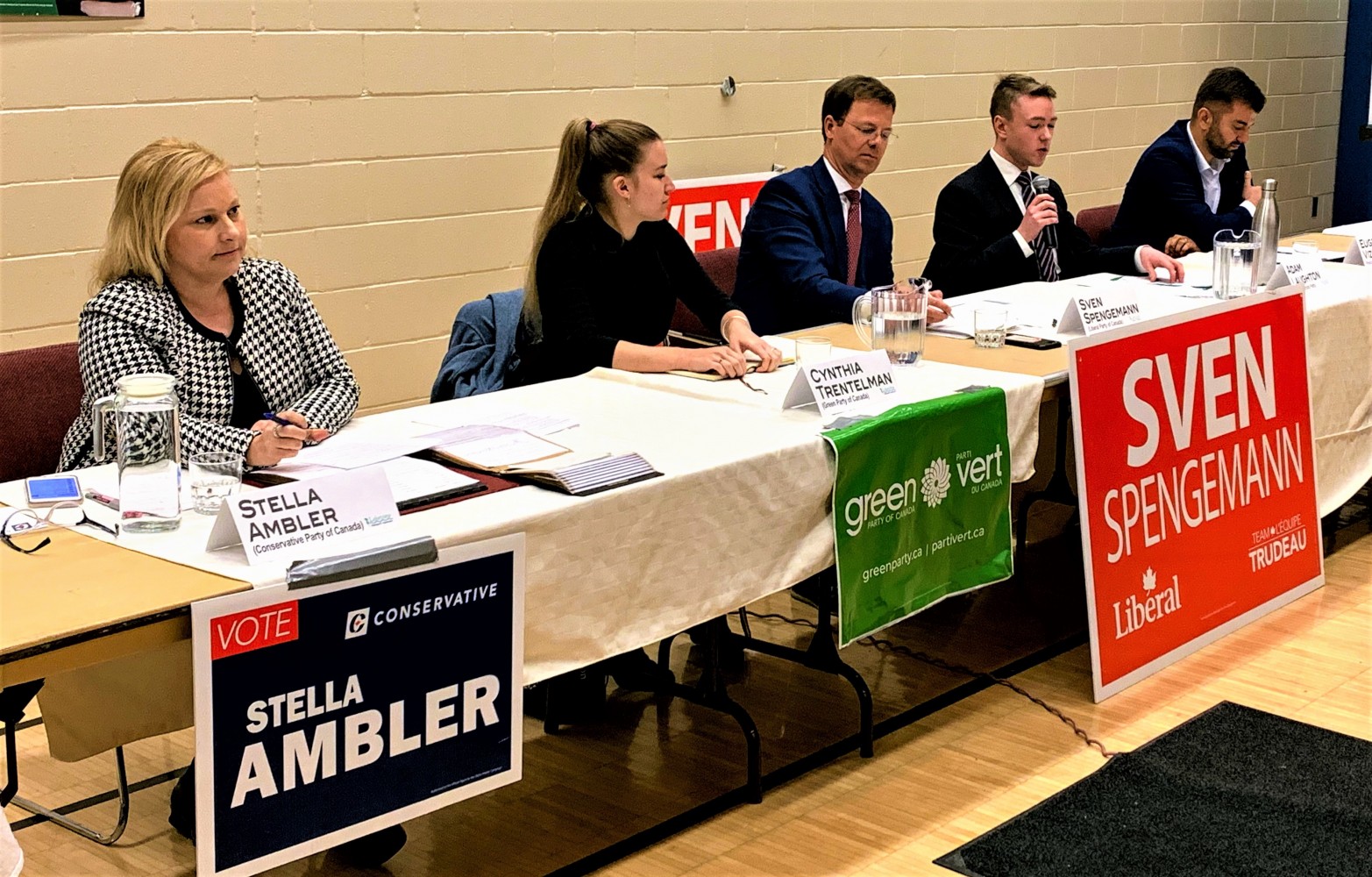 The residents of Mississauga—Lakeshore are politically engaged. Where the City of Mississauga was forced to cancel its own Mississauga Matters debate in September due to a lack of available candidates, this riding has already held three well-attended events of its own. 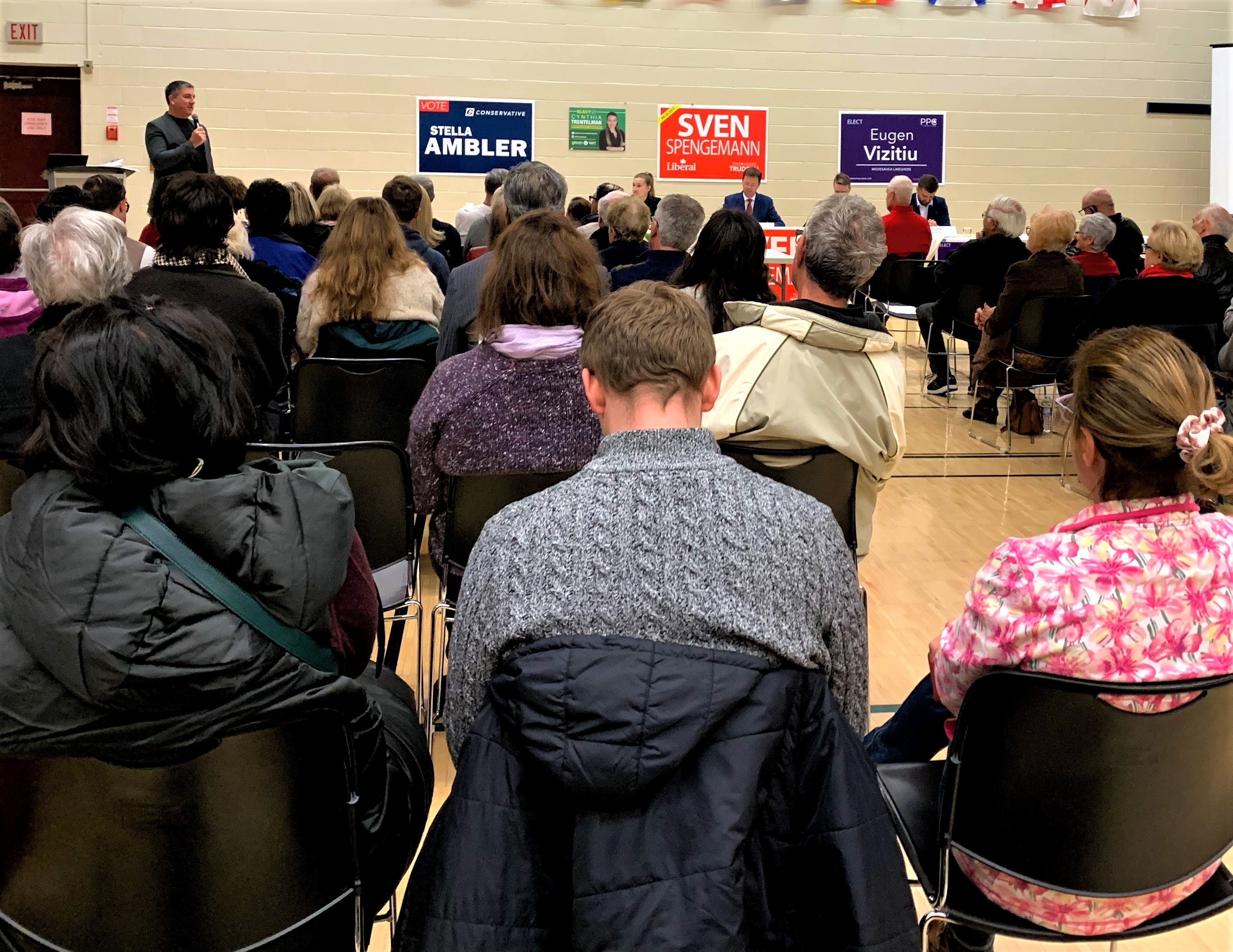 “Oh they have to come. They know they’re politically dead-in-the-water if the don’t show up,” local resident Catherine Soplet told The Pointer.

With engagement high, a turnout of 68.99 percent in 2015, the race last time around was tight. In 2015, incumbent Stella Ambler, the Conservative candidate again this year, won 24,435 votes, losing to Liberal Sven Spengemann by just 3,844 votes.

With Ambler and Spengemann repeating the same race again four years later, and polls showing it couldn't be tighter, again, politically engaged Lakeshore looks set to be one of the closest races in the region. At the debates (organized by residents) Spengemann and Ambler have faced off, alongside Green candidate Cynthia Trentelman, NDP hopeful Adam Laughton and the PPC’s Eugen Vizitiu. 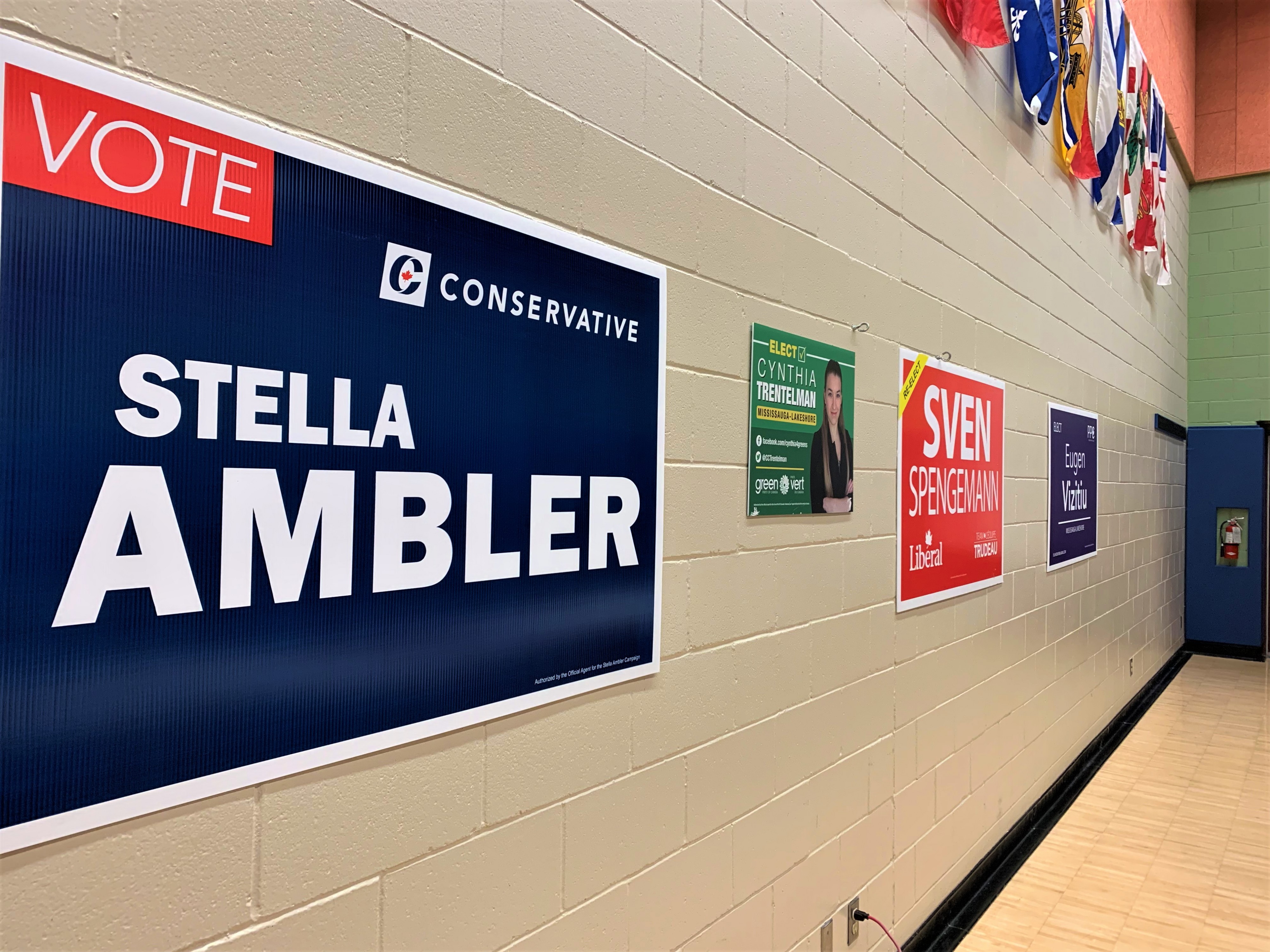 Most recently, on Thursday evening, the candidates met in the Mississauga Seniors Centre on Cawthra Road for a debate which dealt with climate change, indigenous issues and the planned development of Lakeview Village. The debate was organized by the Lakeview Ratepayers Association, who are currently focused on new developments in the area.

While candidates across Peel may have parotted their party position on issues in debates and interviews, the Lakeshore hopefuls are different. In a previous interview with The Pointer, Conservative candidate for Brampton North, Arpan Khanna, said “my party’s stance is my stance,” summing up the attitudes of some candidates. In Lakeshore, that approach doesn’t fly.

Perhaps this is because the incumbent Spengemann has the same four years of political experience as his chief rival, Stella Ambler. Maybe it’s because of the level of electoral engagement in the riding. Regardless, Spengemann is the only Liberal incumbent in Mississauga to have committed to advocating for federal funding of the Hurontario LRT downtown loop, while Ambler told voters at the most recent debate she had regularly defied the party whip as an MP between 2011 and 2015.

“I voted against my own party quite a few times and that’s because that is, sometimes, what a good member of parliament does,” Ambler told voters in answer to a question as to what the candidates would do if their party plans were detrimental to the riding.

Without referencing his own record, Sven Spengemann also implied he would vote against his party for the good of his riding.

“The Liberal Party has three areas where party discipline trumps [everything else],” Spengemann said. “These are platform issues such as the Charter of Rights and Freedoms issue, something related to the budget or a confidence vote. In those cases, it is expected that the member will vote with the party and in other instances she or he is much freer to cast their vote.” 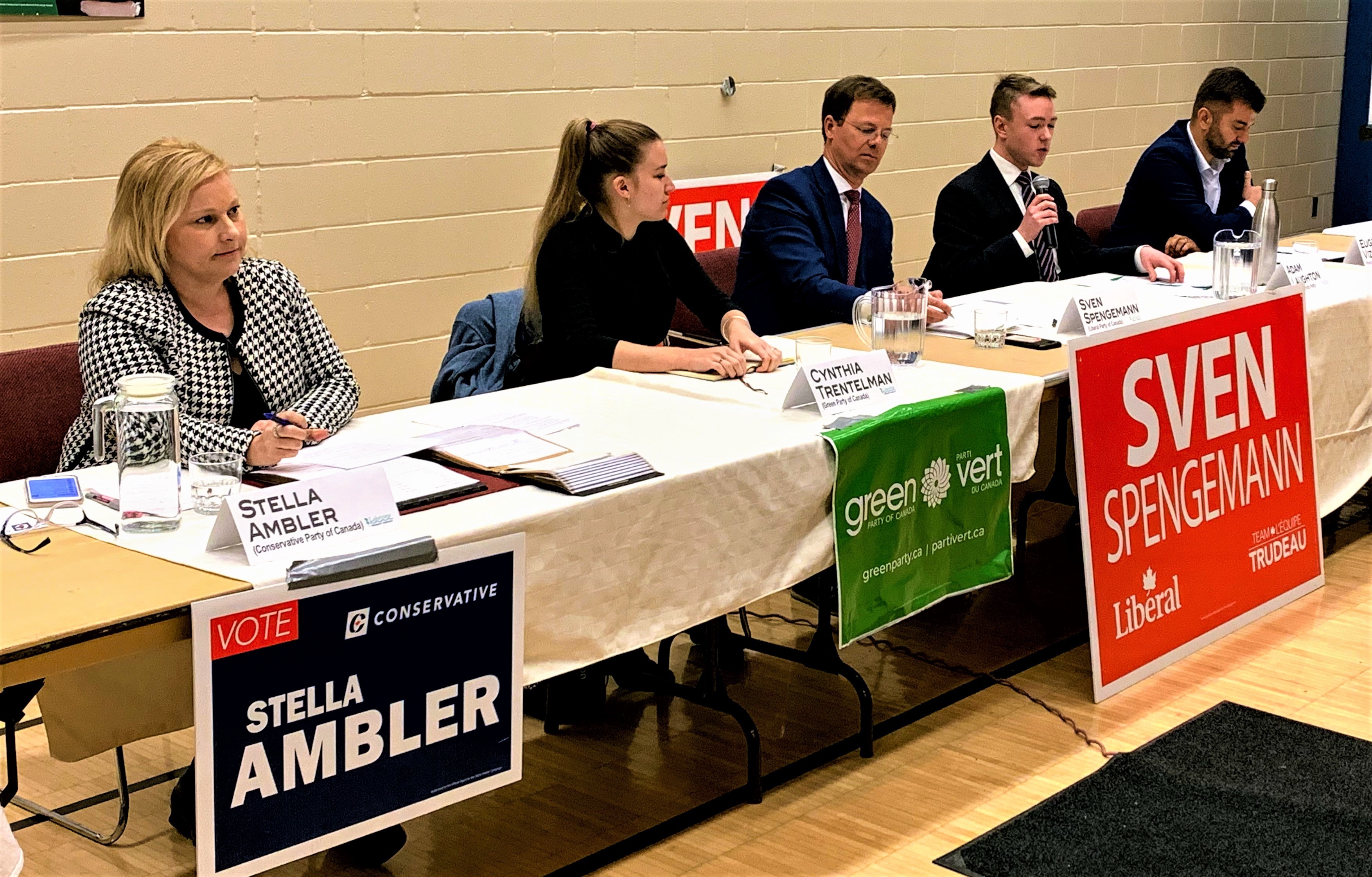 The issue of abortion was also raised, with Ambler telling those assembled she was pro-life.

“I am personally pro-life,” she said. “In my party, that’s allowed. If I wanted to run as a Liberal or a Green Party candidate, I could not do so, so I am very happy that I have this opportunity.” However, Ambler said that the Conservative Party leadership had said no changes would be made to the current legislation, arguing that the fact abortion laws were not rolled back under 10 years of Stephen Harper was evidence no change would occur now.

Spengemann, Trentelman and Laughton all voiced  their support for a woman’s right to choose, while Vizitiu said he would consult with his community of such a vote came up.

On the hyperlocal issue of the Lakeview Village development, candidates offered well-researched opinions. The development, at the centre of Mississauga Lakeshore’s future, is an innovative proposal to build on the site of the former Lakeview Power Plant. Residents have indicated they want the plan to open the waterfront to the public with low density and parkspace, but are open to higher density to the north of the project, which is also focusing on transit connections. (Read about it by clicking here.)

Laughton of the NDP said the project offered a superb opportunity to curb emissions with energy efficient homes, while Trentelman of the Greens said she wanted to protect the creation of an indigenous village within the project. The PPC’s Vizitiu welcomed the development as an opportunity to lessen demand on the housing market.

In reality, the eventual MP will have very little say over a municipal planning matter, but the eventual winner could help advocate at a local level, and perhaps could use some influence to help shape the project.

The third and final debate in Mississauga—Lakeshore was all about local issues. Despite the fact that Justin Trudeau and Andrew Scheer have promised nothing specific to Mississauga in their various campaign stops in the city, the Liberal and Conservative candidates in the Lakeshore riding were keen to talk about the backyard issues that are actually important and on the minds of their neighbours, the people who expect to have their specific interests represented in Ottawa. 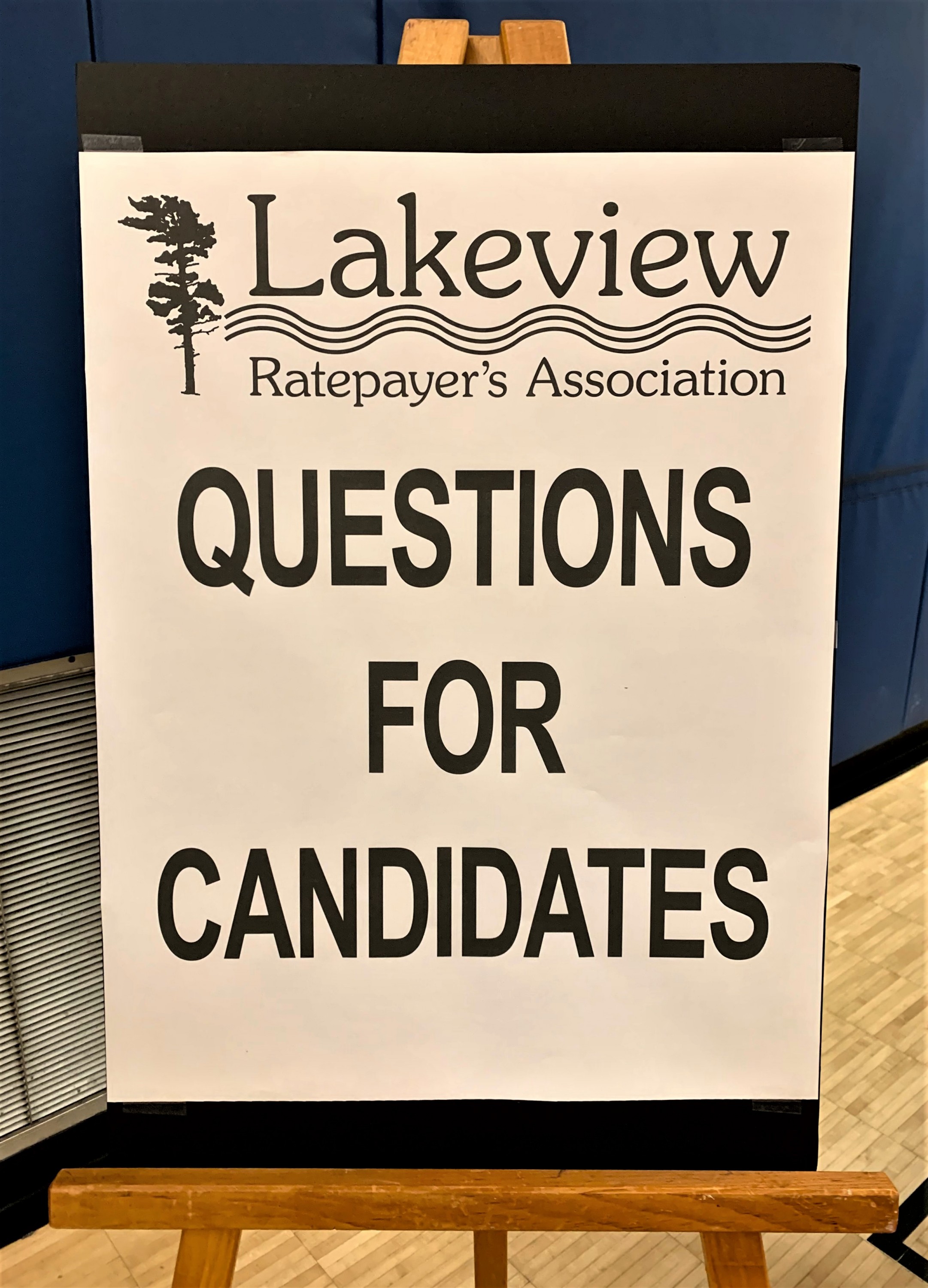 Lakeshore’s engagement and the willingness of candidates to participate is a good recipe for success. With candidates aware that appearance at events and debates is compulsory, significant power clearly rests in the hands of the riding’s 117,000 plus residents.

Exactly how Lakeshore and Mississauga voters wield that power on Monday remains to be seen.