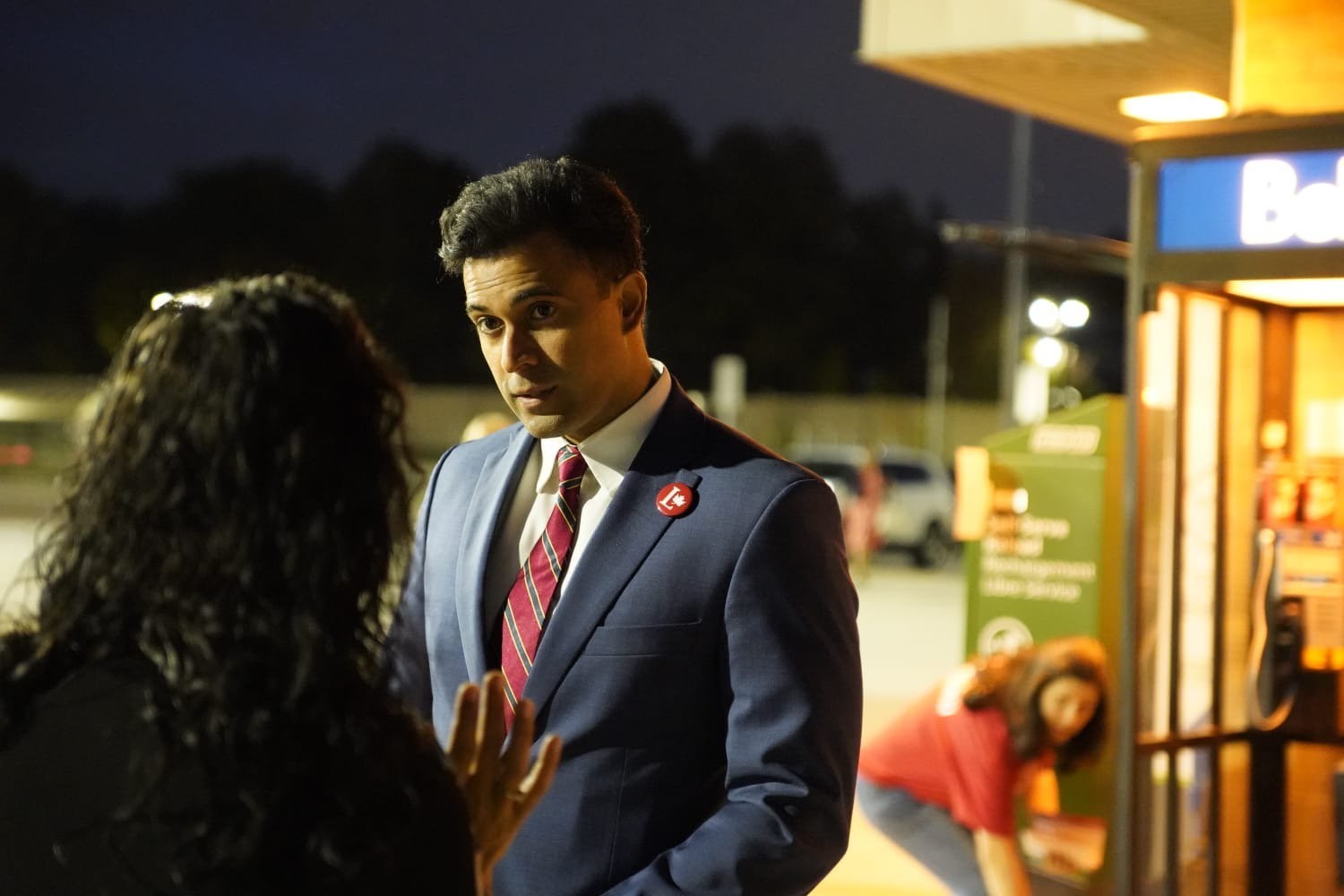 Politics can be a bloodsport, with election season matching the gladiatorial combat of Ancient Rome. The 2019 federal election has been no different, with Conservative Leader Andrew Scheer calling Liberal Leader Justin Trudeau a fraud, and Trudeau equating Scheer to the unpopular cost-cutting Premier Doug Ford.

Liberal MP Gagan Sikand of Mississauga–Streetsville got a stab in two days before the election officially kicked off. “#ScheerWasSoPoorThat he had to buy his Conservative Values second-hand from Stephen Harper,” Sikand tweeted on September 9.

Scheer has discussed how, growing up, his family struggled with money. He contrasted his middle-class roots to the wealthier upbringing of his political counterpart, the son of a former prime minister. Trudeau inherited a substantial amount of money from his late father’s estate. However, there have been conflicting reports and estimates as to how much Scheer’s parents earned annually and how “middle class” they actually were. Sikand’s original tweet no longer exists on his Twitter timeline and feed.

Scheer responded to Sikand’s tweet that day. “Like millions of Canadians, I grew up middle class. When Trudeau’s Liberal MPs mock me for that, they mock you too,” Scheer tweeted. Less than four hours later, Sikand responded. “I would never mock a struggling family, as I grew up watching my dad drive a cab to make ends meet,” he tweeted. “You should talk to the families in my riding who live off one income, don’t have drug plans & face anti-immigrant, homophobic & Islamaphobic sentiments from their local candidate.” 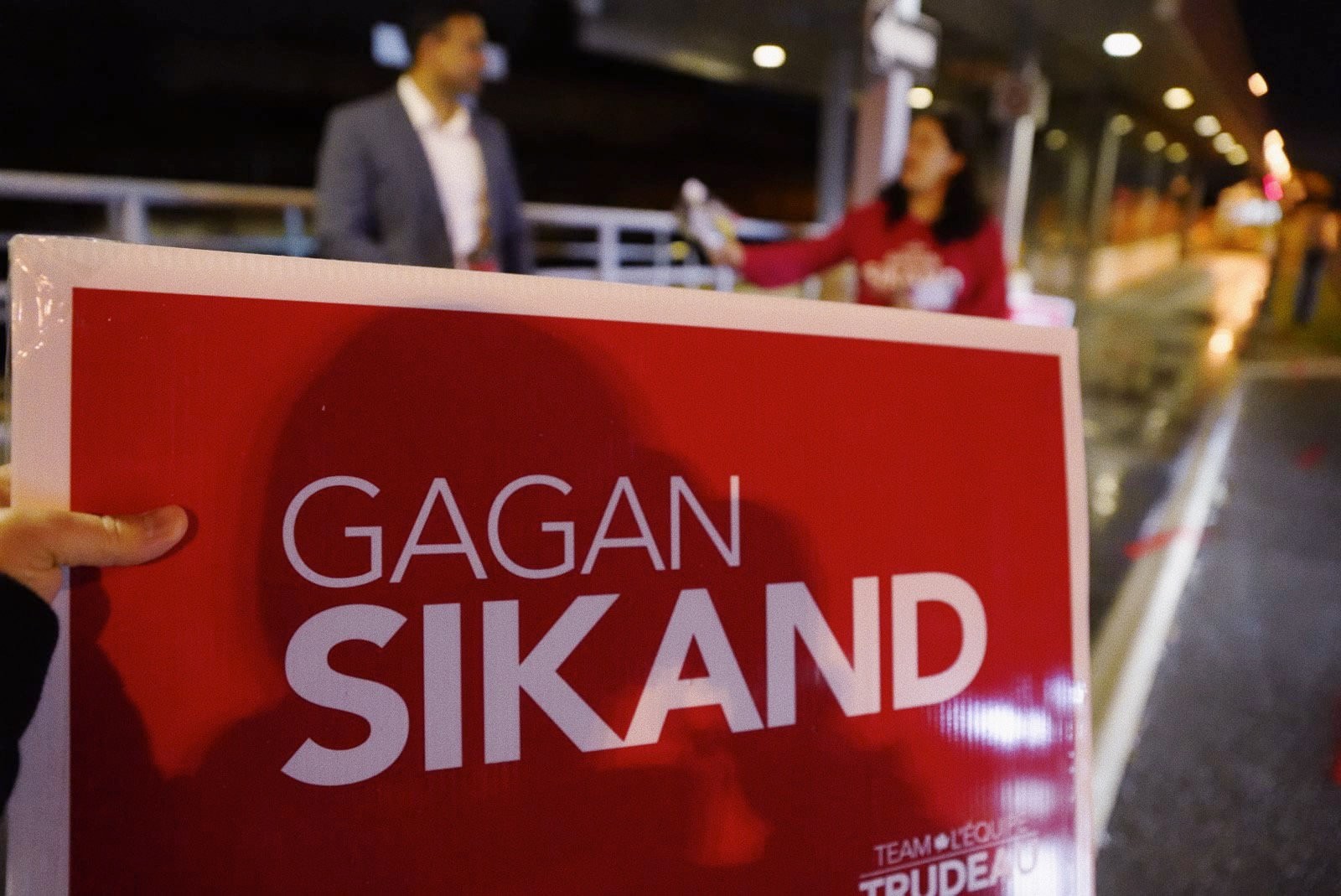 Sikand’s campaign did not immediately respond to requests for comment.

How has Sikand advocated for the constituents of Mississauga–Streetsville since he first addressed the House of Commons in December 2015? Open Parliament records as well as the Hansard Index of exchanges in the House provide a window into what the incumbent has discussed, championed and accomplished during the past four years.

The most recent committees Sikand served on were the Library of Parliament, as a joint chair and member, the Liaison Committee and the Transport, Infrastructure and Communities’ committee. Infrastructure has been a prominent issue for Mississauga this election. With the city’s infrastructure gap at roughly $258 million, poised to balloon to $1.5 billion in the next decade, the municipal government is asking the feds to supply “long-term, predictable and sustainable funding.”

When Sikand first addressed the House of Commons as an MP on December 11, 2015, he touched on a variety of issues pertaining to Mississauga–Streetsville as well as the rest of Canada. He discussed the adversity middle-class families in his riding face, the education of future generations, infrastructure and affordable housing.

“This middle-class riding [Mississauga–Streetsville] has faced a number of challenges in the past. I have spoken with single parents who find it difficult to provide for their children,” he said. According to census data, the median after-tax income for individuals in Mississauga–Streetsville (15 years of age and over in private households) was $33,166 that year — higher than the provincial average at the time, which was $30,641. 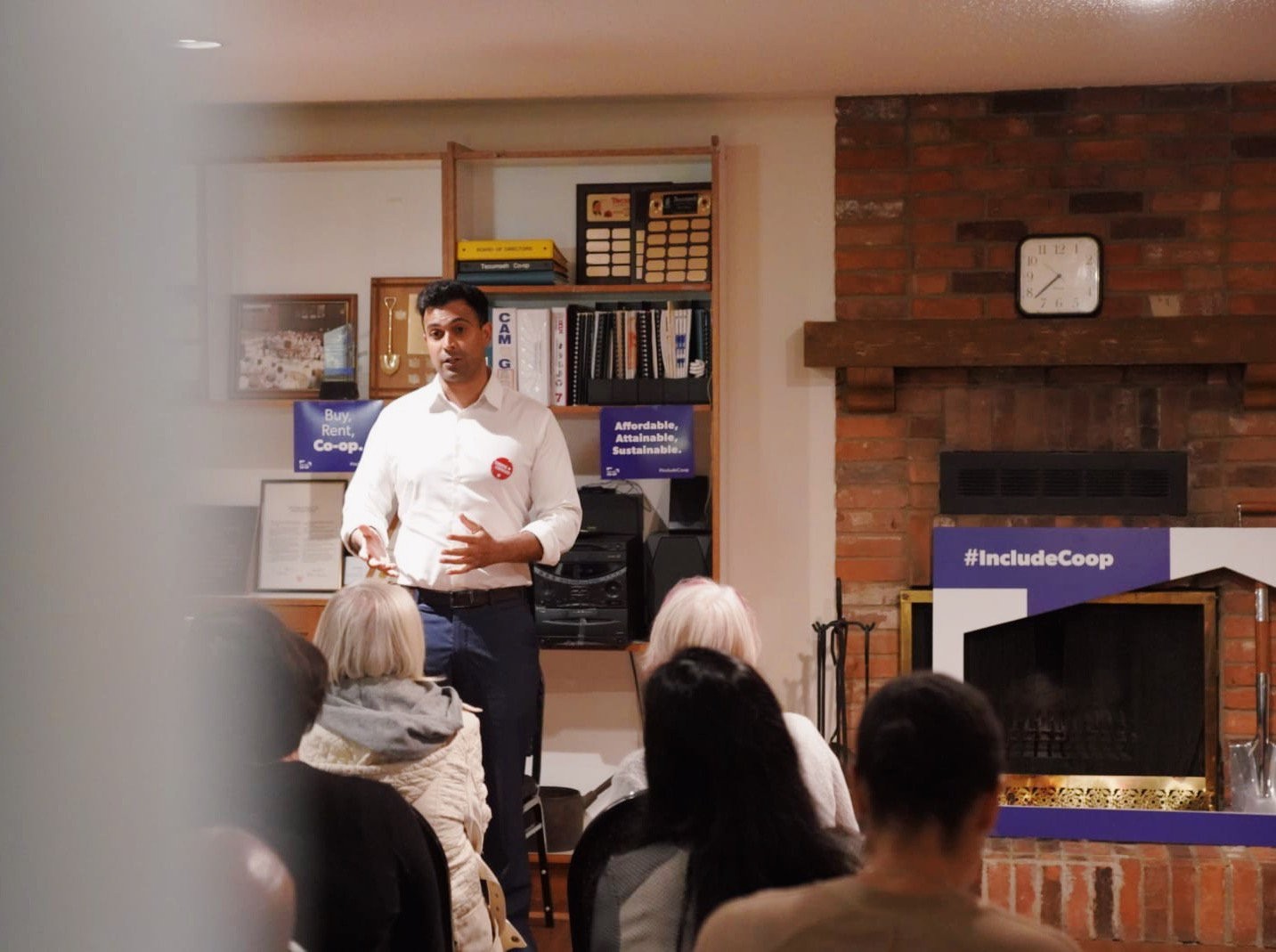 “One of the biggest concerns that parents have in the riding of Mississauga–Streetsville is that their children will not have the same opportunities that they did,” Sikand said in the House. “It is imperative that future generations are educated in order to ensure the continued prosperity of our great nation.”

Despite the federal government announcing in 2017 that it would supply up to half the funding for 51 sustainable transit-service projects in Mississauga (translating to more than $58 million), the problem is far from solved. Mayors Bonnie Crombie of Mississauga and Patrick Brown of Brampton were among 22 representatives of the Federation of Canadian Municipalities’ Big City Mayors’ Caucus who asked federal leaders in September to commit to a permanent public-transit funding mechanism. Since last year, Mississauga has only received $77.3 million in infrastructure money from the $188-billion Investing in Canada Plan — a key part of Trudeau’s 2015 campaign.

Affordable housing is an issue for one in three Mississauga households. That includes one in eight in deep need (spending half or more of their pre-tax income on housing) and one in 12 in “severe need” (spending 70 percent or more), according to a 2016 city report.

In his four years as an MP, Sikand has brought forth one bill to the House of Commons, according to Open Parliament records. Introduced as a private member’s bill, Bill C-247 died as of April 4, 2017. The bill set out to amend the Criminal Code to allow a peace officer to use a “passive detection device” to detect alcohol in the “immediate vicinity” of an individual the officer believed was drinking before operating a motor vehicle.

He discussed the nature of the bill in a May 3, 2016 House debate. “Impaired driving has touched constituents in every riding across the country. My riding of Mississauga–Streetsville is no exception,” Sikand said. He went on to describe how, in the summer of 2015, his constituents lost a “local leader,” but didn’t mention his name “out of respect” for the family. “Soon after being elected, I received an email from a constituent who was greatly saddened by what had happened and also concerned that such senseless tragedies continued to occur at alarming rates in our country. She implored me to take action, and I am now doing so with Bill C-247.”

Sikand did not introduce any other bills to address the needs of middle-class families, education, infrastructure or social housing. In the months following his House discussion of Bill C-247, Sikand did bring up a different bill: C-26, An Act to Amend the Canada Pension Plan. “I have had many conversations with my constituents in Mississauga–Streetsville, ranging from security for seniors to things that concern youth. However, one of the more consistent concerns that has been brought to my attention is what our government is doing to help working-class Canadians who are looking to retire,” he told the House. 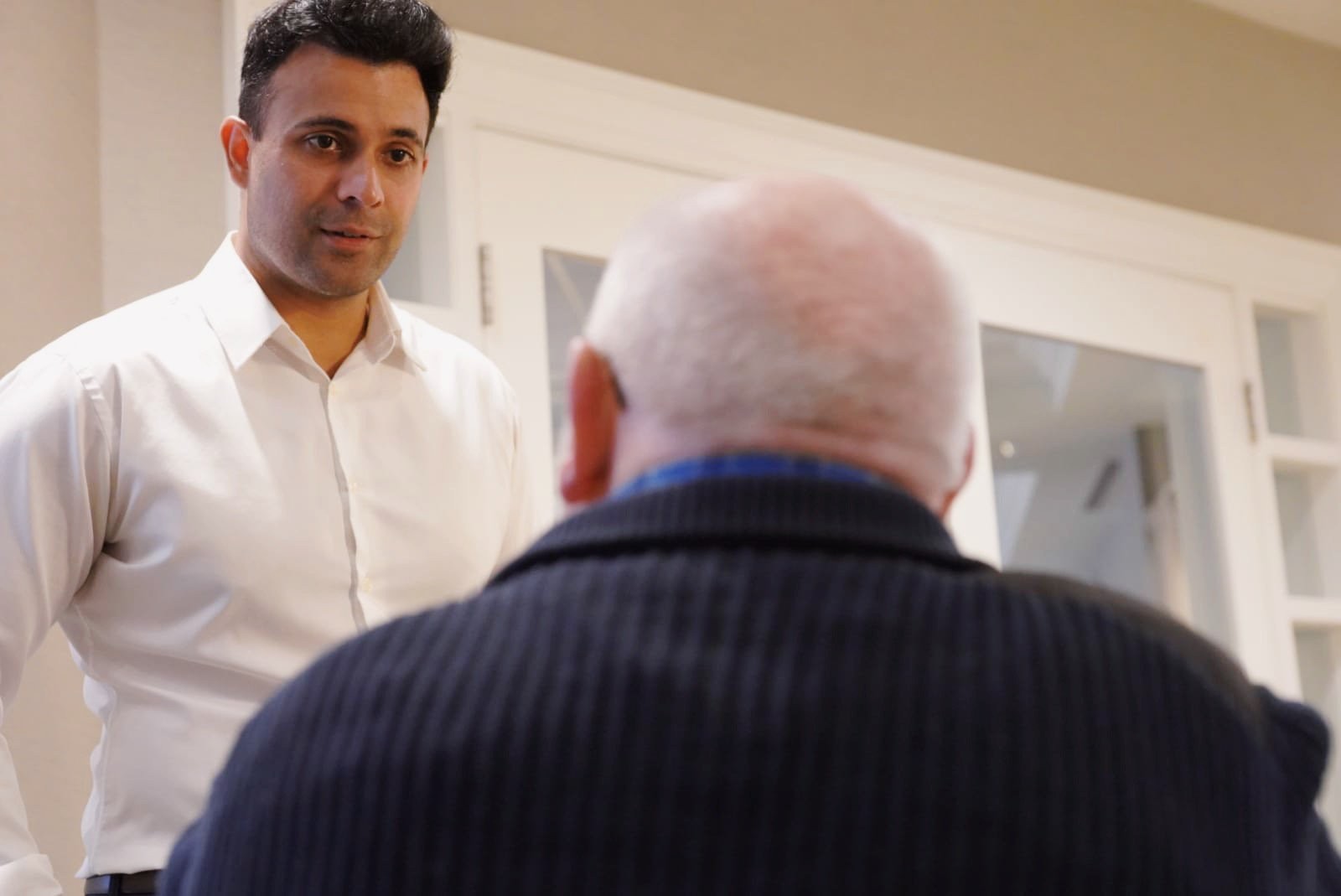 Sikand meets with seniors at the Credit River Retirement Residence during his campaign.

A 2018 poll by CIBC found that 32 percent of Canadians surveyed had nothing at all set aside for old age. Those who have been saving up are often concerned about outliving their money; according to Statistics Canada, the average 65-year-old nowadays is projected to live to age 86. To compound the issue, more than two-thirds of Canadians who reach the age of 85 have a disability, the C.D. Howe Institute noted.

One of the pledges the Liberals have made to seniors this election is to increase the Old Age Security benefit by 10 percent when people turn 75, then continue to raise it along with inflation. The party has also vowed to increase the Canadian Pension Plan and Quebec Pension Plan survivor’s benefit by 25 percent. While the number of seniors living in poverty nationwide decreased between 2016 and the year after (from 4.9 percent to 3.9 percent, respectively), there were still 238,000 seniors suffering in 2017.

On November 23, 2016, Sikand turned to discuss young people — specifically, the Mississauga–Streetsville Youth Council. “Youth from all across my riding [recently] met with me to bring their concerns to my attention and to suggest how our government can improve and what we need to focus on,” he said. “I was especially pleased about the mature manner in which they discussed mental health and how comfortable they were sharing their pressures with me.”

According to Youth Mental Health Canada, young people are among the highest-risk populations for suicide and there is an average wait list of 200 at every residential treatment centre. The Liberals have laid out plans to address mental health as part of an additional $6-billion commitment to health care over the next four years.

On March 6, 2017, Sikand announced in the House that Mississauga–Streetsville would receive $429,000 of the $2.5 million doled out from Innovation, Science and Economic Development Canada — the federal institution that leads the Innovation, Science and Economic Development portfolio. Sikand outlined on social media how the $429,000 would support projects such as the improvement of Glen Eden Park and Godwick playgrounds, the Osprey Marsh Loop Trail, near Britannia Road West and Glen Erin Drive, and John Clipperton Park.

Sikand was active on social media this past year, describing meetings and events with constituents. He spoke with students from the Canadian Summer Jobs Program, part of the government’s plan to help youth facing barriers to employment; attended the Credit River Retirement Residence to talk to seniors about election issues; and dropped by the Sikh Youth Summer Camp at the Shiromani Sikh Sangat Dunwin Gurudwara, to name a few.

He also used social media to trumpet Liberal policies, such as the Canada Child Benefit, a tax-free benefit paid monthly to eligible families. On July 20, he tweeted: “Today’s the day — the Canada Child Benefit will be increased for the second time! The CCB is a critical part of our plan to grow the middle class & make life more affordable for Canadians. In 2019, the CCB has helped 12 thousand families in Mississauga–Streetsville.”

In terms of Sikand’s voting record in the last session, he joined with the majority of his fellow Liberals on every item in a list of 25 key bills that were passed into law, according to votes.mp, a website that details MP voting records. The only instance in which the Liberal Party appeared somewhat divided on a bill was the case of the Genetic Non-Discrimination Act. The bill prohibits companies and individuals from forcing a person to undergo a genetic test in order to receive goods, services or employment.