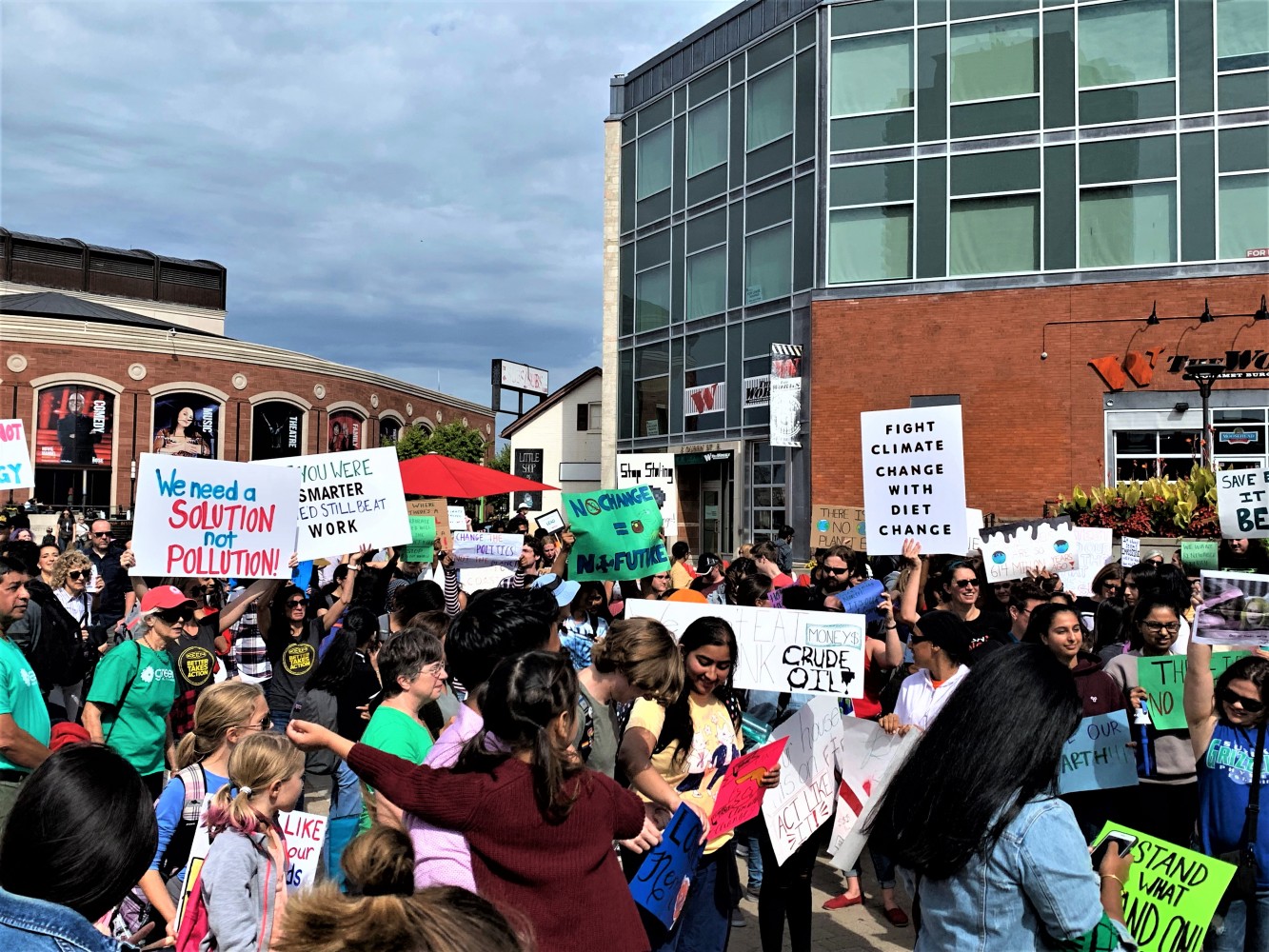 There was something of an irony in Garden Square on Friday afternoon, as Brampton’s drivers honked their support for climate protestors from inside their single-occupancy vehicles. Nonetheless, there was an appetite for change from the youth of this car-dependent city who skipped school to share their horror at the fast-approaching impact of climate change.

“People are fake caring about it,” 14-year-old Sausam told The Pointer. Standing by the side of the road waving her placard at passing drivers, the school pupil said she is passionate about the world she will grow up in. Using meat consumption as an example of the little changes we can make, she said even her own neighbourhood had changed in just 14 short years. “I have seen pictures from my neighbourhood in the past. When I was little it was green and there were plants everywhere, now there is garbage and things are dying.” 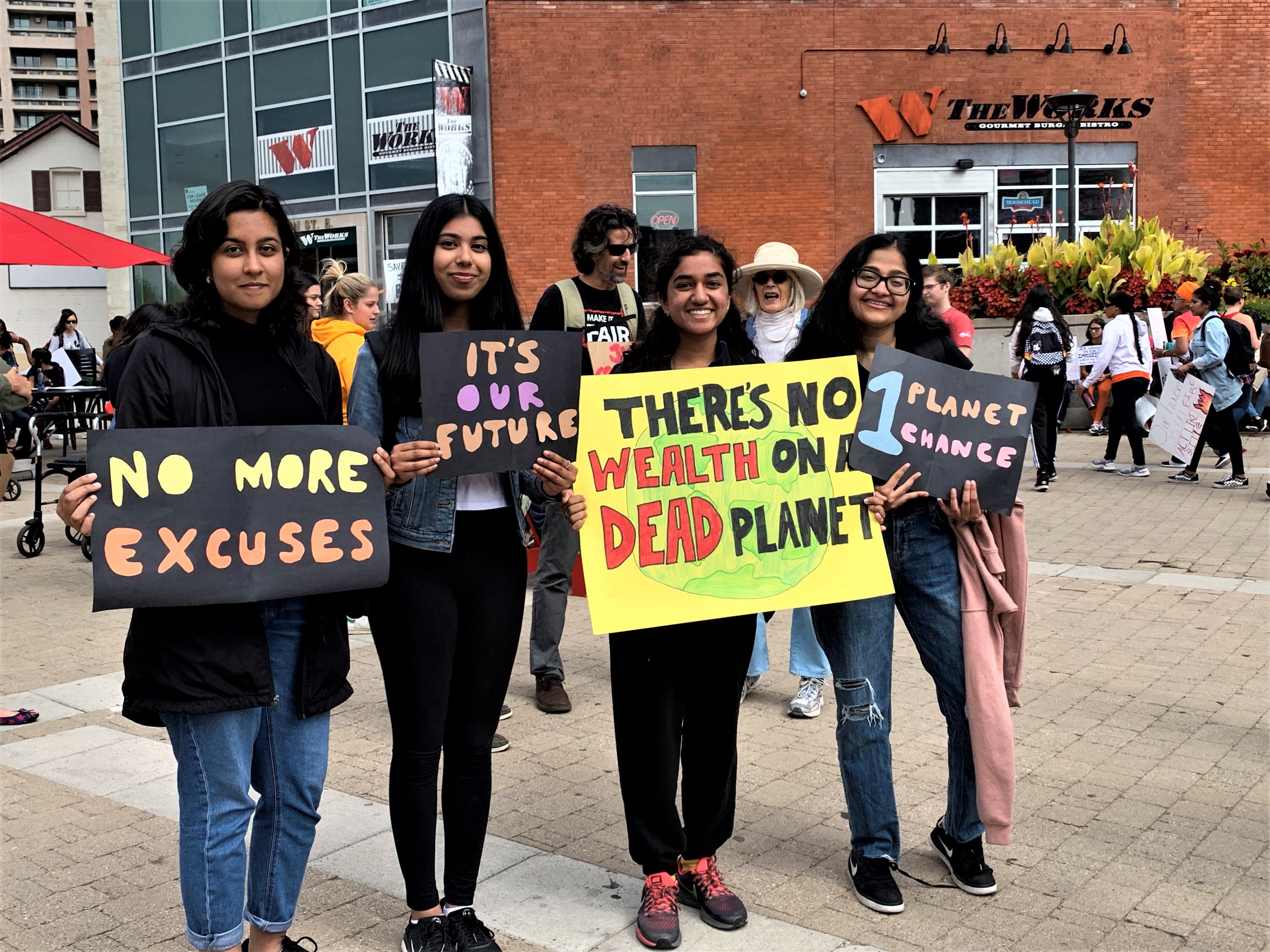 Sausam is one of many school students who walked out of their classrooms around the world to demonstrate in support of climate action. Greta Thurnberg, the inspiration behind this particular form of global action, was in Montreal on Friday with hundreds of thousands of protestors, where she met with Liberal Leader Justin Trudeau to discuss climate change.

Trudeau, though, is in hot water with some young people in Brampton over what they see as climate hypocrisy. Amolak, 12, said he wanted Canada’s next Prime Minister to be “more eco-friendly and green” than the last four years of policy, saying that the TransCanada Pipeline was “obviously always going to be a failure.”

At just 12, the young Bramptonian says the future of the planet trumps his need for good grades this week. “I care about my future and the earth more than my education,” Amolak told The Pointer. “Even if I care about my education right now, if there is no future earth for me then there is no point in education. It is like being homeless, having a lot of money and not being allowed to buy a house. I am here to tell other people to stand up: don’t be shy, don’t think the government is a big person who can crush you. I am 12 years old and if I can stand up, you can stand up too.” 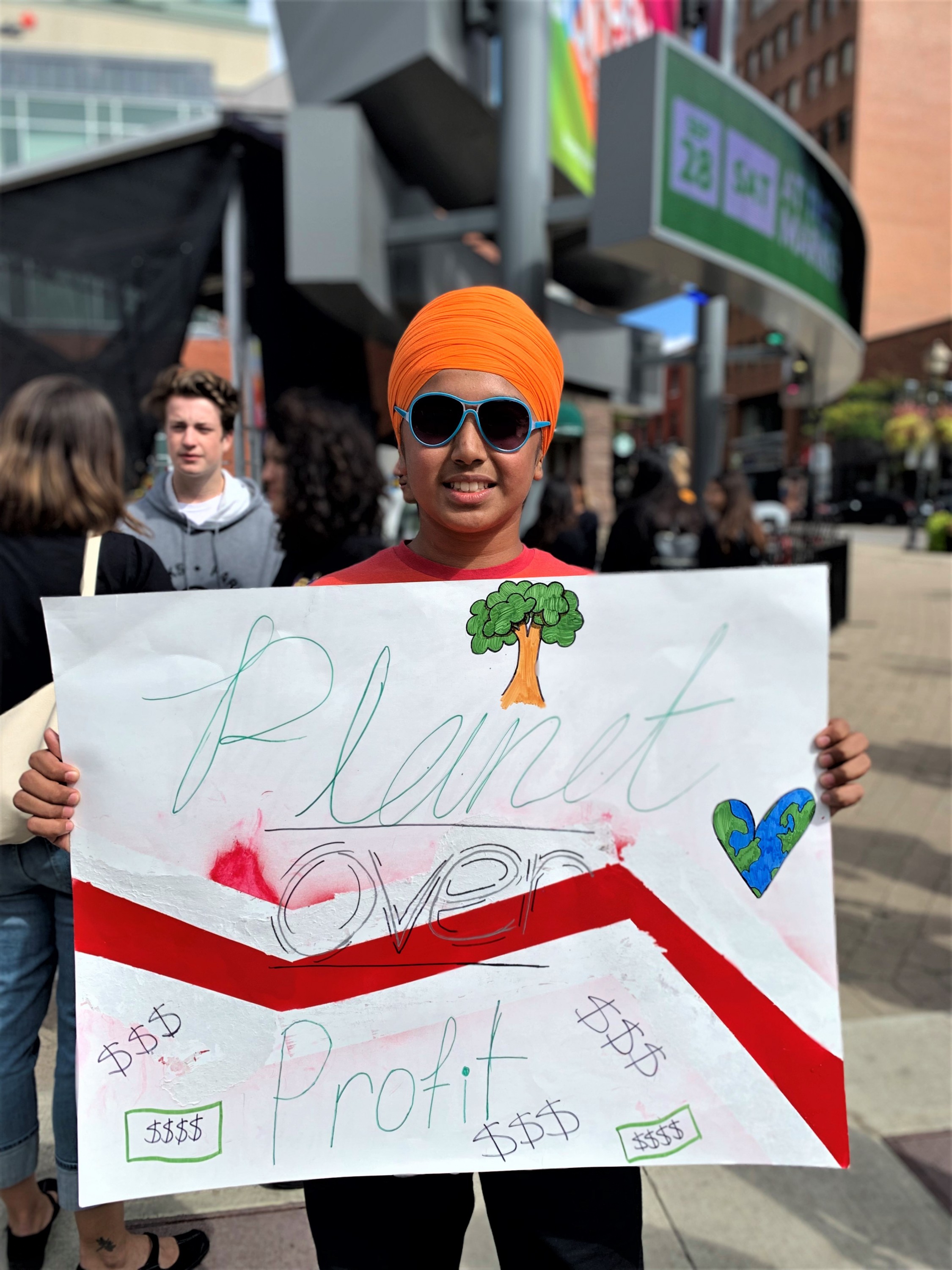 The climate strike was organized by a group of five Brampton and Caledon-born university students. Impassioned by their desire to protect the planet, they began to work together and, in four short months, organized a protest in Garden Square. With their first event a success, the group plans to establish a youth summit on climate change in the city and delegate to council.

Samantha Casey, one of the 20-year-old organizers, told The Pointer it was key to educate voters in the context of the upcoming election. With many youth climate activists below voting age but simply more informed on climate issues than their parents, she talked about lobbying within the household. “I really want to see people vote climate this election - it’s something we’ve been promoting this whole time,” Casey said. “This isn’t a parties issue, this is a real issue and I hope people think about that while they’re at the polling station. I don’t care what your family votes, I hope people actually do their [own] research. Do parties cover what you want? And do they also cover what you want as a future?” 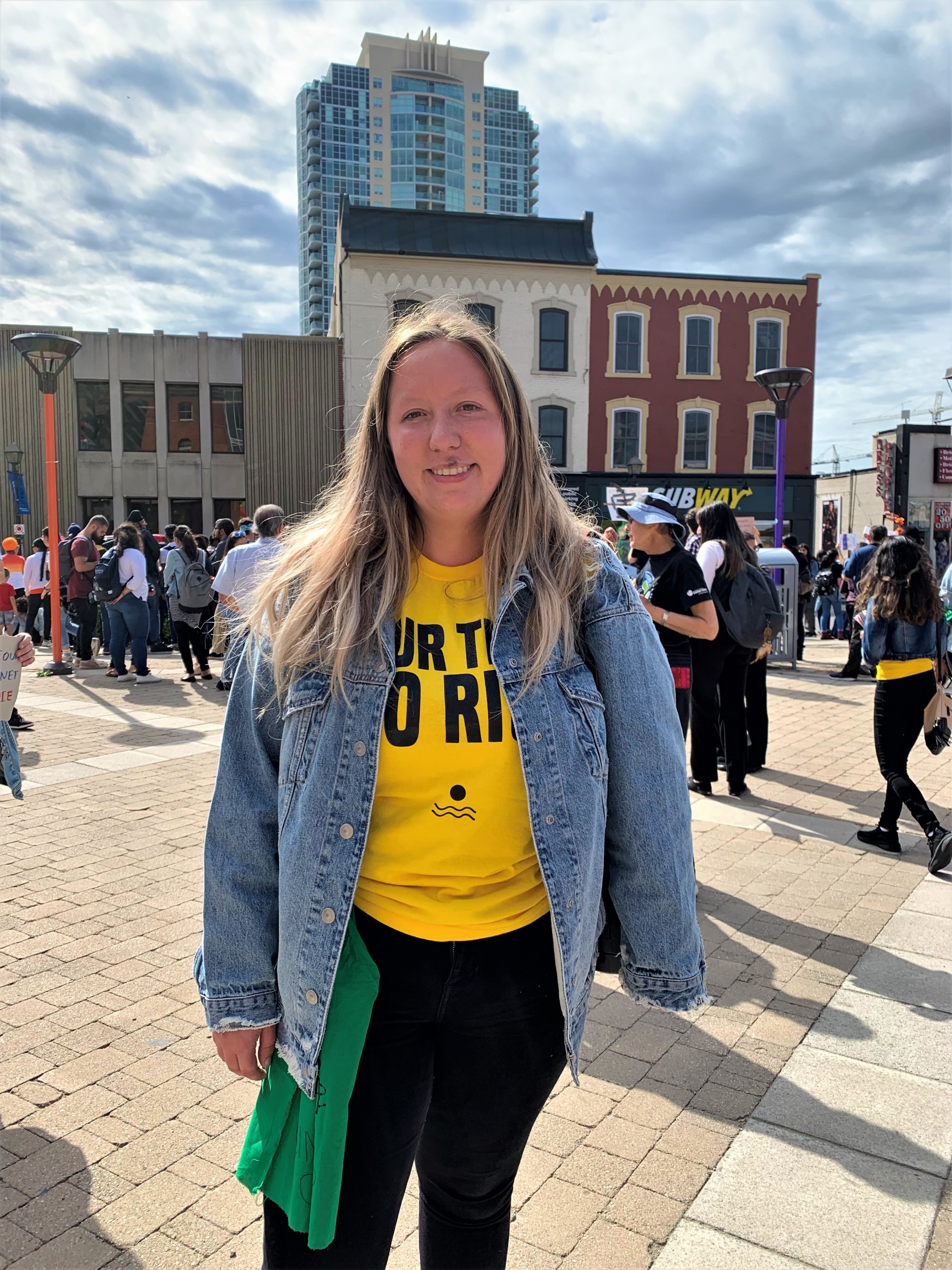 “My parents have changed what their vote was simply because I started talking to them about climate action and they listened to me.”

Casey said she has seen changes in the Town of Caledon over her lifetime. Planning, in particular, has propelled climate issues forward. “Caledon has rapidly changed,” Casey explained, “I went away to university and every time I come back there’s a new subdivision and it’s low density housing. I am so privileged to live [in Peel] and not suffer the immediate effects right now from the climate crisis, but I know other communities are.”

Protesting on any issue at the moment is well timed. With a federal election looming, candidates from all parties are keen to listen to the concerns of voters and adapt their platforms to garner attention from voters whose priority is the planet. 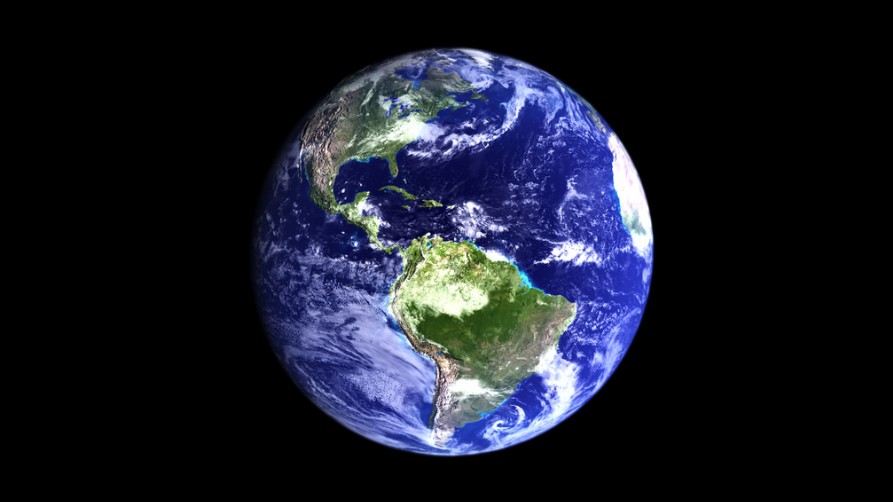 Brampton’s event was no different.

The Pointer observed candidates from the Green Party, Liberals and NDP all in attendance. All five Brampton candidates for the NDP turned up to Garden Square for at least some of the event, along with three Green candidates. Sonia Sidhu (Brampton South), Maninder Sidhu (Brampton East) and Ruby Sahota (Brampton North) were all in attendance from the Liberal Party, though no one from the Conservative or People’s Party of Canada campaigns appeared to be present.

Maninder Sidhu declined the opportunity to be interviewed on the record because he was attending the event in a personal capacity – as a father of two. However, Ruby Sahota spoke to The Pointer about her government’s record on climate change and plans afoot if she is re-elected.

Though she acknowledged growing interest in climate policies, Sahota said that economic stability remained the primary issues voters talk about. “With these demonstrations and marches, it [climate change] is top of mind again and I think that’s a good thing,” Sahota said. “Being here, listening to constituents and what they have on their minds is the best way to be an effective representative. But I am still hearing mixed things at the doors. The economy is always going to be the number one (issue) on people’s minds, but I think this is now number two.” 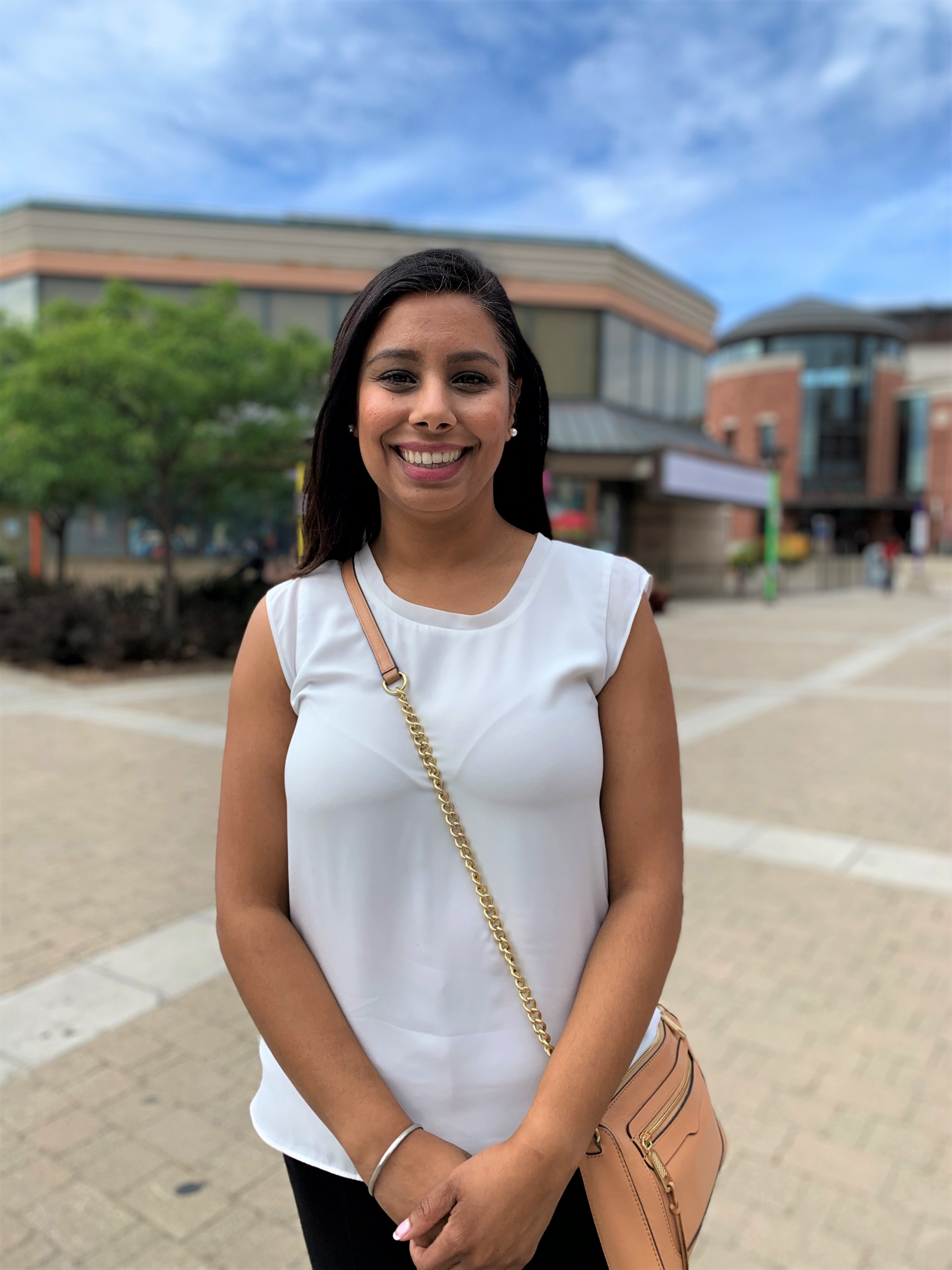 Climate policy is, of course, broader than planting trees. Infrastructure decisions, air tax rates and industry subsidies are just a few things which impact on emissions and climate strategy. When challenged on Brampton’s troubled public transit network, Sahota said that ridership surges had caught her government off-guard, while she committed to championing future city-projects for federal funding.

“Ridership has grown so quickly that often the numbers which are looked at are from past years and I think that is something we can work on because the growth has been so quick here in Brampton,” Sahota explained before pointing to federal funding to expand the city’s bus storage facilities as an example of money which has come to Brampton. She also mentioned the city’s federally funded electric bus pilot scheme, an $11 million commitment for eight electric buses and charging infrastructure. Sahota said that when the Progressive Conservatives cancelled their portion of funding at the provincial level, she and her Liberal colleagues jumped in to keep the plan alive. 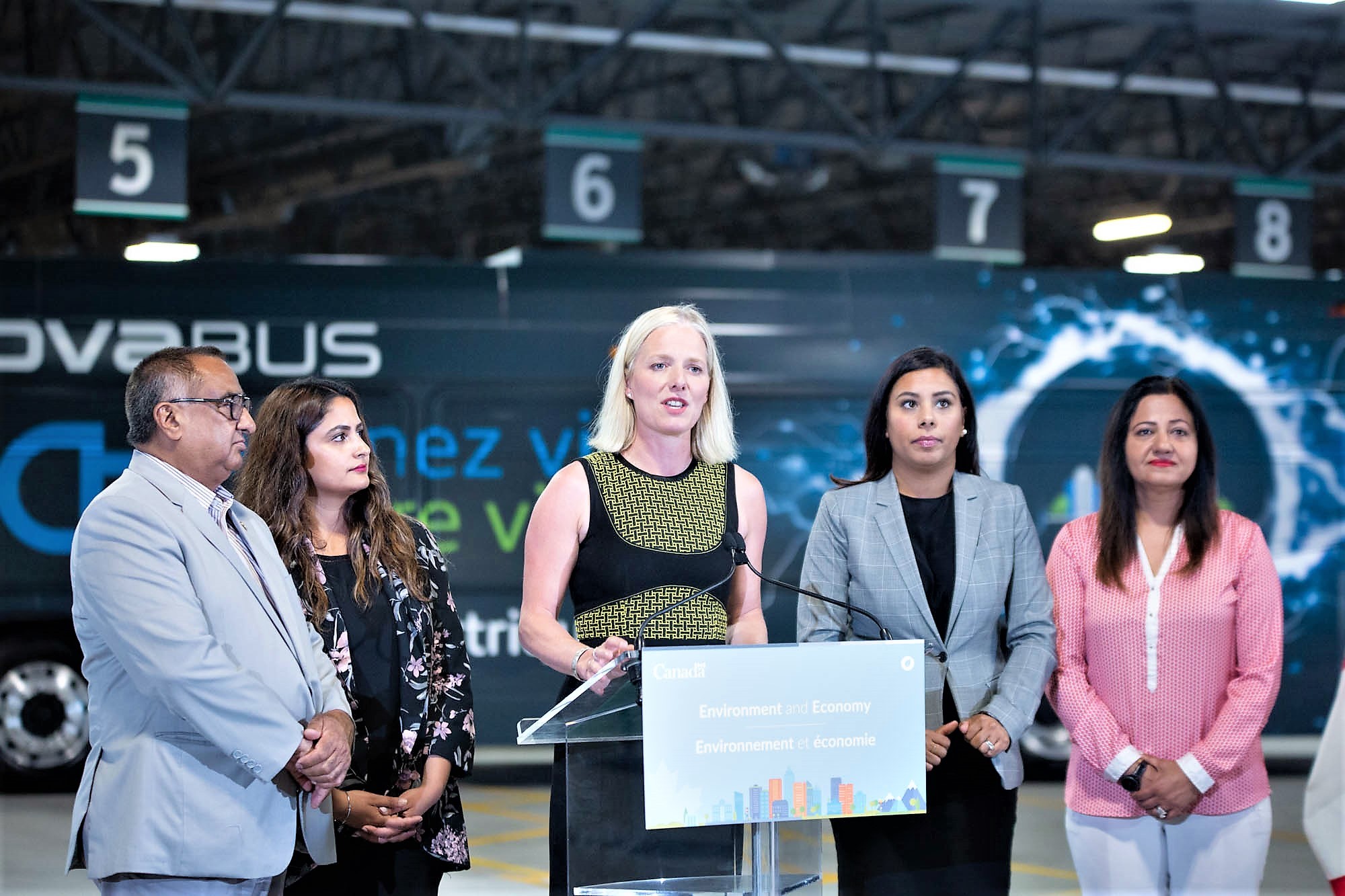 Promising to listen to the demands of climate activists in Brampton and champion her city’s infrastructure if re-elected, Sahota said that bureaucratic inertia at the municipal level was also holding green planning back. “Often times [proposals for federal funding] had become so bureaucratic that members of parliament weren’t even informed some times as to what proposals were being submitted. We have encouraged our councillors to speak to us about proposals which are being submitted because we want to be their champions on Parliament Hill. We want to have the ear of ministers and say that their department has received something.

“We want to bring those funds. Nothing makes me happier than bringing funds to the City of Brampton.”

Ultimately, though, the climate action by young people in Brampton on Friday wasn’t about political promises, it was a desperate demand for tangible action. Candidates present at the event would do well to remember the conversations they had with young voters, many of those gathered exhorted. They want politicians to remember the concerns which were raised and the promises they made.

As pictures spring up across social media of Liberal, NDP or Green candidates posing with school children in Garden Square, those images represent a promise to listen. If any of the candidates in attendance in downtown Brampton achieve their goal of getting elected, young voters and other Bramptonians will be expecting substantial action to follow.