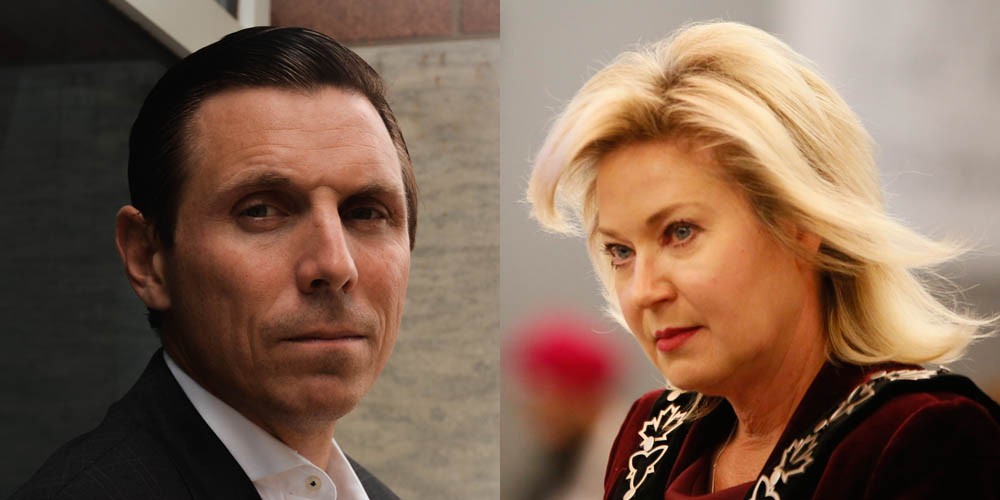 Crombie, Brown join other big-city mayors demanding Ottawa get its act together on transit funding

Mississauga Mayor Bonnie Crombie and Brampton Mayor Patrick Brown were among the 22 representatives of the Federation of Canadian Municipalities’ Big City Mayors’ Caucus, which convened in Toronto on Sunday for a weeklong conference of the National Assembly of City Transportation officials, aimed at getting federal leaders to commit to a permanent public transit funding mechanism.

The event provides an opportunity for both Mississauga and Brampton, two municipalities with clear transit needs, to have their voices heard. “Large-scale transit projects require a significant amount of money to not only build, but [also to] maintain and operate,” Crombie told The Pointer in an email. “As cities, we simply cannot afford to build transit on our own; we rely on higher levels of government for funding and support.”

Crombie went on to say that property taxes are not designed to fund large-scale capital projects. “As cities, we only receive nine cents of every tax dollar collected in Canada. The federal and provincial governments have a key role to play, given their revenue powers, in building this critical infrastructure, and by extension, our communities.” 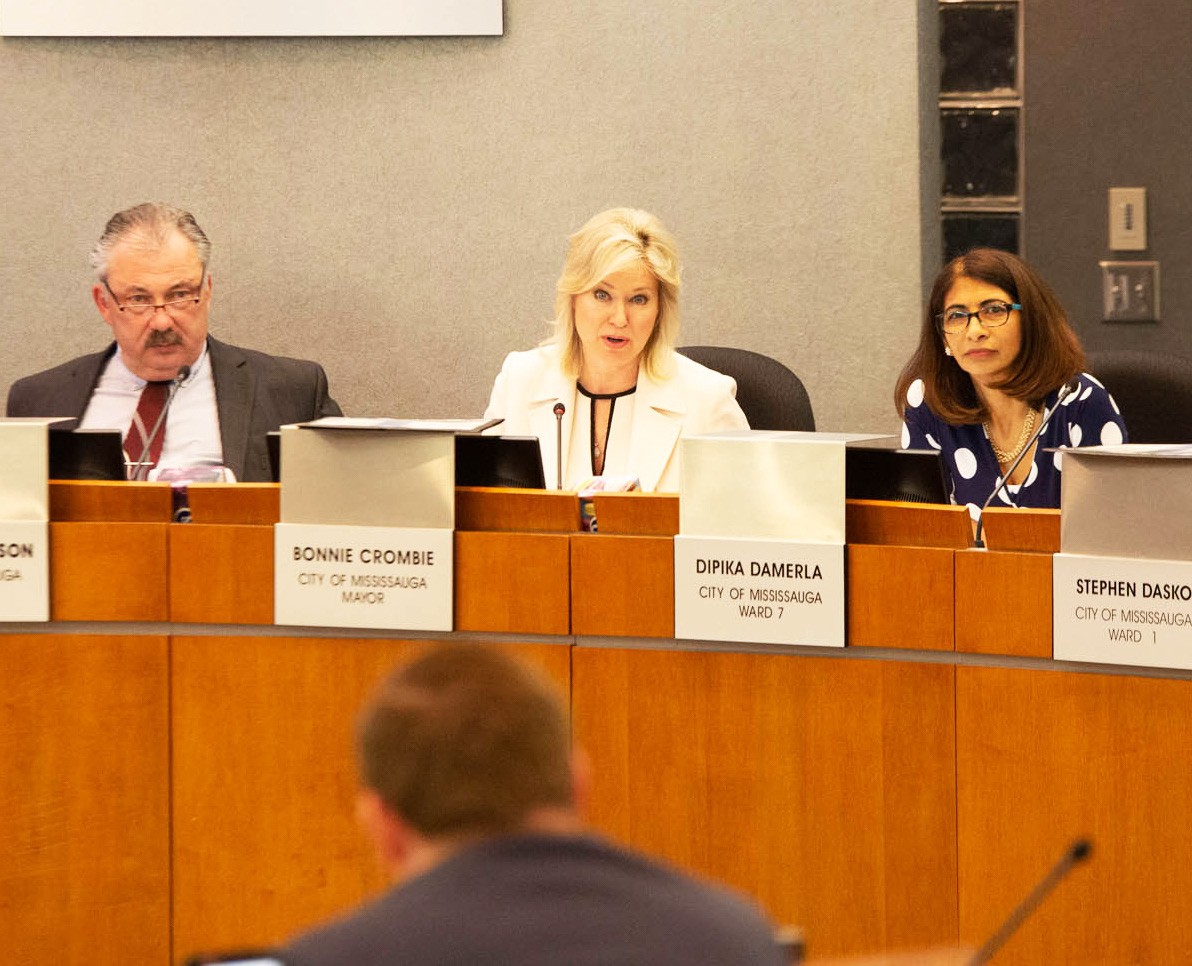 Crombie elaborated on the need for a long-term, sustainable and a stable funding model for infrastructure and transit. “City building is nation-building,” she said. “Predictable, permanent and direct funding from the federal government will help ensure that cities like Mississauga can build the transit we need to get people moving, break gridlock, reduce emissions and green our city for today and tomorrow.”

The province dedicated roughly $1.2 billion to $1.4 billion to building the Hurontario LRT from the Port Credit GO Station near Mississauga’s lakeshore to the transit hub near Shoppers World at Steeles Avenue in Brampton. The previous Brampton council voted against the Main Street route, which was provincially approved, and would have expanded the LRT into downtown Brampton and would have connected with the GO Station.

The province would have given about $400 million in funding for the Brampton segment of the project. However, once council rejected the route, the former provincial Liberal government said the funds would be put in a pool of money for other transit projects in Ontario. 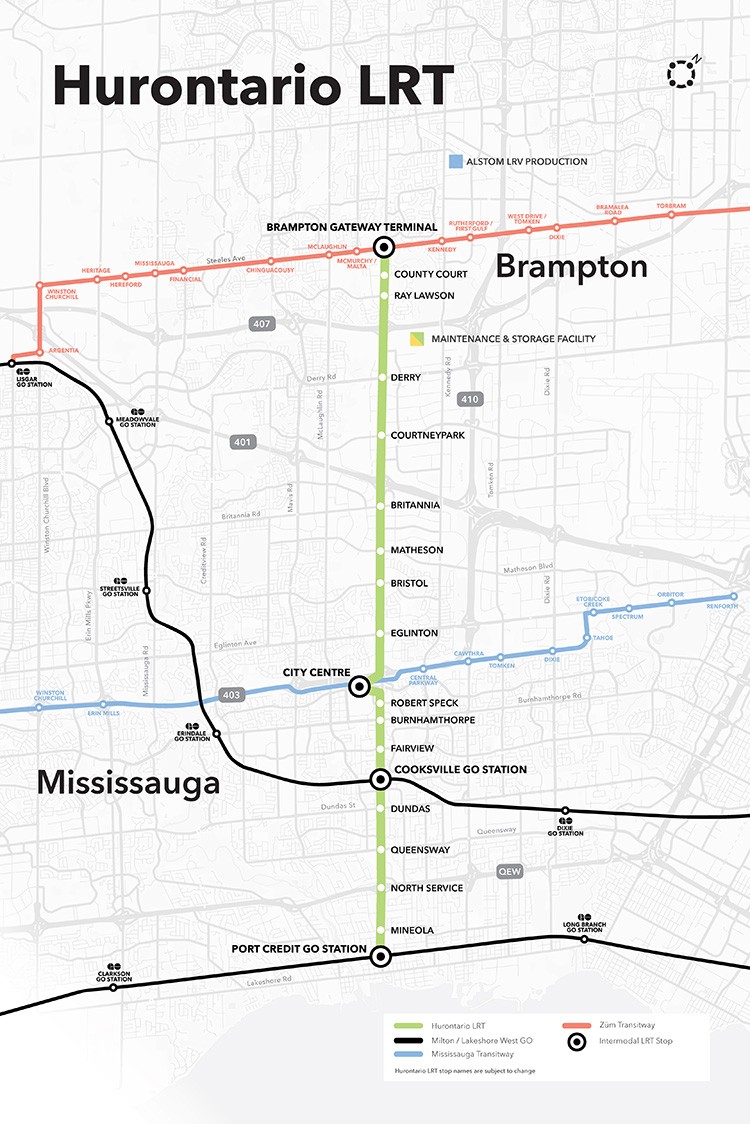 Recently, Mobilinx — a consortium of construction, design and maintenance companies, financed together by HSBC and National Bank — were chosen from a shortlist of three conglomerates to build the Hurontario LRT project. Within the context of Brampton, council has not been able to arrive at a unified decision on the future of high-order transit in the city, as the Main Street route could either go partially underground through a tunnel at a cost of as much as $1.7 billion, or remain a surface alignment throughout at a cost of as much as $450 million, according to city staff.

Brampton Mayor Patrick Brown will be meeting with federal party leaders, later this month, in an attempt to find a prospective funding partner to propel the Main St. LRT project forward. As of right now, Brampton is examining options for a street level route or a line partly tunneled through the city’s downtown. The partially tunneled route is the preference for Mayor Brown, but the potential $1.7 billion cost is a significant obstacle. Convincing a prepared partner to fund the project will be essential for Brampton.

Liberal Leader Justin Trudeau often touts his party’s green platform, so it seems obvious that any government led by him should understand how important transit funding is for the future direction of places like Mississauga and Brampton, which are trying to overcome their sprawling, car dependent past.

Ameliorating rapid transit in Canada’s biggest cities was discussed at this past Sunday’s BCMC meeting. “Specifically, the step ...we’re trying to make as a country, particularly in our largest cities, when it comes to improvements — long overdue improvements — [is] to rapid transit,” Edmonton Mayor Don Iveson told The Pointer. “One of the things that we looked at was the polling data that shows that four out of five Canadians think public transit is a really important investment priority for all orders of government, and that the federal government plays a very strong role with its balance sheet coming to the table,” said Iveson, who chairs the mayors’ caucus.

One of the main issues discussed at the conference was FCM’s proposal, ahead of the October federal election, to extend the current 10-year federal transit plan, the Public Transit Infrastructure Program (PTIF), beyond the expiry year of 2027, “through a permanent federal funding mechanism for Canada’s transit systems,” a Sept. 8 press release stated.

“A number of the mayors were comparing notes on the projects that we’re building now, thanks to PTIF, but also the planning work and land acquisition work and urban planning and zoning work that we’re undertaking in anticipation of the construction in the decades to follow,” said Iveson. “The major transit projects in our largest cities really are almost [multi]generational in scope. And so, that’s where [there is] this well-understood need for long-term funding from all of the mayors, so that we can carry on our work and improve lives and commutes for Canadians, coast to coast.”

Iveson said the mayors’ caucus hopes to secure continued funding from 2027 to 2037-38. “That will give us another 10 years of certainty,” he noted. He said the funding for that timeframe works out to $34 billion, which amounts to 0.59 percent of the 2018 federal budget.

The FCM said the funds would be disbursed through two mechanisms: $30 billion over 10 years on an allocation basis, “distributed directly to transit agencies based 100 percent [on] ridership”; plus at least $4 billion over 10 years for a “merit-based component,” which would be available to transit systems of any proportion and size, “to support transformational projects, grow ridership and support rural mobility where an allocation formula does not fully meet local needs.” Cities would apply to the federal government to access such funds, FCM said.