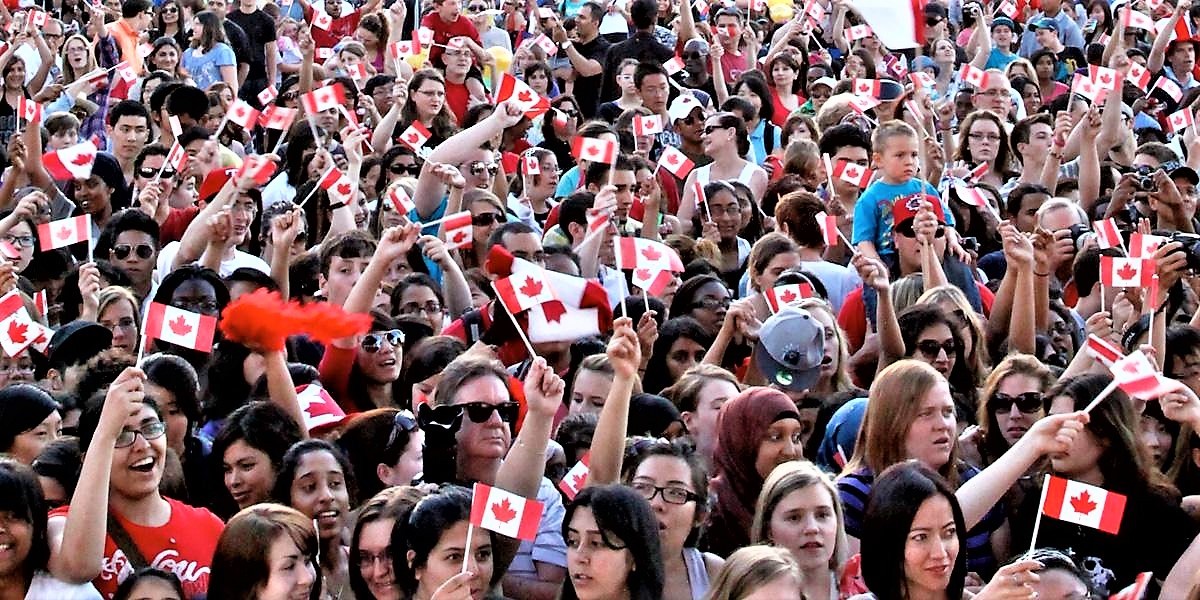 The Greater Toronto Area is home to 45 percent of Ontario’s population and welcomes 77 percent of immigrants coming to the province, a new report from the Conference Board of Canada finds.

The GTA greeted 106,000 immigrants last year, while the rest of Ontario took in 31,000 newcomers. “The GTA alone welcomes more immigrants annually than Quebec, the four Atlantic provinces, Manitoba and Saskatchewan” put together, says the report (read it here), titled “Immigration Beyond the GTA: Toward an Ontario Immigration Strategy.” The report argues that the burdens, but even more the benefits, of immigration should be more evenly spread around. 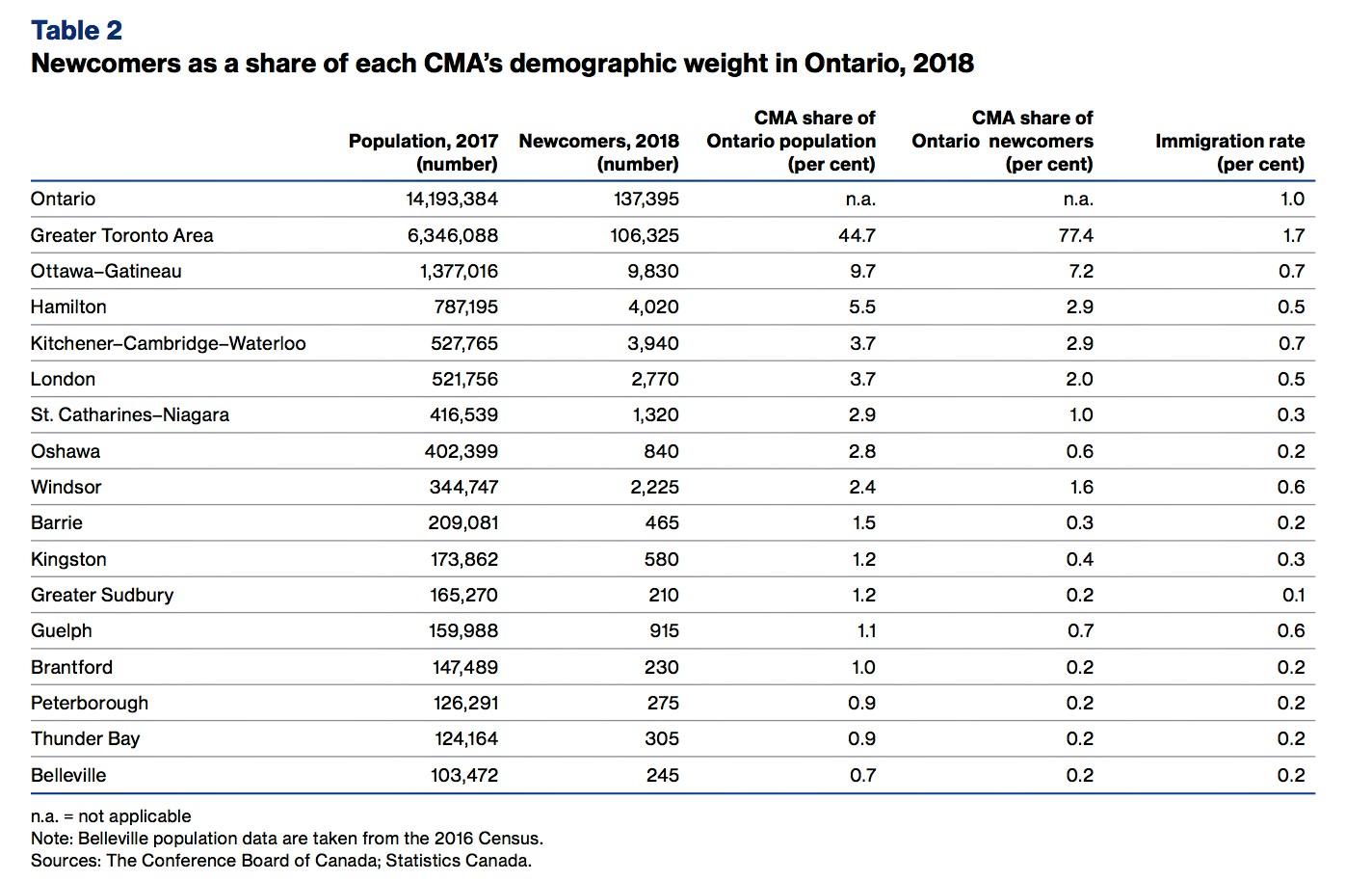 Why is the GTA such a compelling destination? The report lays out major factors such as jobs, community, settlement, supports, affordable and appropriate housing, transportation and education.

“The GTA is highly appealing to newcomers because it offers jobs in a diversity of sectors, as well as a variety of educational and leisure opportunities,” the report states. “It is also one of the world’s most multicultural regions, with immigrants comprising 46 per cent of its population — the highest share among all Canadian CMAs (Central Metropolitan Areas, census divisions of at least 100,000 people). Consequently, it has the most settlement and integration supports in the country, with some 90 immigrant-serving organizations.”

These service organizations assist “the human and social capital development” of newcomers and offer “guidance on how to navigate life in Canada,” the report says.

Kareem El-Assal, the researcher behind the report, expanded on why immigrants seem to be gravitating towards the GTA. “It has the biggest economy in Canada,” he told The Pointer. “While right now it’s facing challenges on affordable housing and the transportation front, it’s still fairly strong on the infrastructure side — especially when you compare it with smaller cities within Ontario. So it’s a snowball effect.”

Peel Region, El-Assal said, does fairly well on the major categories that make the GTA compelling (jobs, community, settlement, supports etc.) “Peel is strong in most facets. On the immigrant-serving front, there are so many different organizations within the region,” he said. “The other thing is, you can live in Peel and commute to downtown Toronto, and there’s more job opportunities.”

Mississauga Ward 9 Councillor Pat Saito noted the degree to which finding high-quality and secure accommodations within Peel is an issue. “Good, safe housing — I don’t think there is, for those who come without a lot of money. If they come with money, there’s no problem at all,” she said. “But housing is expensive. We have a huge waiting list for assisted housing in Peel. And that list keeps getting added to. And we’re not getting support from the other levels of government to try and get through that list.” 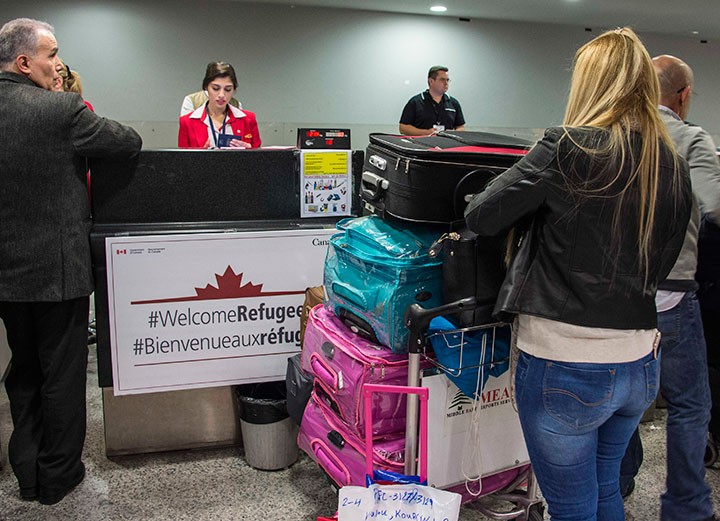 Refugees arrive at Pearson International Airport, located in Mississauga on the edge of Brampton

The federal government announced in an Aug. 23 news release that it will provide Peel with $2.2 million in response to the challenges the region has faced in providing temporary accommodation to asylum claimants over the past two years. Ottawa said the money will help the region “deliver effective interim housing solutions for asylum claimants seeking Canada’s protection, while all orders of government work together toward sustainable, long-term solutions.”

Within Mississauga’s Ward 5, employment opportunities seem present, but housing is an issue, Councillor Carolyn Parrish said. “We’re really short on housing,” she said, highlighting the Malton neighbourhood. Parrish said she’s trying to get the city to buy nine acres of employment lands and convert it to housing.

“That’s why you’re getting a lot of pushback in the Lakeview development. The developers want to build more density. The locals, who already live there, don’t want the density. Where are we going to put all these people? We’re going to have 48,000 new people coming in over the next couple of years. We have to have 48,000 accommodations.”

The report notes that immigration benefits Ontario by alleviating the economic pressures that come with a low birth rate, an aging population and, in some places, outmigration. It suggests that developing a strong strategy for spreading immigrant settlement more evenly around the province “is more important to the province than ever.”

Suggested measures include: creating an Ontario regional immigration strategy; refining the Ontario Immigrant Nominee program,  which ties expedited immigration to specific employment needs; marketing other population centres outside the GTA to help immigrants see the value in choosing other parts of the province; and building public awareness on the subject. It also suggests engaging with employers across the province to help them understand the value of hiring international talent and ease the path to doing so.

“The biggest takeaway, from my point of view, is that Ontario absolutely needs a strategy to promote the broader distribution of immigration across the province,” El-Assal told The Pointer. “If you look at what’s happened over the last 20 years, pretty much every city within the province has taken action to increase their immigration intake — recognizing that they need immigrants to improve their economic and fiscal standing. However, unfortunately, despite their laudable efforts, we continue to see the same trend, which is that nearly 80 percent of Ontario’s immigrants go to the GTA. So in spite of the effort of cities across the province, they haven’t been able to increase their immigrant intakes appreciably.”

The reason a strategy is needed is to get everyone concerned “working in the same direction, where they can establish targets, they can come up with a plan, and then every few years, they can review the results and, if necessary, they can adjust their strategy accordingly.”