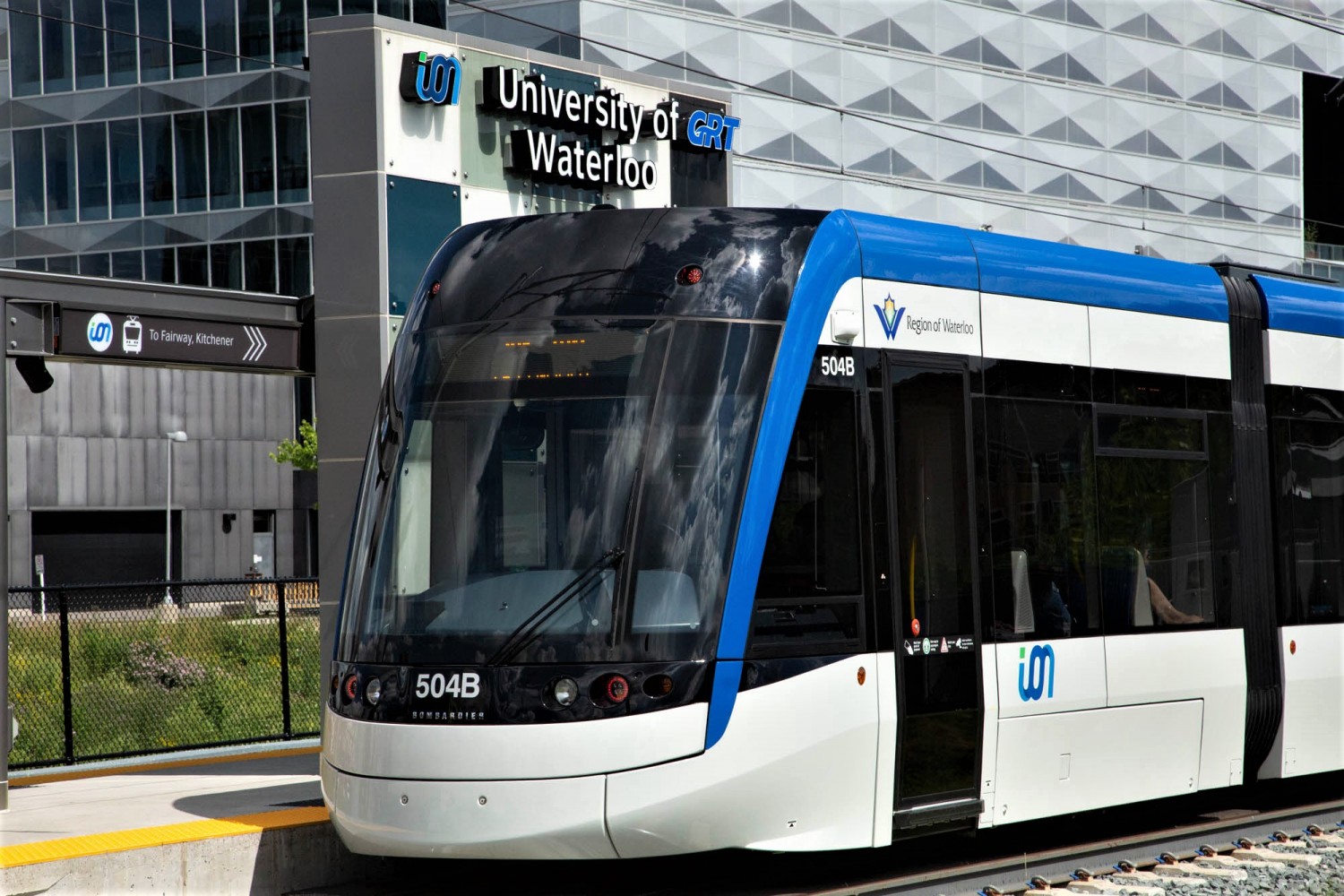 Part 1: Can Kitchener-Waterloo’s LRT serve as a template for Brampton?

It’s been a long day for a visibly tired Jeff Voskamp, and he can’t wait to end his Thursday afternoon and get home to see his family. The 55-year-old IT specialist for the University of Waterloo lives in Kitchener, the municipality inextricably married to Waterloo. He has a good deal of distance to cover on his commute home, but now he has a new, more convenient travel option.

“For me personally it is a lot more direct. I’m finding that for most of the places I have to go, there are fewer transfers,” Voskamp said of ION Rapid Transit, Kitchener-Waterloo’s experiment with light rail. “Parking is getting a little more difficult to find. So taking the train is just more convenient. I can sit down and catch up on my reading, do my email and stuff like that, especially since there is now WiFi on the train.” 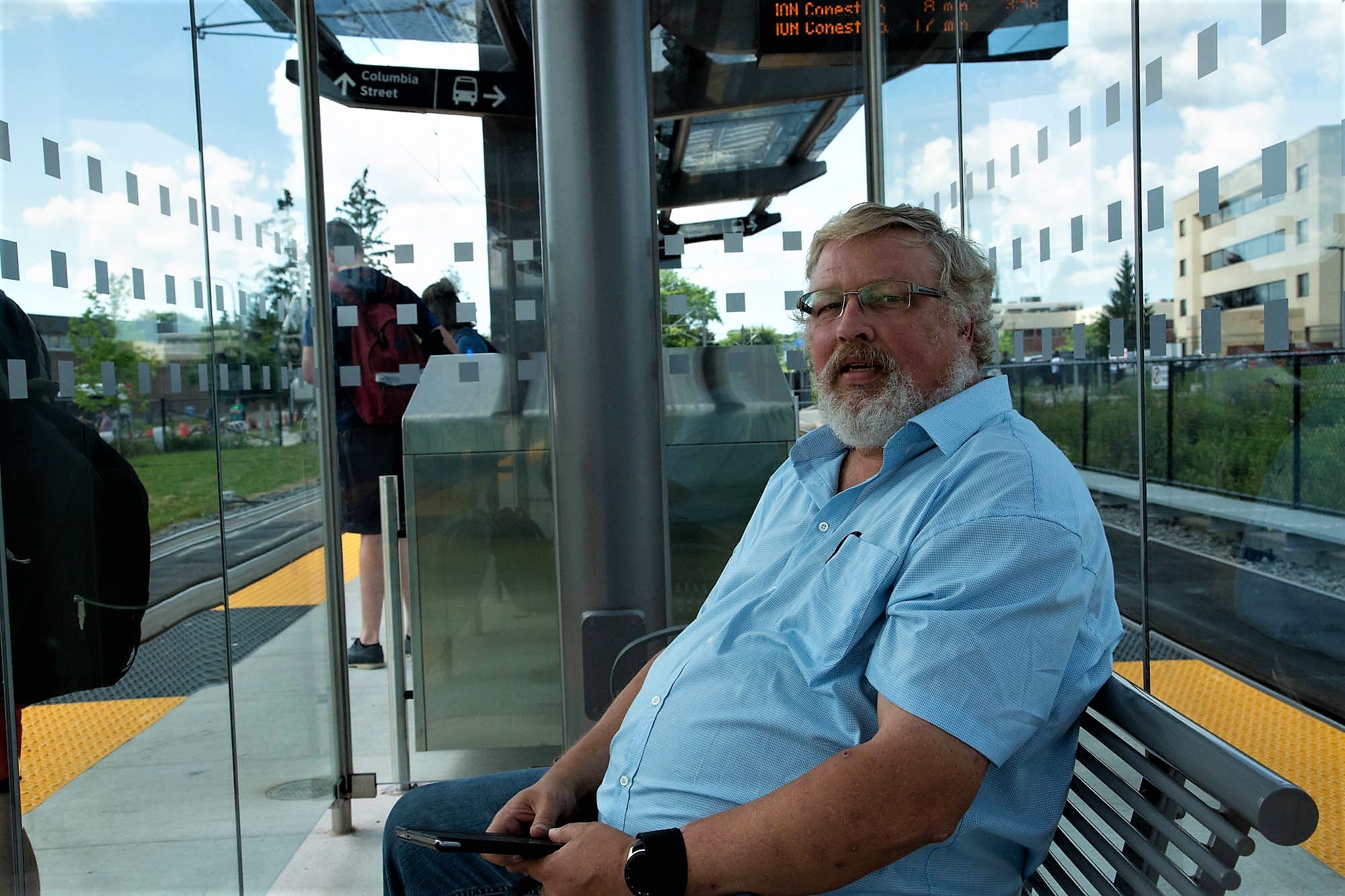 Brampton’s push for a Main Street LRT alignment is back on council’s lips. This even though many believed the project was dead in the water after an infamous vote in 2015 rejected the route. As was the case four years ago, the configuration of the future LRT beyond its settled and funded alignment on Hurontario Street through Mississauga has once again divided councillors.

Mayor Patrick Brown is pushing for a tunnelling option on Main Street with a potential price tag of $1.7 billion. Wards 1 and 5 Councillor Paul Vicente is at odds with Brown over this question as he is pushing for the cheaper surface route, leading the two to trade barbs over the question back in April.

This is the latest episode in a decade-long fight to get higher-order transit in the city, a battle that has gone from conception to political purgatory to resurrection. For Bramptonians, that April meeting was more of the same: entrenched disagreement over minutiae, stifling progress. But the successful realization of an LRT dream in Kitchener-Waterloo, which took 17 years, could serve as a template if the project were to get the green light in this city. The long story of the ION was a winding road often paralleling Brampton’s. 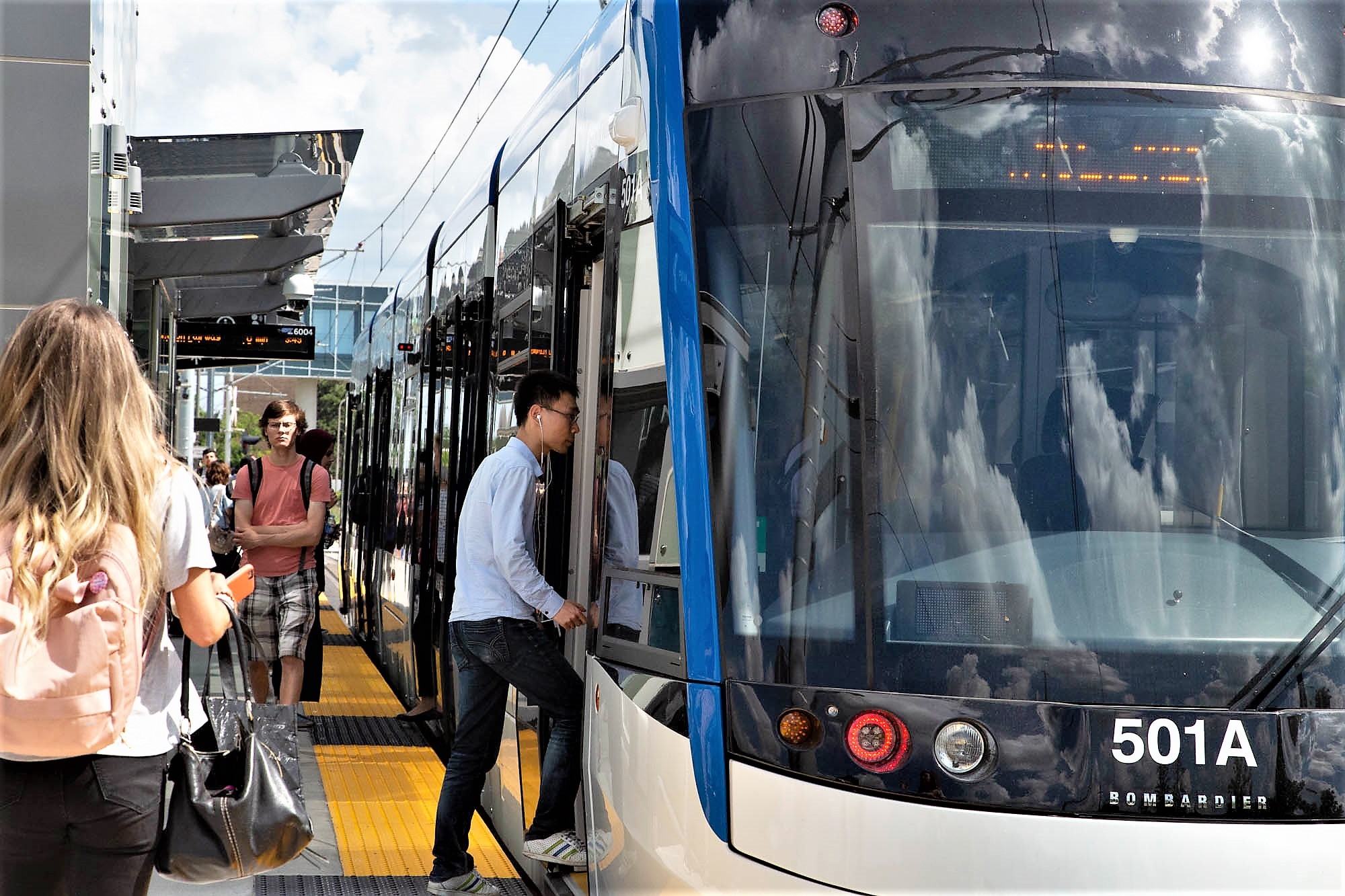 At the time of The Pointer’s late-June interview with Voskamp, the ION had been open for about a week and a half. To get to that point, Region of Waterloo councillors, staff and residents contended with a long saga of delays, detractors and aligning of stars to see that project through.

The initial idea for higher-order transit was first proposed at Waterloo Region in 2002. Back then, staff and councillors mused about what the preferred mode would be.

“BRT (Bus Rapid Transit), light rail were just two of many. So if you look back through our studies, I think at the time there were 10-plus different ways,” Thomas Schmidt, commissioner of transportation for the region, told The Pointer. 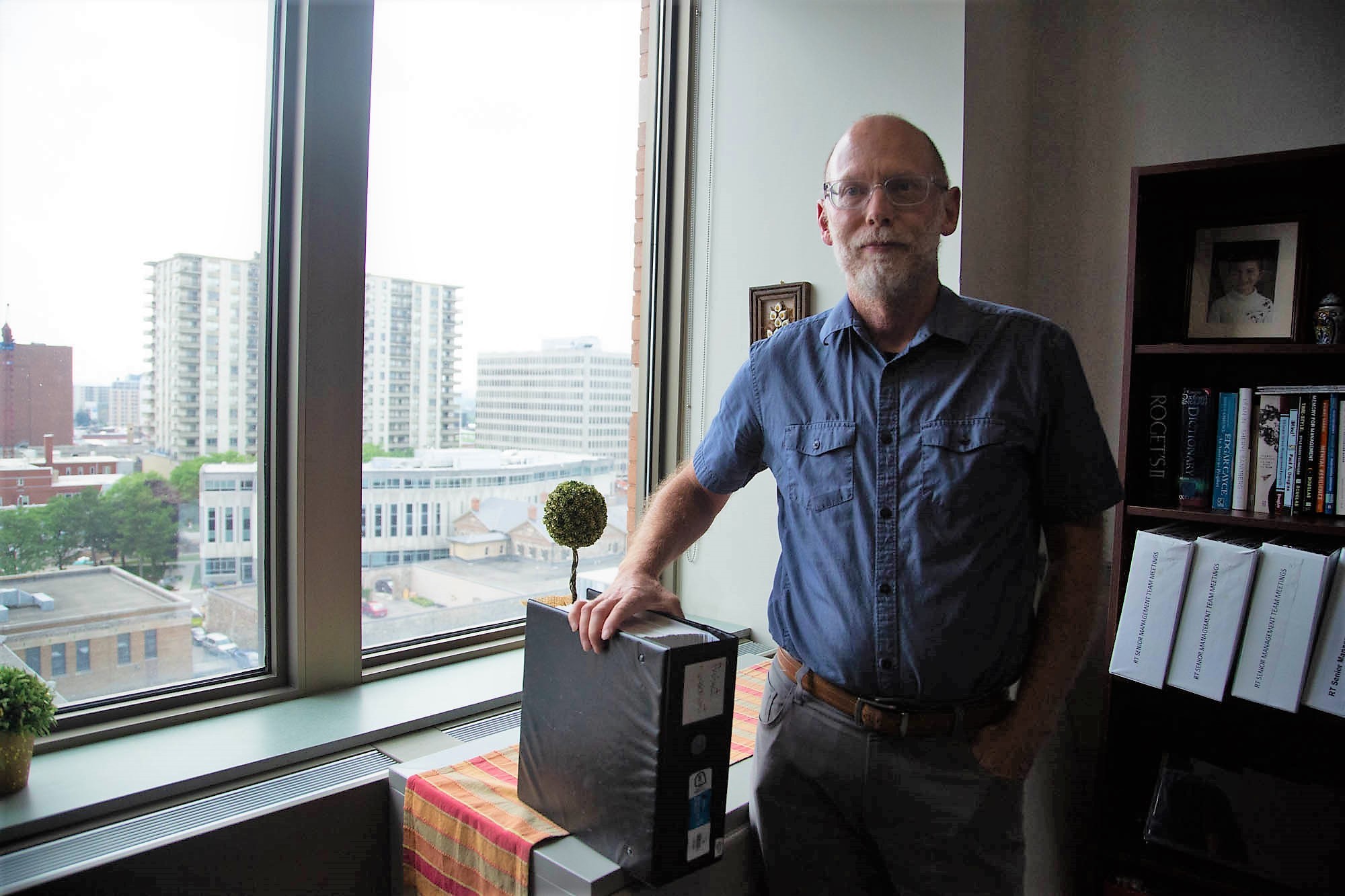 “We had people who wanted monorails, subways — all kinds of different ideas people had on what you should do. Subways, [the big factor] largely is cost. At the end of the day, they are extremely expensive; you have to tunnel. In some cases, you can dig and bury, but then the construction impacts are huge …  The impact on the community is huge.”

They believed placing the route along King Street, the central spine of the dual cities, would be the right way to go. This route, stretching from Conestoga Mall in Waterloo to downtown Cambridge, is called the Central Transit Corridor. The ION track does not stretch quite as far as Cambridge yet; it terminates at Fairview Park Mall in Kitchener. The three Waterloo Region cities won’t be united along the CTC until phase two of the project is completed. 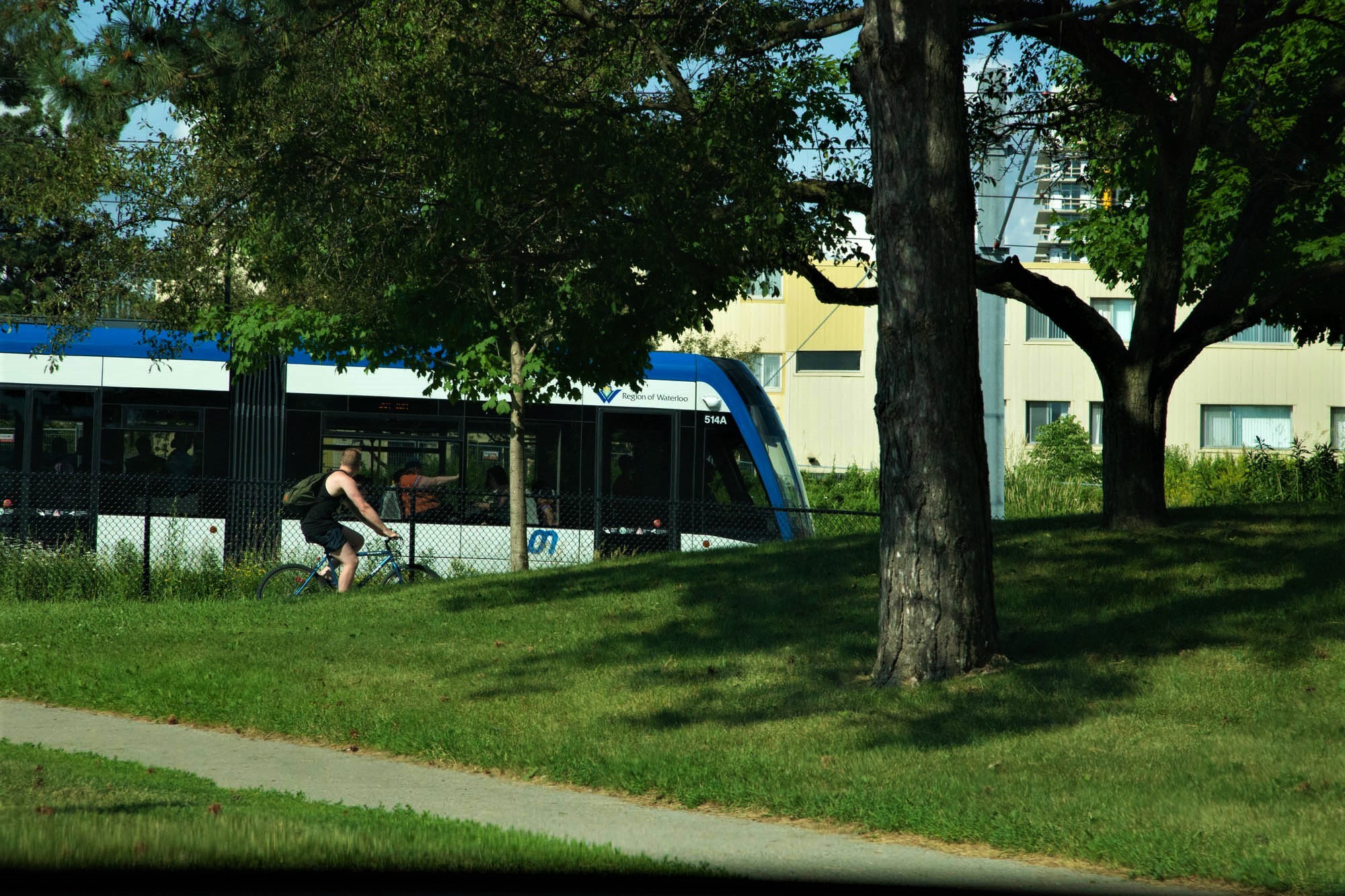 In 2006, the Dalton McGuinty government mandated that the region, and other municipalities, plan for a major increase in population in its Places to Grow master plan for growth in the Golden Horseshoe. Population growth-related realities meant cities would be contending with increased congestion and housing demand, leading to a push for intensification and protection of sensitive ecosystems.

“We looked at our ridership and realized that, essentially, if we built a bus rapid transit system, we would probably be reaching its peak capacity about 10 to 15 years after it was done,” Schmidt said.

Regional Councillor Tom Galloway, chair of the Planning and Works Committee, says there was a real need to preserve farmland in the area, which spurred on a need for more compact and efficient development. 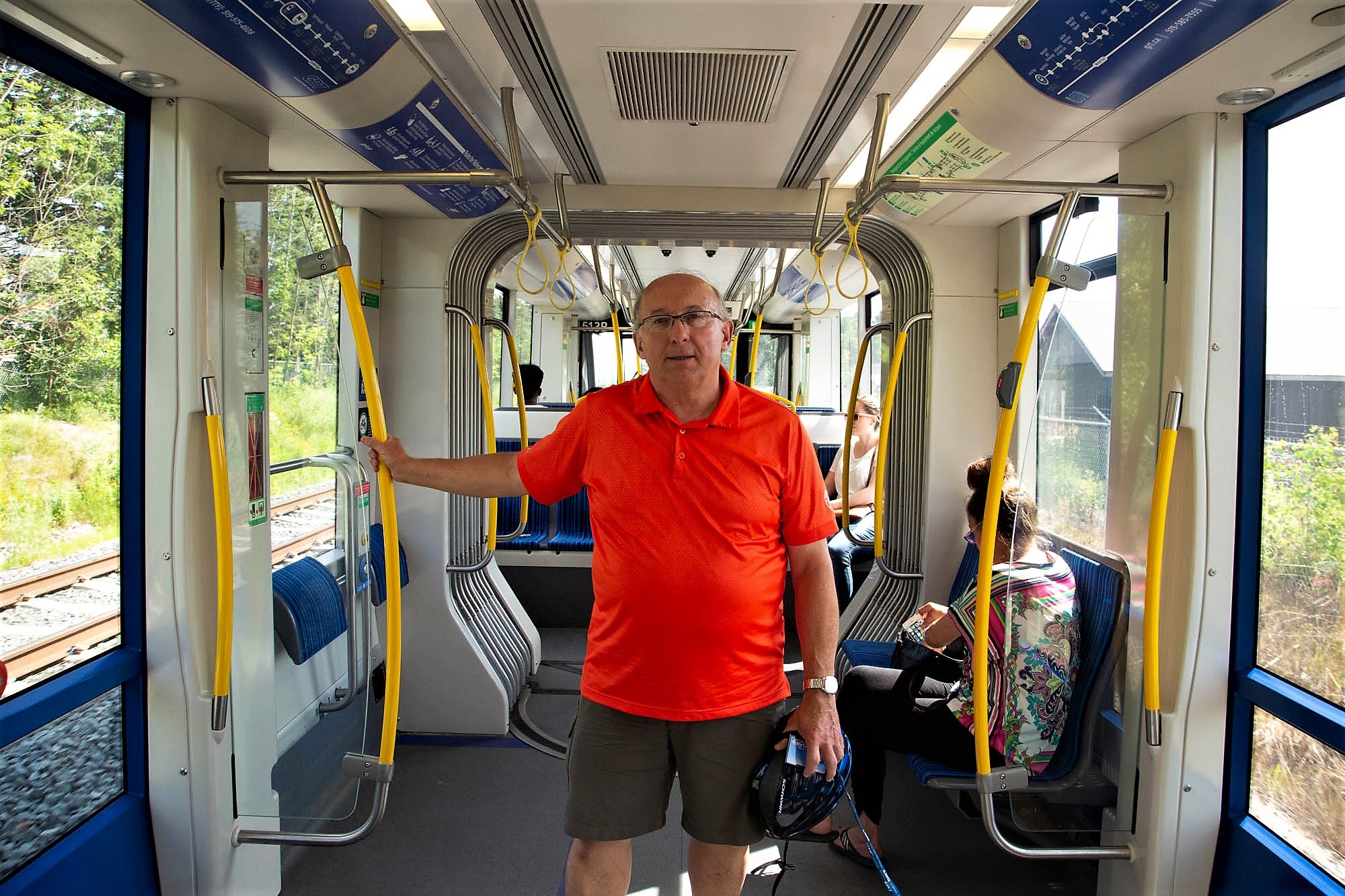 “It’s more of a planning tool than a transportation device … This is to save farmland, this is to turn our focus inward and upward,” he added.

It certainly has done that for the city. Between 1995 and 2002, there were roughly $937 million worth of development applications along the corridor. That total investment has, since 2011, jumped up to $3.2 billion. The goal of saving farmland by reducing sprawl has also been realized.

In 2003, only 15 percent of new development was in built-up areas, a far cry from the 49 percent as of 2015. The shift from low-density housing is evident in the types of housing stock being built as well. In 2002, more than three-quarters of all development was single-family homes, whereas high-density residential construction — apartments, townhouses and condominiums — made up less than 25 percent. Those proportions have since completely flipped. As of 2015, high-density homes are the priority, as just under 70 percent of housing units consist of highrise developments and only about a third are single-family homes. 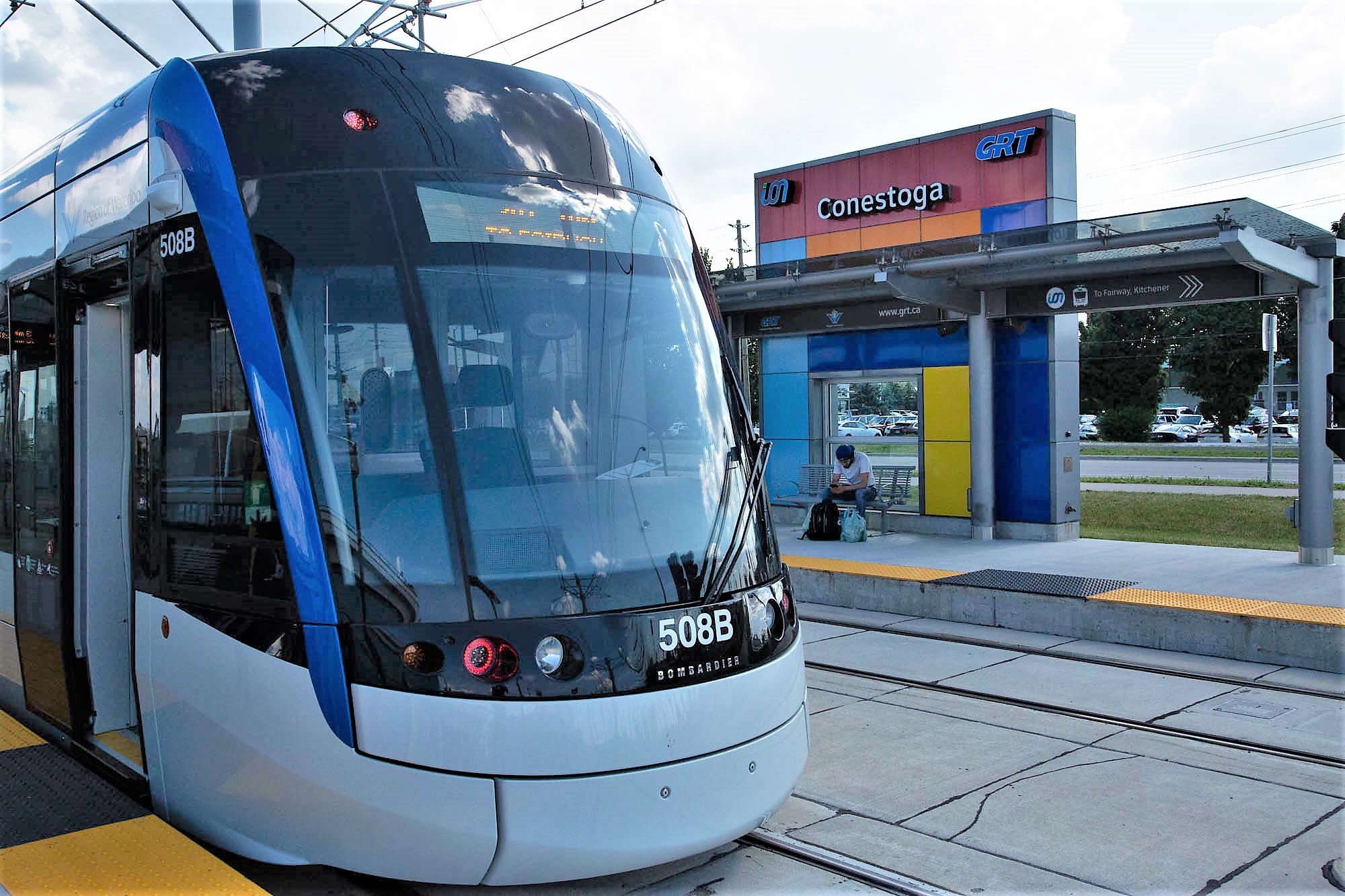 “We’re starting to get a skyline now,” commissioner of planning and development Rod Regier said gleefully. “Just in the last six months, the City of Kitchener has issued building permits for 18 highrise projects, about 2,800 residential units and about 400,000 square feet or so of commercial development. There are a variety of factors involved with that, but certainly that development [and] that intensification would not be happening without the LRT.”

The ION has acted as a great equalizer for all age groups as well. At any given time, one can find high schoolers rubbing elbows with nonagenarians on the trains. “My mother lives in this building that we are passing; she’s 94, she’s in the retirement home here. Her room overlooks the ION and she is going to be a regular ION user,” Councillor Galloway said, pointing out the Terrace on the Square retirement home, which is a five-minute walk from Allen station on the LRT route.

“We were told by the experts and the people in Portland, Ore., who have experience with both (bus and train) types of systems that you’ll get 50 percent more riders on a train, ostensibly because of the cool factor,” Galloway commented, reflecting on the different types of people who use trains. Portland served as a template for KW’s plans. No doubt the ION will go onto act as an example to other cities pursuing higher-order transit.

Anika Abdullah relies on an electric wheelchair to make her way around the University of Waterloo, where she studies, coincidently, urban planning. She decided she liked the ION, even only having used it three times, because “it’s a safe way to go around and you are not dealing with as much traffic as if you’re in a bus.”

She does feel that it is “still kinda slow” and that some kinks need to be worked out. As a young urban planning student, she welcomes the LRT because she sees a lot of newcomers moving into the city from Toronto who have used the TTC and have ideas of how transit should be. “We kind of want more of that public transit we’re used to, especially that system we’re more used to in Toronto.” 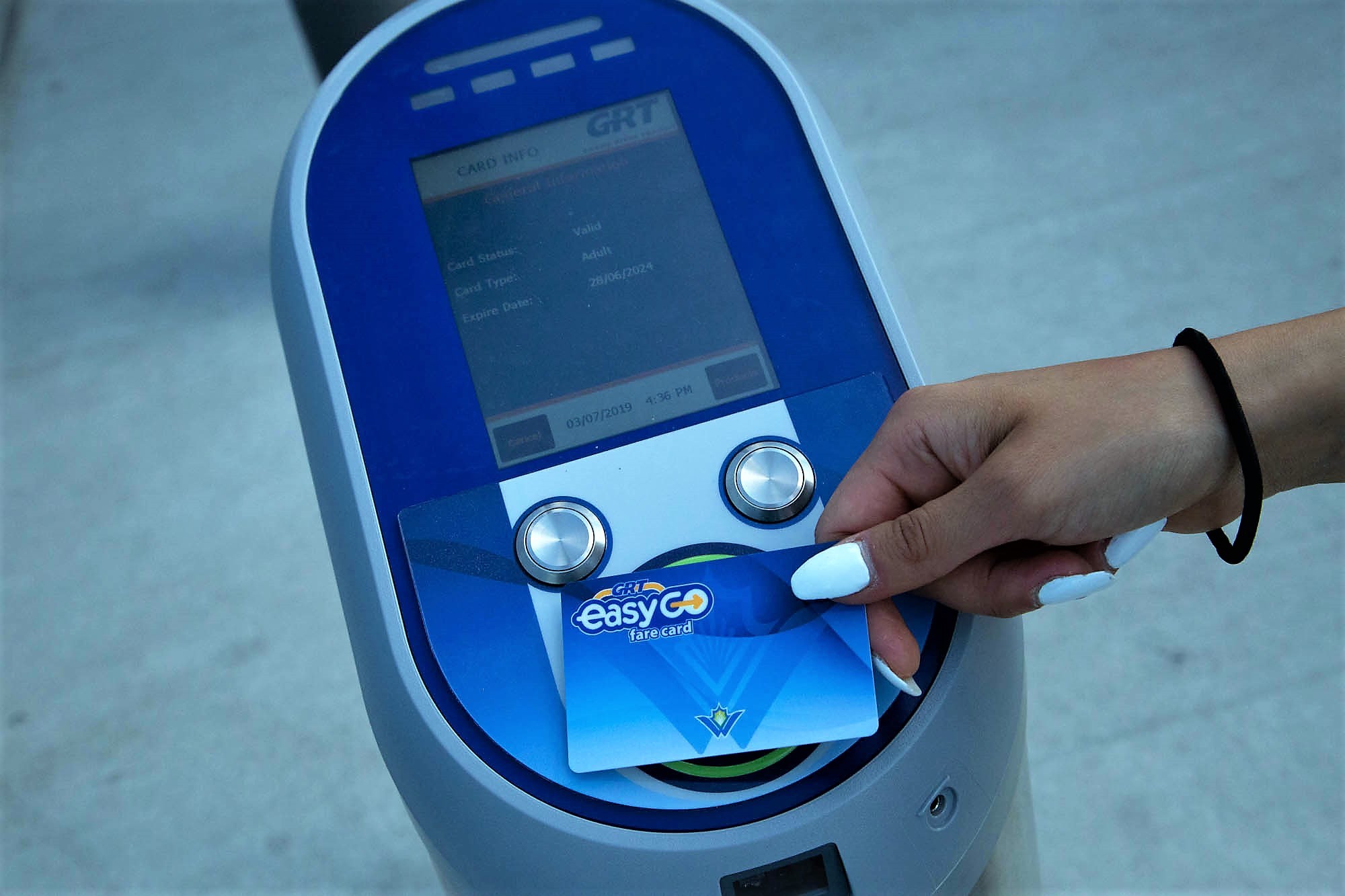 In 2011, with $300 million from the province, $265 million from the federal government of PM Stephen Harper—both approved the previous year—council decided to move ahead with the LRT. The province officially gave the project a green light in May 2012. In 2013, the project was named the ION Rapid Transit, and Waterloo Region partnered with Bombardier to purchase 14 of their Flexity Freedom vehicles, similar in many ways to Toronto’s new Flexity Outlook streetcars. The region signed an almost $530 million contract the following year with private company GrandLinq to design, build and operate phase one.

Almost immediately, though, the project was marred by delays. About 1,000 workers at Bombardier’s Thunder Bay plant went on strike in 2014, which the company blamed for its inability to deliver the vehicles on time.

Two years later, city crews discovered two historic corduroy roads underneath the paved ones. A corduroy road was a primitive form of paving over swampy earth, on which logs were placed perpendicular to the road, something like the ties on a train track but closer together. Schmidt estimates the discovery delayed construction by six weeks.

“I think for the community it was a bit of an exciting event, to see that we’ve been here for 100-plus years,” Schmidt said.

The first of the vehicles arrived in Kitchener-Waterloo in February 2017, and the company promised to have all 14 delivered by October of that year. But only four were delivered by January 2018, and one had to be sent back to Bombardier as it was delivered incomplete. The final two trains arrived in December, more than a year behind schedule. The region, reluctant to provide an exact date, promised to have the ION open for business by spring 2019. They delivered on that promise on June 21, 84 minutes before the official start of summer. 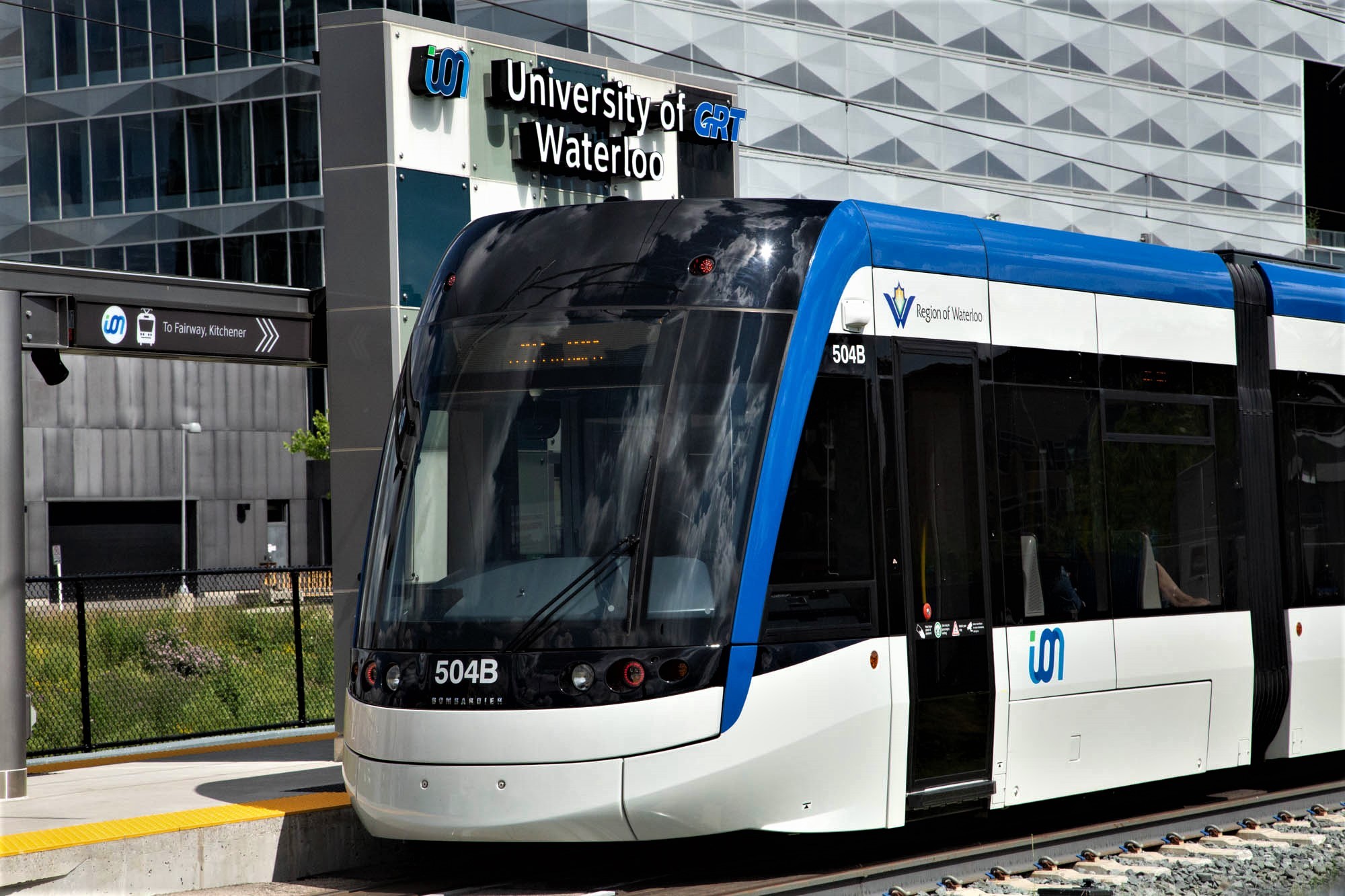 During this time, a number of detractors hoping to kill the project came out of the woodwork. The owner of Jay Fencing, Jay Aissa, launched a petition in 2013 imploring the region to scrap the LRT, citing the $800-million price tag and the potential disruption to surrounding businesses during construction.

In 2017, it was revealed by CTV that 21 businesses had filed lawsuits against the region for disruption to their businesses. This and the clamour to preserve the heritage character of some neighbourhoods — an argument all too familiar to Bramptonians — bogged down construction of the LRT. Aissa ran for regional chair twice, in 2014 and 2018, on a promise to kill the LRT project.

“We had a lot of communication with business owners and homeowners who were affected by construction. But I think we could have done a better job in terms of trying to keep them informed. It is very difficult sometimes,” Councillor Galloway said.

The Brampton LRT still has a lot of detractors as well. Critics have repeatedly pointed to the Main Street South Heritage District, an area where homes from the 1800s add to the charm of the neighbourhood, as being incongruous with an ultra-modern 21st-century mode of transportation. Concerns over foundations and their ability to handle the rumble of a train were also brought up. Yet European cities with much older buildings, such as London and Paris, routinely use LRTs and more robust transportation modes without significant issues with their buildings.