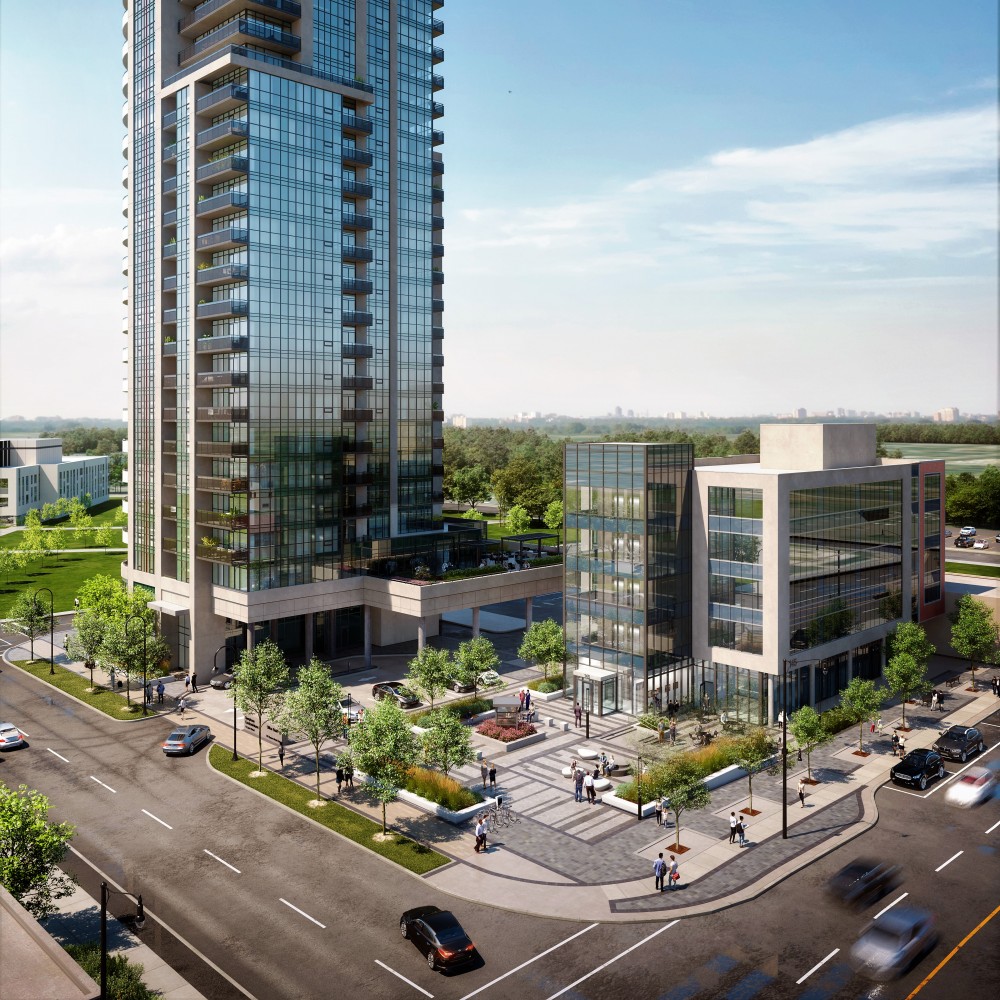 Everyone loves a courtroom drama: conflicting testimony, lawyerly accusations, a ribald cast of witnesses, a compelling plot twist and a surprising judgment.

All those were on display last summer as Inzola Group v. The City of Brampton played itself out in an Orangeville courthouse before Justice John Sproat.

The stakes were high: Inzola (the plaintiff) filed a $28.5 million civil lawsuit in 2011 charging the city with “bias” and “unfairness” in the disqualification of its bid to build the massive $205 million South West Quadrant project (city hall expansion) on George Street. 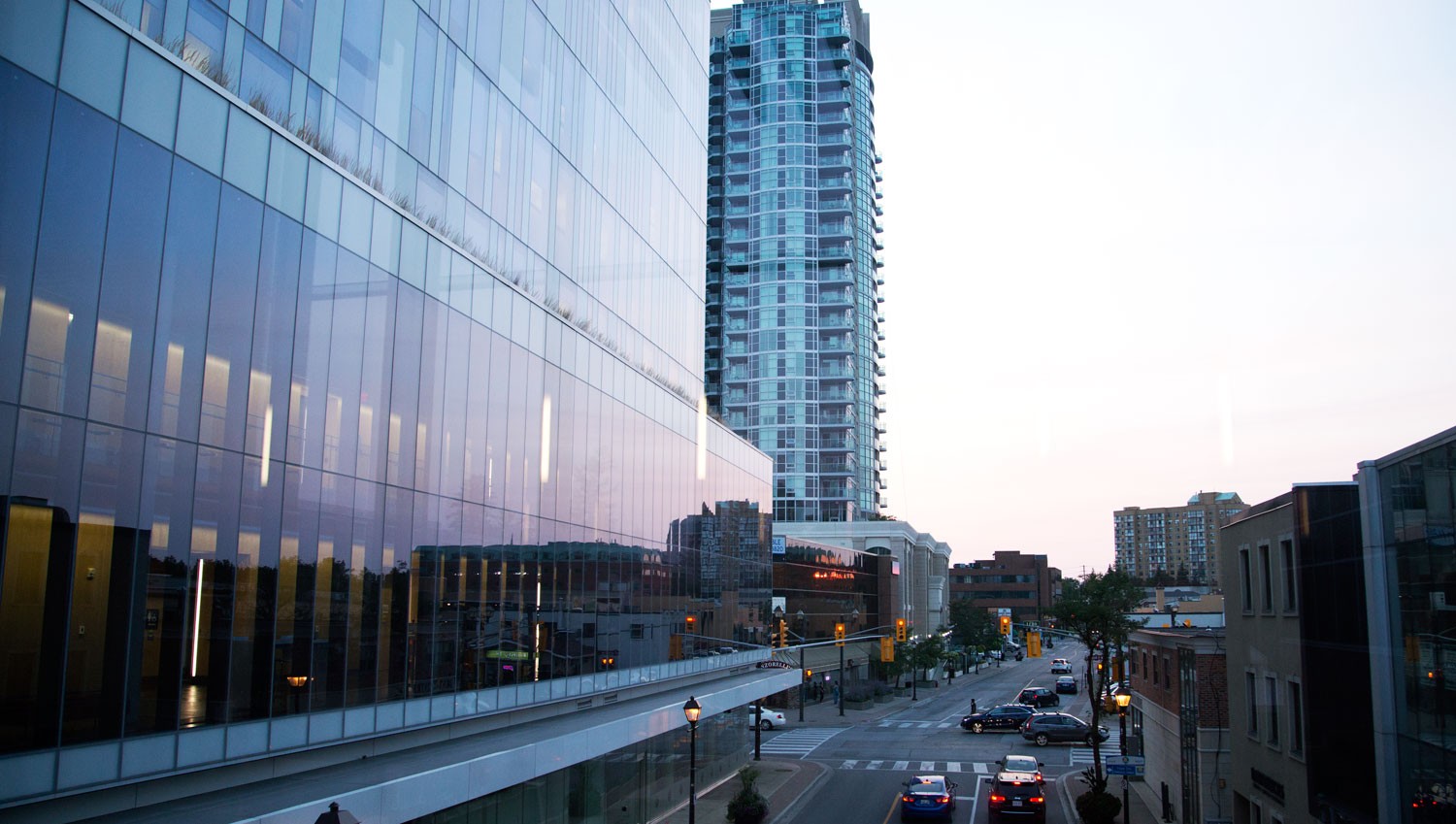 The city denied the allegations and claimed Inzola violated the RFP (Request for Proposal) rules – and it later awarded the project to Dominus Construction.

Many were called to either support or debunk Inzola’s claim.

The plot twist was captured perfectly in a compelling 2011 Toronto Star story written at the time the suit was filed. It was topped off with this memorable headline: “He built city hall. Now he’s suing it.”

Yes, John Cutruzzola, founder of Inzola and the man most responsible for building the original city hall in the late 1980s and early 1990s, was ousted from adding the expansion project on George Street to his portfolio. 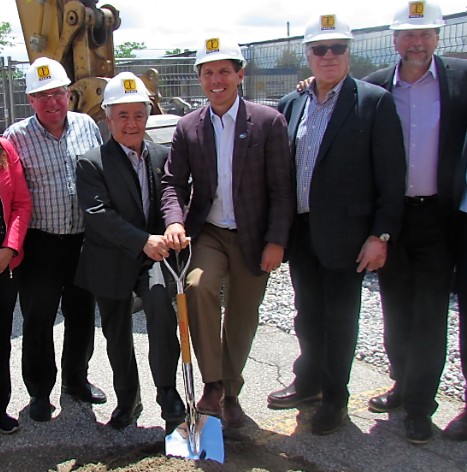 The court documents filed in the 2011 case claimed the city failed to observe basic requirements of “fairness, transparency and public accountability”, and that, as a result of Inzola’s disqualification, the city caused “damage to Inzola” and was wasting “tens of millions of taxpayers’ dollars” to build a significantly more expensive project that delivers less to Brampton’s residents.

To add a little more spice to the plot, four years before filing suit, Cutruzzola was named Brampton’s Citizen of the Year. In the years before that, he was also lauded by his adopted city as a tireless philanthropist, and a leader in the arts community.

The court proceedings were captured in a riveting multi-part series in The Pointer, which helped draw a picture for those who weren't there to see and hear the searing, complex, and back-and-forth testimony. The dramatic and somewhat controversial decision came down in January of this year: Sproat ruled in favour of the city, dismissing the Inzola lawsuit.

His 92-page judgment didn’t find bias on the part of the ex-mayor or city manager, or members of the selection committee – made up of senior staff. The judge rejected Inzola’s claims that it would have had the best chance at winning the contract had it been allowed to complete the bidding process.

But the three-month trial didn’t end there. Inzola filed an appeal just moments before the 4 p.m. Feb. 11 deadline.

This eight-year saga promises another chapter. But surely the once solid relationship between Cutruzzola and the City of Brampton is now kaput, right?

Not exactly. If all is fair in love and war, it’s even truer in business. Builders and cities can’t afford to hold grudges.

It's high noon on Tuesday, on a partly sunny, but windswept afternoon. The groundbreaking ceremony for Symphony Condominiums (145 Queen Street) is being held at the construction site, and this $100 million mixed-use project promises to be a modern-day example, an add-on to the city’s small but growing stock of high-rise residential buildings. 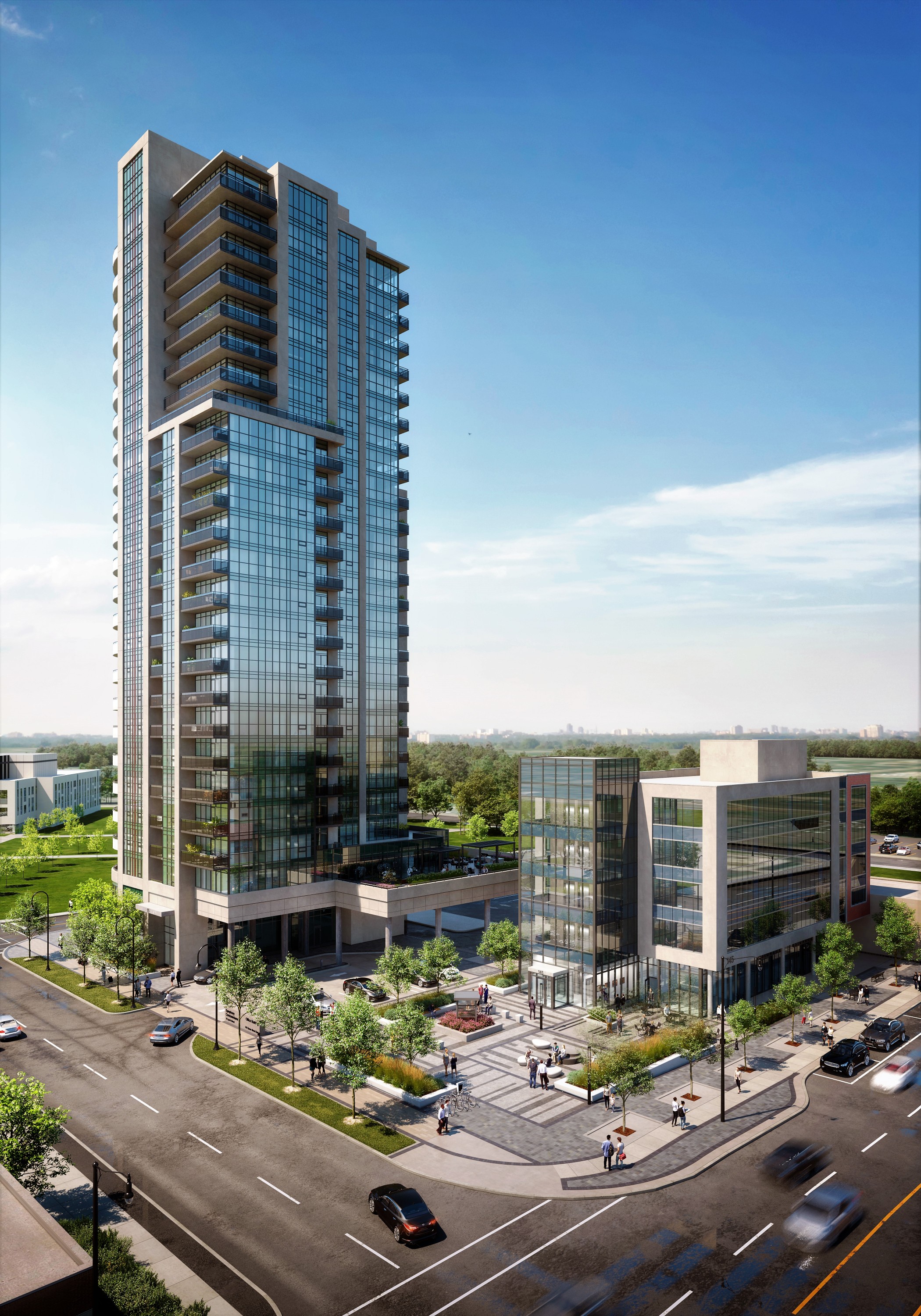 The Symphony condo and its office building on the right

It’s the newest project in Brampton by Inzola Group, which also built The Belvedere and Park Place, among others. Symphony is located kitty corner to The Peel Memorial Centre for Integrated Health and Wellness, and represents another step-up in modern private-sector development, which seems to have picked up pace since Fennell’s departure after more than two decades of focus on sprawling subdivision construction by favoured builders who created a donut-style city with large family homes ringing the edges and little activity in the city-centre.

This project, which will take over two years to build, wouldn’t arise without the full backing of a determined team from the planning and building department of the city. The guest list at the groundbreaking reflects those who have contributed mightily to the project: friends, family and executives from Inzola, and a nice contingent of politicos and staffers from the City of Brampton. Mayor Patrick Brown was one of the keynote speakers.

The kumbaya between the Inzola Group and the city was palpable. Brown was effusive in his praise of Cutruzzola and his team. He called the company founder one of the city’s hometown gems, a living and breathing embodiment of everything that is good and positive about Brampton. He lauded Inzola for “raising the game” in terms of development in the city, and this project will challenge others to bring even more of this type of building to a community thirsting for it. Brown said Symphony Condos' cranes and bulldozers will be a catalyst for jobs and spin-off businesses.

In a one-on-one with The Pointer afterwards, he also pointed out the six years it took from inception (2015) to the projected final build is double the time he wants to see projects come to fruition. He deftly laid out his plan to attract new business to the city in his inaugural address, and cutting down on the red tape inside city hall was one of the fundamental building-blocks for growth and investment.

His words were echoed by the local councillor Jeff Bowman in his own presentation Tuesday, and rehashed later by Councillor Doug Whillans, and Paul Aldunate, formerly with the city’s planning office. He worked on the project when it was first conceived, and is now expeditor of Economic Development and Culture.

He sees plenty of symmetry between builders putting up structures like Symphony and what the EDO wants to accomplish in Brampton as a place to be over the next few years.

Cutruzzola, a noted painter and enthusiastic opera singer, was responsible for naming the project, and he didn’t hesitate in extending the musical metaphor for all it’s worth when he was interviewed afterwards. He called the project “note-perfect.” He added that any world-class symphony needs a coming together of instruments, players, and maestro, and it can only happen if “everyone is working in harmony.”

This, he said, described Symphony. It drew together investment money, city staff, and Inzola’s team of expert builders, and consultants.

There was no mention of the ongoing multi-million civil lawsuit that is still stuck in the court system.

The multi-storey residence market is in the ascendency in Brampton, and two other proposed projects are now in the pipeline: Rose Gardens Residence (122-130 Main St., just north of the CN railway line), and the Dominion Skate Buildings (two high-rises at 45 Railroad St.). A public presentation was recently hosted recently by developer RioCan that laid out a futuristic mixed-used project in the Shoppers World plaza. It will include residential, retail and office development, and will hopefully act as a centrepiece when the Hurontario LRT line stops at the Gateway terminal there. Word that developer Morguard is also planning a massive re-doing of Bramalea City Centre into a more integrated residential, work, and retail project, was discussed by some of the builders at the Symphony Condo opening.

A towering three-structure, 998-unit high-rise project has also been proposed by Weston Consulting that would feature 30, 32 and 46-storey buildings at 253 Queen Street East, between Kennedy and Rutherford Roads. The largest of the three towers would become the tallest structure in the city and the location of the proposed development is along the corridor that stretches west near McLaughlin Road and east past the 410 Highway, identified by the province as Brampton’s future urban growth area where much higher residential and employment density needs to be accommodated for future population growth and rapid transit built to move people through the area. 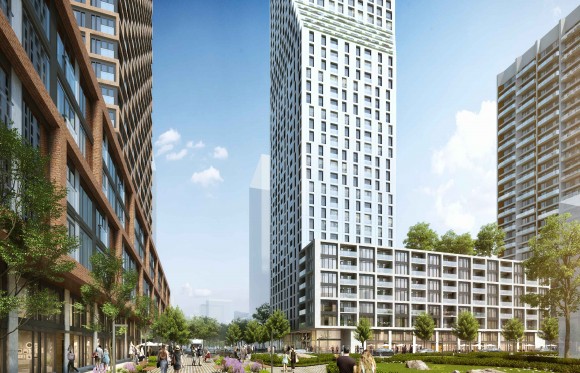 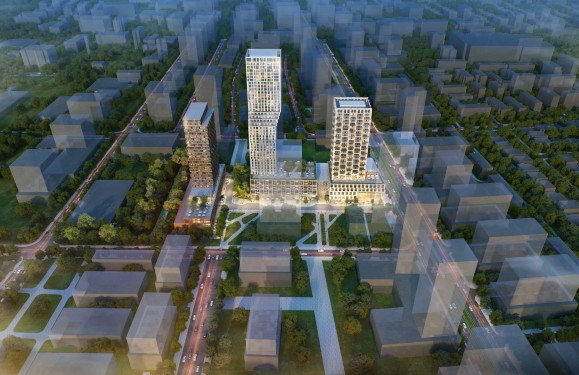 The city recently passed legislation that will eliminate development charges for office building that pushes beyond 50,000 square feet. While Symphony’s 34,000 doesn’t quite meet that standard, other exemptions it does qualify for and the new development charge exception will hopefully re-right the bad land-use mix that has stymied the city over the years, said Bowman. Single-family home development makes up the lion’s share of the city’s property tax base – outstripping office and industrial, and puts a real governor on the city’s ability to enrich its coffers. Other cities with healthy tax revenue models have an opposite balance compared to Brampton, with more lucrative commercial properties making up the majority of property tax revenues. The warped planning here was a hallmark of the subdivision developer-friendly regimes of former mayor Peter Robertson and Fennell, but it appears the trend began to change when she was ousted from office in 2014 with only 12 percent support at the ballot box.

Brown will have to decide if he wants to play up to the developers currently lobbying to build more sprawl and pushing the proposed GTA West Highway, which the mayor has said he supports. Or will he realize that more subdivisions on land bought long ago by developers along the proposed new highway, which the previous provincial government scrapped because of its bad land-use and planning principles, goes against everything he claims to support under the city’s 2040 Vision strategy to turn Brampton into a modern, urban city, while attracting employers and residents who want a much more compact environment with transit, walkability and plenty of nearby amenities?

The 186 suites at Symphony will come in all sizes and feature an “urban beat.” The glossy marketing magazine that was handed out at the groundbreaking calls the building a modern blend of natural and urban living, and a “work of art.”

Brown says having local investment like the Inzola team continue to commit to the city’s build-out is a boon, and it is just one component of a “new direction” for the city that he and council are pushing. He thinks the plans to put shovels in the ground and see Symphony built, took “way too long” and he vowed to find ways to “cut that in half.”

Cutruzzola agreed. “We as a community can decide what we want to do,” he said.

The $100 million project is a good start. Located right in front of the $350 million Peel Memorial Wellness Centre, both are seen as magnets to attract more people, jobs and spin-off businesses to this part of Brampton. 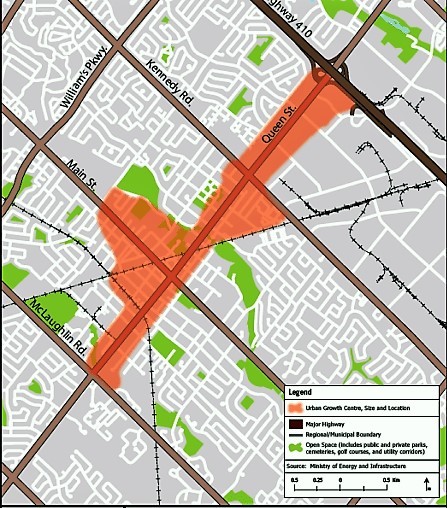 Brampton's "Urban Growth Centre" as dedicated by the province

Cutruzzola said the office component of Symphony will continue a momentum in the building world to give customers what they want: a work-life balance. He foresees the offices filled with highly trained professionals who will both work and reside there. The buildings will offer a medley of luxuries, and perhaps most importantly, will be located tight to the downtown core and Gage Park, Garden Square, the Rose Theatre, the Farmers’ Market, and the Etobicoke Creek trail system.

If you’re situated high enough in the condo, you will be able to see the beautiful clock tower Inzola built at the original city hall, and further beyond that, the city hall expansion project constructed by Dominus on George Street, and still at the centre of so much ongoing controversy.

While the first building raised the profile of Inzola as a made-in-Brampton success story, the other led to an eight-year squabble that continues to this day.

But that discord comes from another political era, and Brown is eager to see the city ride a new wave of development – driven by made-in-Brampton success stories like Inzola.

Cutruzzola said projects like Symphony will mean more tax assessment for the city, and eventually add real heft to its small office inventory. He hopes it will attract even more first-class development to the city-centre in the very near future.

This, of course, is much music to Brown’s ears.