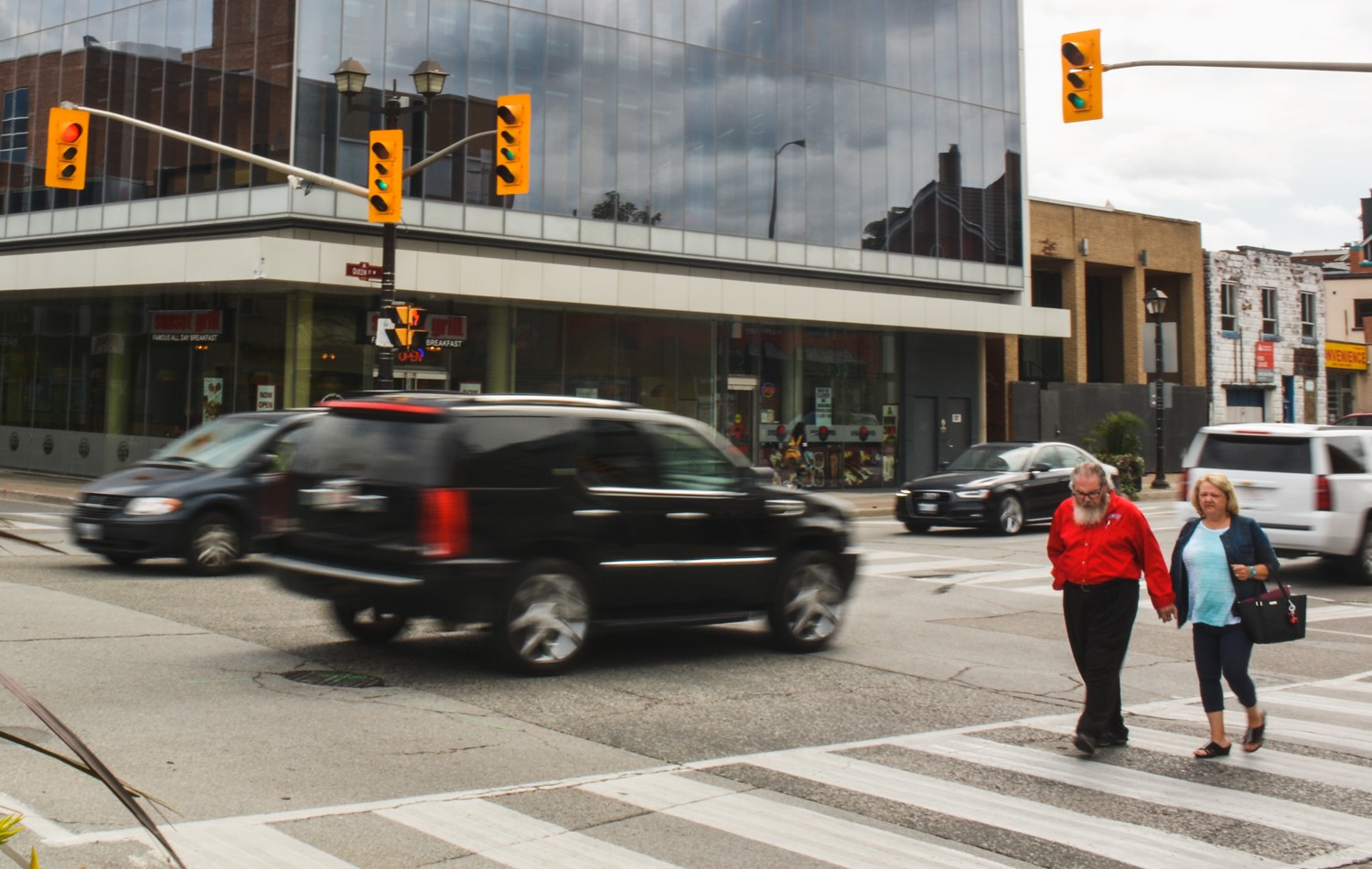 Brampton adopts Vision Zero, an ambitious plan to save the hundreds of pedestrians who are struck on city streets every year

Vision Zero — a plan to end pedestrian deaths on the streets pioneered in Sweden more than 20 years ago — has arrived in car-centric Brampton, where hundreds of pedestrians are being struck every year. City Council, with little discussion, passed a motion Wednesday to adopt the aspirational principles of the global Vision Zero framework, which says that “no loss of life is acceptable.”

The principles involve various measures to reduce the danger to pedestrians, mainly through redesigning roads to slow down traffic and provide better sightlines for people on foot through better lighting and design of sidewalks. The aim is to eventually bring the number of pedestrian road fatalities down to zero.

Statistics suggest what a mammoth task that will be. According to Peel police, in 2018, 342 pedestrians across the region had been struck by vehicles by October, with six of those incidents turning fatal. In the years before that, the number of pedestrians struck exceeded 600 people each year: 619 were hit in 2017, 698 in 2016 and 633 in 2015. Pedestrian deaths, for the most part, stayed in the double digits. Thirteen pedestrians were killed in both 2015 and 2016, and ten were killed in 2017.

Councillor Paul Vicente suggested one place where the plan can start. “Both myself, Councillor Santos and the Councillors from Wards 2 and 6 (Doug Whillans and Michael Palleschi) were briefed just recently on work being done on the Bovaird corridor, and the corridor requires some updates. Part of that work is now going to encompass principles for Vision Zero to make the intersection safer, to reduce the chances of accidents on turns and traffic lights,” he said Wednesday. 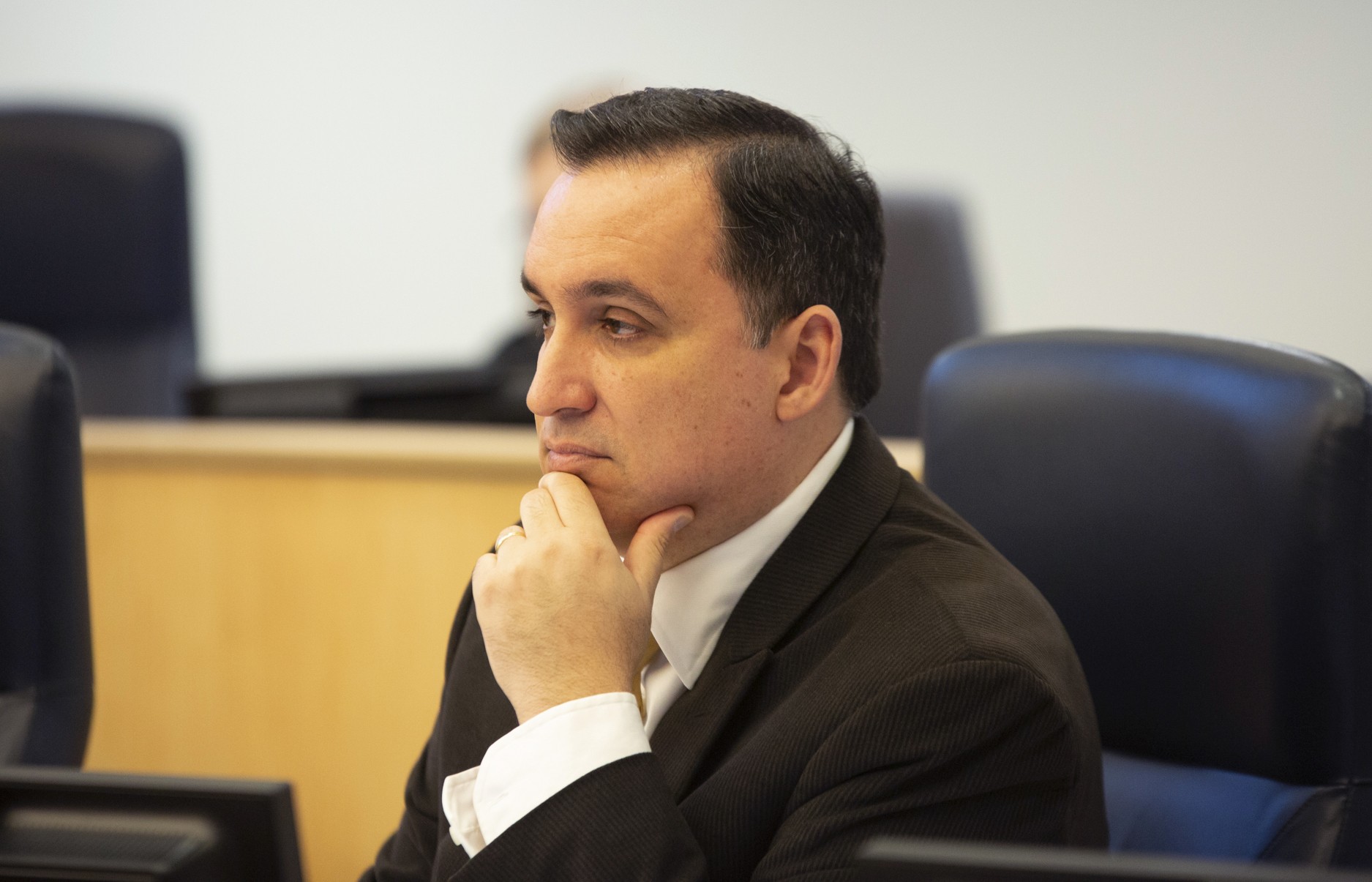 Sweden introduced the Vision Zero plan in 1997. Both Peel Region and the City of Brampton have now followed that country’s example. But Brampton has a long way to go in redesigning streets to be more pedestrian-friendly. Years of bad decisions and foot-traffic-averse policies have created one of the worst cities to walk in. An emphasis on suburban-style planning has created a car-focused city where most residents find it necessary to drive. More cars on the road mean a higher likelihood of collisions with pedestrians at intersections and sidewalks.

One of the reasons Mississauga councillors have cited to The Pointer for wanting to leave the region is bad planning by the city to the north. Brampton is known as a sea of low-rise sprawl, which has suffered self-inflicted damage to its own tax base as a result. But poor planning also has a direct impact on residents, often taking a heavy toll.

Last November, an 80-year-old man was struck by a vehicle near Steeles and Polonia avenues, near the St. Eugene de Mazenod Church. The man died later in hospital. In July 2016, 17-year-old Simon Radman was struck and killed by a minivan while riding his bicycle.

“Brampton residents are paying taxes for a product that causes harm, and kills,” Kevin Montgomery of BikeBrampton said in a 2016 presentation to council about Vision Zero. “Dealing with these collisions has implications on our taxes. At the regional level, dealing with collisions was the number one budget line item increase for Peel Regional Police in 2015. This also has implications for the City of Brampton Fire Services, with 15 percent of all responses—about 200 every month on average—dealing with collisions.”

The region’s Vision Zero framework sets a goal of a 10 percent reduction in collisions by 2022, with a focus on improving intersections and reducing aggressive, distracted or impaired driving.  Staff are working to make streets safer for those using active transportation (walking, cycling, etc.) through better street lighting, better sightlines, more traffic-calming measures and more. 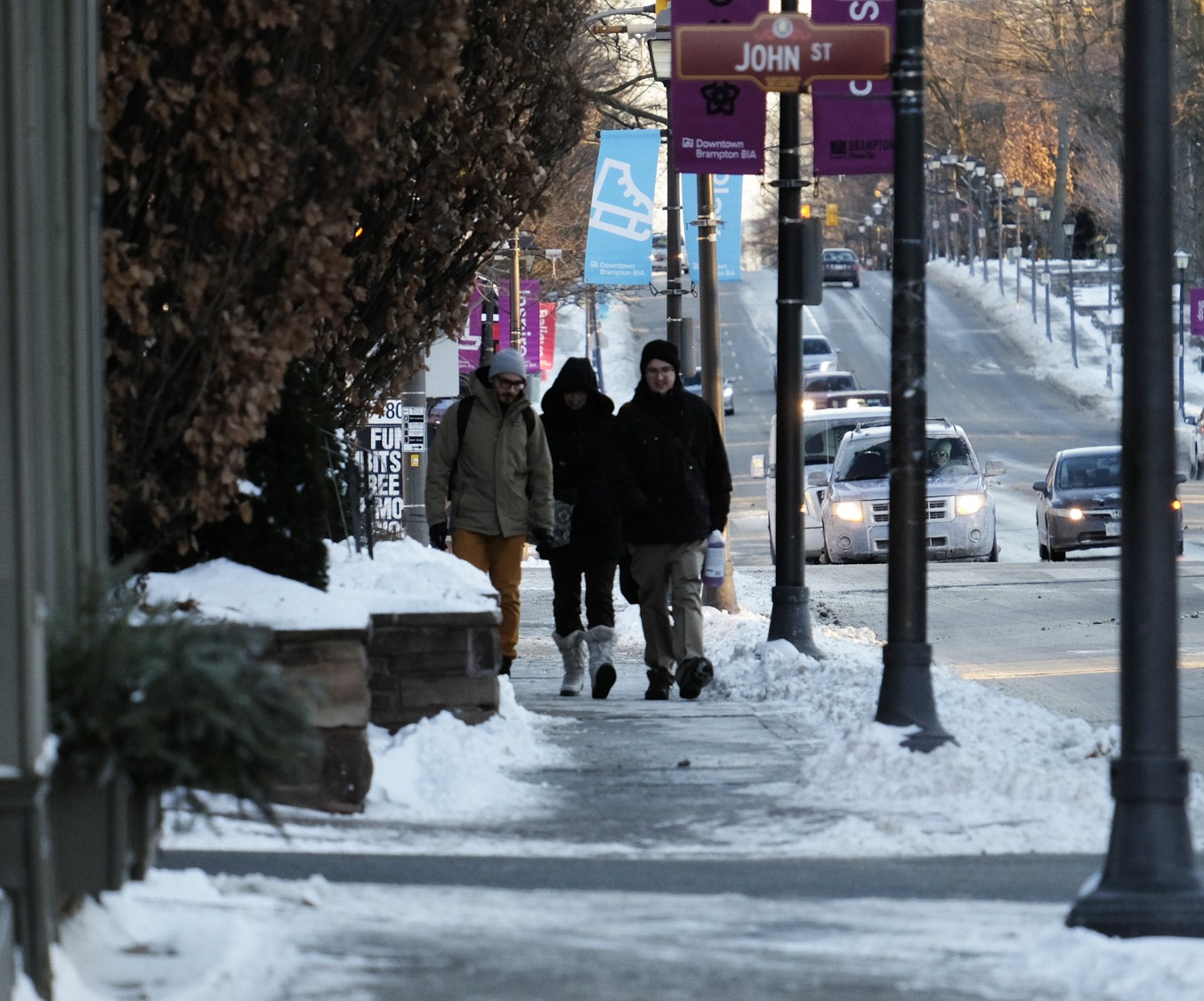 The region’s own statistics say the majority of collisions involving pedestrians or cyclists occur at intersections, with more than 5,000 in absolute numbers between 2010 and 2014. Aggressive drivers and inattentive drivers are also a big part of the problem.

Vision Zero proposes a number of countermeasures, starting with data collection and road rankings to produce accurate information about where the worst hazards exist and to aid public outreach efforts. Brampton also plans to build a lot of speed cushions, a type of speed bump with a cutout in the middle to allow larger vehicles, such as fire trucks, to pass through unaffected.

Brampton has the highest speed limits in the region, a factor that coincidentally contributes to high insurance rates in the city. Arterial roads often have limits that mirror highway speeds, as high as 80 km/h. With higher speeds comes a smaller margin of error. A car travelling 50 km/h takes 35 metres to stop safely, including 21 metres for the driver to react and 14 metres to brake. At 80 km/h, a driver needs 69 metres to stop.

It is not outside the realm of possibility that people would exceed 80 km/h on a municipal street, pushing stopping distance to more than 100 metres. Last week, Peel Regional Police impounded the vehicle of a 24-year-old driver who was caught speeding through a construction zone at 147 km/h, with a posted limit of 50. 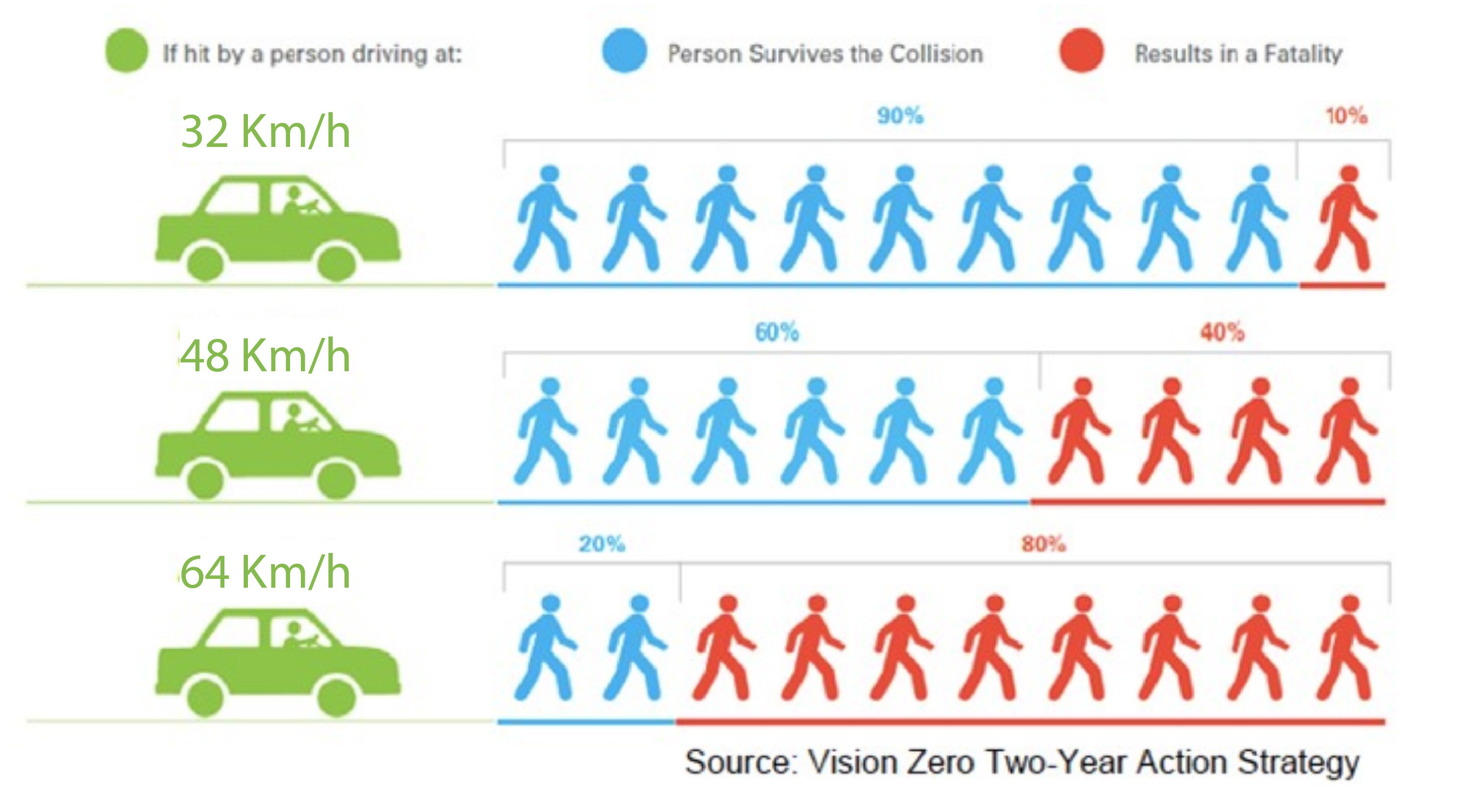 A study conducted by the Insurance Institute for Highway Safety confirms Vision Zero’s assertion that higher speeds equal a bigger likelihood of fatalities. Hitting someone at a speed of 32 km/h means that there is a 10 percent chance of killing that person; at a speed of 48 km/h the likelihood of a fatality rises to 40 percent. The chance of a death is 80 percent if the driver is travelling 64 km/h.

Peel averages 0.41 fatalities per 1,000 people, just slightly behind Toronto (0.42) and Ontario’s overall rate of 0.54. That Brampton falls below the provincial average may be one reason to breathe a sigh of relief, although it begs the question as to whether there are simply fewer people out walking in the suburban city than in other parts of the province.

Traffic volumes, interestingly, have been going down steadily on some streets since 2000. The City of Brampton’s GeoHub website, a data aggregator for the city, has a comprehensive list of streets with the highest traffic volumes. The stretch of road with the highest traffic volume is Queen Street east of Hanson Road (near Kennedy Road). In 2000, that area logged an average of 50,000 cars in a 24-hour period, a number that dropped to 38,310 by 2015, the latest data available for the area. It is not clear what caused the lowered volume, but the same pattern is repeated on many other roads.

The region hopes, through its Sustainable Transportation Strategy, to increase the number of people opting to walk, cycle and take public transit by 37 percent, in part by improving walking and cycling infrastructure and encouraging carpooling. The more walkers and bicyclists on city streets, the more vital implementing Vision Zero will be.