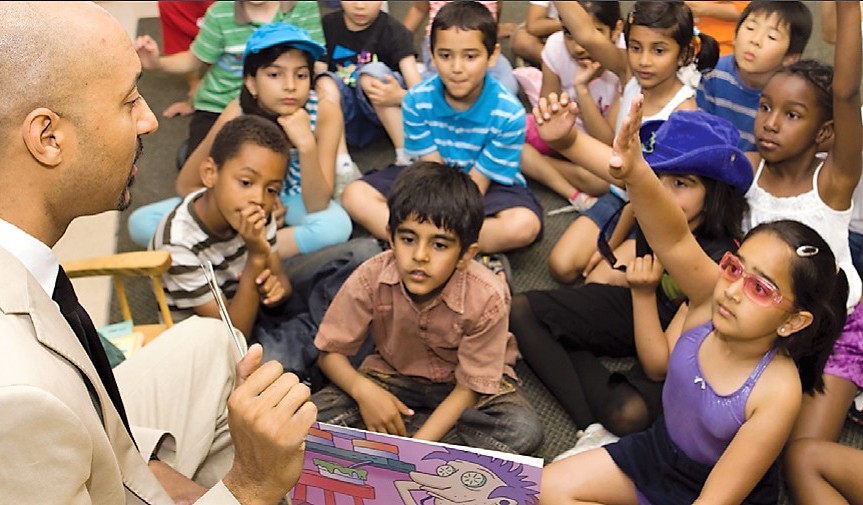 Photos by Joel Wittnebel/Government of Ontario

Brampton Mayor Patrick Brown is calling the province’s slate of cuts to essential services “shocking” and says “someone down at Queen’s Park needs to give their head a shake.”

Those comments followed a presentation on Thursday by Norman Lum, Peel Region’s director of business and financial planning, which indicated that the region will lose $45 million in provincial funding — including a hefty $20-million net cut to early-years childcare.

The stark reality Lum laid out is that to keep services exactly as they are now will require an 8 percent property tax increase, more than half of that owing to the provincial cuts.

“The provincial cuts mean municipalities have an impossible choice. Do we pass on a record tax increase to homeowners to make up for provincial cuts or do we cancel essential services” like transport for prisoners by Peel police, child care services, or programs to combat homelessness, Brown said in a statement to media. 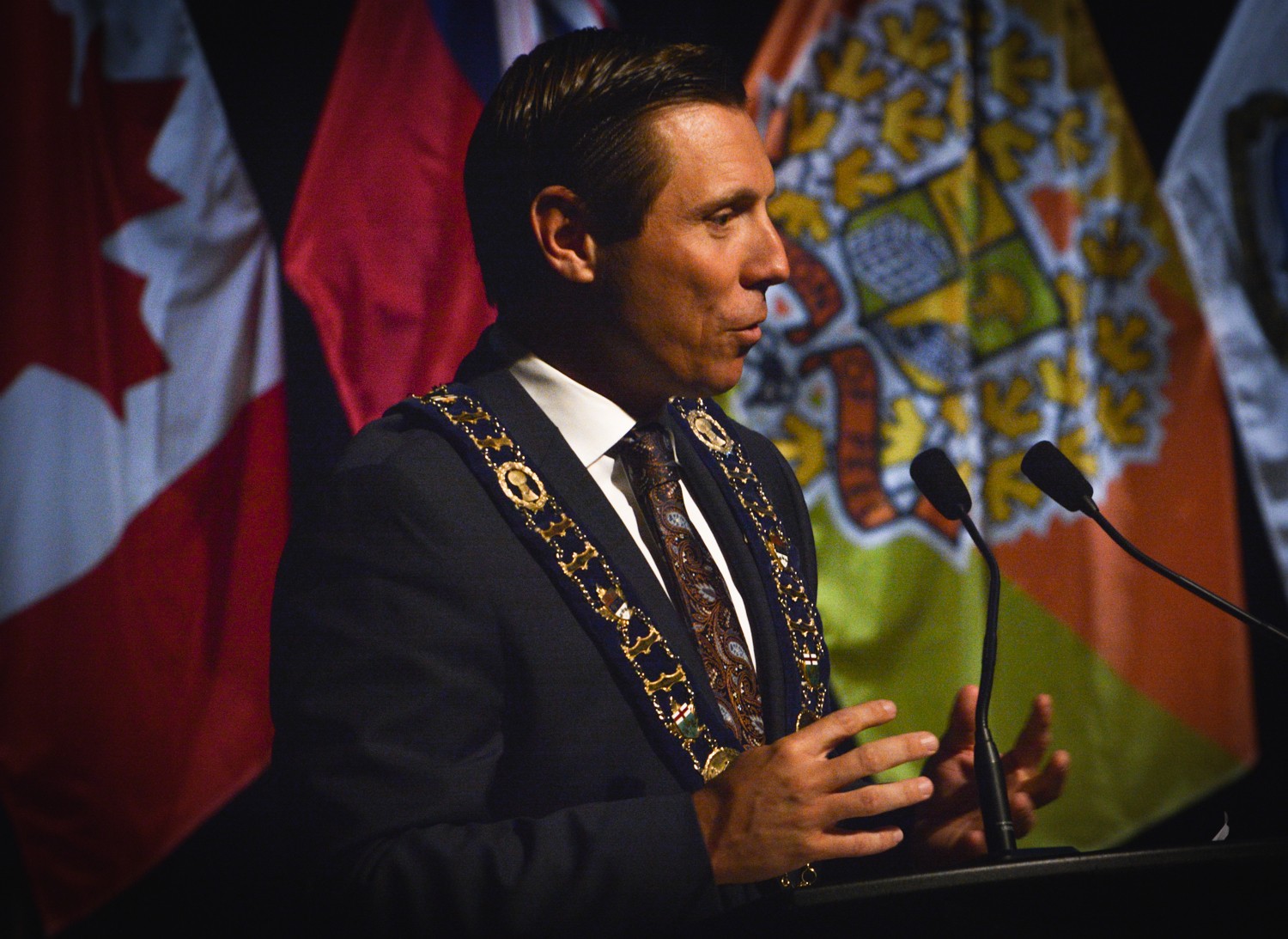 “The total estimated impact of the provincial budget is $45.1 million [over the first two years], or a net tax levy increase of 4.1 percent, representing an impact of $81 per household,” Lum said in summarizing the grim numbers.

“The impact of provincial budget changes is significant, but the region has limited sources, or options, for revenue to mitigate the impact of these changes,” Lum explained. Peel’s budget is also underwritten through user fees, development charges and grants from other levels of government.

Community homelessness funding will be cut by $1.3 million; some $600,000 will be clawed back from Conservation Authority funding to mitigate natural hazards, and Metrolinx’s Smart Commute program will lose $300,000.

Many of the services on the chopping block affect the most vulnerable among us, such as young children whose parents get help through early childhood learning programs hosted by the region’s EarlyOn Child and Family Centres.

Though there is an increase of $800,000 to home-based childcare programs, early years childcare is taking a huge hit: $6.1 million cut from base funding; $8.3 million cut from a  provincial childcare expansion plan — especially damaging in Peel, which has a bigger gap between childcare spaces and demand than most parts of the province; and $4.9 million from fee stabilization support, which helps keep childcare costs down. 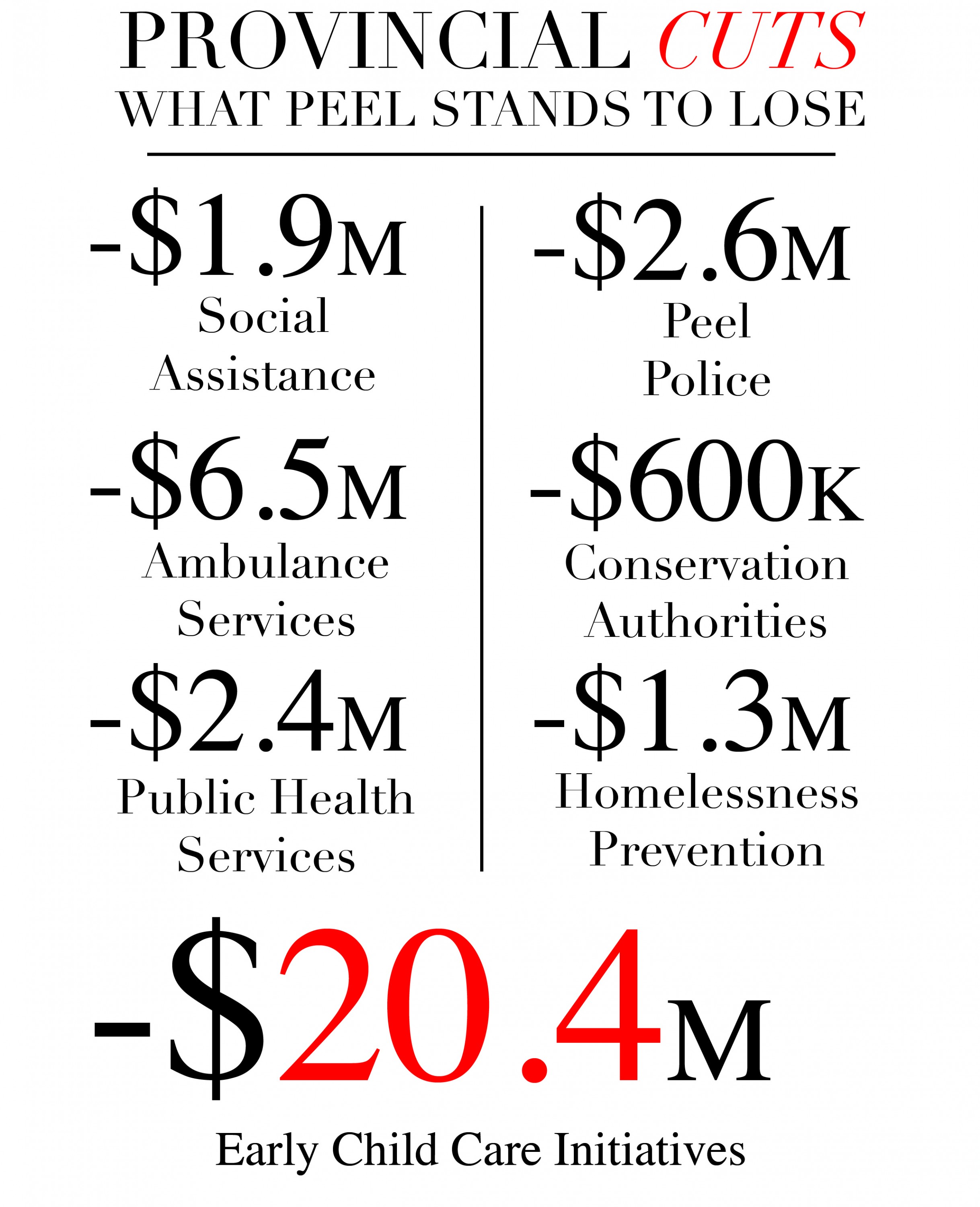 The province is also looking for $200 million in savings between now and 2022 in the public health sector. Dr. Jessica Hopkins, Peel’s medical officer of health, warned that cutting important programs could not only lead to health risks but, paradoxically, could end up costing taxpayers more.

“I’m concerned about cuts to funding in public health because public health helps save taxpayers’ dollars,” she told regional councillors. “For every dollar invested in public health programming, we know that we save $8 health and social care costs.”

Public health units guard public wellbeing through measures such as water testing, vaccinations and disease screenings. Many have blamed the deadly E.coli outbreak in Walkerton, Ont., in 2000 on cuts to water testing and control made by a previous PC government under ex-premier Mike Harris. In Peel, water testing carried out by the public health unit mainly deals with issues related to private well water.

It is far more expensive to clean up a disaster while it is occurring than it is to prevent one, Hopkins said. “An ounce of prevention is worth a pound of cure … if you invest a smaller amount now, you save a bigger amount later on.”

“This is all very deja vu,” said Mississauga Councillor George Carlson, who well remembers the cuts under Harris. “Those were horrible days. Eventually the fever burnt out, because really you can’t make cost-cutting or tax reduction very sexy for very long, because people start missing those services … I heard this schizophrenic approach from people, saying, ‘Boy, we love those cuts but, man, when are we going to get back our ECEs (early childhood educators) and kindergarten …’ Well, I said, ‘You voted for these idiots,’” Carlson told council.

“They are just downloading costs, user fees or property owners are going to pay for this,” he said after the meeting. “There is no creativity here.”

Carlson reiterated that cuts to preventative programs in public health can lead to much larger costs in the long run for the healthcare system.

An exasperated Mississauga Councillor Karen Ras called the changes “death by a thousand cuts. So it’s not downloading, but in a sense it is downloading the debt and deficit issues from the province onto the municipal taxpayer.”

Brown proposed a radical strategy to get the province and the public to pay attention to the effect of the cuts, which were referred to as “austerity” by Mississauga Councillor Chris Fonseca. Brown proposed that the region suspend prisoner transport to show how the province’s $700,000 cut to that particular service would make it difficult to provide something usually taken for granted. The council chamber fell into silence at that idea, but further points made on the matter garnered laughter and support from councillors.

“The province has downloaded enormous costs to municipalities, and I think the public needs to realize that there is only one taxpayer,” Brown told The Pointer. “To simply take a provincial expense and download it onto the backs of homeowners isn’t right. I think that they [the PCs] think no one will notice.”

Regional solicitor Patrick O’Connor pointed out that prisoner transport (to court and back to jail) is a “statutory” requirement and that the service has to be provided. “You would be in breach of your legal obligation in that scenario,” O’Connor told Brown.

Brown addressed this concern to The Pointer: “If the province is freezing that funding, where does it come from? Is there a magic tree? So that’s the point.”

“The province shouldn’t be cutting it,” Brown said when asked about the legal precarity of his suggestion, which was clearly intended as a way to capture the public’s attention through media reports.

Regional council agreed to launch an advocacy campaign to inform the public about the possible effects of the cuts.

It wouldn’t be the first time they’ve gone to battle with the province since the provincial budget was released. Just last week, Brown and Mississauga Mayor Bonnie Crombie, in their capacity as members of the Large Urban Mayors Caucus of Ontario, sounded off on the same cuts being discussed at Thursday’s regional meeting. Both signed on to a letter from LUMCO’s chair, Guelph Mayor Cam Guthrie, that described the cuts as a means of downloading costs onto the municipalities “through stealth” and sounded the alarm about what those cuts would mean at the municipal level.

Earlier in the year, the region said it would launch a public campaign calling into question the PCs’ ruminations about eliminating development charges for building water and wastewater systems to service new construction. Regional CAO David Szwarc warned that a policy of placing those costs on ratepayers’ bills instead of charging developers, gutting the principle that “growth pays for growth,” would mean increasing utility rates by as much as 73 percent — at a cost to property owners of more than $500 a year on average. The development charges remained intact in the government’s subsequent housing legislation.