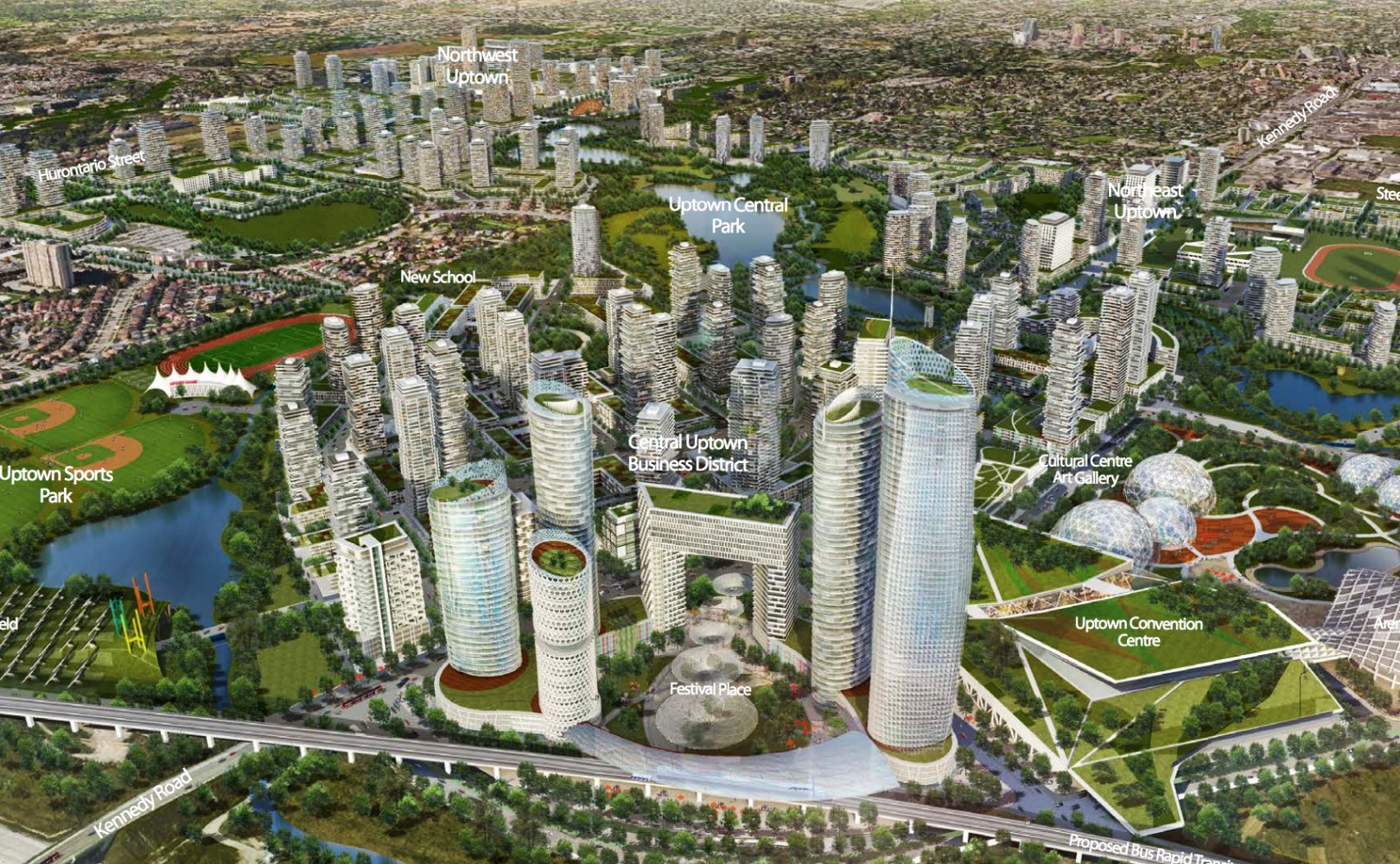 Renderings from the City of Brampton

Going under the microscope, could the 2040 Vision become Brampton 2060?

“If it does not know where it wants to go, a city will surely never get there.”

That line, which appears in Brampton’s sweeping 2040 Vision document, encapsulates the reasons for keeping an eye to the future. The previous council endorsed the 2040 Vision—with its detailed schematics for a futuristic, utopian city, completely unrecognizable from the current Brampton skyline—as the path forward to transforming the city.

Until now, it’s been mainly an aspirational document. But as part of the 2019 budget, it’s set to go under the auditor’s microscope for a hard look—in beancounter-speak, a “comprehensive value proposition and return on investment” audit—on its 28 action items. The city is bringing in consultants from DIALOG and Deloitte to assist with the review.

When the Vision was released in 2018, it garnered national attention. But it was notably lacking in details about the net cost of building this grand vision. The 2019 review, which will look to affirming and realigning the vision’s priorities to get the best value for dollar, could result in making the 2040 Vision more of a 2060 reality.

That news might come as a surprise to residents who have celebrated the document as a blueprint for overcoming Brampton’s shortcomings when it comes to sustainability, transit and housing.

However, the document was never meant to be a fully realized action program.

“The Vision was not designed to function as a plan, but as an aspirational document that reflects the community’s desires for Brampton,” city spokesperson Natalie Stogdill says. “The long-term implementation plan must be developed based on evidence-based decisions, which includes doing a comparative analysis.” 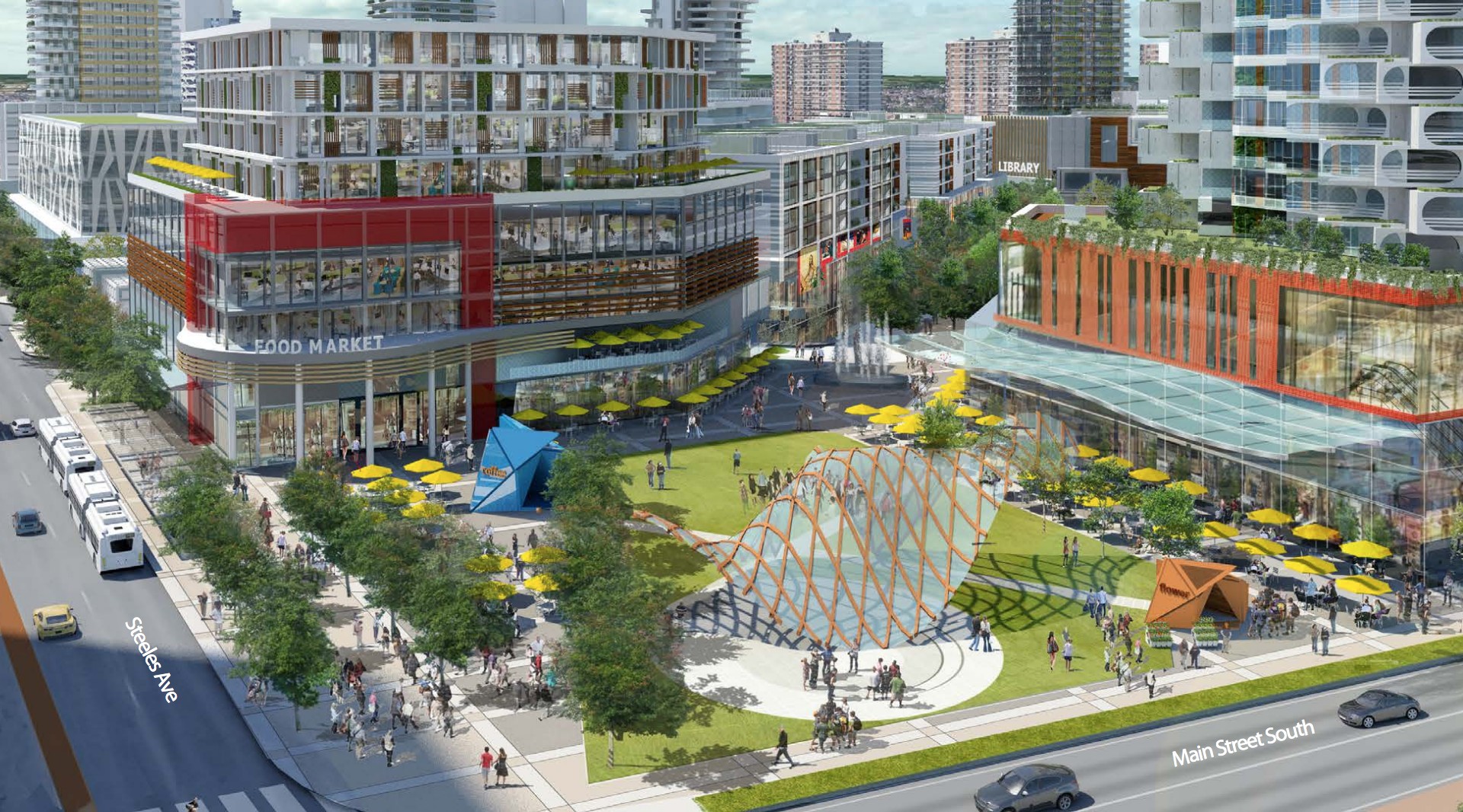 The seeds for a review are found within the Vision document, which points out: “A vision is not a plan or policy or strategy that moves directly to implementation,” noting that all of its recommendations need to be “debated and fully evaluated against the best facts.”

Described by its authors as a “rich motherlode of thinking,” the 2040 Vision describes a future Brampton filled with prosperous, green, interconnected neighbourhoods, populated by healthy citizens who rely on bikes and transit more than their cars and who are continually engaged in the city’s thriving arts and culture scene.

Foundational elements of the plan include dual city “cores” in downtown Brampton and Uptown, linked by a figure-8 shaped higher-order transit network. These city centres are surrounded by five “town centres,” areas that will “specialize and leverage each of its unique features and location and build new landmarks and character to differentiate itself.”

The audit proposal isn’t meant to reverse or eliminate any of these ideas.

“The Vision was intended to be tested and tweaked as appropriate, prior to implementation,” according to the City of Brampton. “This review is not intended to remove or change the actions, but may speak to alignment and timing for greatest success. Since the Vision looks to 2040, the wishes of the community may also change over time, so community engagement will remain a critical component at every stage of implementation.”

Creating the 2040 Vision was an extensive process that kicked off in September 2017. More than 11,000 Brampton residents contributed ideas to the project, through participating in about 65 community events, two workshops, and 20 work sessions.

Overall, Mayor Patrick Brown says, this was a “positive process” for the city. It’s important to have an underlying idea of where the Brampton residents want their city to go, but that doesn’t mean the vision will remain static, he says.

“A vision can be updated; it can be amended,” Brown says. “(But) I think it continues to remain a foundational document.”

Brampton’s new mayor has previously expressed support for the 2040 Vision. During an election debate last fall, Brown noted, “If I’m mayor, you’re going to have a partner to make sure we can actually realize that vision.”

However, some things have changed since then.

One of the first orders of business for the new council was a motion from Councillor Gurpreet Dhillon that roared through approval at city council, returning the city’s desired LRT route to the Main Street alignment that had been rejected by council in 2015 despite being championed by former Mayor Linda Jeffrey. 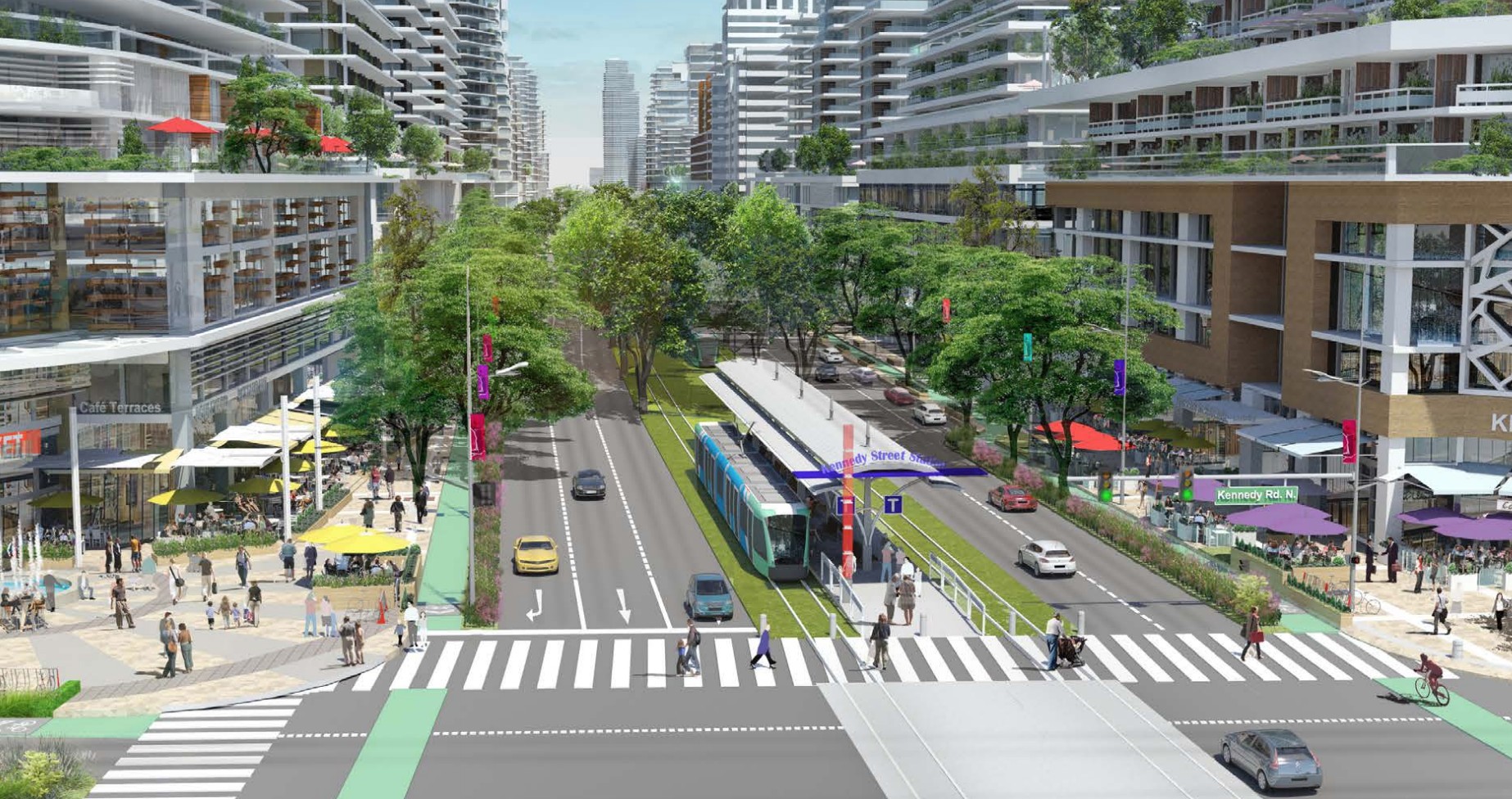 The earlier rejection closed the door on millions of dollars in government funding that would have extended the Hurontario LRT directly into Brampton’s downtown. The debate back in December had Dhillon and Brown locking horns over differing visions for transit. But the motion passed unanimously after Dhillon agreed to Brown’s amendment to include an option to tunnel parts of the route that had been particularly controversial.

The dream of an LRT in Brampton is still years away as the city undertakes the needed environmental assessments and identifies new funding for it. But the Main Street LRT is already a departure from the 2040 Vision. Therefore the review recommended in this year’s budget could serve as an opportunity to rethink transit elements in the document to align with the new council’s vision.

The review will be completed in lockstep with portions of the Vision that are to be implemented over the coming year. That makes for a slightly confusing process, but one the city ensures will not delay key aspects that are supposed to happen this year. However, it could result in a slight change of plans for certain items slated for 2020 and 2021.

Already, elements of the Vision have been pursued by citizen advocates.

In February, David Laing, the chair of Bike Brampton — one of the groups that are part of Brampton’s Grow Green Network—formed a task force to make a pitch to council to create the Institute for a Sustainable Brampton. During his delegation, Laing told councillors a “tectonic shift” is happening within the city as people look to their elected officials to focus more on the environment and sustainability, especially as threats from climate change are looming larger than ever.

The proposed ISB, if approved by council, would become an arm’s-length, not-for-profit organization to help the city with all things green and coordinate efforts to help Brampton achieve what is known as “one-planet” living. A concept developed in the UK, the idea forms a key part of the Brampton 2040 Vision’s environmental goals, which aim to ensure “happy, healthy lives within the limit of our planet, leaving space for wildlife and wilderness.”

The review to be undertaken this year will help set priorities for which of the 28 action items will be pursued soon, in the medium-term, or long-term, according to the City. “This information further assists with evidence-based decision-making and presenting the community and Council with the best and most complete information.”

Getting its ducks in a row, essentially, will help the City advocate more effectively when approaching senior governments for money to get things done.

So what parts of the Vision are going ahead in 2019?

For one thing, the Brampton Public Library will be working on plans for the “City Library” that will become the library system’s main hub, within the planned Centre for Innovation. The Policy Planning department will continue working on drafting a strategy for implementing the Vision’s action items. And, while the details are vague, the transit and urban design departments also plan to continue using the document as a guideline for decision-making in the year ahead.