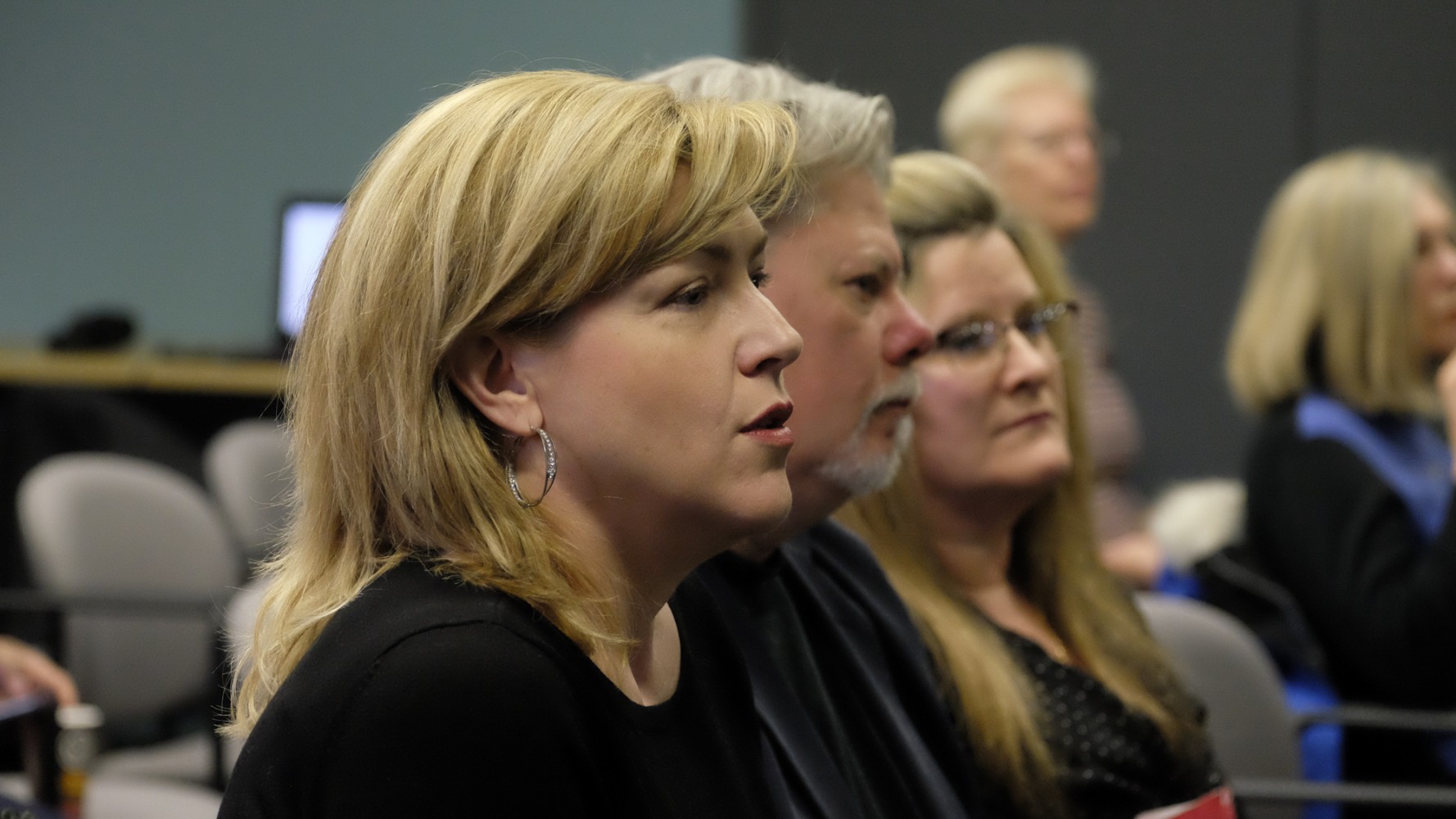 The Flower City could get a little more beautiful in the near future. City council asked staff on Wednesday to consider creating an arts task force — an idea championed by the Brampton Arts Coalition Committee, a group of local industry professionals that includes members from Beaux Arts, the Brampton Concert Band and Brampton Jazz Mechanics.

The coalition’s ultimate goal is to revive the Brampton Arts Council, which ended operations four years ago after the City restructured its community grants program.

“Arts councils serve all of the artists in our communities through various needs. Arts is an economic driver which is difficult at times to measure ... it creates a diverse opportunity for our city’s patrons and visitors,” coalition chair Sharon Vandrish told The Pointer.

Arts councils typically operate at arm’s length from local governments, with the aim of supporting and encouraging the arts — and boosting their benefits to the quality of life and economic wellbeing of the city — through financial support to artists, improving public access, awarding prizes, organizing events, and the like. 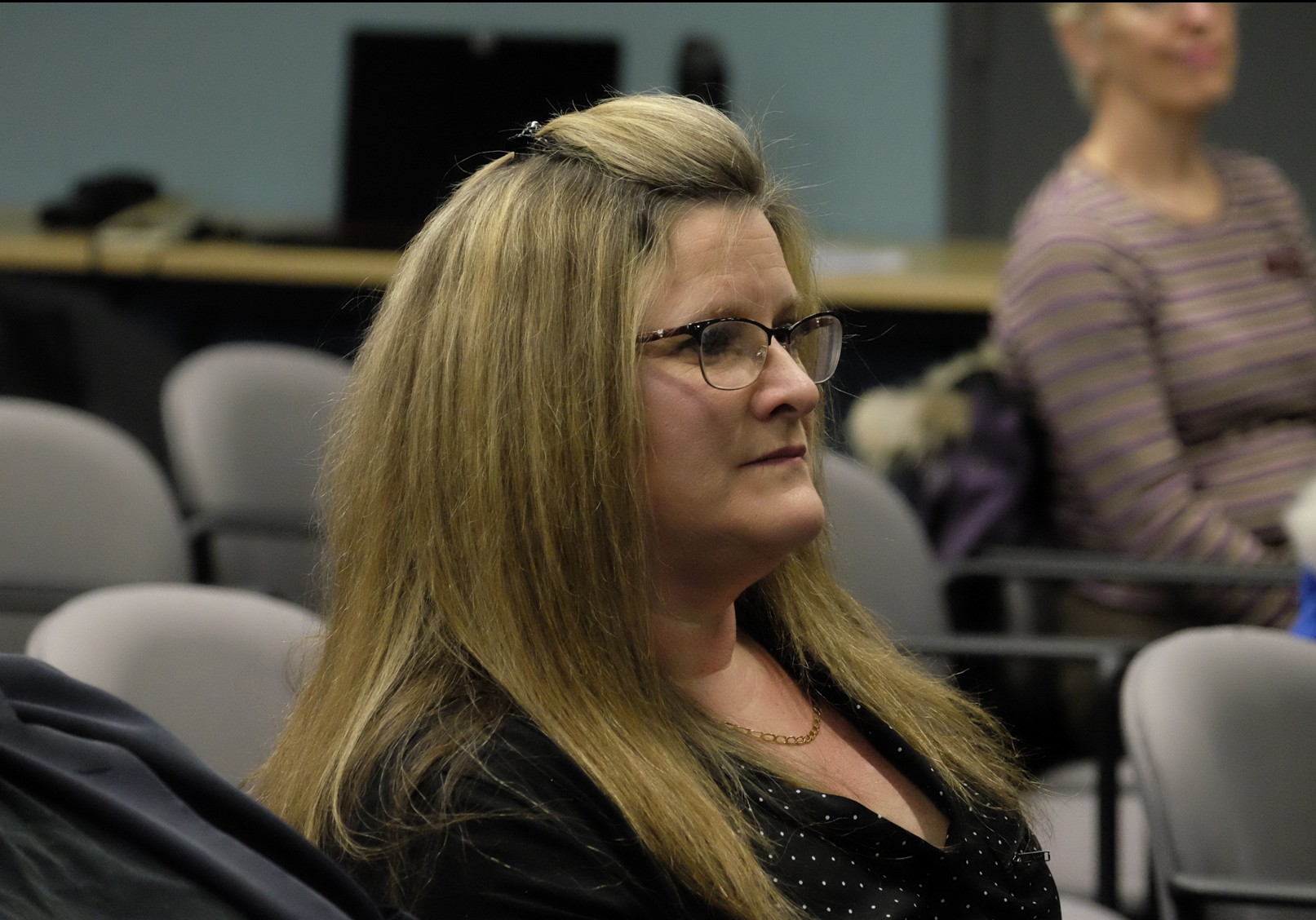 Brampton’s arts council, founded in 1978, had been deriving its core funding from the city since 2002. After the grants were restructured, its funding was cut in half. Eventually, the organization became insolvent before it could find other sources of money. Disbanding created a void in Brampton’s arts scene, which, according to the coalition, has contributed to the loss of 50 percent of the arts groups that existed in Brampton in 2014.

“The BAC doesn’t put on performances [or] sell tickets and has no other means to raise money,” Rob Filkin, a legal advisor to the Brampton Arts Council, said at the time. “We looked at seeking donations from the community, but it’s not sustainable.”

While the coalition hopes to revive the arts council, the group is proceeding cautiously so as to consider all options. “Four years ago when we disbanded the arts council, rather than doing that, what should have happened at that point was a reassessment of the arts community and its support or lack thereof, which is what we are finally getting now,” said David Harmsworth, the group’s vice chair.

It is too early to say what a reintroduced arts council might look like, but members of the coalition say it will be a “whole new” council rather than one that’s just picking up where the old one left off.

“There are loads of examples of successful models already out there. We just have to look at the specific needs of our arts members and and [the city’s culture scene] and what makes the most sense,” Vandrish told The Pointer.

Vandrish and Harmsworth, as chair and vice chair of the coalition, would head the interim task force looking for best ways to establish a new arts council in Brampton.

“It’s going to evolve over time. Brampton has changed over the years, and we want to be a future-ready model of the arts council,” said Regan Hayward, director and curator of Beaux Arts.

Comparison figures provided by the coalition show that Brampton has largely starved its arts scene, providing the least to the arts among nine cities in terms of funding and human capital. 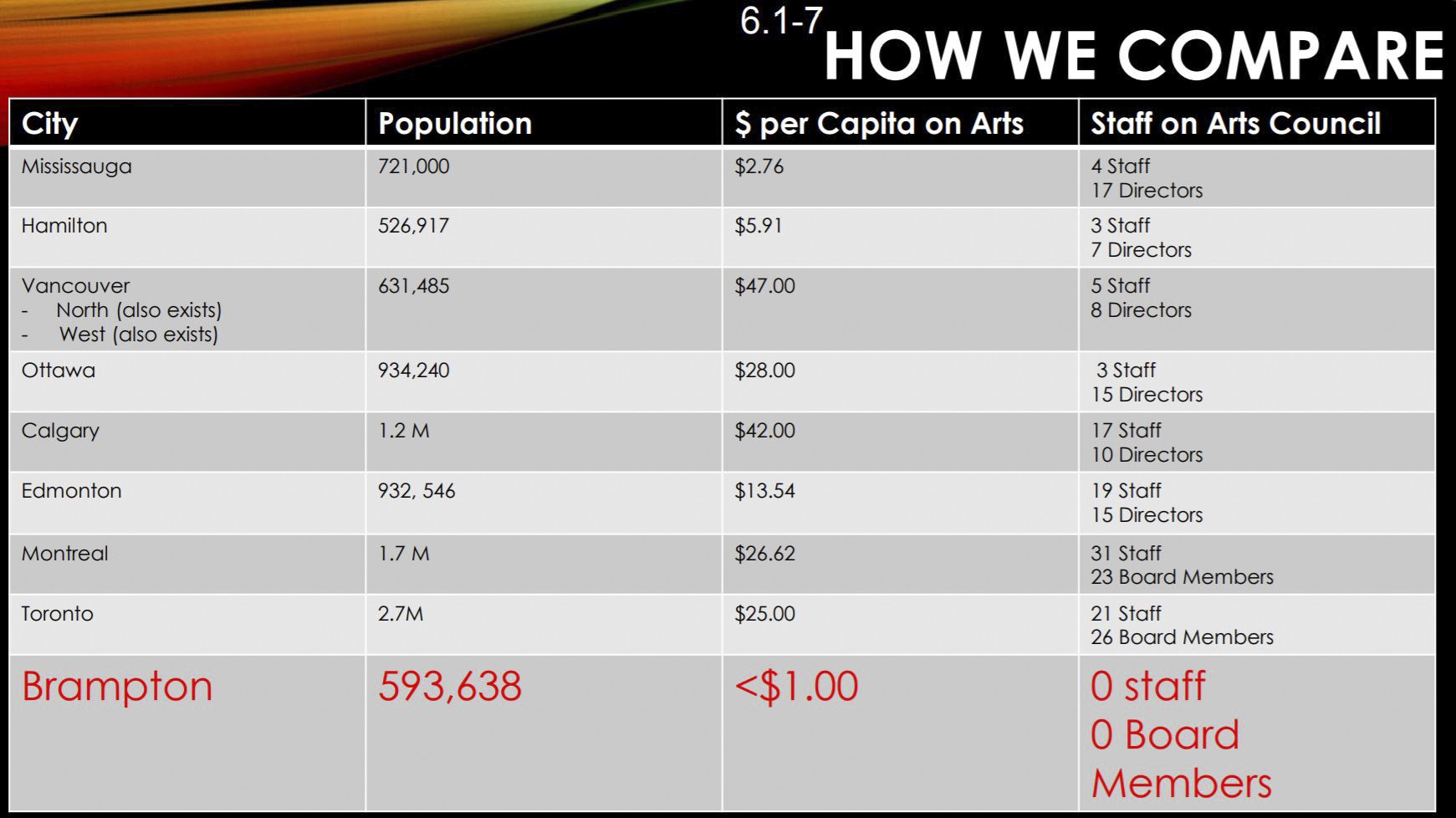 The group’s chart shows that Vancouver shells out the highest per capita funding towards the arts among Canada’s large cities, about $47 per person. Montreal has the most robust arts council in terms of industry professionals overseeing the arts in their city, about 31 staff members and 23 board members.

Former chair of Brampton Arts Council, Chuck Scott has blasted council in the past for their lack of support for the arts in Brampton. During a recent Future Ready meeting he asked city councillors, “I have listened to the artists, art groups and cultural supporters and they wonder why in an age where study after study say arts and culture creates jobs, drive economies and is a future proof industry, why our city is so woefully underfunded in this area.” 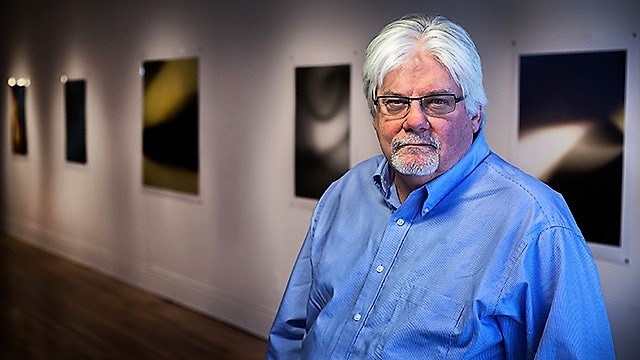 Councillor Jeff Bowman, who was a member of the disbanded arts council and is in favour of restoring it in Brampton, says the city does provide some “gifts in kind” to facilitate cultural events. “Every time a group comes to the city of Brampton and wants to hold an event, for instance, we give them in-kind services. If they want to do it at Market Square, we provide the security or we provide the lighting or provide the big screen [in Garden Square],” Bowman told The Pointer.

The group has a rough timeline of when it would like to see all the elements of an arts council in place. While acknowledging the coalition’s objectives for the year are subject to change, they hope to have the council and a budget in place by this fall.