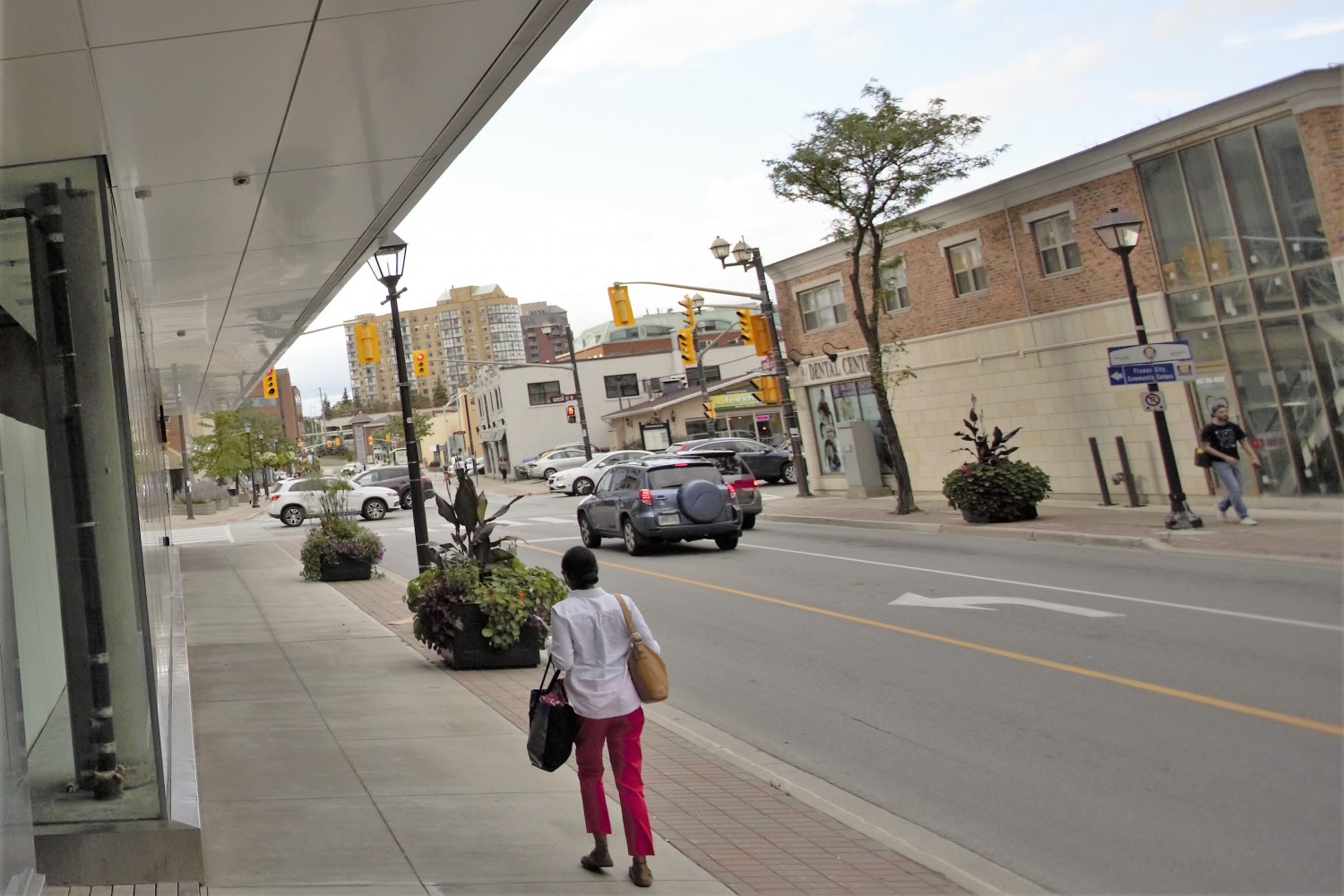 Because we don’t see the bones beneath our skin, we never pay attention to the framework that supports our entire body. Until — something goes really wrong. A stress fracture, a crack, a twisted arm, and suddenly the white skeleton tears through. Shock ensues.

And like the bones, veins and nerves beneath our skin, a city has its own skeletal system. Roads that connect the important parts, pipes beneath that keep the good fluids flowing in and the bad out, utilities that keep everything humming. Systems that run unseen by residents.

For Brampton, the “body” is relatively healthy. The majority of its parts — the roads, the pipes, the buildings, the vehicles — are no more than 20 years old. Youthful, one might say.

However, as we all learn, youth is fleeting. A report that recently landed on the desks of councillors delivered that message with a resounding thud.

Brampton currently owns approximately $3.5 billion in assets, ranging from roads and sidewalks to city-owned buildings. Replacing all of these assets would cost $5.8 billion.

It’s an impressive collection of city-owned infrastructure. And its vital to the city’s growth, which is currently pushing up population numbers at a rate more than three times the national average. It will also require the City of Brampton to invest tens of millions of dollars in the years ahead to keep it all in working shape. 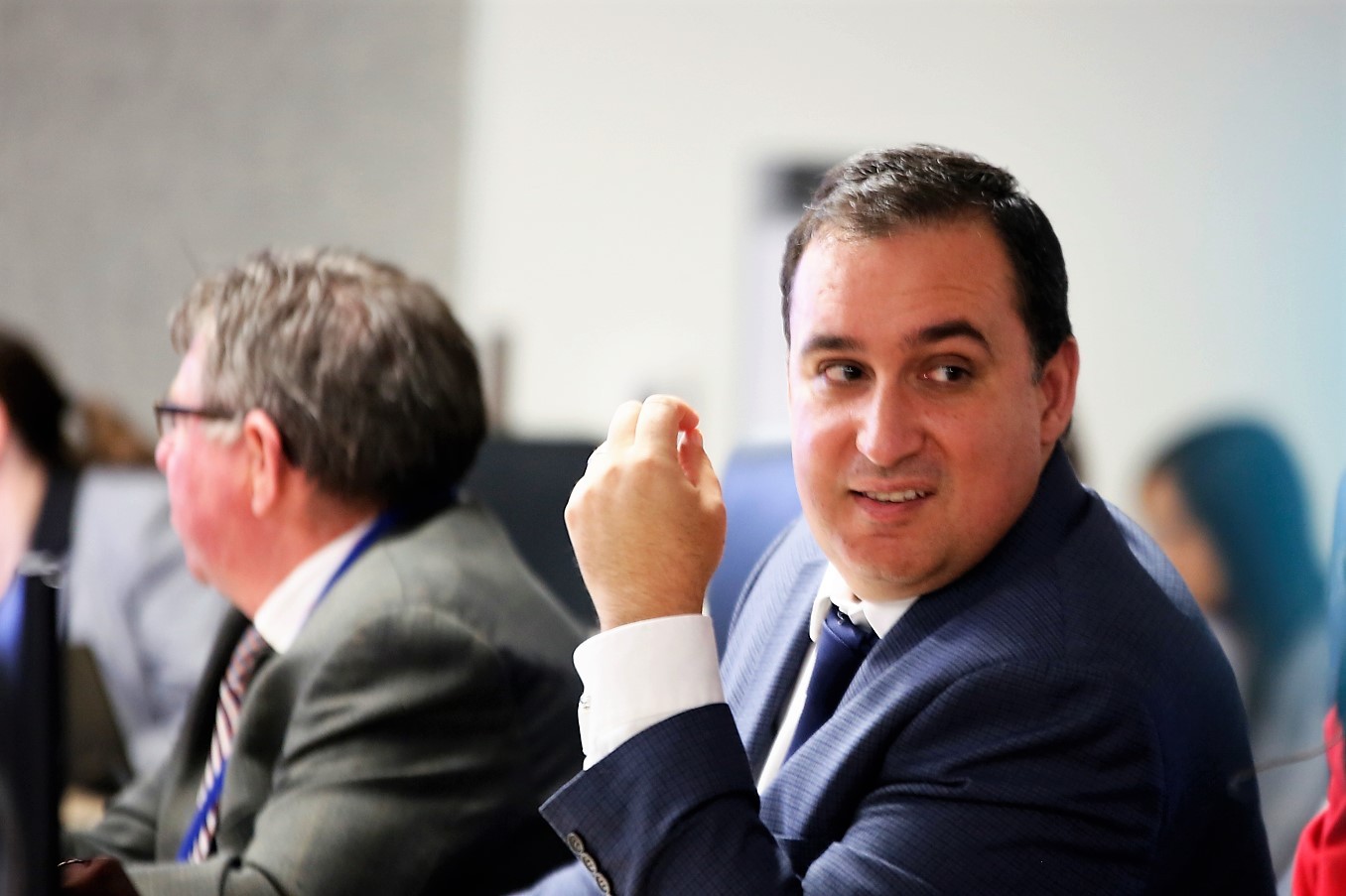 Over the next 10 years, with two-thirds of the city’s infrastructure on the decline, the city forecasts it will need to spend $1.4 billion to address the aging needs of its assets. The vast majority of that money, $953 million, will come from the taxpayers who use and rely on roads, community centres, other municipal spaces and the unseen network of sewer pipes and water mains the most.

Unfortunately, it won’t be enough.

Currently, the city is behind by about $246 million on infrastructure spending, a gap city officials label as the “infrastructure deficit.” That gap is expected to more than triple by 2027, surging to $743 million if investment levels continue unchanged.

“We almost have a ticking time bomb here,” said Councillor Paul Vicente. “This is something that I think this city really needs to keep its eye on.”

In fact, cities across the country are watching their own ticking time bombs, closely. According to the Association of Municipalities of Ontario, the cumulative infrastructure deficit for the province’s municipalities alone is $60 billion. That staggering amount is simply too much for cities and towns to handle on their own, so provincial and federal funding programs have been set up to assist with the problem, through the sharing of gas taxes and various grant and subsidy programs. Dollars also come attached to government promises. Prime Minister Justin Trudeau’s Liberal government pledged in 2015 to spend an additional $60 billion on infrastructure over the coming decade, for affordable housing, waste-water systems, transit and a long list of other big-ticket items that municipalities across Canada desperately need to address.

However, as Mayor Patrick Brown has pointed out repeatedly, Brampton is not getting its fair share.

Like passengers on the Titanic, municipalities can take little comfort in the fact they’re all in this together. Shared gas tax funding and other opportunities that municipalities have to fight over are only Band-aids that will do little to address a gaping wound that keeps getting bigger. Senior governments need to provide a much bigger bandage.

The numbers suggest the country’s cities are right to be miffed with the current situation. In Canada, municipalities are responsible for 60 percent of the vital infrastructure that keeps the country running. These integrated assets allow workers, goods and services to move, businesses to operate and the economy to thrive. Yet, local governments receive only about 12 cents of every tax dollar paid in Canada.

In 2017, AMO suggested a change. It pushed the province to increase the HST by 1 percent to raise additional funds to pay for municipal infrastructure needs. The ask was made in Ottawa during AMO’s annual conference; the answer from provincial officials was a resounding no.

During council’s first meeting of the new year, Brown suggested a new approach to tackling the issue. 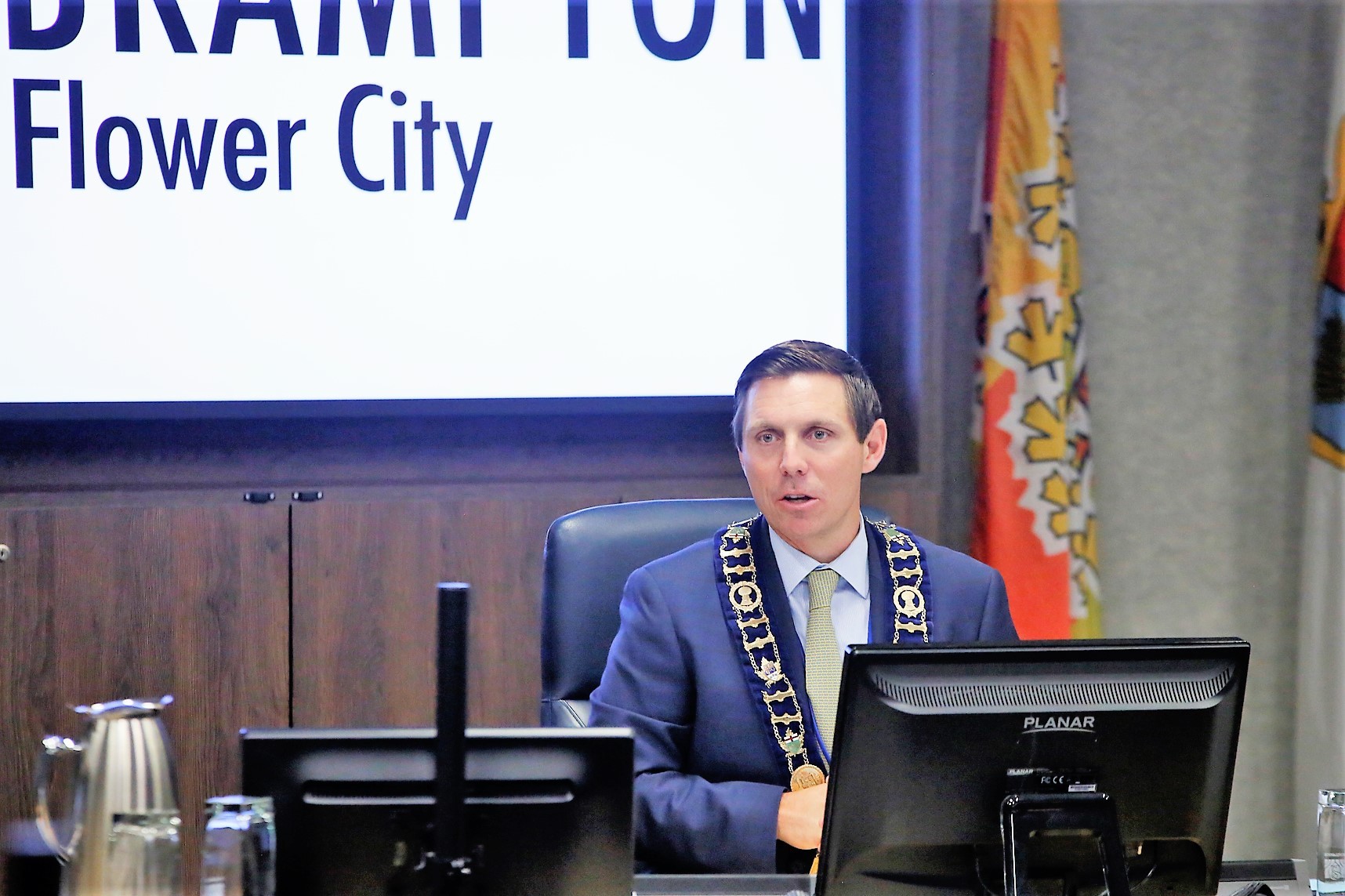 Mayor Patrick Brown says higher levels of government need to step up with funding for infrastructure.

To give the upper levels of government a clearer picture of what is needed, Brown suggested bundling the city’s infrastructure needs together and presenting it as a single request.

The bundling could present quite a shock, because a $743-million deficit clearly isn’t alarming enough to get action. That number does not include things like dollars needed for the future Ryerson University campus, a solution to the downtown flooding issue, LRT construction, or support to expand local hospital facilities, which are currently operating at the breaking point. 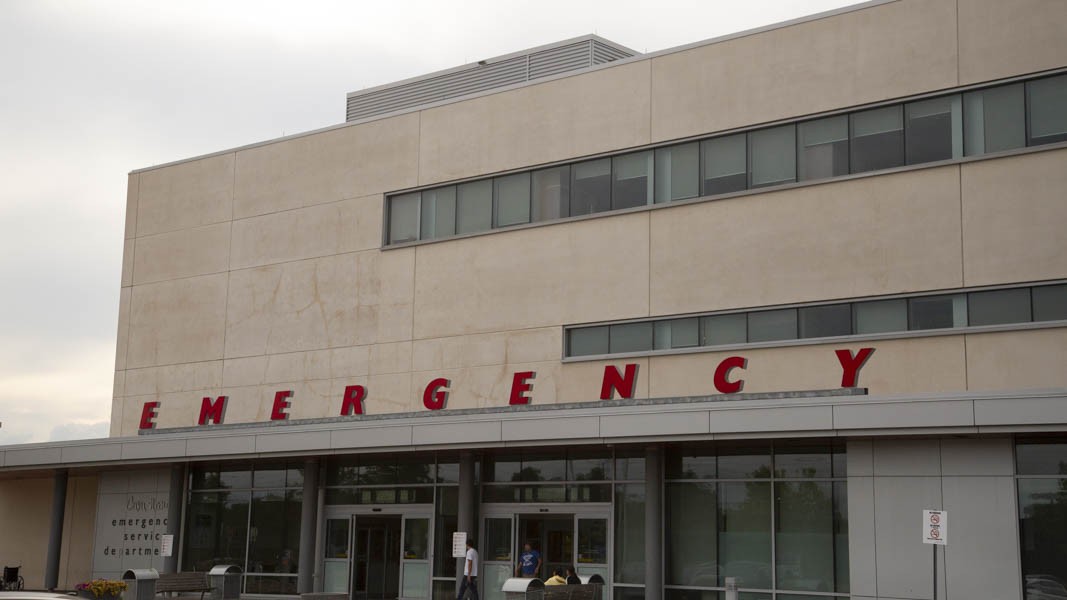 Alongside Brown’s bundling idea, Vicente suggested creating a more concrete list of “shovel-ready” projects, so that when the province or the feds offer an opportunity for funding, the city can move quickly with an application for a project that is ready to go. Staff admitted that these projects and applications have been handled on a more ad hoc basis in the past.

“Time is of the essence,” Vicente said, noting that the city should prioritize knocking off the smaller projects, as opposed to the big, headline-grabbing initiatives.

“There’s a lot of work that can be done, even in just the next eight to 10 months, to make sure that we get this number down and offset the potential cost for the taxpayer and to get these projects built,” he said.

This isn’t the first attempt Brampton has made at tackling the infrastructure deficit, though it may be the first coordinated effort to take the issue directly to other levels of government.

Like many municipalities in Ontario, Brampton has employed an infrastructure levy to collect more dollars from the property tax base specifically for infrastructure improvements. In reality, the levy is window dressing for an additional tax on top of normal annual increases.

Staff estimate that an annual levy of 5.9 percent is required to eliminate the cumulative gap by 2027. That could be a tough pill to swallow for a mayor who has already pledged a tax freeze for Bramptonians this year, on the city's portion of the property bill. His plan will no doubt kick the can further down the road, for politicians and residents to deal with in the future, while projects are added to the "deferred list" and aging infrastructure continues to crumble, unless Brown and the rest of the new council can find significant efficiencies. They are aware that an external audit in 2015 made clear that the pathway to meaningful, sustained savings is to dramatically trim the city's bloated staffing levels. Brown has already called for an external audit by KPMG that might just lead to the type of needed fiscal belt-tightening that would put the city on the right course.

Beyond the out of whack labour costs, which as of the 2015 audit were eating up almost 95 percent of the increased revenues from growth, blame for the growing gap could also be placed on irresponsible planning and investment.

Like the recent decision to pause the infrastructure work for Downtown Reimagined, a program of streetscape improvements, the work is often pushed down the line. That has an impact not only on Brampton’s bottom line, but also potential investments in the city’s future. Up-to-date and stable core infrastructure is needed to support growth in the downtown; pending those improvements below the surface, major residential projects are now on hold. Brown was visibly frustrated in December when he questioned why the work to understand the scope of the Reimagined project had not been done years ago. The unknown flow of sub-surface water channels was the reason staff gave for cancelling the project, for now. But the price tag might have been the bigger factor. Bids, including one of more than $70 million (more than twice the estimate) were far above what staff said the project would cost. And with the latest delay, that number could balloon by the time the critical work is done.

The problem with pushing infrastructure repairs and replacements into the future is that delays beget delays. Nowhere is this more clear than in the reports that have been delivered to council.

In 2017, council approved its long-term financial master plan. In that report, it states that, “the growing infrastructure gap can mainly be attributed to the insufficient investments planned for transportation services, stormwater, and transit services. It is important to recognize that much of the accumulated infrastructure gap is related to the existing backlog of ‘overdue’ infrastructure requirements in 2016 and 2017.”

Now, read the state of the city’s infrastructure report debated by council on Wednesday, Jan. 16.

“The growing infrastructure gap can mainly be attributed to the insufficient investments planned for transportation and stormwater services. It is important to recognize that much of the accumulated infrastructure gap is associated with the existing backlog of ‘overdue’ infrastructure requirements in 2018 and 2019.”

Like a shell game, the delayed projects from 2016 and 2017 were pushed over to this year, and now with some slight of hand, projects will likely be shuffled into 2020 and beyond.

So, what will the eventual solution be? Either make the taxpayers cover the required infrastructure levy, on top of the city's portion of the property bill, of almost six percent each year for almost a decade; or dramatically increase property tax revenues by creating more commercial/employment growth; or cut the bloated city payroll to get the necessary savings. Or maybe a combination of all three. Maybe, the feds will step up with part of the money to bridge the growing infrastructure gap. It is an election year.

“It is a challenge, there’s no doubt about that,” city treasurer David Sutton told council on Wednesday.

But even if none of these things are accomplished, it's still not rocket science to pass a tax freeze. Just keep kicking critical infrastructure repairs and upgrades down the road.

Then pray to God that the city's body doesn't collapse.