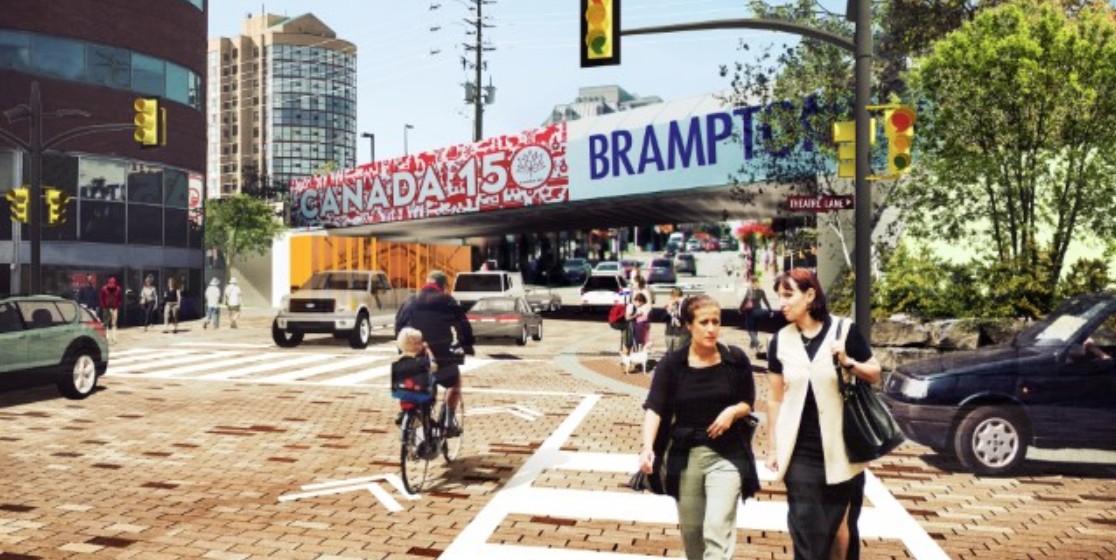 Photos by Joel Wittnebel/renderings from the City of Brampton

Despite a consultant’s warning a decade ago that Brampton’s infrastructure would be at a breaking point by 2019, the regional government has been advised to postpone major infrastructure repairs in Brampton’s city centre. The decision comes after Brampton councillors decided to press the pause button on the interconnected Downtown Reimagined project late last year.

A recent report from regional staff responds to that decision by calling for the official cancellation of the tender for a collection of water and wastewater infrastructure repairs and replacements in downtown Brampton.

The recommendation, which will go before Peel Region council on Jan. 10, its first regular meeting of the new year, follows Brampton council’s decision in December to pump the brakes on its streetscape and infrastructure work due to myriad lingering issues, particularly the unknown costs linked to uncertainty about a series of underground water diversion tunnels beneath the downtown.

“The Region is unable to proceed with award of the project without the city’s commitment to the project scope and proportional cost share. As such it is recommended that the project tender be cancelled,” the region’s report says.

The region has previously defended the city’s decision to delay the work, telling The Pointer in December that the work would progress when all the ducks were in a row.

“The Region is not disappointed with the recommendation made by Brampton Council. We understand and work together with our municipal partners on infrastructure projects. If a project changes scope, we work with them to decide on next steps,” said Anthony Parente, director of wastewater for the region.

Plans to replace aging underground infrastructure downtown began in 2011, with design work on new infrastructure to replace pipes that were nearing the end of their useful life. Brampton decided to piggyback on the project and undertake streetscape improvements and modernization of the city centre at the same time, to limit disruption. 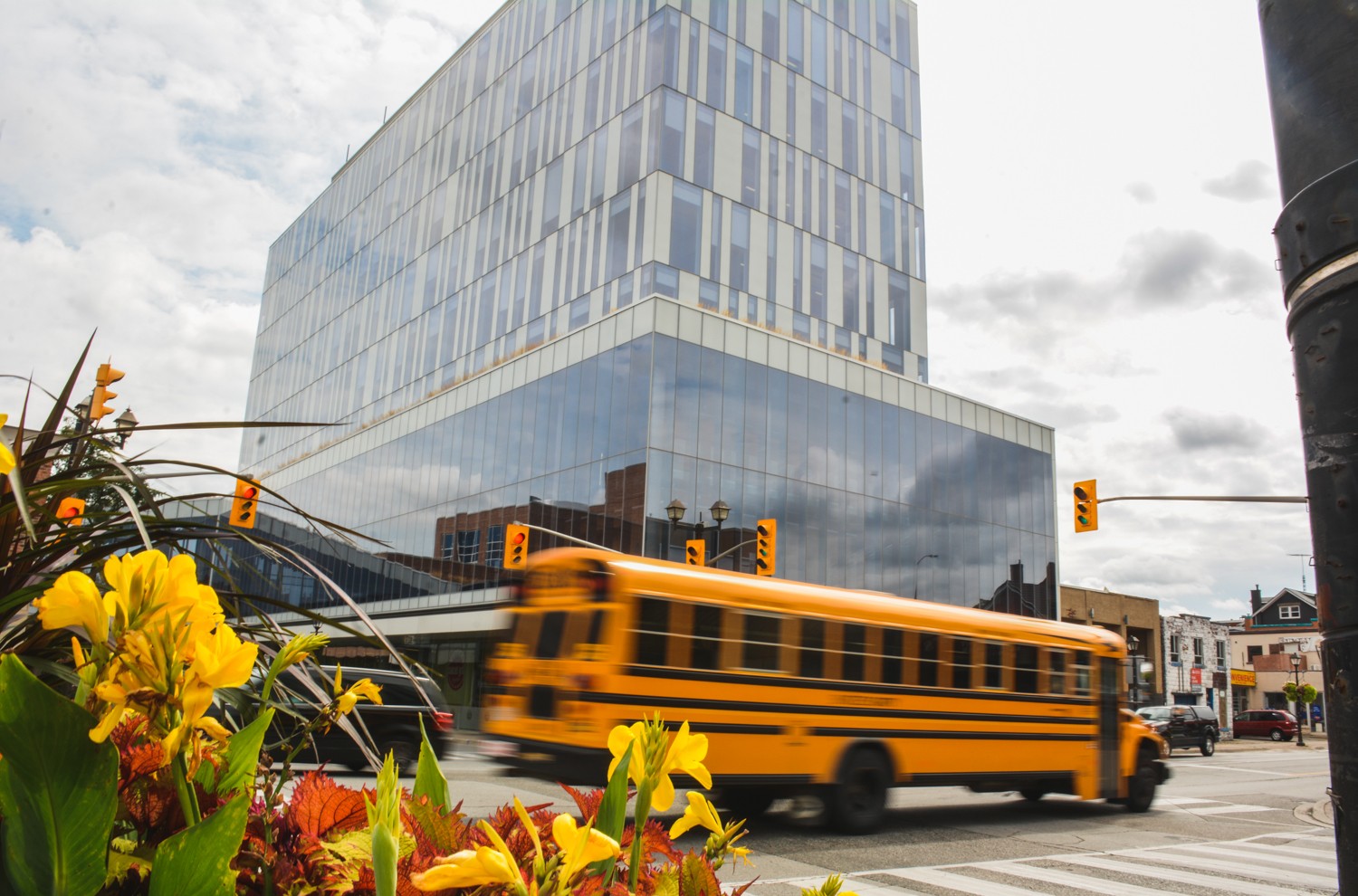 In August of last year, the work was tendered and four bids were received, with the cost set to be shared between the city and the region.

Those bids ranged from $55 million to $73 million; based on the lowest submitted bid, the city would be on the hook for $37.4 million, the region $18.3 million.

The final numbers caught city staff by surprise, as all of the bids came in well over the $28.9 million the city had budgeted for the project. On top of that, moving and repairing electrical utilities running through downtown may cost $25 million, of which the city is responsible for approximately 50 percent.

City staff pointed to several recent developments as additional factors in delaying the major revitalization effort, which had been slated to begin with major construction this year and continue up to four years.

The provincial cancellation of $90 million in funding for the Ryerson University satellite campus has thrown question marks over the future postsecondary institution in Brampton, and its associated centre for cybersecurity and centre of innovation.

City council’s recent decision to reprioritize the Main Street alignment for the future LRT also created unknowns. It contradicted years of planning for both Downtown Reimagined and the Brampton 2040 Vision plan, neither of which envisioned an LRT in that alignment.

While the delay will give council a chance to sort out the curveballs that have come their way, the decision could be more costly than moving forward right now.

By taking a pause on Downtown Reimagined, we will ensure that we do it right the first time and move forward in an efficient and responsible manner.

An infrastructure capacity review completed by Aecom in 2009 described the downtown area as “a particular area of note” and stated at that time, almost a decade ago, that the assets needed replacement.

“Many sewers within the downtown area do not have sufficient capacity for 10-year flows, as this area was developed prior to the current design standard,” the report said.

Brampton’s decision now has the region playing a waiting game, though there are plans to continue working with the city to expedite the process. However, no timeline for those discussions was provided.

“The Region does not have a timeline to report back on go-forward options,” Parente said in an emailed statement. “Our timing will depend on next steps the City has planned for downtown.”

The delay is a double-edged sword. While businesses are temporarily spared the burden of street closures and four years‘ worth of digging and scraping on the street, the delay simply pushes the project down the line, and with it the opportunity for downtown revitalization.

However, pausing this project will have a ripple effect, as major construction efforts all need to be rescheduled to reduce impact. Any delay in the streetscape and infrastructure work could result in a delay for future planned developments, of which downtown Brampton has many.

The pair of Ryerson University buildings involve big construction efforts if approved, and there are potential, large-scale residential projects like that planned for the previous Dominion Skate building.

“By taking a pause on Downtown Reimagined, we will ensure that we do it right the first time and move forward in an efficient and responsible manner,” Mayor Patrick Brown said in a release announcing the delay. Infrastructure work will probably need to be completed before any major redevelopment projects take place, to ensure there is the capacity to support increased jobs and homes downtown.

A rendering of the cancelled Downtown Reimagined project.

Additional residential units and additional bodies downtown, including a planned 2,500 students at the university campus, will only put more strain on the aging water system. City staff recognized this in their initial report to council.

Given the extent of the project and anticipated disruption, “it was considered critical for the Downtown Reimagined road and utility project to go first and be completed by the time the rest of the projects would be underway,” it reads.

Brampton will be seeing a lot of intensification in the years ahead, as the province’s growth plan requires municipalities to focus more on development within their built boundaries instead of expanding outward. Downtown Brampton has been designated an Urban Growth Centre, essentially a bull’s-eye for intensification.

Again, this should come as no surprise to city staff, as it was addressed in the 2009 study from Aecom.

“A key area in the intensification program for Brampton is the downtown core Urban Growth Centre (UGC). The Provincial Growth Plan identified the City of Brampton UGC as the third largest in the GTA, covering approximately 219 hectares and six municipal wards,” the document says.