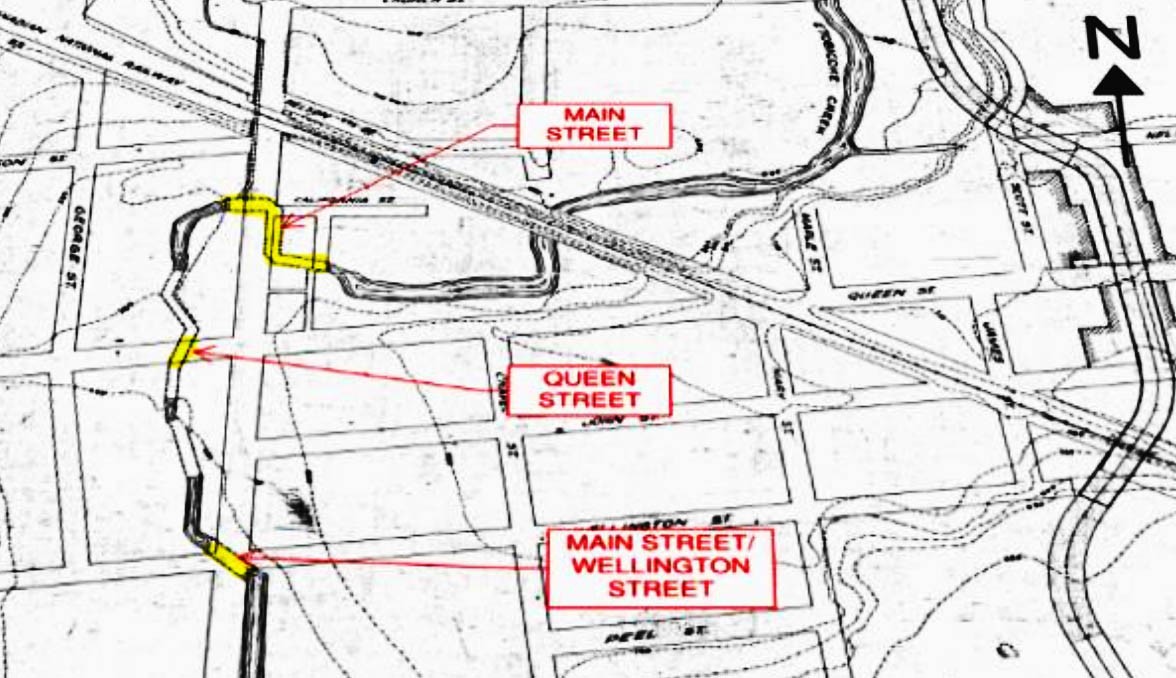 Graphics from the City of Brampton

Critical repairs to infrastructure in downtown Brampton have been cancelled, even though doing so increases the chance of catastrophic damage. City staff aren’t sure exactly where a set of old subterranean water channels runs beneath the city centre, making it impossible to start the work, although councillors directed them to investigate the 19th-century tunnels more than two years ago.

On Wednesday, councillors voted to go along with a staff recommendation to halt all of the work associated with the Downtown Reimagined project until the currently unknown costs of dealing with the historic channels can be accounted for. The extensive, $32.7-million project, which has been planned for more than two years, includes major streetscape improvements by the city above ground and essential infrastructure improvements below the surface by the Region of Peel.

Council directed staff to ask Peel Region to cancel the tender for the project.

The Reimagined project involves widening sidewalks, adding bike lanes, and extensively repairing and replacing regional water and sewer lines below the street level. Following a lengthy environmental assessment and tendering process, the project was supposed to begin in earnest in spring 2019, prompting road closures for three to four years in parts of downtown.

Staff’s rationale for the delay included a laundry list of fresh uncertainties around what will happen downtown, including council’s recent U-turn on the future LRT toward a Main Street route (something not envisioned in the Downtown Reimagined plan), and the revoking of provincial funding for the future university campus.

Until all of this is pinned down, it will be hard to move ahead with major infrastructure overhauls downtown, staff said. A change to any of these initiatives could affect needed infrastructure and pedestrian space.

These question marks are rather fresh, as the university funding was cancelled by the Doug Ford government on Oct. 23, and council brought forward the new LRT motion only last week. The root cause of the delay is the channel issue, an unresolved problem council and staff have known about for years.

The obvious question was not lost on Mayor Patrick Brown, who raised it with Jayne Holmes, the city’s director of capital works. “I think it’s important the public understand this curveball,” he began. “How did we not know this before?”

Brown added that long-time residents were aware of the tunnels running beneath downtown, which were built in the 19th century in the first program to divert Etobicoke Creek, but staff have garnered little information about them from city records.

“The extent of those tunnels and where they were located, we couldn’t find any information on,” Holmes said. No clear records appear to exist, making it difficult to figure out how to access the tunnels to learn more.

“You can’t just go indiscriminately and start digging holes,” she said, adding such work could jeopardize the foundations of nearby structures if not properly studied.

“There (are) some parts of the tunnel that are not accessible, and we’re going to have to do some more investigation to determine what needs to be done,” Holmes said. 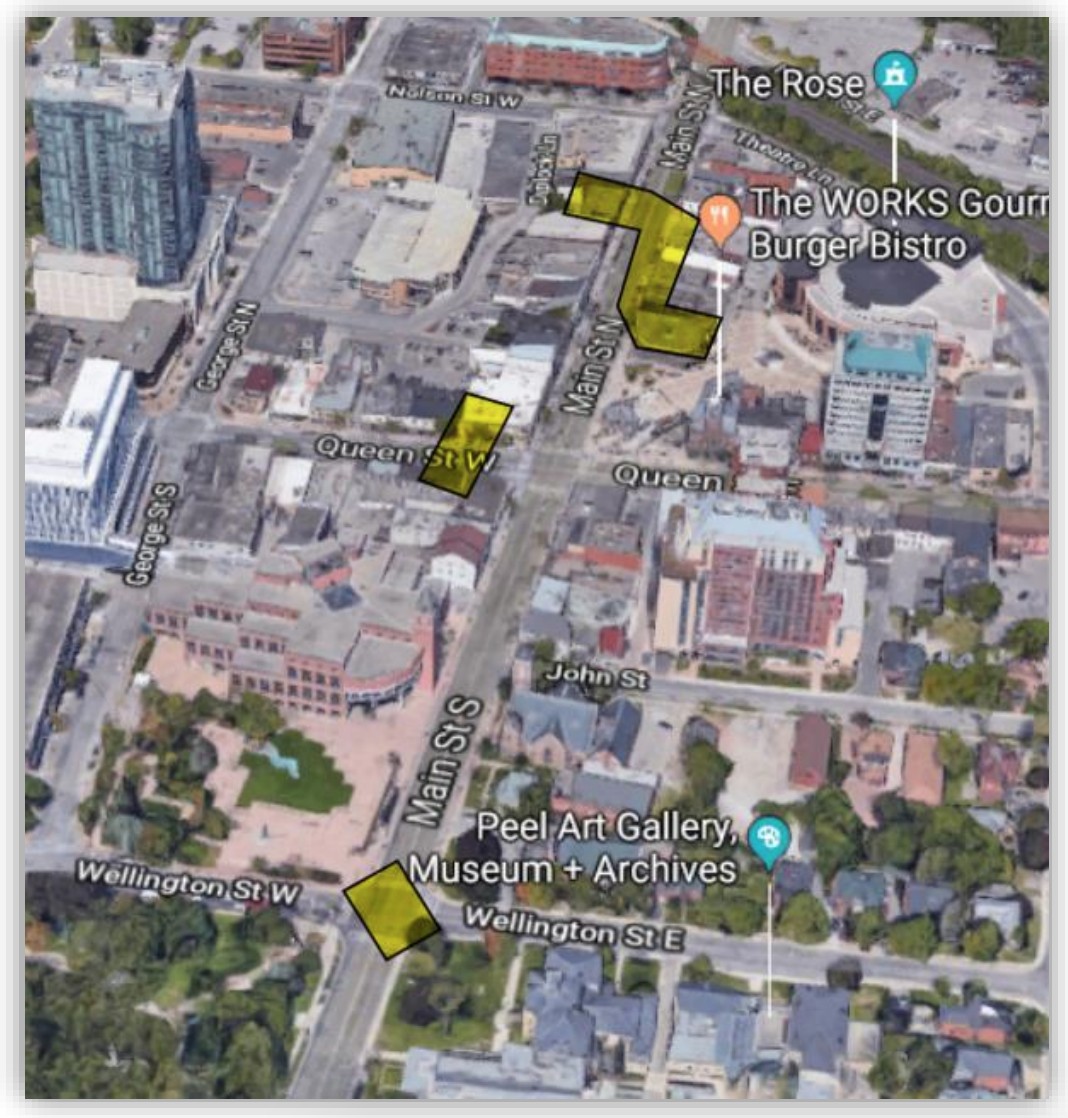 Underground channels, if present in the highlighted areas, would need to be removed in order to proceed with Downtown Reimagined work.

The city was digging boreholes under Main and Queen Street as late as August to figure out what work needs to be done on the tunnels to make way for the infrastructure improvements.

Council gave directions to look into the issue in May 2016, three months after the region approached the city about moving ahead with the infrastructure work.

Natalie Stogdill, a spokesperson for the city, told The Pointer study of the tunnels began in 2016.

“It has been an ongoing process because there is limited information available on its location and construction. There have been several on-site investigations over the last two years, with the last set of testing boreholes completed in the summer. More investigation is required in order to get certainty on any costs associated with the streetscape design,” she said in an email.

That seems to contradict statements on the city’s website that the investigation into the “structural integrity of the tunnel” began in February 2018, nearly two years after council gave the direction.

The cost of dealing with the tunnels is one of the larger unknowns when it comes to the final project’s budget. The $23 million initially estimated for Downtown Reimagined has grown to $33 million. But that may not be nearly enough, given that the four bids on the project ranged from $55 million to $73 million. The city could be on the hook directly for its part of the project for as much as $45 million, depending on which bidder is chosen.

The city is also contending with ballooning costs for installing utilities, originally estimated at $10 million and now at $20 million to $25 million. (The utility reimburses the city for half of those costs afterward.)

The city has not assumed any loans for the project so far, but according to Stogdill, it plans to do so when needed. To date, initial work on the EA and design have cost the city about $3.5 million.

Following the decision to halt the work, staff will work on a plan to wrap up the major ongoing issues in the new year. The probe of the tunnels will also continue.

Downtown business owner Rick Evans, speaking at the meeting before the decision, slammed the city for past inaction on reinvigorating downtown Brampton.

Evans told The Pointer the city needs to recognize that sometimes tough decisions, with potential negative effects, are necessary to move the city in a positive direction.

“I expect commitment, I expect unification, I expect fast action,” he told councillors. “I want to know that this council is committed to development (and) rejuvenating this downtown for the sake of 700,000 citizens.”

Councillor Martin Medeiros said council’s commitment is not in question, but with the new information at hand, councillors must ensure they’ll get value for the tax dollars that will be spent on the project.

“I don’t think today is about us supporting a downtown project or not,” he said.

A similar sentiment was shared by Councillor Jeff Bowman. “Everything we do needs to be measured, cost versus value,” he said, agreeing with Evans that council needs to measure all projects based on their future value to the city.

The delay in the region’s infrastructure work will expose the city to more debilitating water main breaks and other infrastructure failures, which happen more often in frigid temperatures.

Stogdill says the region will be monitoring for such incidents and has funding available for emergency repairs and placements region-wide.