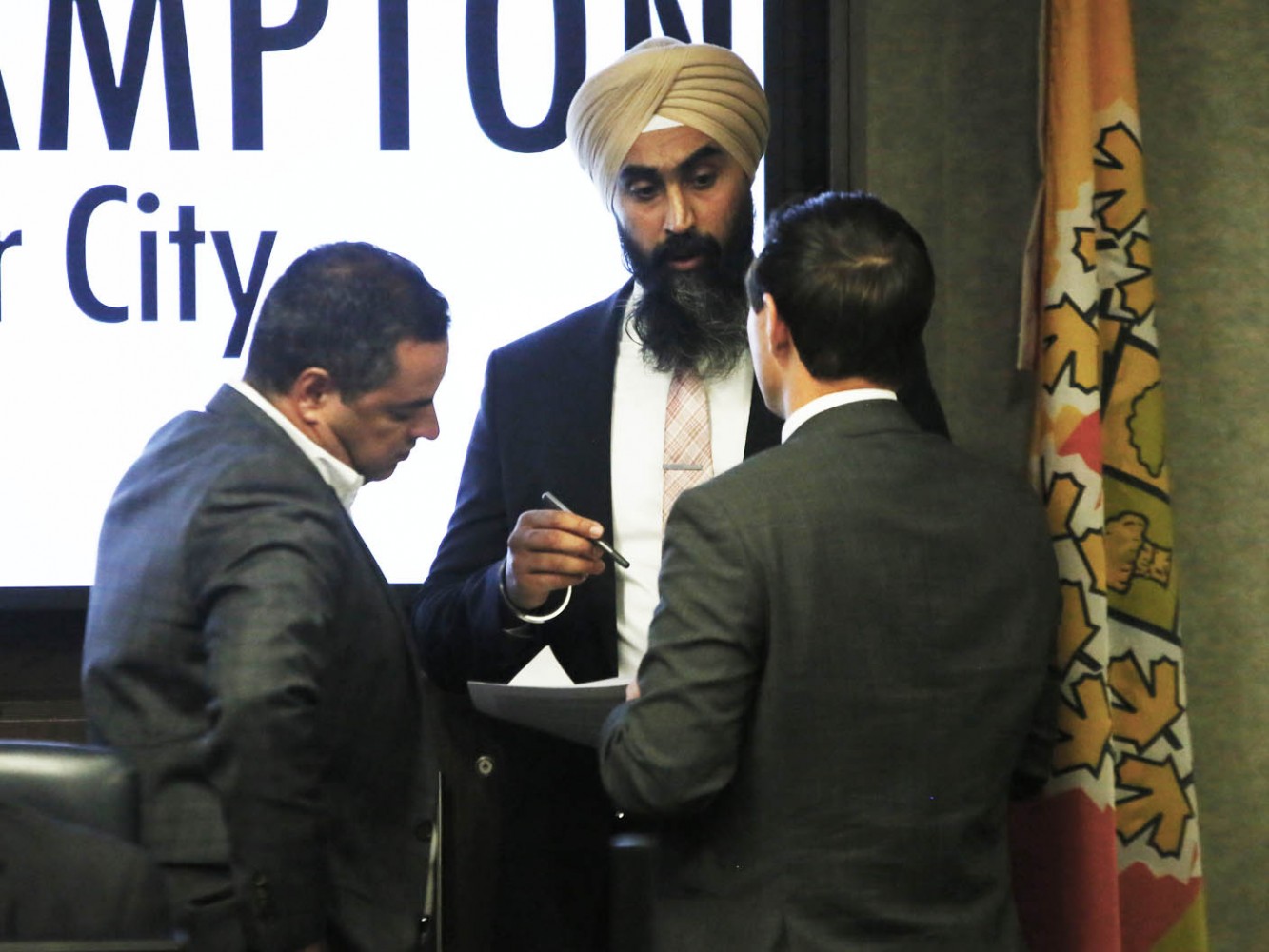 It was trial by fire for Brampton’s newest crop of councillors.

In their first committee of council meeting on Wednesday, councillors dealt with a laundry list of complicated issues, overshadowed by a heated debate on the future of light rail transit in Brampton.

They also dealt with whether to allow cannabis retail stores in the city and a motion that would allow councillors to double the size of their staff. There were closed-door discussions about the previous council’s decisions to sponsor the struggling Brampton Beast hockey team and to buy the Riverstone Golf Course lands.

Councillors couldn’t bring themselves to back a staff recommendation to allow cannabis retailers within the city, despite the results of a city-commissioned survey that showed more than half of residents support allowing retail shops when they can legally open on April 1.

Instead, council delayed further discussion until a special meeting in January, cutting it close to the provincial deadline for opting-out of retail stores, which the province has set as Jan. 22. If council doesn’t make a decision before the deadline, the city will be considered automatically to have opted in. If it opts out now, it could potentially decide to allow the stores at a later date.

Five Ontario municipalities have already signalled their opposition to permitting pot retailers within their city limits: Markham, Richmond Hill, Oakville, King Township and East Gwillimbury are likely to vote against allowing it.

According to the staff report, Environics, the company that conducted a telephone poll for the city on the cannabis issue, found that 54 percent of respondents sampled said they “strongly” or “somewhat” support pot shops in Brampton, while 40 percent “strongly” or “somewhat” oppose them. Only 6 percent of survey respondents were undecided. The company conducted the poll in the first week of November but the exact methodology for the survey—for example, whether it was weighted for factors such as age, ethnicity and neighbourhood—is not clear.

There are many “misgivings” in the community, Mayor Patrick Brown said, but the city is now in a challenging position to deal with the situation it has been dealt by the federal government’s decision to legalize pot.

It’s difficult to know in advance the full cost of allowing pot shops to open in Brampton, such as those associated with licensing and enforcement. Brown said the choice to opt in needs to come with full funding to support such a move.

“I think it’s fair to say, whatever the numbers are … the compensation that’s offered barely covers the costs that are going to be borne by the region and the municipality,” Brown said.

Starting in January, the province has announced it will split $15 million in funding among all Ontario municipalities to deal with the impact of legalization. Another $15 million will be split among municipalities who choose to allow pot shops within their borders. 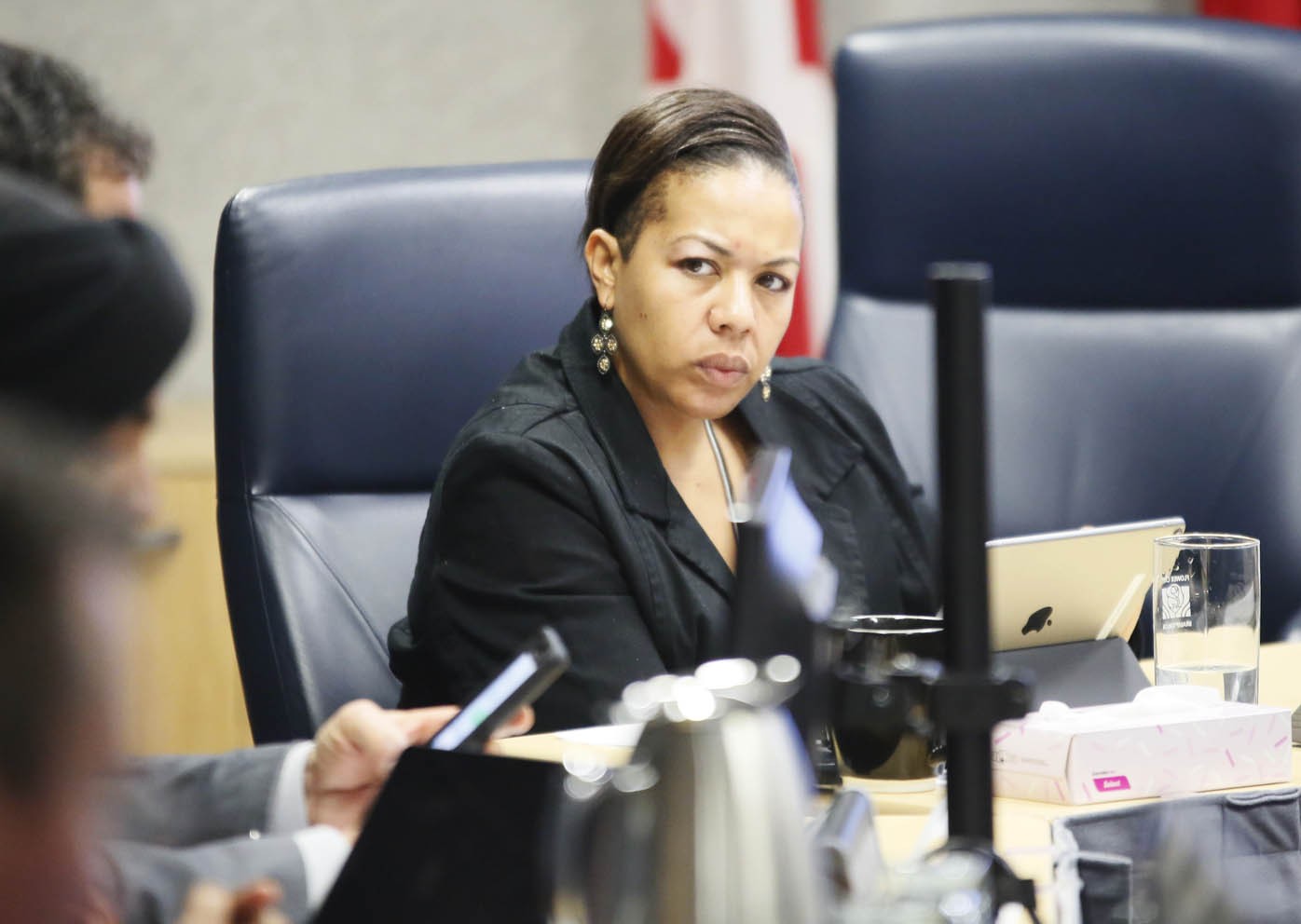 City of Brampton CAO Harry Schlange made it clear that funding was a concern because if the city doesn’t allow pot shops at the start of legalized sales, it could miss out on the initial wave of funding. So far, he said, the city has not seen a notable increase in calls to the city’s 311 line, bylaw enforcement, or fire department following cannabis legalization in October.

Councillors were also concerned with what happens in neighbourhoods if stores are allowed to open within the city. Newcomer Councillor Paul Vicente took issue with the 15-day timeframe residents would have to express their opinions about a chosen location for a pot shop in their area, noting that the window to do simply isn’t long enough.

He put forward a motion, seconded by Councillor Rowena Santos, to have staff form an outreach and communication plan by January, with the aim of informing residents about potential locations for retail stores.

“If there’s something we can do online that will facilitate that and make it easier for residents to engage with the city … and to alert them about these conditions,” he said, “I think this is something that we can do … for the community to empower them and give them a say.”

Staff agreed with the idea, but noted that the province will begin accepting applications for licensed cannabis retailers as early as Dec. 17.

A strong voice of dissent came from Councillor Charmaine Williams, who campaigned on a strong stance of opting out of retail stores, at least until the city can learn from the experience of other communities. She questioned the results of the poll, noting they seem to be quite a stretch from what she heard on doorsteps during the campaign: resounding opposition to these stores in Brampton.

Williams noted that council shouldn’t hurry this decision without having all the information at hand. “It’s about whether we want to rush into the new frontier without knowing most or all of the impacts it will have on our community,” she said. “Brampton would be better off without marijuana stores on every corner.”

Brown attempted to quell fears about potential problems, such as the potential for attracting crime, saying that a lot of “false assumptions” were being made in the community.

“It’s not a simplistic solution of liking or not liking marijuana in your community,” Brown said. He noted that, with online sales already taking place, cannabis will be present in Brampton whether council allows these stores or not.

Williams attempted to introduce a motion to have Brampton opt out of allowing pot stores, but it was pushed aside for a motion deferring the decision to a special meeting of council, to be called in January. 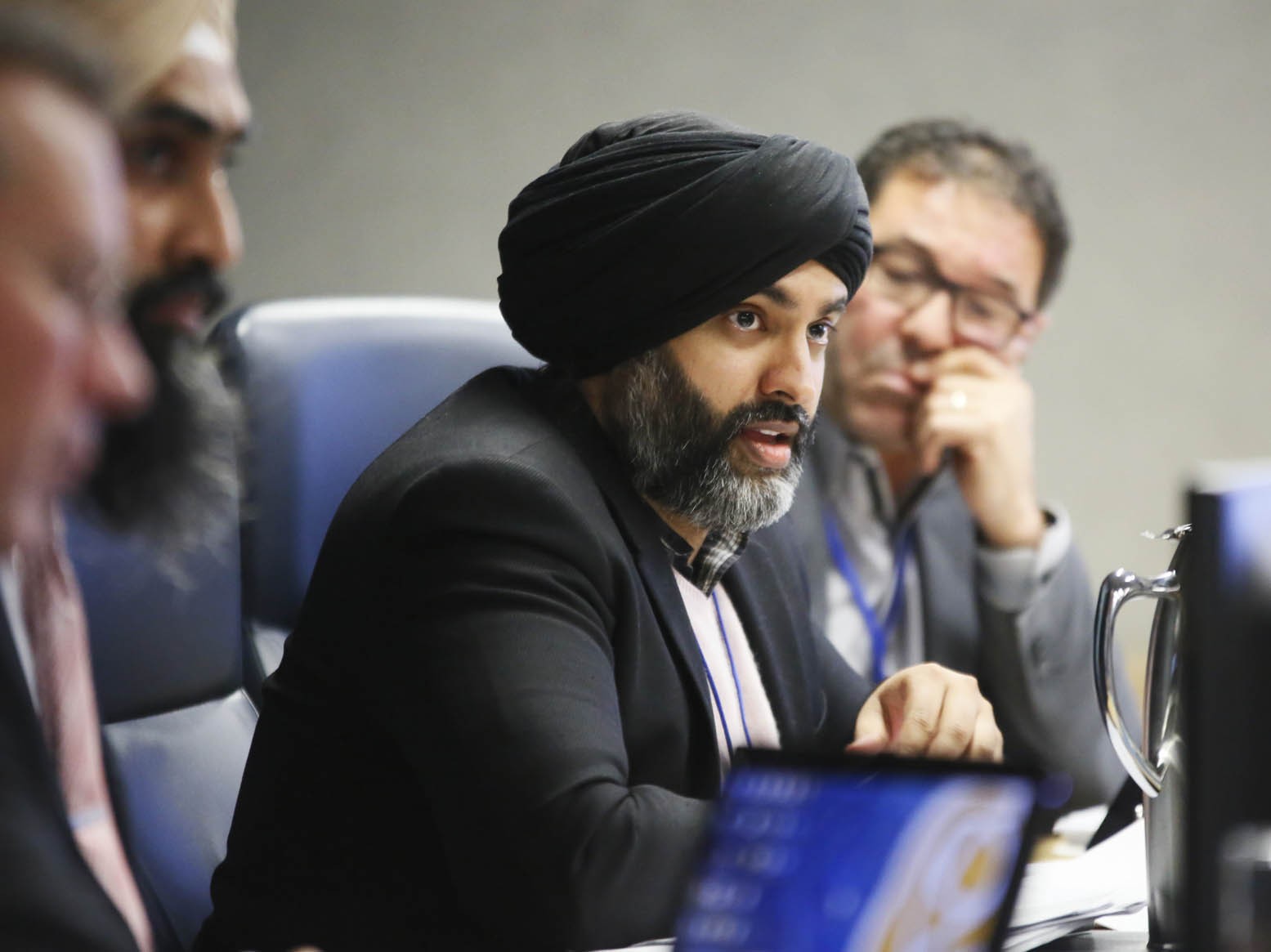 Two highly criticized decisions of the last term of council were also back on the table Wednesday, but residents who want to know what will happen with the city’s sponsorship of the Brampton Beast hockey team and the future of the Riverstone Golf Course land will need to wait a little longer.

Both items were brought back into discussion behind closed doors during Thursday’s meeting, and little was shared in the ensuing public session.

One thing we know is that council will be looking for a staff report on the Brampton Beast sponsorship, including details on the city’s return on investment when the contract wraps up in 2019. The item was placed on the agenda at the request of Councillor Harkirat Singh. The three-year, $1.5-million sponsorship deal to save the ailing Brampton hockey club was signed in March 2016, to a strong public outcry. As part of the deal, the city provides the team with $500,000 each year in sponsorship and advertising opportunities.

Even less was shared in regards to the Riverstone Golf Course, with councillors simply stating that direction was given to staff during the closed-door session. Because it deals with a land purchase, under the Municipal Act, council may keep those discussions under wraps. The item was placed on the agenda at the request of Councillor Pat Fortini, who was highly critical of the land purchase during the last term.

The Riverstone Golf Course clubhouse and associated land were purchased by the city in 2017 for $9 million, with plans to spend a further $2.6 million to convert it to a recreation centre. The purchase was made despite the lack of any public consultation on the matter. 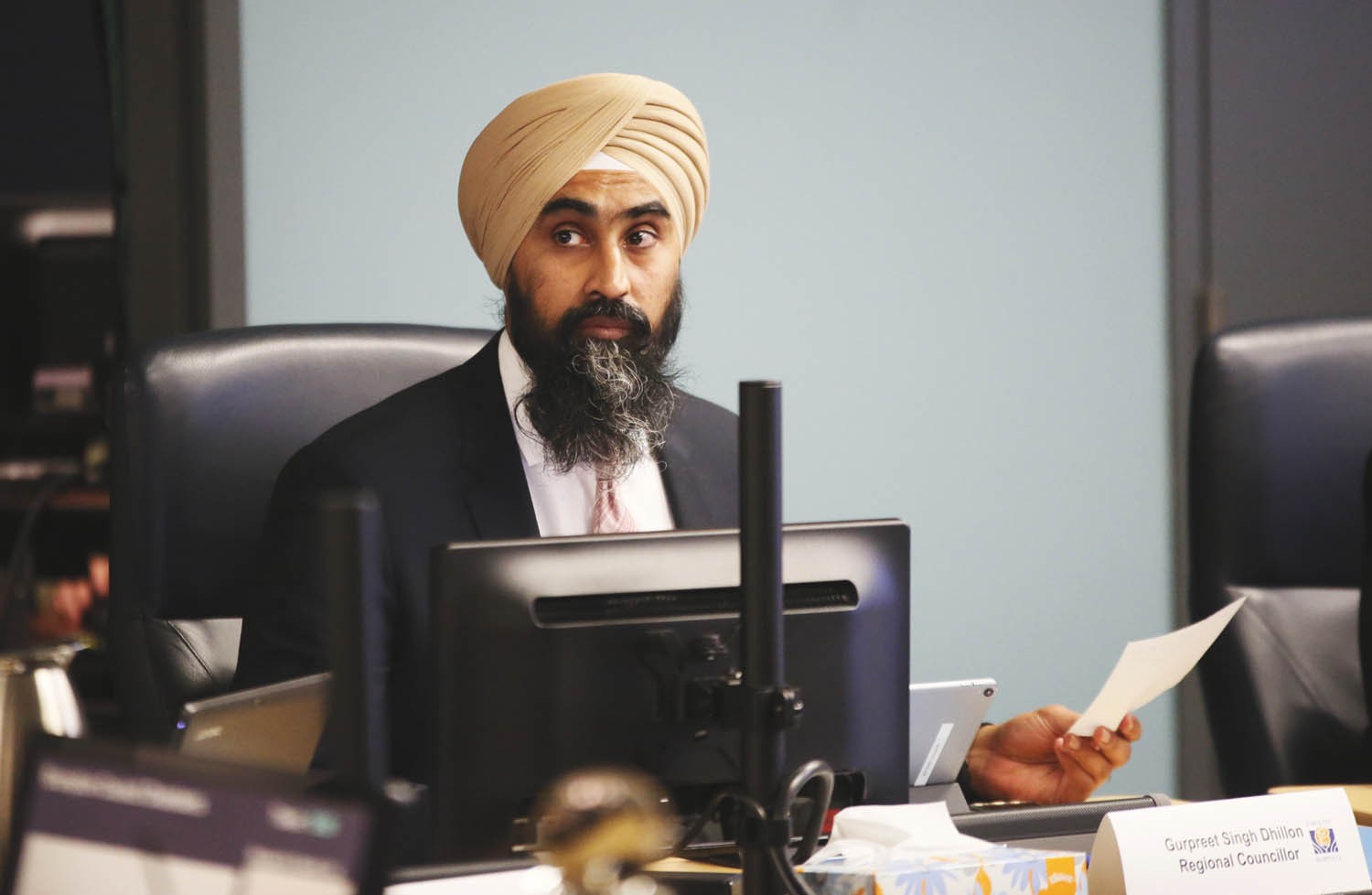 Given Brampton’s rapid growth, there’s no question local and regional councillors are dealing with an increased workload, thanks to the growing number of residents they represent.

For that reason, a report is slated to come forward from city clerk Peter Fay next week, outlining options for staffing models councillors could consider to help them manage their increasing responsibilities.

However, a motion from Councillor Gurpreet Dhillon suggested some councillors don’t want to wait. It suggested adopting a new “political model” for councillor staffing, effectively adding a new assistant for each member, doubling their staff complement.

“This is a modernizing of our staff model,” Dhillon said. “In my particular ward, we don’t have the capabilities to handle the number of calls that are coming in.”

Dhillon repeatedly pointed to Mississauga as an example. The proposed budget for Mississauga’s elected officials for 2019 is $5 million, with seven staff in the mayor’s office and approximately 34 full-time employees split among the 11 councillors there. Dhillon did not mention any other municipalities for comparison.

His proposed motion goes against the 2018-2020 approved operating and capital budget for the city, which recommends no new positions for councillors or the mayor’s office, with an annual budget of just over $3 million for 2019 and 2020.

No vote was taken on the motion, but the issue is slated to come back to council in January with staff recommendations.