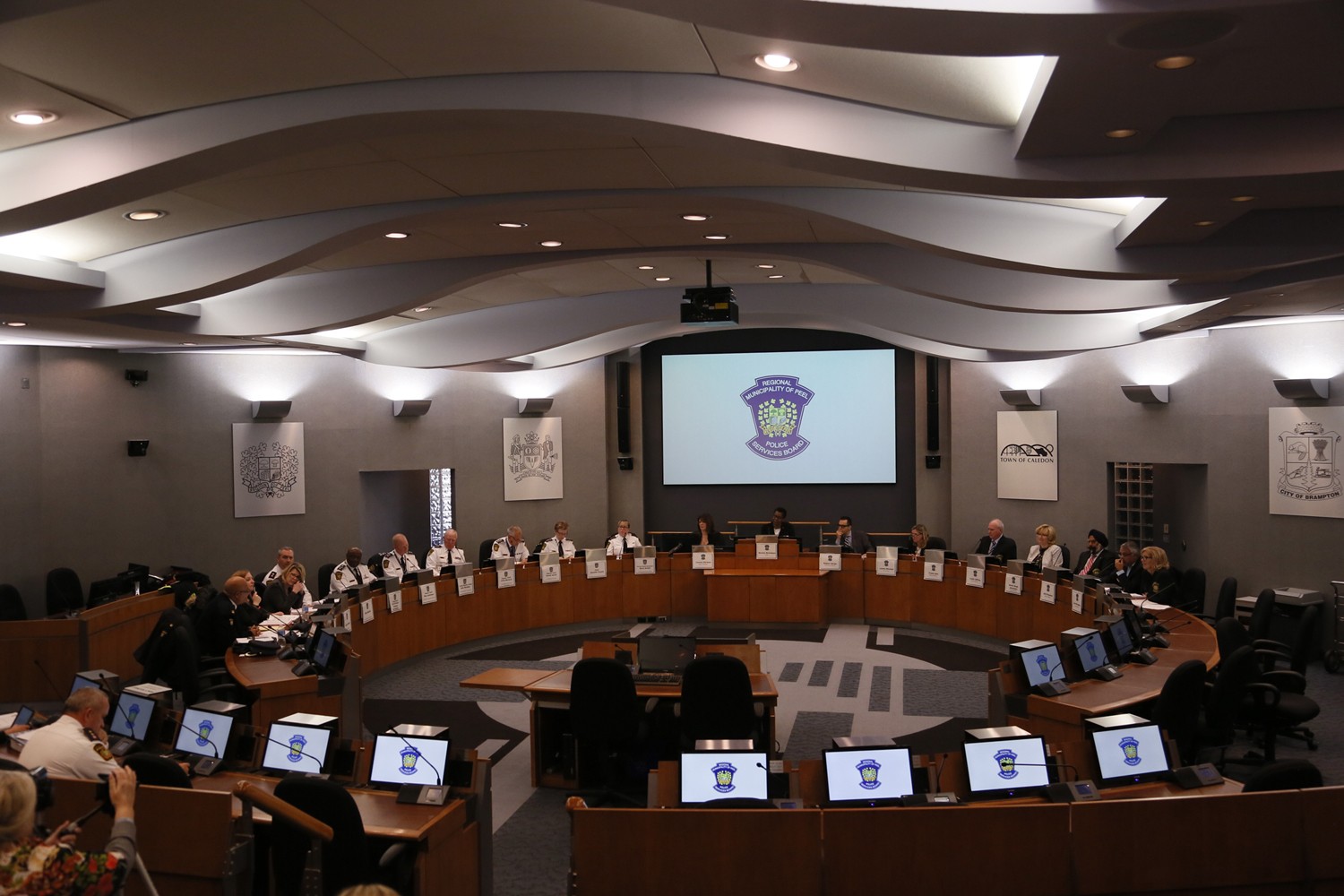 After waiting more than two years for the release of a report that would highlight the state of racial, gender and LGBTQ inclusivity in the police force, Peel residents learned Friday they’ll have to wait a little longer.

An equity, diversity and inclusion audit that has been in the works since it was requested in 2016 was expected to be released during Friday’s meeting of the Peel Police Services Board — the first since the municipal election and the last scheduled meeting of the year. Ranjit Khatkur, who led the charge for the audit two years ago, accused the board of deliberately avoiding release of details that many observers suggest will show the force has done a dismal job of welcoming diversity within its ranks and better representing the community it serves.

Community leaders were disappointed to see no mention of the audit on the meeting’s agenda when it was released mid-week. Khatkur, who leads the Peel Coalition Against Racialized Discrimination (P-CARD), delivered a scathing deputation at the board meeting, lamenting the late delivery of the agenda.

“In my experience, delays with posting agendas give a very clear message that the Peel Police Services Board does not want to engage the community,” Khatkur told the board. “It is [to] our absolute dismay that ... years later the report is still not public … . I know for a fact that the report was received by the board in April 2018, and yet the board, seven months later, refuses to make it public.”

The Pointer has obtained two separate sets of correspondence between Peel Regional Police and concerned parties. One says the report will be released sometime this month, while the other provides the more precise date of Nov. 23. 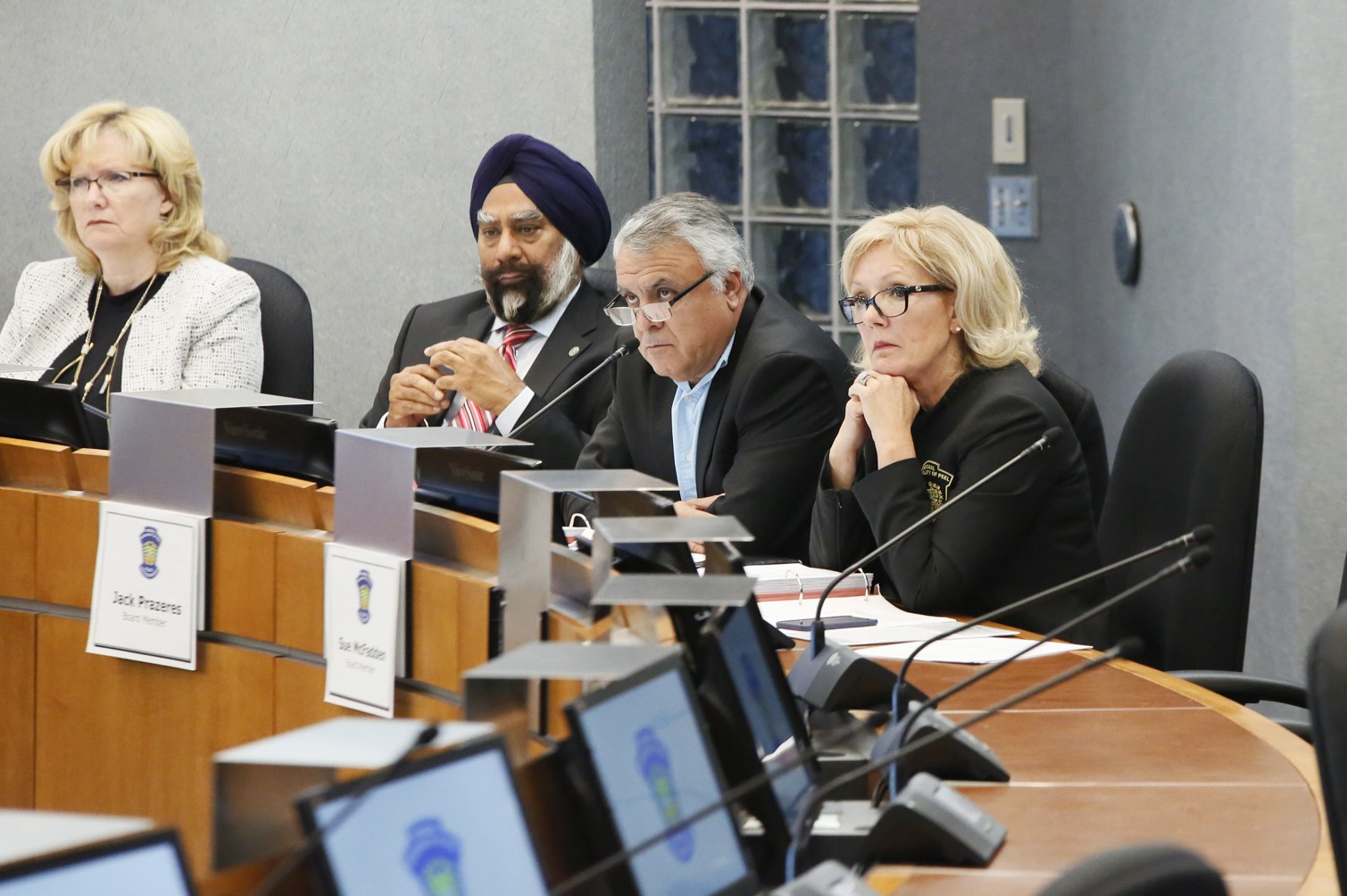 The Pointer reached out to Robert Serpe, executive director of the police board, to explain why the report’s release is being delayed. Neither he nor his office provided a comment by publication time.

The board remained mum on the audit issue during the meeting, focusing instead on routine agenda items such as the police budget. Board chair Norma Nicholson apologized for the delay in the agenda’s disclosure but said nothing about the equity audit following Khatkur’s comments. Chief Jennifer Evans declined to comment when asked by The Pointer about the delayed release.

The audit was to look deeply into the PRP’s diversity and equity practices in hiring, promotions and policing techniques.

Khatkur, who in demanding the audit in June 2016 called out Evans for myriad missteps, said, “We feel that Peel police [have] to acknowledge that there is racism before they’re willing to do anything about it.”

The same month, a leaked internal email showed that Staff Supt. Randy Patrick had accused her of inciting “hatred” against the police.

“I was present for the deputation and as a Peel Regional Police officer was offended by the comments of Ms. Khatkur. Her comments were extremely disrespectful of the Chief and our organization,” Patrick said in the email.

Evans closed ranks with Patrick, calling Khatkur’s comments inflammatory, false and disrespectful, signalling the police service’s resistance to calls for change. Evans also attacked then-board chair Amrik Ahluwalia in a letter in which she told him, “You took no steps to stop a disrespectful tirade in a public setting and in the presence of senior members of the police service.” 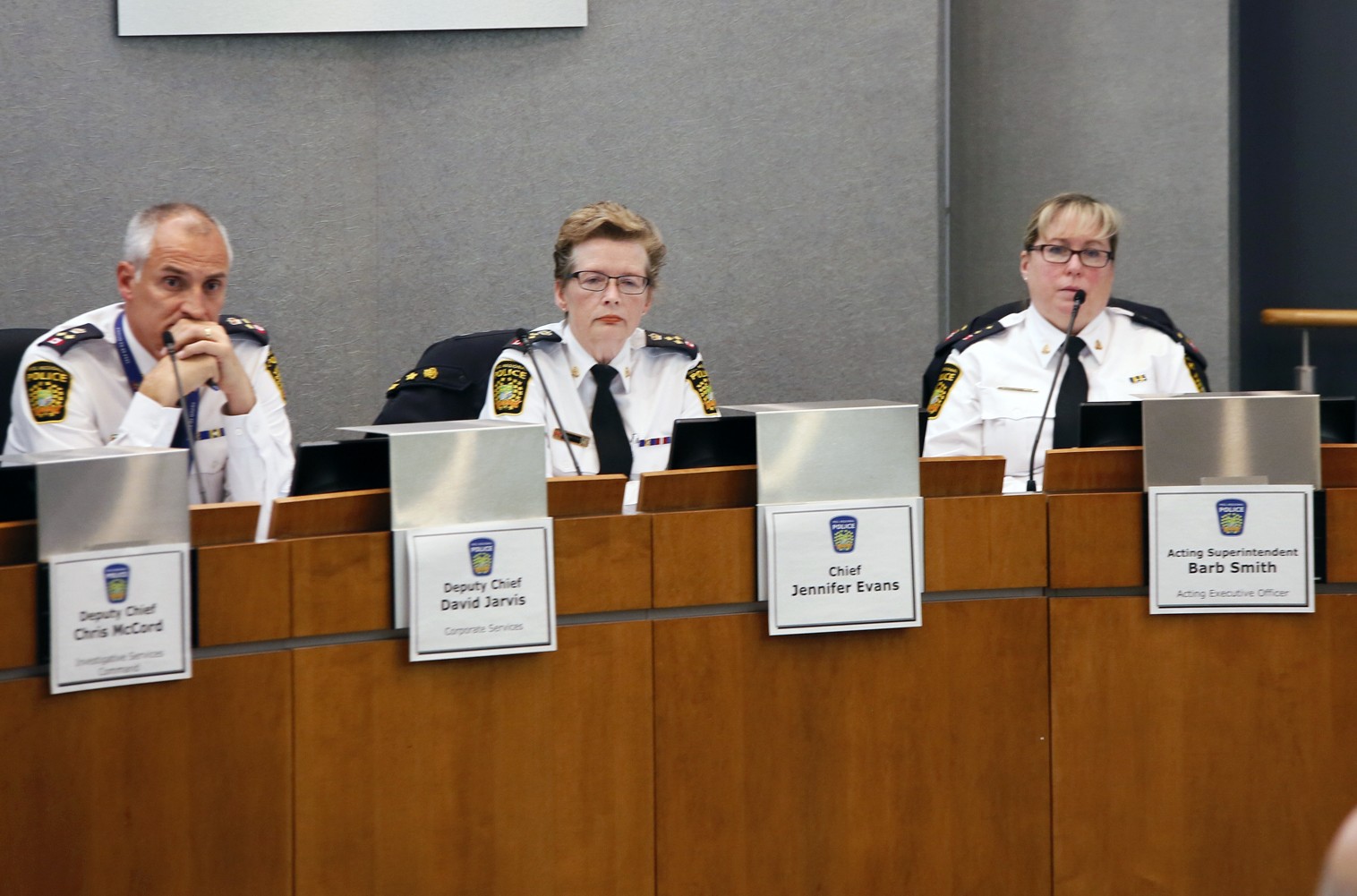 That same month, senior officers called on Ahluwalia to resign his position as chair in a letter obtained by the Toronto Star. “We have seen the Chair of the Police Services Board continue to make demeaning and insulting comments directed towards Chief Evans and this organization,” read the letter.

Brampton Mayor Linda Jeffrey, who was present at Friday's meeting, came to his defence and said, “Chair Ahluwalia continues to have my full support and confidence as well as that of the entire Police Services Board.” Jeffrey, soon to depart her role on the board along with the mayor’s seat, was present at Friday’s meeting but said nothing about the audit.

Critics of the Peel police had factual evidence to back up their claims.

A Toronto Star investigative series around the same time showed that black Canadians in Peel were three times more likely than white residents to get “carded” — randomly asked for their personal information by police outside of a crime investigation. More recently, Evans has claimed, without citing evidence, that the recent spike in crime in Peel is the result of the curtailing of street checks by the province in 2017, further alienating PRP from from minority communities.

A community survey commissioned by Evans in the summer of 2016 found, in talking with focus groups, that Peel police do not “reflect” the community they serve. Even though the survey undersampled minorities, as the Winnipeg research company that carried it out acknowledged, its report urged the force to “increase diversity of officers ... to reflect the diversity within the community.”  Evans did not address that point at the time the survey was made public.

In 2014, Det. Sgt. Baljiwan (BJ) Sandhu submitted a complaint to the Ontario Human Rights Tribunal alleging that he was passed up for promotion because of his South Asian heritage. The subsequent hearings highlighted what some observers described as a culture of racism within the force, citing examples of inappropriate comments and stereotyping.

Despite police resistance to calls for reform, the move to go ahead with the audit was endorsed by Jeffrey and Mississauga Mayor Bonnie Crombie.

In her January 2017 open letter to the board, where she revealed she would depart from her position on the board, Crombie said she still supported the audit and that “it is imperative that citizens feel they see themselves in their police force.” Crombie is widely expected to return to the board with the next council term, which begins Dec. 1.

In April 2017, the board hired the Canadian Centre for Diversity and Inclusion to conduct the diversity audit.

Evans did not respond to questions about Khatkur’s contention that the report was essentially completed months ago but not released publicly. The chief announced in October that she would retire on Jan. 11, 2019. Observers have suggested her decision was the result of mounting allegations of poor leadership and even misconduct.

Residents will have to wait till the new year — when a reconstituted police services board begins its work — before getting a look at the report or an inkling of who will take over the top job at Peel Regional Police.