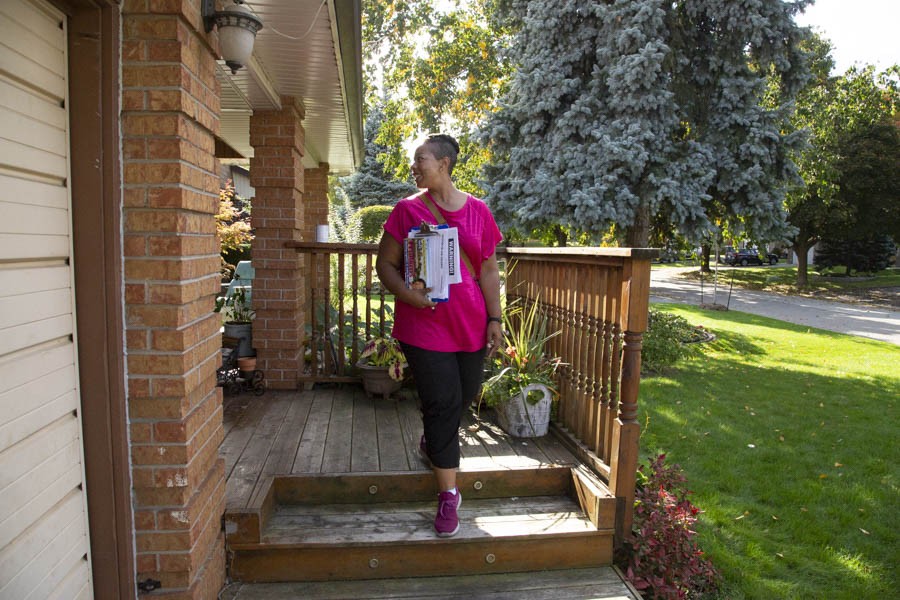 Municipal elections tend to favour the status quo, for the simple reason that incumbents possess the name recognition, the connections and often the leg-up on fundraising that typically lead to success. Council members can spend years, even decades, warming a council seat without facing a significant challenge at the ballot box.

For newcomers, especially those who violate most elements of the political stereotype — older, white, male, and well-connected — the path to election is much more difficult. Small wonder that Brampton’s municipal council resembles the city of 20 years ago much more than the diverse, young, urban city of today.

Yet, there are challengers — ambitious, determined and often passionate about making a difference on local issues — willing to take a risk and prepared to burn shoe leather going door-to-door in hopes of becoming a game-changer.

An example in this year’s campaign is Charmaine Williams, a 38-year-old mother of five with a background in mental health therapy, one of nine city council candidates in Wards 7 and 8, hoping to replace incumbent Pat Fortini, who is running for the regional councillor position. She’s black, female, not exactly a household name to her would-be constituents, not connected to developers or other powerful interests. But hers could be the face of a more diverse city council of the future — deeply rooted in Bramalea, where she grew up, and knowledgeable about the issues her neighbours face.

A cruel and potentially deadly twist of fate risked unravelling Williams’ bid for political office before she ever got the chance to run. About a year ago, she developed a severe brain hemorrhage six days after giving birth to her youngest son. She suddenly lost a dangerous amount of cerebrospinal fluid, causing her brain to herniate—a condition in which brain tissue is deformed by pressure inside the skull—and had to be hospitalized for days.

“Last year they (the doctors) said, ‘You’re not able to able to walk.’ I was in a wheelchair and I was using a walker,” Williams said, recalling the ordeal of her recovery.

Life, however, did not pause. She realized quickly that she would need to get better quickly and be there for her family.

“I had to get up. I had get up because I have my kids to take care of. I had to get up—I’m just that determined to keep moving. It’s funny, because they (friends and family) said, ‘You’re not going to run, you can’t run for council.’ I said, okay … and I registered.”

A glimpse into Williams’ family history offers a sense of where that stubborn determination comes from. Her grandparents, born in Jamaica, were part of a generation of migrants to the United Kingdom who have changed the face of that country.

Her paternal grandparents were on the Empire Windrush, a British passenger ship that brought one of the first waves of Caribbean migrants to Britain. The nearly half a million West Indian migrants who arrived between 1948 and 1970, among them Williams’ father (who came to England after his parents), have been dubbed the Windrush Generation.

Her grandparents “were complaining about the food on that boat. My grandmother—she is a very strong woman—linked up with the (ship’s) chef and said, ‘No, we need to change up the way we cook for them …’ She taught them how to cook and how to make rice and peas,” Williams recalls, her pride about that episode evident in her voice.

After a two-week journey aboard, her grandparents struggled to carve out a life for themselves in England. Her grandfather worked as a carpenter, her grandmother as a seamstress.

Tensions between the white population and Caribbean newcomers sometimes boiled over into open race riots, but Williams’ family somehow made a life for themselves. Her parents met in the early ‘70s and she was born in 1979. A year after that, her father saw opportunity in Canada, so he moved the family to Bramalea, now part of Brampton, east of Highway 410. She and her family have lived there ever since.

Canvassing has been a relaxed affair for Williams, who says she feels at home talking to residents in her hometown. She speaks of Bramalea as though it is a separate and distinct society within Brampton. She’s not alone in holding that notion. 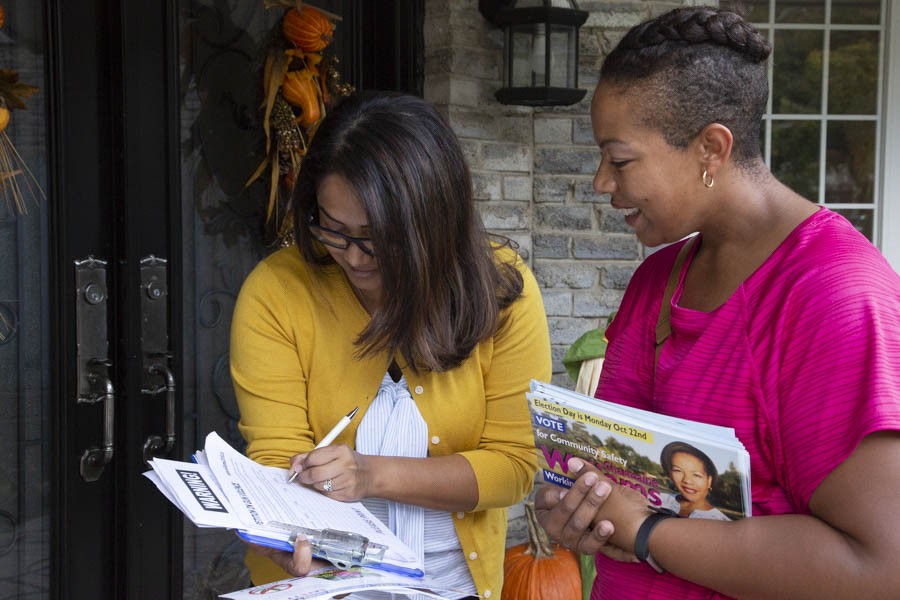 “I’ve been in Bramalea since 1980 … Bramalea became our first home. That is how it has been for many residents in Brampton, especially newcomers and new immigrants from England or the Caribbean. That’s where they know their first home to be; it’s Bramalea.”

One day, The Pointer found her cutting a path through a neighbourhood in Bramalea’s L section, a collection of neighbourhoods directly northeast of the 410 and Queen Street East.

She’s dressed in a pink blouse, with comfortable running shoes on her feet. “Don’t worry, I’m not trying to sell you anything,” she begins as she stops two mothers walking their kids in strollers. The tongue-in-cheek intro works every time, making everyone she talks to putty in her hands. Residents wary of a stranger approaching them near their homes soon seem excited by and pleased to talk to the affable Williams.

“What makes a community run is the people, and if you don’t treat the people like they are the most important piece to the community, your community is really going to lose its sense of morale,” Williams says.

Once she has their attention, Williams is soon running through the points on her platform, her biggest focus being on public safety, a particularly grassroots issue in this election cycle for Brampton’s minority communities.

Williams has proactively put up yellow signs near schools that say: “Please slow down, kids are back at school.” On her website, PleaseSlowDown.ca, she has made it easy for parents with school-aged children to order such signs for free.

Her biggest concern has to do with the availability of guns in her ward. She is a strong advocate for annual gun buybacks as a fixture in the city, a program whereby the city gives residents cash for turning guns over to police. Her petition calling for the program currently has roughly 2,700 signatures. She decided to take on the issue last July, when there was a rash of shootings in Brampton.

“Anything to help our community to become a safer community in Brampton. The fact is, we are growing. We are a large city now. We have to look at strategies that larger cities use to help effectively decrease crime in their cities.”

Gun amnesties, which are distinct from buybacks as they do not include a cash incentive, are not unheard of in Brampton. Peel Regional Police have held them in 2017 and 2018.

Although programs such as gun amnesties and buybacks are well-intentioned, residents are often hesitant to participate, in part because they don’t allow people to turn in guns anonymously. Peel Regional Police said clearly during their April 2018 amnesty that “weapons cannot be turned in anonymously.”

Williams said she’d like the program to allow anonymity. “You want people to feel safe to bring in their firearms and not feel like there are going to be consequences for having them in the first place .... People usually don’t even report crimes for fear of being caught up in legal wrangling.”

Bailey, one of those challengers, doesn’t agree with Williams on the amnesty issue. “Peel Regional does not pay for guns in their gun amnesty program, because it’s shown that it doesn’t work. So why would they do something they know doesn’t work?” Bailey said, without further clarification. Instead, she wants police to engage in year-round amnesty programs.

There is debate about the efficacy of gun amnesties. Experts have said guns turned in are often antiques or guns in disrepair that are unlikely to be used in crimes anyway.

Williams counters, “My concern is with the amount of break-ins we have in Brampton. People know what they are looking for. We also know that many guns used in crimes in the GTA are stolen guns. So I want to just give our community in Brampton an opportunity to actively be a part of the solution.”

Williams’ public safety plan is not limited to the buyback. She says police also need a more  robust program to deal with mental health crises as part of any push to reduce crime. For almost 20 years, she has been working in children’s mental health, behavioural therapy and multisystemic therapy-- a therapy model that seeks to make positive changes in social systems through communities and families.

“I do know that there are many different factors that drive an issue or drive a concern, and it is up to me as a therapist and as a person who parents come to, to understand those specific drivers.”

Whether Williams succeeds in today’s election or not, her presence on the ballot and that of others like her bodes well for a city that will need much more diverse leadership to meet the challenges of the future.