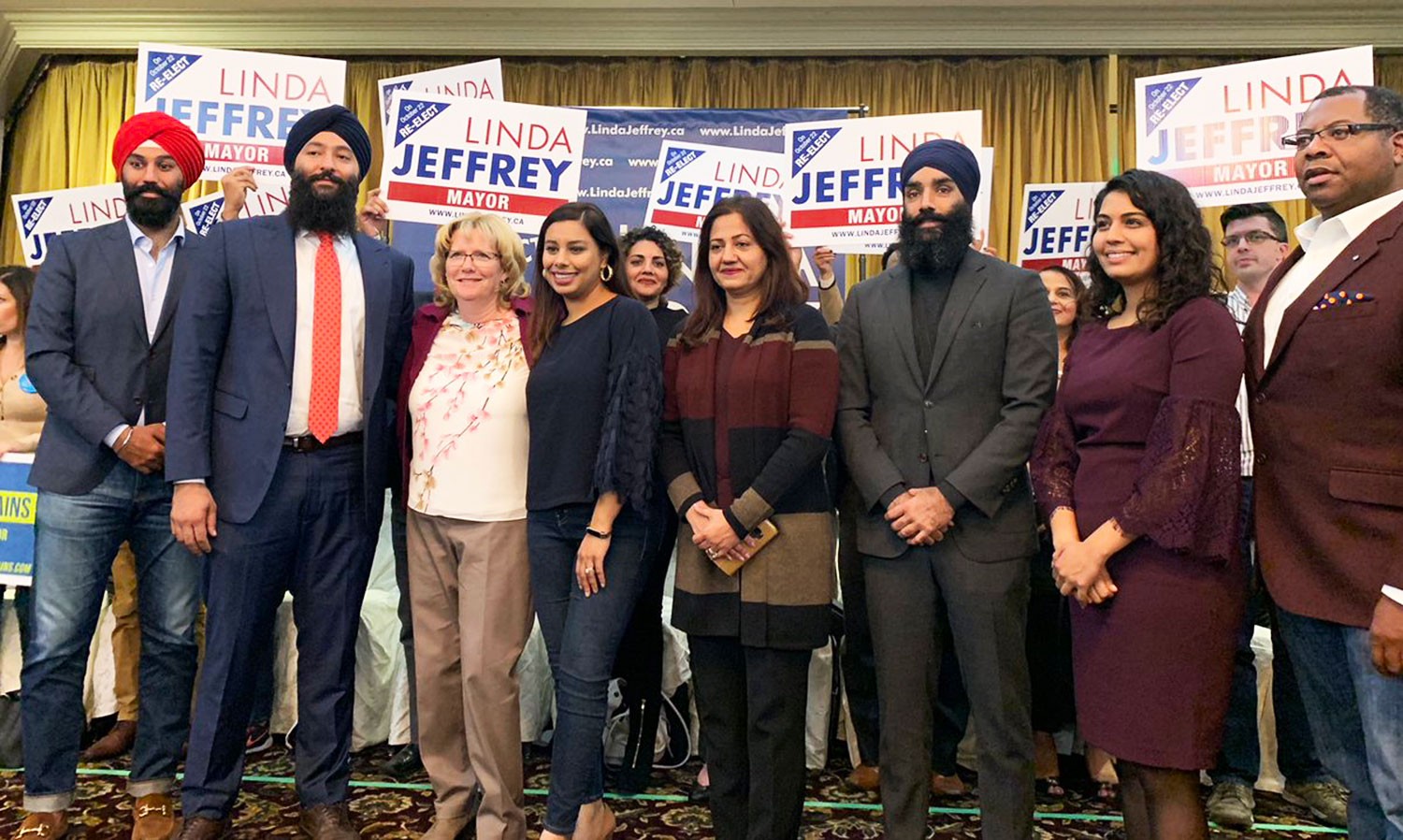 Photos courtesy of Linda Jeffrey's campaign and by Joel Wittnebel

Jeffrey’s latest win in the endorsement battle comes in red, blue and orange

In a tightly contested race for Brampton’s mayorship, incumbent Linda Jeffrey looks to be gaining some political capital from all levels of government, earning the support of MPs and MPPs of all party stripes.

Jeffrey told The Pointer the show of support from political colleagues illustrates what she has done for the city.

"Politics is about getting results for your community," she said. "In the more than two decades of representing people in Brampton as a city councillor, member of provincial parliament and mayor, I have worked hard on delivering for our community. During that time I have worked with representatives of all different political stripes to advance Brampton’s interests. I am proud of the work that I have done and the results that have benefited our community. I am grateful of the support and recognition that I have received from across the political spectrum. It is a true testament that respect, hard work and a commitment to one’s community does get recognition.”

Yarde tweeted after his formal endorsement: “The choice for mayor of Brampton we are all in agreement there is no orange red or blue @LindaJeffrey is the right choice we want to go forwards not backwards".

The collection of political firepower appeared in a tweet from Jeffrey thanking the group for their endorsement. The pat on the back for Jeffrey is the latest in what appears to be an ongoing endorsement battle between her and top contender in the mayoral race Patrick Brown, who last week made waves with the announcement that he has earned the backing of political heavyweight and Brampton legend Bill Davis, Ontario's former premier who previously supported Jeffrey in 2014. 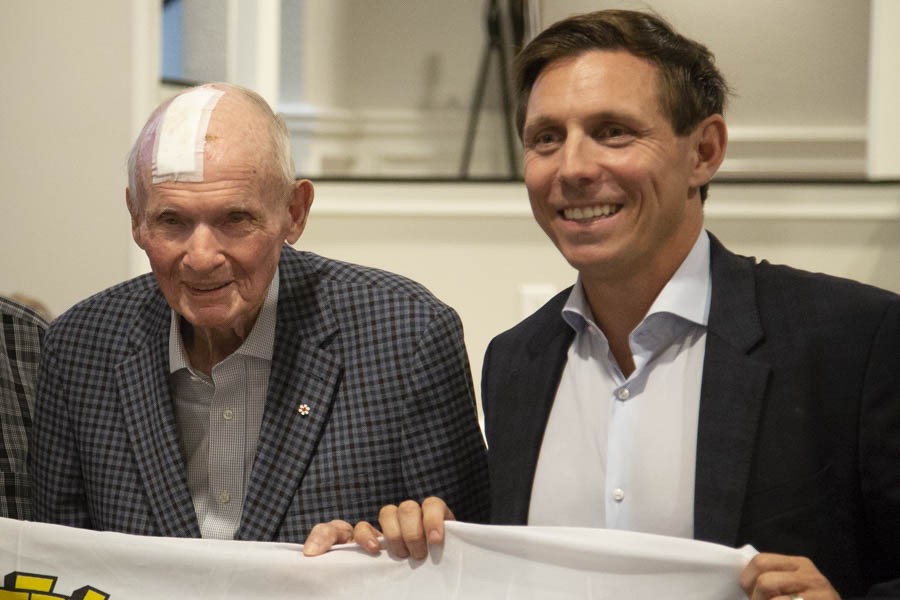 The support from Davis seemed to come in response to another surprise endorsement announced by the Jeffrey campaign days earlier.

Jeffrey, a former provincial Liberal cabinet minister, tweeted out photos of herself on Sept. 26 alongside Progressive Conservative Party influencers Richard Ciano, Ken Zeise and Michael Diamond. Ciano and Zeise are both past presidents of the PC Party of Ontario.

“Enjoyed a wonderful evening at the Albany Club chatting with former #PCPO Presidents @richardciano and @kenzeise in support of my Mayoral campaign,” Jeffrey tweeted. 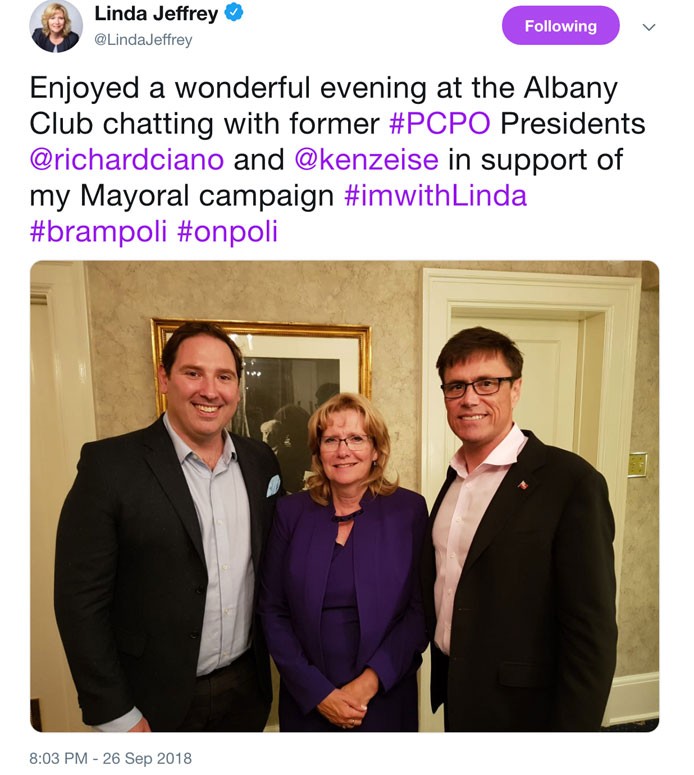 On Oct. 9, Brown fired back with the Davis endorsement, while at the same time questioning Jeffrey and her new ties to the PC Party.

“Whatever arrangement Linda Jeffrey has with Queen’s Park, she would have to explain that. I’m not looking at any agreements with Queen’s Park or Ottawa. I want to be able to criticize and advocate freely, and free of the constraints of any arrangements,” Brown said at the time.

However, the endorsements for Jeffrey from Ontario’s blue-blooded elite could be further evidence to a widespread belief that Brown’s relationship with the party he previously led is in tatters, a reality that some voters have expressed could hurt Brampton in the long run.

That hasn’t stopped some of Brampton’s retiring council members from tossing their backing behind Brown. Councillors Gael Miles and Elaine Moore, two of Jeffreys’ strongest critics on council, have been active supporters for Brown.

The concept of political endorsements and their ability to win the favour of voters come election day is not certain, but in Brampton’s mayoral race, which has clearly been a two-person contest since early campaigning began in August, every little bit of sway could prove to be the difference as the city enters the final week of campaigning before the October 22 vote.

Jeffrey had a slim lead over Brown early on according to a late August poll The Pointer commissioned, carried out by Forum Research, which conducted an exclusive survey of 999 voting-age Bramptonians that showed Jeffrey held a lead among committed and ‘’leaning’’ voters with 41 percent support, compared to Brown’s 33 percent.

The numbers suggest that things are still up in the air ahead of voting day. However, there could be more endorsement calls made ahead of the final vote, possibly from the other five mayoral candidates who could concede an early defeat and toss their backing to one of the two front-running candidates.

According to the The Pointer commissioned poll, the remaining candidates in the race divide up about a quarter of the decided and leaning vote, with veteran council member John Sprovieri at 10 percent; Wesley Jackson, six percent; Bal Gosal, five percent; Mansoor Ameersulthan, three percent; and Vinod Kumar Mahesan, at two percent.

Should any of these candidates decide to support Jeffrey or Brown it might end up being a determining factor on October 22. With such a large percentage of undecided voters (37 percent of the poll respondents said they had not made up their minds when asked who specifically they would vote for at the end of August) the race could still be up for grabs, a week out. Among decided voters, the margin in The Pointer poll was razor thin, with Jeffrey at 24 percent and Brown at 23 percent.