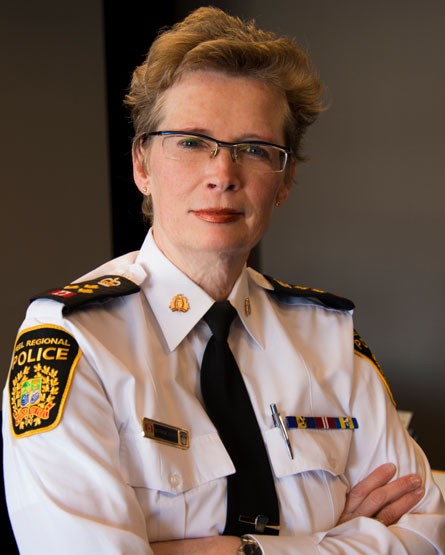 Peel Police Chief Jennifer Evans to step down in January

The woman who has led the third largest municipal police force in the country will be stepping down in January, following a controversial tenure as Peel’s chief. Jennifer Evans notified staff Friday that January 11 will be her last day on the job.

Her announcement comes two months after the board that oversees her approved a police watchdog investigation into possible misconduct by Evans following the poorly handled case of three Mississauga family members found dead years apart.

She sent the following memo, Friday, which was obtained by The Pointer:

“Today I notified the Police Services Board of my intent to retire.  My last working day will be Friday, January 11, 2019.

For thirty-five years I have proudly served the residents of Peel Region as a police officer, including six years as your Chief of Police.  I continue to be inspired by the hard work and dedication of the men and women of Peel Regional Police and I firmly believe that we are the best police service in the country because of the people who work here.

It has been my honour and privilege to work with you, please know that I will always support this great organization. I wish you all the best in the future.

Evans began her career with the force in 1983 as a constable and quickly rose up the ranks. She assisted in a review of the Paul Bernardo case and in 2010 was sent to B.C. to help with the investigation of Robert Pickton, and the broader probe into missing women across the lower mainland. She was appointed chief in late 2012.

With 2,000 officers, the PRP is the third-largest municipal police force in the country, after Toronto and Calgary.

In recent years, the force, under Evans’ leadership, faced a series of controversies. She refused a 2015 police board request led by Mississauga Mayor Bonnie Crombie and Brampton Mayor Linda Jeffrey to suspend the practice of carding after data showed her force had targeted black individuals in the controversial stops at three times the rate, compared to whites.

Evans and the board continued to butt heads over issues such as the force’s lack of visible minority officers and the board’s request to audit the force to find out if it was properly addressing diversity issues.

In August the police board determined that possible misconduct by Evans might have played a role in the bungled investigation into the deaths of three Mississauga family members who died years apart. It was eventually found by the court that two members of the Harrison family were murdered and the family believes the third was as well. The Office of the Independent Police Review Director is currently investigating the role Evans played in the mishandled cases.

Widespread misconduct in the force under Evans' leadership was revealed when the Toronto Star published a report that showed more than 600 members of the force’s uniform staff, about a third of the department, were disciplined for misconduct over a recent five-year period. It was by far the highest rate of any of the large forces in the province.

She was also dogged by a series of other controversies, some that preceded her time as chief, including: