More than 338,000 crimes against women filed in one year, including over 110,000 instances of violence at the hands of husbands and relatives. More than 40,000 crimes in one year against those from “Scheduled Castes” (formerly called the country’s “untouchable” people) under a state-recognized social hierarchy. More than 106,000 cases of violence against children in the same year. More than 890 recorded deaths in judicial custody the same year. Plans, currently, to recruit 5,000 “religious soldiers” for vigilante justice by a group that spawned the current federal governing party (both organizations uphold Hindu-nationalism as a central tenet).

These are just some of the shocking details from India in the latest annual country-reports by Human Rights Watch and Amnesty International that each year provide an important view of the nation’s increasingly appalling human rights record.

Andrew Scheer, federal opposition leader and head of the Conservative party, is the latest elected official to touch down in India, arriving there over the Canadian long-weekend for what is being promoted as a nine-day trip. But his mission to “repair and strengthen” our relationship after a controversial visit by Prime Minister Justin Trudeau early in the year, likely won’t include any talk about India’s deplorable human rights situation, just like the previous visits by Canadian officials, which have become routine.

The Pointer asked Scheer and his staff for a week, before he left, if such issues would be addressed. He did not answer the question, specifically. His spokesperson, Daniel Schow, provided a written response about what will be the focus of the trip: “Mr. Scheer will meet with senior Indian officials, business leaders, civil society and faith leaders to underscore the powerful values and strong alliance that underpins the relationship between Canadians and Indians.” 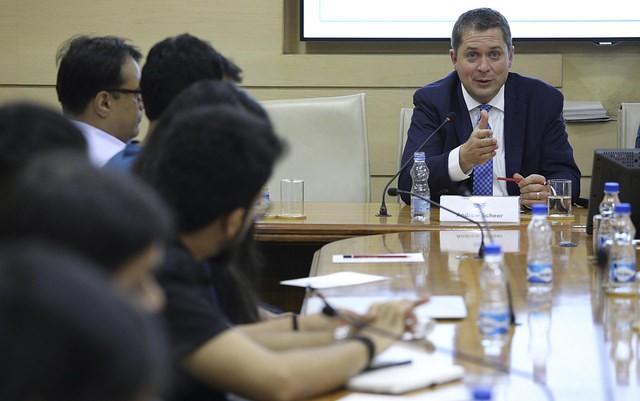 Canadians, including Brampton residents, have not seen their elected officials raise the alarming human rights statistics during their increasingly frequent trade missions and business trips to the world’s largest democracy. The silence by our elected representatives is a sharp contrast to our foreign policy stance (based on fundamental Canadian values that flow from the Charter of Rights and Freedoms) on the subject toward other countries such as Saudi Arabia and Myanmar, which officials, including Trudeau and Foreign Affairs Minister Chrystia Freeland have strongly condemned for recent human rights abuses.

Trudeau did not publicly raise human rights abuses, which experts have stated are willfully ignored or even condoned by the Indian government, on his trip there early this year, during which Indian Prime Minister Narendra Modi called Trudeau out for allegedly being soft on so-called Sikh extremism in Canada. On a trip to China last year Trudeau did raise human rights as an issue of concern, but it was centred on the questionable detention of Canadians by Chinese authorities, at the time.

Human rights in a democracy such as India, where the government generally denies any involvement in abuses, is a much more precarious issue for foreign officials, compared to overtly state-sponsored behaviour, such as that which Canada’s global affairs ministry recently criticized Saudi Arabia for, when authorities there arrested political activists who protested the lack of rights for women.

But observers here point out that the situation in India, regarding attacks on women and other alarming rates of abuse, is possibly far worse than in any other country, and it’s clearly happening in the absence of government action.

The Human Rights Watch 2018 World Report states the Indian BJP government “failed to promptly or credibly investigate” many of the attacks carried out against women, religious minorities and certain groups protesting for reforms “while many senior BJP leaders publicly promoted Hindu supremacy and ultra-nationalism, which encouraged further violence.”

One Canadian group is among a growing number of advocacy organizations operating in countries with large Indian diaspora communities, trying to draw attention to conditions in the country.

“Because India is known as the world's largest democracy, it is being given a free card on its appalling human rights record,” says Balpreet Singh, a spokesperson and legal counsel for the World Sikh Organization of Canada, an advocacy and social justice group that promotes rights for Sikhs and others globally. “As a result, the situation faced by women and minorities in India has gotten worse. Hindu-nationalist mobs are regularly lynching individuals from minority communities for alleged crimes such as eating beef. The use of torture by security forces is also endemic and wide-spread. Canada should not hesitate to raise these human rights issues with India as it has with other countries.”

Singh says he’s concerned that Indian officials will use Scheer’s trip to once again push the unsubstantiated narrative of Sikh extremism in Canada, as they did when Trudeau visited in February.

He says India’s own record should be a focus of officials.

“The evidence of India's abhorrent human rights records has been well documented by the likes of Amnesty International and Human Rights Watch.”

The U.S. State Department also issues an annual country-by-country report on human rights. Its most recent, in 2017, includes a 50-page section on India that is disturbing to read. It includes the following conclusions:

-World Vision India surveyed 45,844 children between 12 and 18 across the country and found one in every two children was a victim of sexual abuse.

-Marital rape is not illegal when the woman is older than 15. Official statistics show rape is the country’s fastest growing crime, though observers believe the number of rapes still remained vastly underreported.

-The estimated conviction rate for crimes against women was 18.9 percent.

-Data showed authorities arrested 19,973 persons for dowry deaths in 2015, a practice of killing recently married women for not providing enough money upon marriage to the husband or his family.

-An estimated 120,000 young women were bonded into labour to earn money for a dowry to be able to marry.

-An estimated 450,000 young women and girls were forced into “temple-related” prostitution. Some had to enter into symbolic marriages to Hindu priests and temple patrons, and were victims of rape or sexual abuse at their hands in a widespread system of sex trafficking.

And when journalists sometimes tried to expose the unimaginable scale of these crimes against humanity, the U.S. State Department reported that government pressure often led to self-censorship.

The report details the dismissal of a senior editor at one of India’s largest newspaper chains after he criticized the ruling BJP party and Prime Minister Narendra Modi, through his creation of a “Hate Tracker” feature that catalogued violence against women, religious minorities, those in LGBTQ communities and other discriminated groups.

The U.S. government report cites an internal Indian media watchdog group’s analysis that states over an 18 month period in 2016 and 2017, “there was an overall sense of shrinking liberty not experienced in recent years.” There were 54 alleged attacks on journalists, three television stations were banned, there were widespread shutdowns of online news sites and 45 cases were formally brought against groups or individuals for allegedly spreading information to incite rebellious activity against the government.

A prominent figure in Canada’s South-Asian media industry, who was invited to cover Trudeau’s last trip to India and also went with Kathleen Wynne and Dalton McGuinty on trade missions there when each served as Ontario premier, believes short-term business interests and efforts to expand economic ties between the two countries might be the stated objectives of the frequent trips, but he doesn’t think that’s the real reason why Canadian politicians continually travel there.

Saini says many of his listeners and viewers call into his shows, questioning why so many Canadian politicians travel to India, in particular. He says most believe it’s to pander for votes. “There has never been any follow-up after the trips to tell us what business deals were signed, what contracts were entered into or what MOUs (formal agreements to do business) were issued,” Saini says.

In 2017 India was Canada’s seventh largest export market, representing .8 percent of our total export trade, compared to the U.S. at 76 percent and China at 4.3 percent.

Despite all the trips by Ontario politicians to India, the country did not make the list of the province’s top export markets, with the U.S. accounting for 82 percent of Ontario’s exports in 2017 and Germany ranking fifth at .8 percent.

Saini says large Indo-Canadian voting blocs in Ontario, B.C. and in smaller numbers across Canada, are the real focus of the frequent India trips. He also says some of the largest donors to the country’s three main political parties are groups and individuals from the Indo-Canadian community. 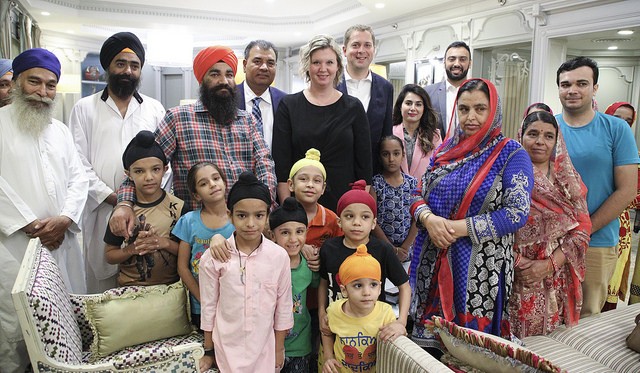 “At one party in Mumbai in February (during Trudeau’s trip) I was shocked. Hundreds of people were there. I recognized almost all of them. They were all from Canada. They had flown over just for the event.”

When asked if he has ever heard any of the politicians, including Brampton’s five MPs who accompanied Trudeau in February, raise the issue of India’s human rights record, Saini says, “No. Never.”

All five of Brampton’s current MPs have visited India officially, since being elected.

The silence comes amid repeated calls for the Canadian government to deal with the matter. Earlier this year, Amnesty International issued open letters to both Prime Minister Trudeau and Prime Minister Modi, ahead of Trudeau’s February visit, calling on the two leaders to address a number of outstanding human rights issues. In the letters, Amnesty International called on them to discuss the ongoing humanitarian crisis facing the Rohingya Muslim population in India, the ongoing criminalization and persecution of LGBTQ peoples in India, and the lack of criminal provisions against rape in the context of marriage, among other items.

“The relationship between Canada and India is an important one and the ties between our countries are numerous, deep and longstanding,” wrote Alex Neve, Secretary General of Amnesty International Canada, at the time. “It is vital that in a spirit of mutual support, such a relationship give serious attention to pursuing all possible avenues for strengthened respect and regard for human rights. As such, Amnesty International is also reaching out to Prime Minister Modi, urging that he and other members of his government raise recommendations for human rights improvement in Canada with you and other Canadian officials during meetings and discussions held during this upcoming visit.”

When contacted by The Pointer, an Amnesty International spokesperson noted the organization continues to stand by the position made in the open letters, despite no public mention of any human rights issues during the February trip.

But when it comes to India, silence remains the theme.

“There is a feeling that Canada has been wilfully blind to India's human rights record,” says Balpreet Singh, who believes the relationship between the two countries needs to mature beyond business interests and internal politics.

“Those responsible for human rights violations in India need to be strongly and unequivocally condemned by Canada.”