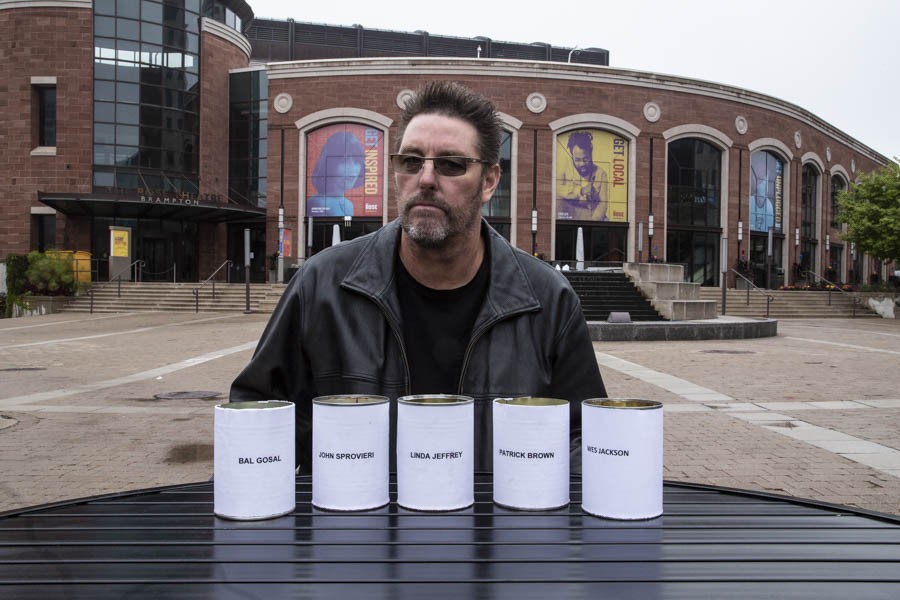 In 1932 the sister-in-law of George Gallup asked him to help out in her run for the state secretary’s job in Iowa.

Gallup was a journalist, advertising executive and noted researcher, but until then his name wasn’t synonymous with the role of political polling as it is today.

He used a statistical method to take the pulse of the local Iowa electorate, and over time expanded his methodology, turning it into a social science that situated his name at the centre of the body politic.

Political polling has gained veracity over time and is now a respected measuring tool that has played an ever-increasing part in not just the theatre of politics, but in the process's impact on our daily lives. Today, there are firms like Gallup, Ipsos, Environics, EKOS Research, Forum Research, and even SurveyMonkey that have collected and ground up and pulverized polling numbers into a fine powder. The granular results inform the public, politicians and their parties about everything from issues-based campaigning to what constituents expect once successful candidates step into office. A constant feed of internal polling now dictates every step taken by some politicians, before and after elections.

Millions of potential voters have had their intentions stripped down and laid bare and fully analyzed by thousands of pollsters before releasing them to the public and the media as time-sensitive documents that show what people are thinking at a particular moment in the hyper-driven political news cycle.

From state secretary to president of the United States to prime minister of Canada to a local city councillor in a city like Brampton, polling is as much a part of our election process as lawn signs, attack ads, door-knocking and debates.

Even The Pointer has played its part. Before publishing our first story a month ago, we commissioned Forum Research to poll 999 eligible Brampton voters and ask them dozens of questions, including who they might choose for mayor. Incumbent Linda Jeffrey (41 percent) and Patrick Brown (33 percent) finished one-two.

It can be argued, a lot of today’s phone and online-based high-level political polling, despite increased accuracy and fine-tuned methodology, lacks a certain connection with the public – that raw, natural, in-your-face ethos that embodies honest political discourse at the base level, where two people, staring each other in the eye, speak their mind.

That’s how Brampton small businessman Jeff Chalmers does it. He’s a self-described political junkie and owner of Chrome on the Range, his funky mobile kitchen that caters to people who want inexpensive but tasty and healthy on-the-run cuisine. His travelling eatery doubles as a vehicle where ideas about the city’s future get roundly interrogated. And, as of late, a place where his own unique style of political polling has taken place as people step up for a bite.

The polished steel mobile has been seen everywhere in Brampton over the years – from its place on Main Street during the Saturday market each weekend between late spring and Thanksgiving, to the side of the skating rink at Gage Park, and many nooks and corners along the way.

He’s best known for his sandwich creations, the “Brampton Benny,” a tasty eggs benedict on the go, and “Harry Dale,” a tribute to the father of the Dale Estates, the massive flower business that once operated at the corner of Vodden and Queen Streets and employed hundreds of Bramptonians. Chalmers creates deep connections with the city’s residents, present and past — Dale played a part in coining “Flowertown”, and the eventual naming of the Rose Theatre.

Chalmers was born and lived in the Guildwood Village area of Scarborough for years, and only moved to Brampton in 2005 with his wife Liz, daughter Karli, 15, and son James, 12. Since arrival, he has been plugged into the community as a member of the Heritage Board. He is now a virtual expert on this city’s long and colourful history. His family lives in a heritage home on Isabella Street near the downtown core, once owned by William Higgins, the former water commissioner. Higgins died right there of a heart attack on New Year’s Eve 1934, and every December 31, the Chalmers family raises a glass to toast old William as they stare at an 8 X 10 portrait that sits above the fireplace. 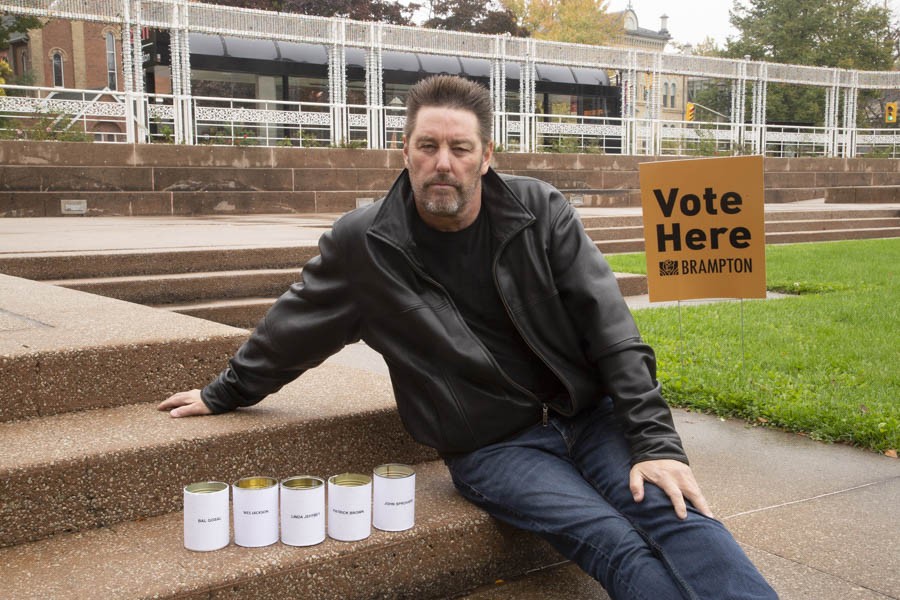 Chalmers isn’t some geek who spins numbers like he’s a member of the Pythagorean Brotherhood. Still, he figures his unscientific survey method is as good as anything that might cost a client thousands, but he’s perfectly aware that his poll is far from scientific and not without some obvious flaws, such as the sample size, and its narrow demographic of regular market-goers. Still, it’s all about connecting politics to food choices and … tip jars.

Every Saturday morning during the municipal election season in 2014 and 2018, Chrome on the Range puts out tip jars with the names of the mayoral candidates on them, then adds up the money to create percentages measuring the public’s interest in the people running.

Chalmers admits sheepishly that the idea is a straight steal from a similar poll run by Lick’s Home Burgers & Ice Cream that still has stores scattered throughout Ontario. Chalmers calls his poll “a fabulous barometer” into the mindset of the local voting public who might (emphasis on “might”) cast a ballot in the upcoming election. A sizable portion (about 65 percent) still don’t, which irks him to no end.

He loves to listen and engage with his customers, even if sometimes he is disturbed by what he hears. Last winter, for example, while Chrome on the Range sat kitty-corner to the Gage Park skating rink, he did an informal poll and asked 50 visitors if they knew their local councillor. Only eight did, and the others, he said, seemed totally unplugged from the political process. He wonders why people don’t seem to care where their property tax dollars are going, and who’s making the decision.

There’s a big need for rebuilding the recreation centres, keeping the streets clean of snow, properly funding our police force to keep residents safe and dozens of other issues that impact people’s lives minute-by-minute. The fact is, Chalmers is a political junkie, and most Bramptonians are not.

He reads everything there is on Brampton.ca., and watches council meetings online, or the local cable station. He attended the recent mayor’s debate at the Rose Theatre, and talks incessantly to politicians and the public. He thinks the downtown market, which ended Thanksgiving weekend, is perhaps the best place to take the pulse of the city.

People come to it from all corners of Brampton, especially this past weekend when the best meats and farm-fresh vegetables were available for customers to spread out on the holiday dinner table. He said the market might be the most democratic forum in the city – better than the council chambers at city hall. Chalmers is erudite, and free-spirited, with a passion for politics and a wicked sense of humour. In many ways, he is the multitudinous man: he is not only a well-known radio DJ who spins tunes from the 1970s-80s-90s every Sunday from 6 to midnight on boom 97.3 FM, but takes his Chrome on the Range to special events throughout the city.

He proudly announces that he once sold 150 chicken dogs at a gathering at his daughter’s school. He loves the fact his tip jar poll is playing a small part in the 2018 municipal vote.

So how have his numbers tumbled out over the past two mayoral elections? In 2014, he got it wrong. John Sanderson finished tops with 48 percent of the vote. Linda Jeffrey (the eventual winner with 49 per cent) finished second at 37, and the incumbent, Susan Fennell scored zero.

To lighten the mood, Chalmers also put out a jar with the name Alfred E. Neuman on it, the gap-toothed and fictitious cover boy and mascot of the satirical Mad Magazine. Neuman finished third with 15 percent.

In this final poll at Saturday’s market, Brown scored 77 percent, Jeffrey 15, and undecided 8.

Chalmers had most of the candidates on jars at one time, but quickly realized it was a two-person race, and finished with just the three.

While he voted for Jeffrey in the last election and is a fan, he is also impressed by the energy of the other front-runner, Brown, who he predicts will win.

Sure, pollsters get it wrong. There are literally hundreds of examples of foul-ups – and that makes the theorem claiming it as science, a little suspect. The two most notable examples come from the U.S., once in 1948, and then 2016. Gallup predicted Thomas Dewey would defeat the Democratic incumbent Harry Truman in the race for president. The famous Chicago Tribune front page published just hours before the final votes were even in, proclaimed that “DEWEY DEFEATS TRUMAN.”

The shot of Truman holding up the newspaper and laughing about it afterward, is a testament to the shortcomings of polling, and often used as a cautionary tale. Gallup explained this big miss by saying his firm had simply stopped polling three weeks before the election. That argument didn’t cut the muster in 2016 when Donald Trump, despite most polling projections, won.

Other examples of polls that missed badly, especially in Canada, are easily Googled. Fennell’s upset over Peter Robertson in the 2000 vote is a recent Brampton example.

Chalmers said his poll is all about stimulating conversation and getting voters interested in the local races. He wants them to know the issues, visit the candidates’ websites, listen to the debates, and vote. He said he is frustrated that only about 35 percent of them actually put their X on the ballot.

Chalmers grew up in an apolitical house in the Guildwood Village of Scarborough in the 1970s, and spent most of his early working years in the 1990s as a producer and on-air talent as a member of the “Q Zoo,” the oddball team of creative artists who turned morning radio on Q-107 into a theatre of the mind.

After moving to Brampton he grew alarmed during the last few years of the Fennell era when the city seemed driven by a self-serving executive team more interested in pushing their own interests than in doing what was needed for taxpayers.

He says issues like Light Rail Transit, rising crime rates, grinding gridlock, and the controversial downtown South-West Quadrant project (the $205 million city hall expansion), should have inflamed people to engage. It was one of the reasons why he used Chrome on the Range to do his own form of polling.

Most polls have a standard deviation of two to five percentage points, 19 out of 20 times. That gives them cover if the unexpected happens. Every time it does, it becomes more clear that no one really knows what will happen until the voters step into the polling booth.

Sometimes, voters lie to pollsters. Sometimes an election can pivot on a last-second issue or scandal, causing a massive turnaround. Or if the weather turns lousy on election day, that might soften the vote. Anything that inflames voters or keeps them at home, makes election night oh so thrilling. It also adds some credibility to Chalmers’ cheeky argument that his poll is about as scientific as the others that cost lots of money. With a wink and a smile, he told The Pointer that most polls are usually right – until they’re proven very wrong.