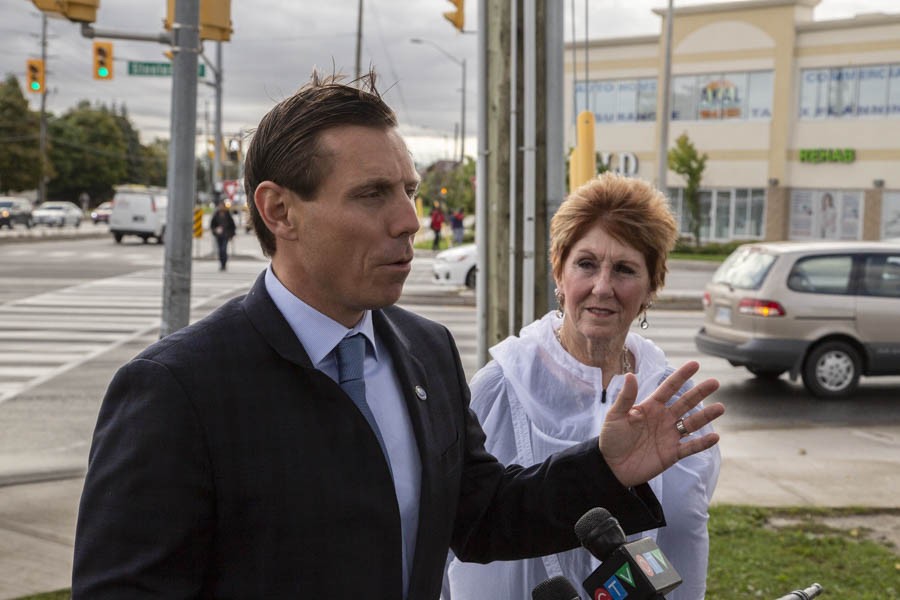 On a windswept Thursday morning at one of the busiest street corners in the city, mayoral candidate Patrick Brown staged an announcement to address increasing traffic congestion in the city.

After decades of failure to find a solution to the freight bypass issue that has made all-day, two-way GO Train service in and out of Brampton an unfulfilled dream for thousands of daily commuters, Brown promised that, if elected, he will finally fix the problem and get the funding for increased rail service.

“I am tired of the city being forgotten. If you look at Scarborough with the $3 billion assistance from other levels of government for their transportation plans, and yet the LRT (in Brampton) is going to be 1/10th of that,” said Brown in front of a small crowd of mostly media and staff.

Brown did not detail what he will do, specifically, to fulfill his commitments.

The LRT funding he referred to was the roughly $300 million that the former Kathleen Wynne government pulled off the table when city council refused to support the province’s preferred route for the city.

His plan, Brown said, will reduce traffic bottlenecks and increase public transportation across Brampton. Currently, the city has limited GO Train service, with trains running between downtown Brampton and Toronto from about 6 a.m. to 7:40 p.m. Monday to Friday (higher frequency during peak periods) and only bus service on weekends.

For an exclusive poll commissioned by The Pointer in late August and conducted by Forum Research, 999 eligible Brampton voters were asked what issues the next city council should focus on. Traffic congestion was the top choice, with 23 percent of respondents saying they want council to focus on reducing gridlock on city streets; followed by better healthcare at 20 percent, and community-based policing at 18 percent. Better public transit was only chosen by 6 percent of respondents, though effective transit options are one of the best ways to curb vehicular traffic.

Flanked by Wards 1 and 5 Regional Councillor Elaine Moore and former Wards 3 and 4 Councillor John Sanderson (who is seeking to win back his seat after running for mayor in 2014), Brown repeated familiar talking points he has used when discussing transportation in the city. 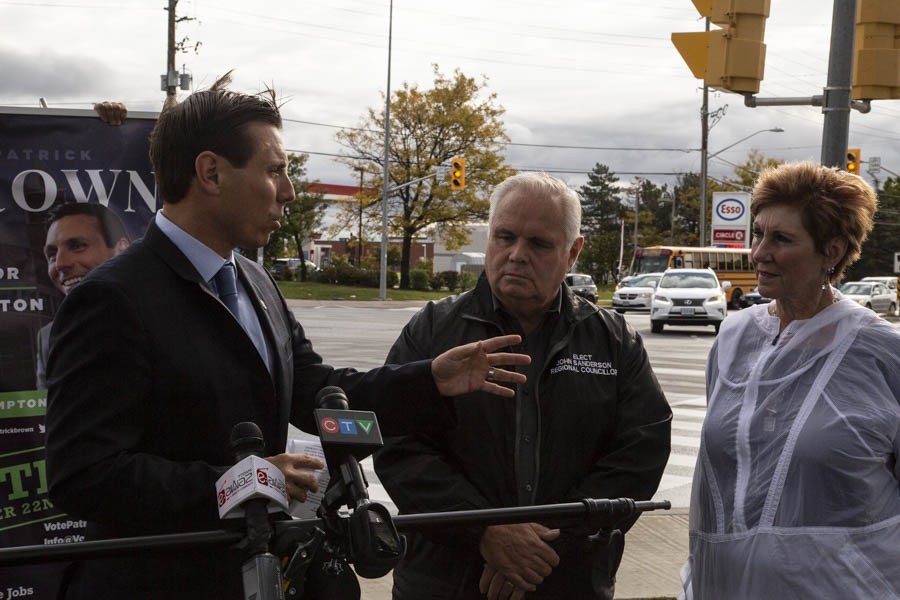 As part of his roadmap for Brampton’s transportation infrastructure, Brown promised three initiatives:

-Demand that the federal and provincial governments transfer what he calls “fair share transit funding” to Brampton. He was keen to point out, as he has on other occasions, that municipalities such as Vaughan and Mississauga secured funding for higher order transit, while the money for Brampton’s portion of a proposed LRT was taken away by the former Liberal government.

-Push for two-way all-day GO Transit service, which Brown says in his press release the city has been lobbying for since the ‘80s, but still does not have the frequent service Brampton commuters have been wanting for more than 30 years.

-Advance element four of the Brampton 2040 vision which is titled, Transportation and Connectivity. The section of the vision, designed as part of the whole plan with input from more than 13,000 Brampton residents, includes more walkable, cyclable, and transit friendly streets.

Brown’s plan for how he will advance element four of the vision was light on specifics, but he said he will: create what he calls an Active Mobility Charter Stewardship Committee on council; push for a complete streets concept, an idea where streets are organized to accommodate all modes of transportation including rapid transit, cycling, cars and pedestrian spaces; have city hall support a transit related citizens’ advocacy group called Friends of Transit; and implement the ambitious double-loop transit system for an LRT, a provision of the 2040 plan brought forth by Vancouver-based urban planner Larry Beasley, who the city hired to create a bold future plan for Brampton’s growth.

Moore chairs the city’s planning committee, and she provided input for the framework of the 2040 Vision. “I can't reinforce the importance of having planning policies that support designing our communities so that they are walkable, so that they are sustainable,” said Moore, when asked about specifics regarding what this plan would look like in the implementation phase.

Moore and Regional Councillor Gael Miles, who are both openly supporting Brown, were heavily criticized during the council term after they questioned what others had done to address transit needs such as securing more funding for higher order transit, or getting a stop on the High Speed Rail line between Toronto and Windsor (Brampton was left off the proposed route, which was announced by the former Wynne government last year, but is not set in stone). When asked what they had done, specifically, on the transit file during their more than 40-combined years on council, including efforts to secure funding from higher levels of government, Moore and Miles provided no examples.

“The GO trains are packed, it is difficult to find a seat. The service isn’t as regular as it could be, we need two-way all-way go desperately.”

Brown’s support for the 2040 Vision is in sharp contrast to that of incumbent Mayor Linda Jeffrey. She said during one of the recent mayoral debates that she does not support the vision’s planned LRT route because she is still strongly behind the former Liberal government’s preferred Main Street route, which the prior council and the current one both voted down. She has committed to putting the Main Street route back on the table, if re-elected.

“I support the Main Street route because that is where the traffic is.... We don’t have a commitment from Queen’s Park North of Steeles. It is foolish to put $4.4 million towards (researching) the McLaughlin and Kennedy Road routes,” she said during a debate hosted by Brampton Focus.

Her claim does not square with the city’s own transit ridership figures, which show the heavy traffic along the route she referred to is not actually on the Main Street portion, it is south of Main Street, between Steeles Avenue and the Mississauga city-centre area, where the Brampton Transit busses run along Hurontario Street.

“Unfortunately, the current mayor has abandoned that element of the Brampton 2040 Vision, and that is short-sighted because we cannot ignore these transit issues,” said Brown during his announcement.

Jeffrey was also heavily criticized after she outlined a vision for the city during the current term, to transform Brampton into an innovation hub. When the High Speed Rail line for the province’s burgeoning innovation corridor was announced by the former Liberal government, after Jeffrey had been a provincial Liberal cabinet minister, she was questioned for failing to get Brampton a stop along the planned route, which will run right along the city.