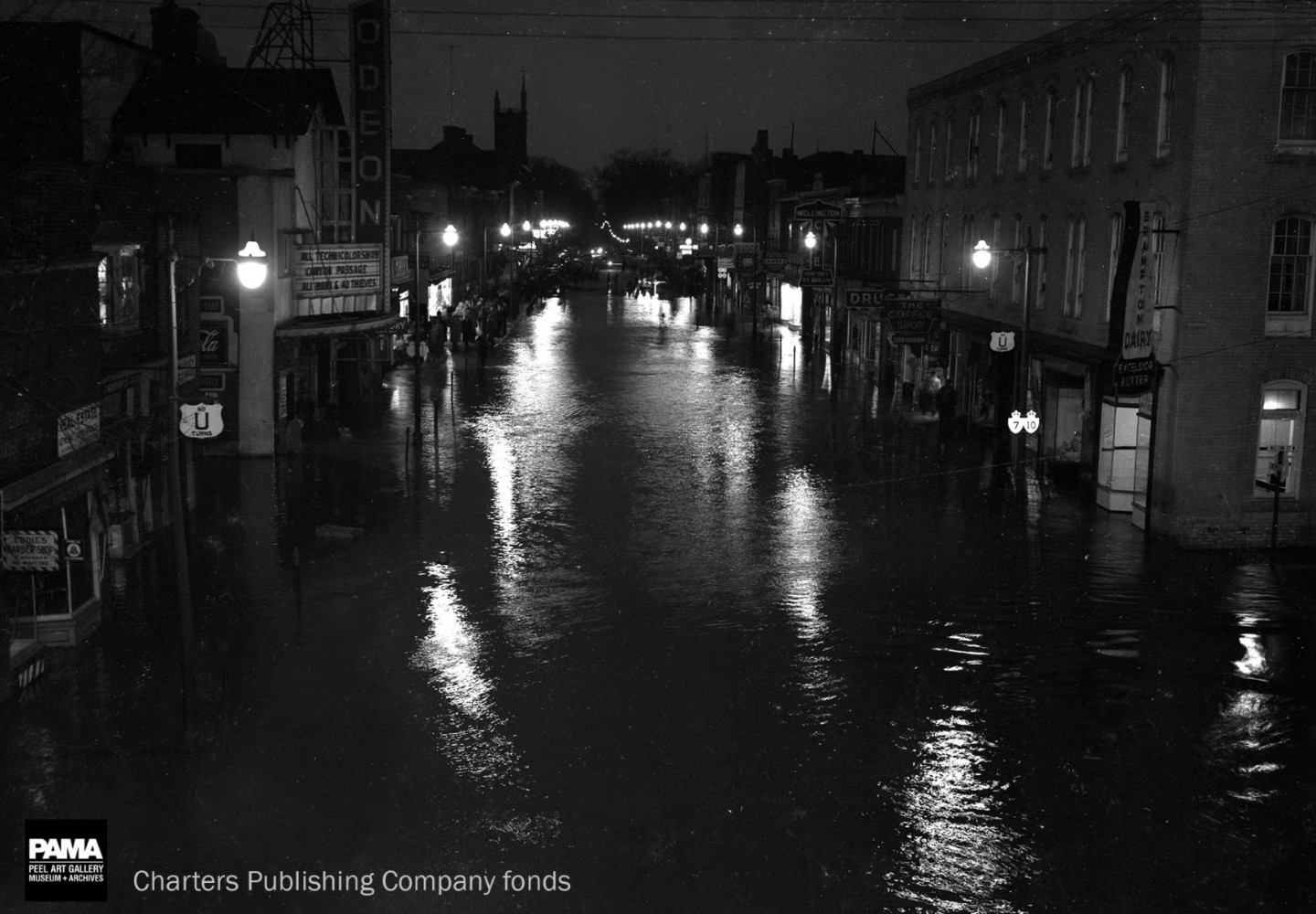 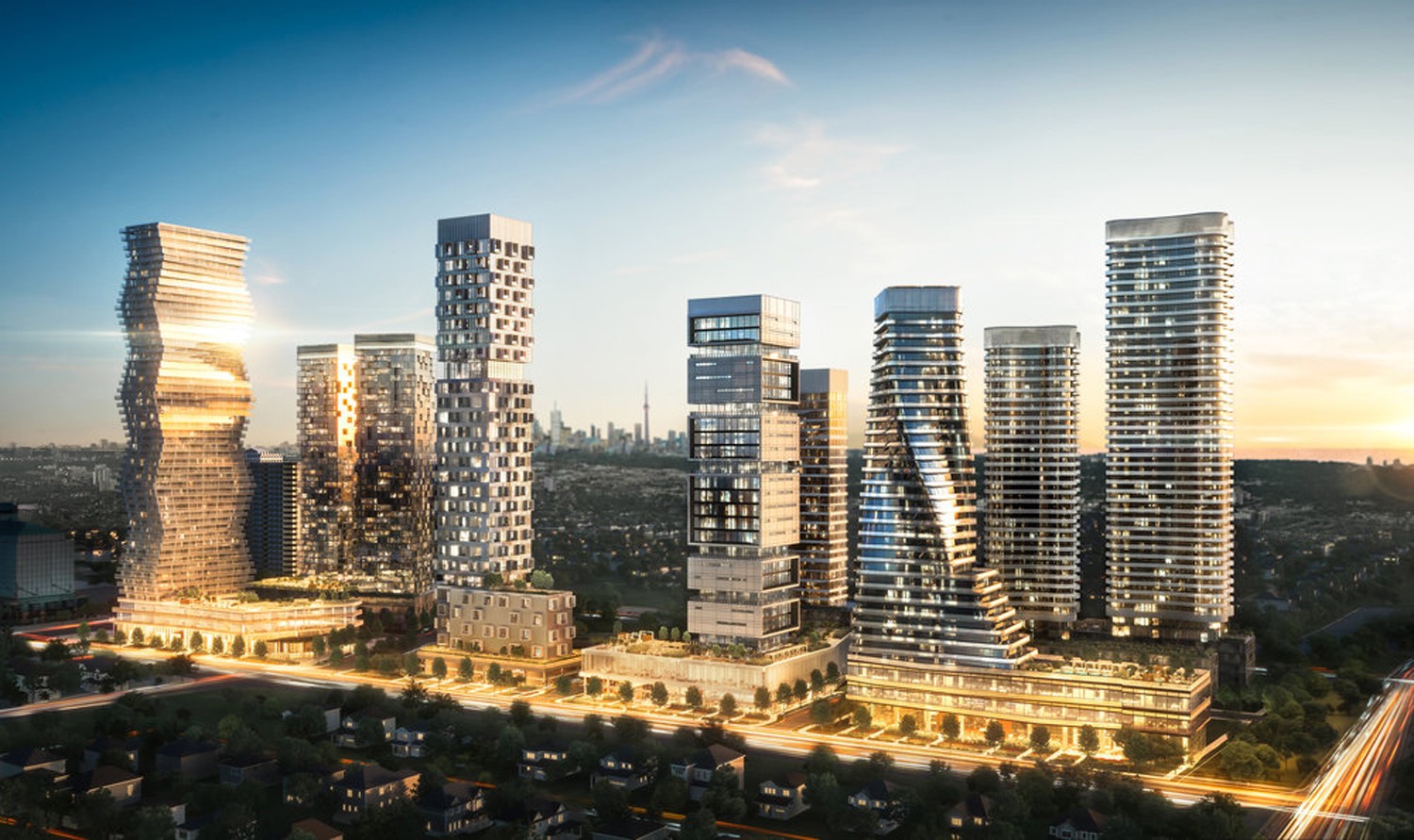 Steve Collie runs weekend tours for Bramptonians looking to immerse themselves in the history of their backyard, including one where he dives deep into the story of the 1948 flood that ravaged Brampton.

“Older people around here tell me that there used to be flood sales in all the stores. It was common that merchandise would get a bit damaged, and then they would have to sell it,” says Collie, a member of the Brampton Heritage Board and a well-known fixture in the city’s downtown community. Dealing with the aftermath of too much water was a reality of life in an era when the city was incredibly flood-prone. 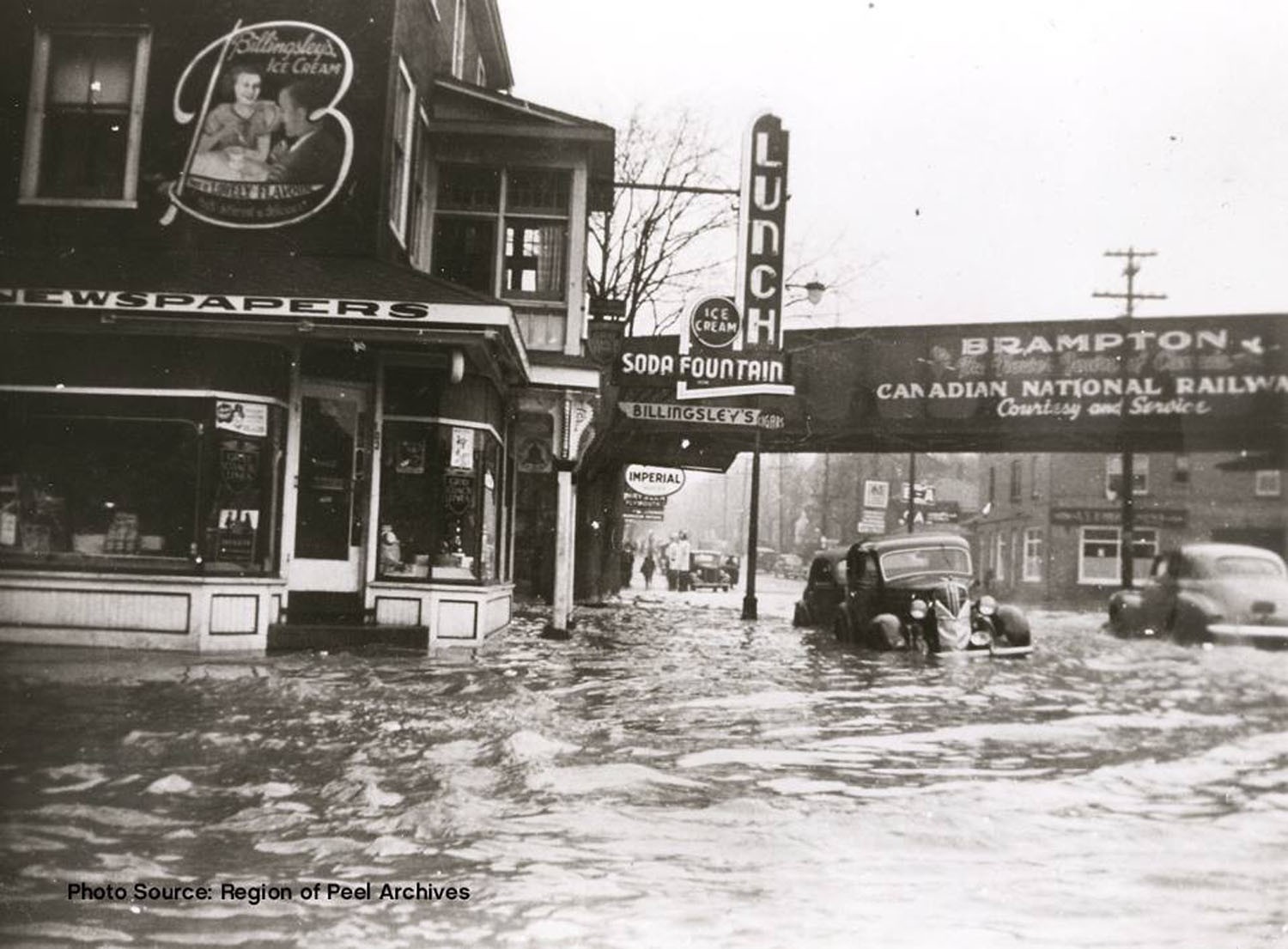 Though the 1948 flood is almost forgotten today, its legacy hangs heavy over the city. The proximity of downtown residences and businesses to Etobicoke Creek led to tight regulations to control development in the area. Those regulations have been a direct obstacle to the city’s maturation.

City’s around the world are centred by the activity of their downtown. It’s where big-business sets up, where jobs, especially high-return white-collar ones are situated. A glittering skyline, much like the one now towering over Mississauga’s city centre, becomes a beacon to the rest of the world. It says, ‘We’re open for business, come work and live in a dynamic place’. Arts and culture thrive in magnificent spaces centred in cities that draw people to take part in the cultural life that surrounds these places. Hotels, restaurants, boutiques and other commercial enterprise all emerge out of the activity that progressive urban planners design.

In Brampton, it’s been a different story.

Real-estate lawyer and mayoral candidate Wesley Jackson is one of a chorus of people calling for measures to remove downtown’s floodplain designation, which has been a major roadblock to redevelopment. “When the private market comes to the City of Brampton and says, ‘This is what I want to build,’ I know for a fact that we've told many applicants, “I'm sorry, but there is a floodplain. In fact, you can't build there,” Jackson said. 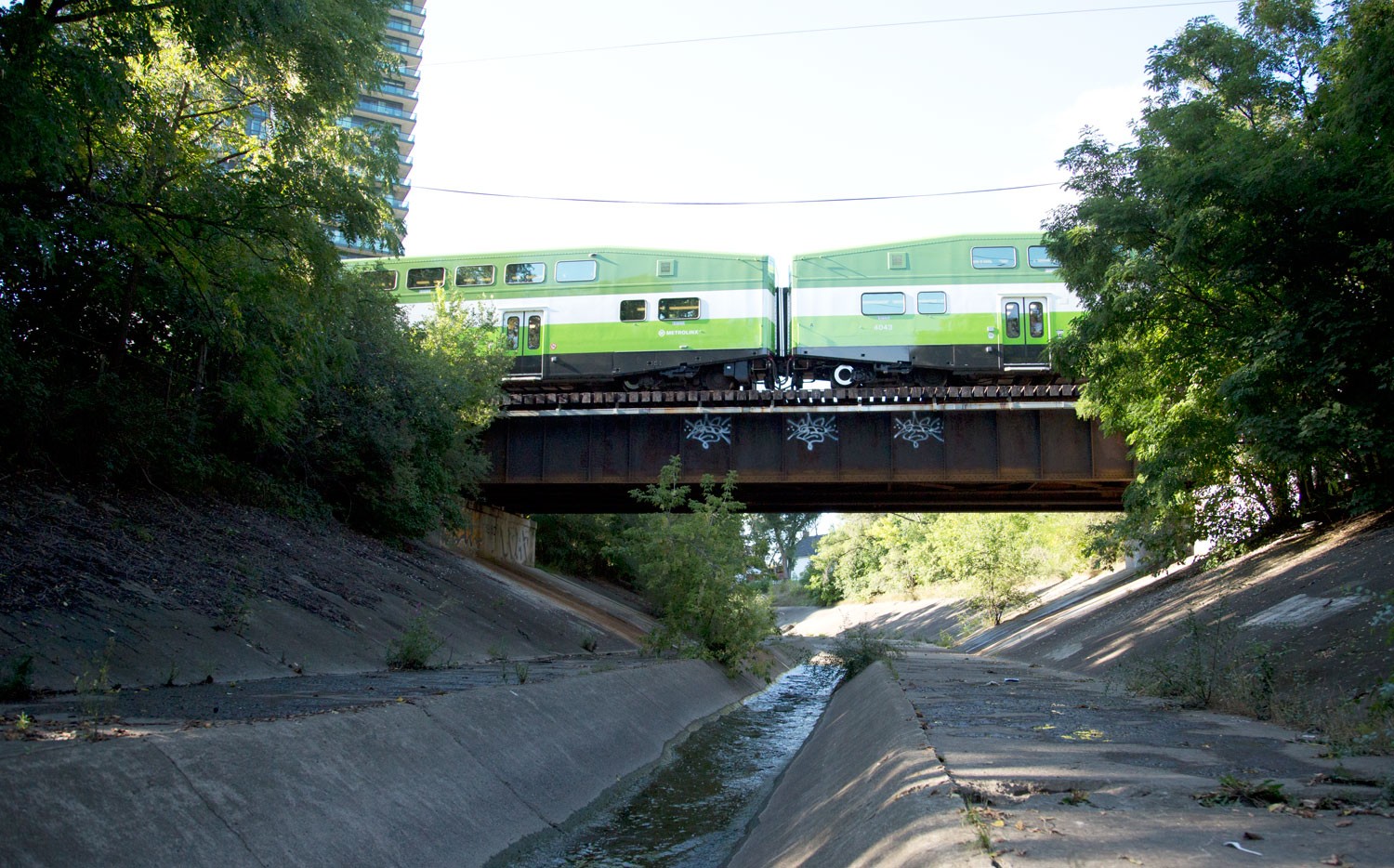 A provincial policy statement from 1996—a subsection of the Planning Act—states that “Development and site alteration shall not be permitted within: areas that would be rendered inaccessible to people and vehicles during times of flooding hazards, erosion hazards and/or dynamic beach hazards, unless it has been demonstrated that the site has safe access appropriate for the nature of the development and the natural hazard; and, a floodway regardless of whether the area of inundation contains high points of land not subject to flooding.”

There is an exception in the statement that says development can occur “in those exceptional situations where a Special Policy Area has been approved.” Special Policy Areas are geographical corridors within a floodplain map where development is allowed. They were created in 1986 by the province’s Ministry of Natural Resources and the Ministry of Municipal Affairs and Housing, to allow for at least some development, provided buildings are floodproofed to the level of a one-in-350-years storm.

Brampton’s first recorded flood occurred in 1854, with many other following that one. But the March 1948 disaster was what spurred the city into action. Etobicoke Creek today flows in a straight line, in a southeasterly direction, but its original path took a brief detour into downtown, through a series of tunnels built over its natural course. It then flowed back out in the open at a spot roughly south of Nelson and Main Streets, to near where the current City Hall war memorial stands. From that point, it continued through tunnels, meandering back southeast and continuing to flow through the same channel it does today.

A body of water flowing naturally through the middle of town would be stunning to look at, but in 1940s Brampton the creek was viewed as a hazard, especially in spring, before the ice had completely broken up.

“Ice floes create an obstruction. The water's got no place to go and will start filling up on top,” overflowing the banks of the channel, says Collie. In Brampton, they described the result as being flooded below and above. “So the tunnels were full, and the streets got six feet of water.” 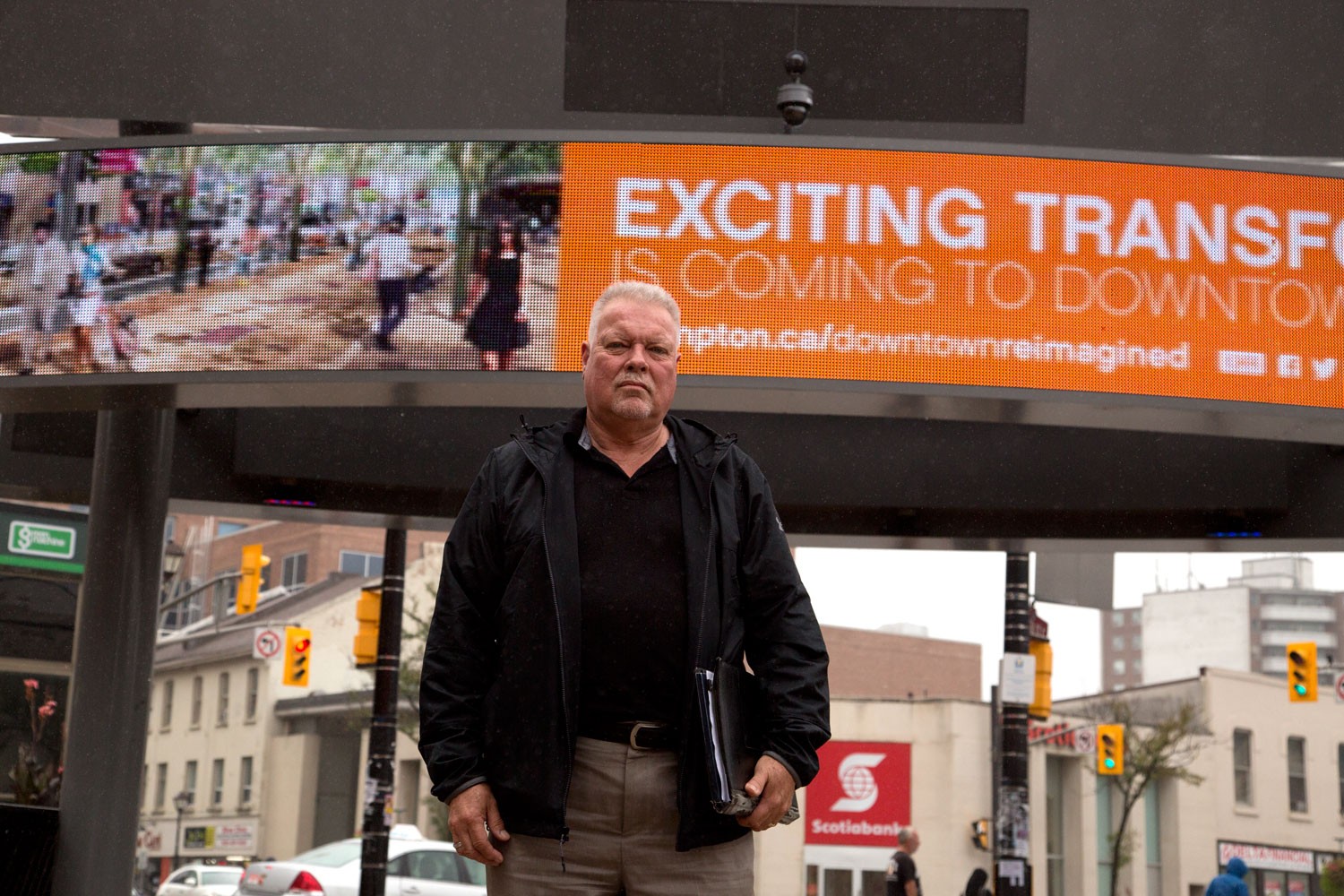 The 1948 flood caused nearly half a million dollars’ worth of damage (over $5 million in today’s dollars), forcing the city to take drastic action. The portion of the creek that meandered through the town was buried, and a concrete channel was built to force the river to flow past it in a straight line.

The new channel was unveiled to the public in 1952, and those who advocated for the $1-million project were vindicated when Brampton was spared the wrath of Hurricane Hazel two years later. 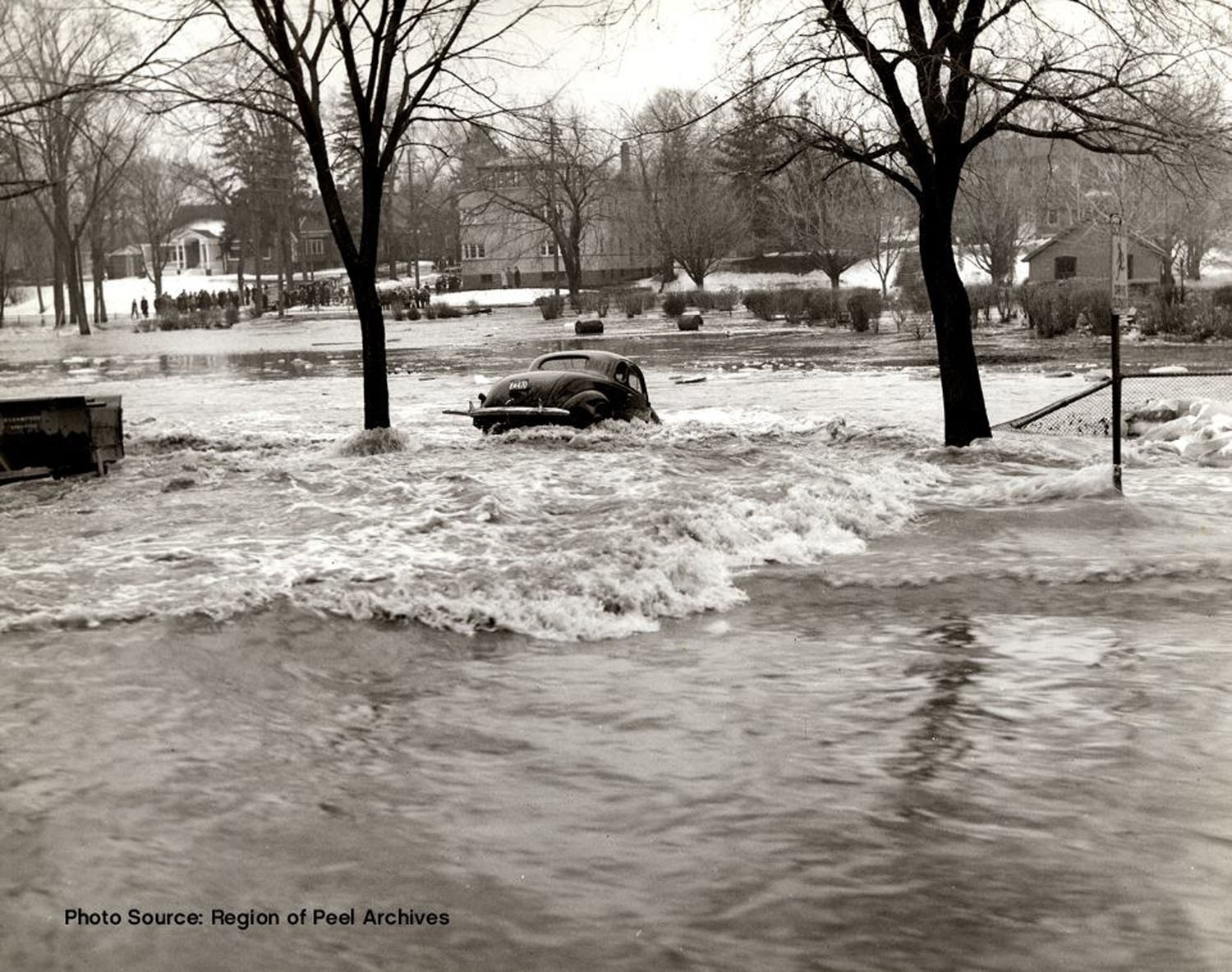 The channel is owned by the Toronto and Region Conservation Authority, which also assumes the duty of floodplain management in Brampton’s downtown.

The TRCA issues permits to developers looking to build in Special Policy Areas and comply with the stipulations of Ontario Regulation 166/06.

The regulation may be necessary, but it provides builders with one more bureaucratic hoop to jump through, making it difficult for residential intensification to occur.

A recurring theme in discussions of Brampton’s woes is the city’s explosive population growth. Between the 2011 and 2016 censuses, the municipality’s population grew by 13.3 percent, well above the province’s 4.6 percent overall.

Housing stock has not kept up with population growth. Seventy-six percent of all housing units in the city consist of single-family homes, meaning that many newcomers opt to live in secondary suites, contributing to sprawl, traffic and a weak tax base. Demand for high-density housing is there, however builders are unable to meet demand in the downtown core.

Vertical office and commercial space, a prerequisite to balance a municipality’s tax base and for attracting major city-building employers (while also helping curb urban sprawl), is another missing component in Brampton’s downtown, unlike in nearby cities such as Markham, Vaughan and Mississauga, where builders are all too happy to help satisfy the demand for commercial, office, and residential high-rise buildings in the booming 905.

Decades went by as development stagnated in downtown Brampton, while other municipalities jumped ahead with multi-storey buildings glistening in the sun.

“So they fought for a hundred years to get the channel; now, we are trying to get funding to redo the channel so that we can develop that area a lot nicer, to modernize it,” Collie says, decrying the slow pace of development in the community. “We’re stuck in the early ’60s right now.”

Free from floodplain restrictions, Mississauga’s Square One neighbourhood, once a mall surrounded by acres of vacant agricultural land, now has a constantly rising skyline that can already be spotted from Toronto. Brampton’s neighbour to the south has seen a similar population growth of 10 percent, but housing stock is catching up to meet demand. Condo developments such as Absolute World, more colloquially known as the Marilyn Monroe towers, are an iconic feature of the city.

The massive, eight-tower M City development on 15 acres of land soon to be constructed in the heart of downtown Mississauga by Rogers Real Estate Development Ltd. (a company controlled by the family that runs the Canadian telecom giant of the same name, which has owned the property in central Mississauga for decades) is just one of a number of high-rise projects being planned in the city’s downtown area. It will feature an 81-storey condo tower that will easily eclipse the height of every other building in the city, and become one of the tallest structures in the GTA. 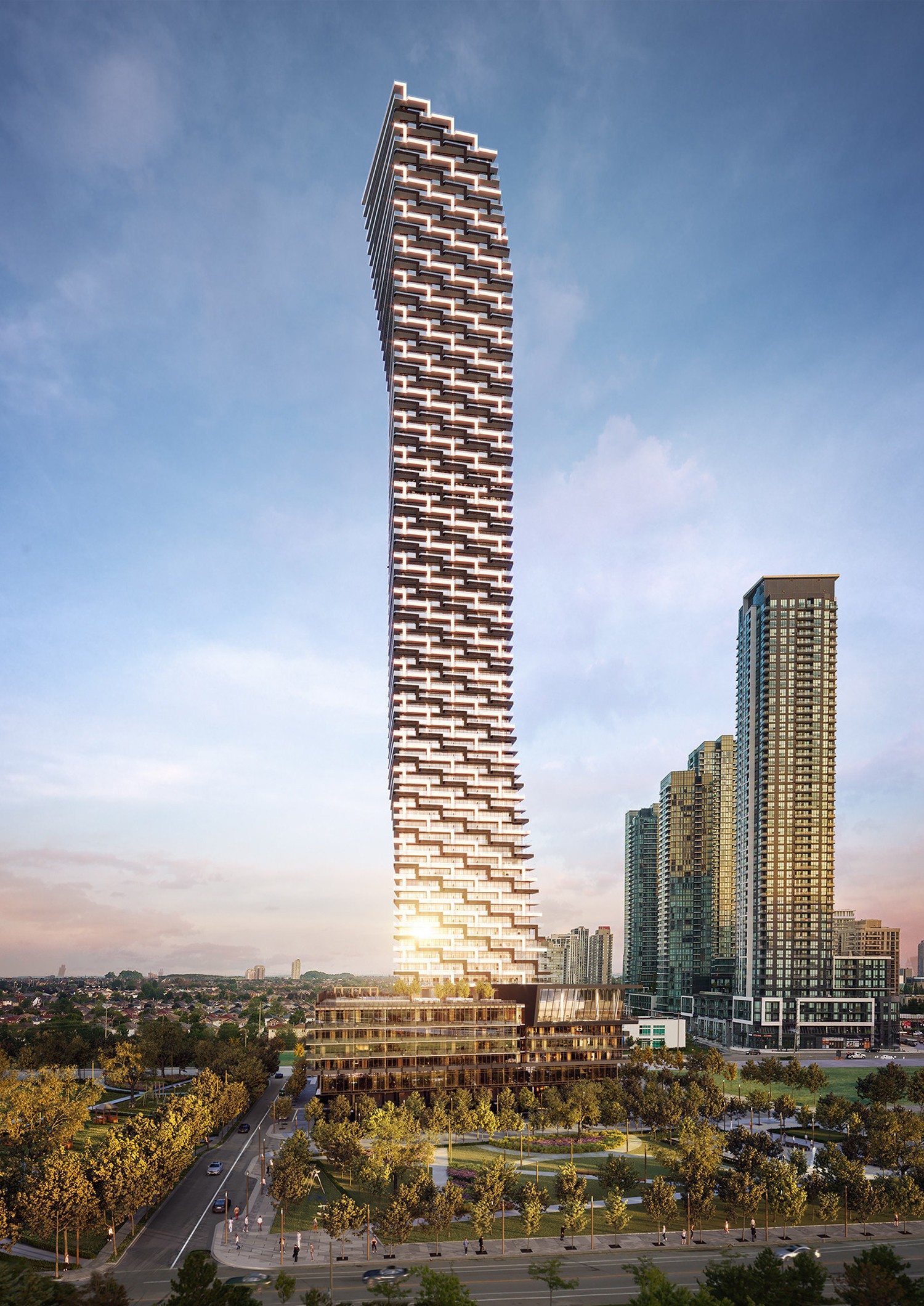 In the next decade and a half the City of Mississauga has stated that $40 to $45 billion of new construction investment will occur in the municipality, much of it in the city-centre area, just to the south of Brampton.

Critics here decry lost opportunities worth billions of dollars, while surrounding cities capitalize on them as Brampton continues to struggle with its unresolved floodplain issues.

For residential intensification to occur as envisioned by the province’s long-term anti-sprawl plan, the floodplain designation needs to be removed so developers can have a freer hand at turning downtown into a more vibrant live-work community.

It was not until 2011 that the city attempted to clear the hurdles necessary to remove the floodplain designation. The City of Brampton’s Comprehensive Flood Risk and Management Analysis of the Special Policy Area provided an overview of what needed to be done to lift the designation. Some recommendations include recognizing that the bypass is a means to reduce the impact of a potential one-in-350-years storm on downtown, and pursuing technical solutions for eliminating flood risk entirely downtown.

The nascent Riverwalk project is the city’s effort to eliminate the floodplain distinction, while simultaneously turning the channel into an attractive location for recreation. 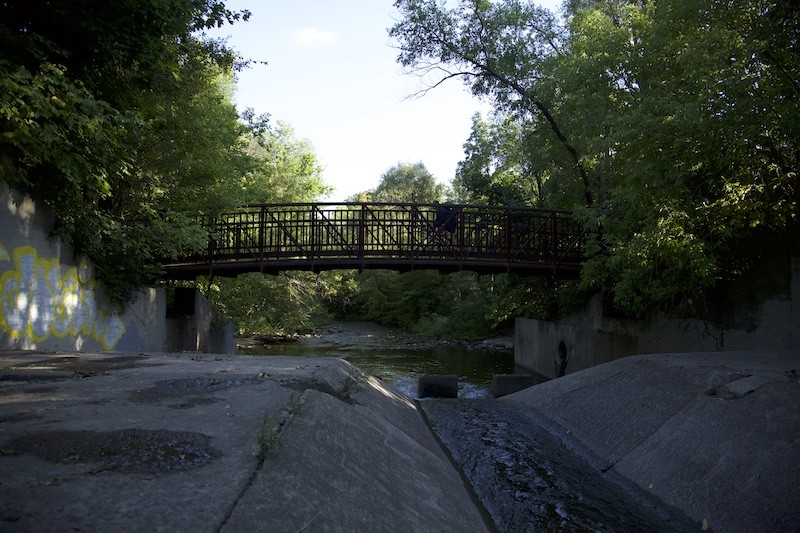 “I believe that the idea of Riverwalk has been kicking around for 20 years or so. Many, many councils have fought about it,” said Laurian Farrell, an engineer at the City of Brampton and a senior manager of environment.

The bypass channel served as a relief valve for flooding for decades, but it’s out of date. For many years, the conservation authority and the city clashed over direly needed upgrades that would have cost roughly $300 million, money the cash-strapped city cannot afford.

According to the 2012 Downtown Brampton Flood Protection Feasibility Study, the channel can withstand a one-in-350-years storm, but only barely. It is, however, woefully unequipped to handle a huge regional storm (like another Hurricane Hazel), that could dump enough rain in a short period to produce one to three metres of flooding.

The Pointer attempted to reach out to the TRCA, over a two-week period, for comment about the delay in upgrades as well as involvement in the Riverwalk project, but the authority did not respond.

Asked why it took so long for a project with the obvious benefits of Riverwalk to get underway, Farrell said it was a matter of getting all the parties on the same page. “To do such large-scale infrastructure projects, often a lot of stars have to align, and it's just a really good time right now to pursue this objective more aggressively.”

The City of Winnipeg offers a prime example of how to quickly and proactively pursue protection from inundation. The Red River Floodway arcs around the eastern side of the city, providing a safety valve when rising waters choke the Red and Assiniboine rivers, which meander right through its heart. It has saved Winnipeg from numerous spring-thaw floods since its completion in 1968.

Winnipeggers at the time of its construction were none too impressed with the project. According to an essay on the floodway titled Duff’s Ditch: the origins, constructions and impact of the Red River Floodway, opponents saw it “as a monumental, and potentially ruinous, waste of money.” Residents began to derisively refer to the floodway as Duff’s Ditch, after then-premier Dufferin Roblin, who championed its construction.

All criticisms of the floodway were put to bed in 1979, when water in the amount of 42,000 cubic feet per second was diverted through the floodway, preventing major devastation in the city. It was again put to the test during the “flood of the century” in 1997. At Grand Forks, N.D., a city about 230 km upstream from Winnipeg on the Red River, the river crested at 54 feet. Winnipeg was spared, thanks to the floodway.