With the front-runner at home, sick, Patrick Brown repeatedly drew loud applause from the crowd gathered Thursday evening for The Pointer’s all-candidates Brampton mayoral debate. Two hours before the event was set to begin, incumbent mayor Linda Jeffrey’s team informed organizers she would not be attending the debate due to illness.

Held in partnership with Sheridan College, on its Brampton campus, the debate delved deep into a variety of topics of burning interest to Bramptonians. 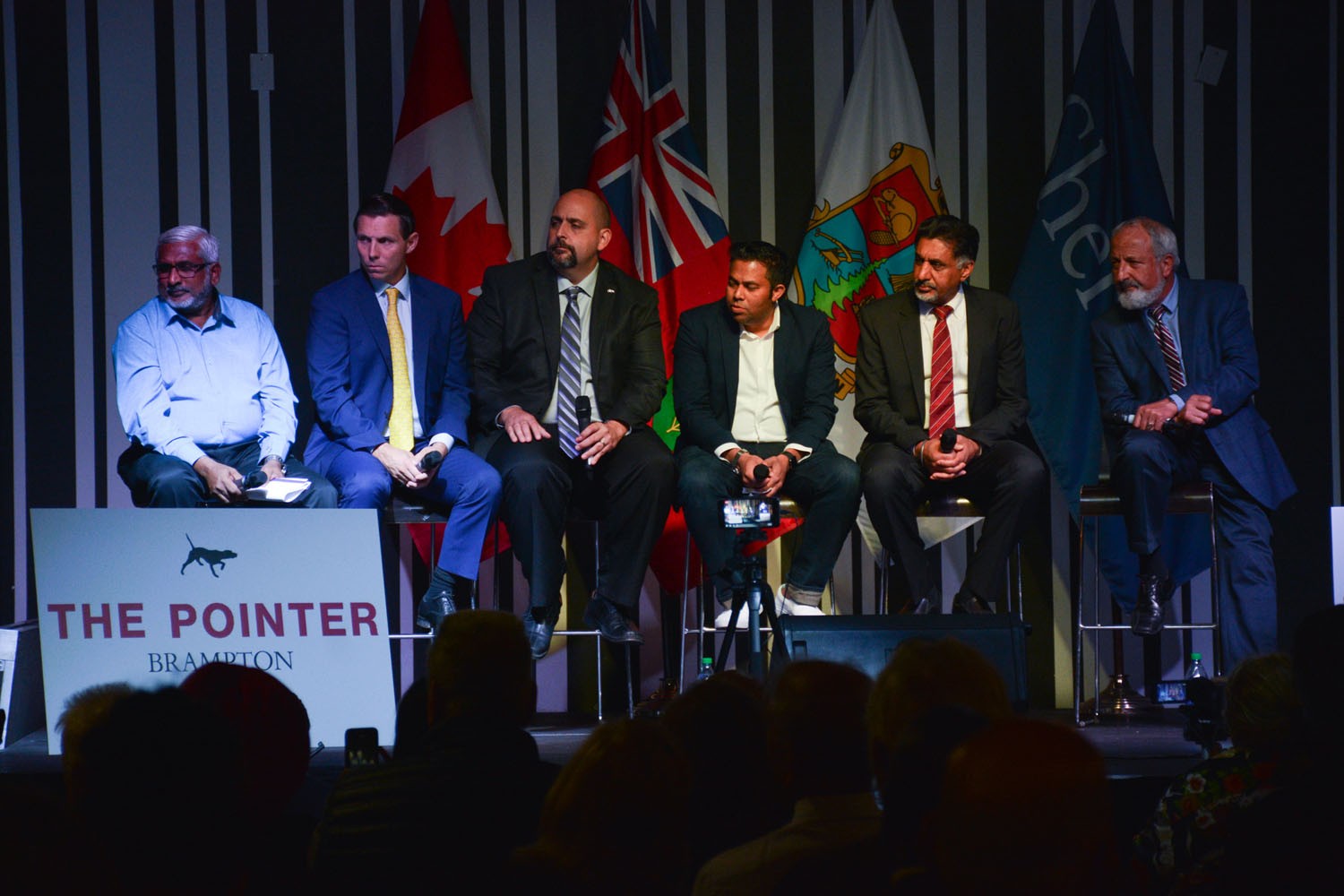 Jeffrey’s absence gave Brown an opportunity to avoid mud-slinging and to spotlight some of his ideas for tackling Brampton’s most pressing issues.

With rising violent crime top of mind for many residents, Brown was asked about police carding practices, which police chief Jennifer Evans has recently said was an important tool that was taken away, possibly leading to an increase in violent crime. Brown said police need the proper techniques and resources to be able to tackle growing crime, but that these techniques cannot be “racially based.” He said he does not support the use of carding in its previous incarnation, which allowed the force to target people on the basis of race. His pledge not to support previous carding practices that allowed “racial profiling” was met with loud support from the diverse audience.

He outlined some modernized approaches to community policing, and said that, if elected, once on the police board (which the mayor serves on) he would seek innovative approaches to policing and would foster community engagement.

On a variety of questions, whether about a second hospital for Brampton, attracting business to the city to take the pressure off the residential tax base, or interaction with the provincial government, Brown repeatedly invoked the name of the widely popular former mayor of Mississauga Hazel McCallion (usually to loud cheers and applause from the crowd) and noted that the city needs to take a strong approach and fight the province to get the resources and support Brampton needs.

“It’s not about pleasing people. It’s about standing up for Brampton,” Brown said, taking the opportunity to point out Jeffrey’s former ties to the Liberal government, and accusing the mayor of always trying to appease her former colleagues, including former premier Kathleen Wynne and others in the former Liberal government that Jeffrey was a part of until resigning as a cabinet minister in 2014 to run for mayor.

“Being best friends did not work for Brampton,” Brown said, referring to Jeffrey’s close ties to the former government, which was swept from office in a crippling defeat this past June.

Jeffrey was the choice of 41 percent of decided and “leaning” voters, according to a late-August poll of 999 voting age Bramptonians commissioned by The Pointer, while her main rival, Brown, the former Ontario Progressive Conservative leader, drew 33 percent. Following them was John Sprovieri, the incumbent councillor for Wards 9 and 10, at 10 percent.

The evening’s questions focused on issues that will require key involvement from the mayor’s office. Two questions on trust, one for Brown and one for Jeffrey, had been published by The Pointer the morning of the debate-day.

For Brown, the question involved controversial candidate nominations in the lead-up to the provincial election last spring, while Brown was still head of the PC party—including the process in a Hamilton-area riding that remains under criminal investigation by Hamilton police. An email from Brown showed he was looking to staff to “get the result I want.”

Addressing the issue, Brown said he never encouraged anyone to do anything untoward. “It’s no shenanigans, no cheating, and no one breaking the rules,” he said, adding that he personally had brought in third-party oversight to look into the controversial nominations, and added that nominations should be handled by Elections Ontario and not the parties themselves.

Brown was also asked about his departure from the party leadership following a CTV story about allegations of sexual misconduct lodged by two women who had worked with Brown when he was an MP. Brown has consistently denied the allegations and is currently suing CTV, seeking  $8 million in damages. He said the blowback from the story was “horrifying.”

“I wouldn't wish false allegations on my worst enemy.”

“I wouldn't wish false allegations on my worst enemy,” he said. “It is gutting, it is horrifying. When that happened, I can't tell you the pain it caused my family and myself.”

The question on trust, published prior to the debate, that was to be put to Jeffrey, was instead addressed by the other candidates. In 2015 she made statements during the contentious debate on the provincially funded Main St. LRT route, suggesting, erroneously, that it was a precondition to securing a university in Brampton.

The day after the debate, Jeffrey, who had been recovering at home from her illness according to her campaign staff, sent the following written response to The Pointer's question on trust, but did not address the misleading comment she made in 2015.

“It became abundantly clear during our Blue Ribbon panel (put together by Jeffrey to land a university) interviews that additional transit was something all potential partners deemed to be absolutely critical in order to serve their current and future students,” Jeffrey stated Friday, in her emailed response to The Pointer. “Ultimately, Ryerson University chose a location right on top of our GO Station essentially confirming what I had predicted from the very beginning.”

During the Thursday debate, others vying for her job spared no opportunity to attack Jeffrey’s misleading comment from 2015 and her record on issues involving Brampton’s explosive growth, public safety, jobs, transit and development.

Regional Councillor John Sprovieri, jumping into the fray, added: “The public chooses the council and they have a right to express their views and express the views of the people, and those people want to be respected by the mayor. Because we are listening to the people's views here. When councillors speak, we are listening to the people's views. That's the problem with Linda Jeffrey, she did not have the respect that was needed to respect each member of council and their views, and that is poor leadership in my book.” 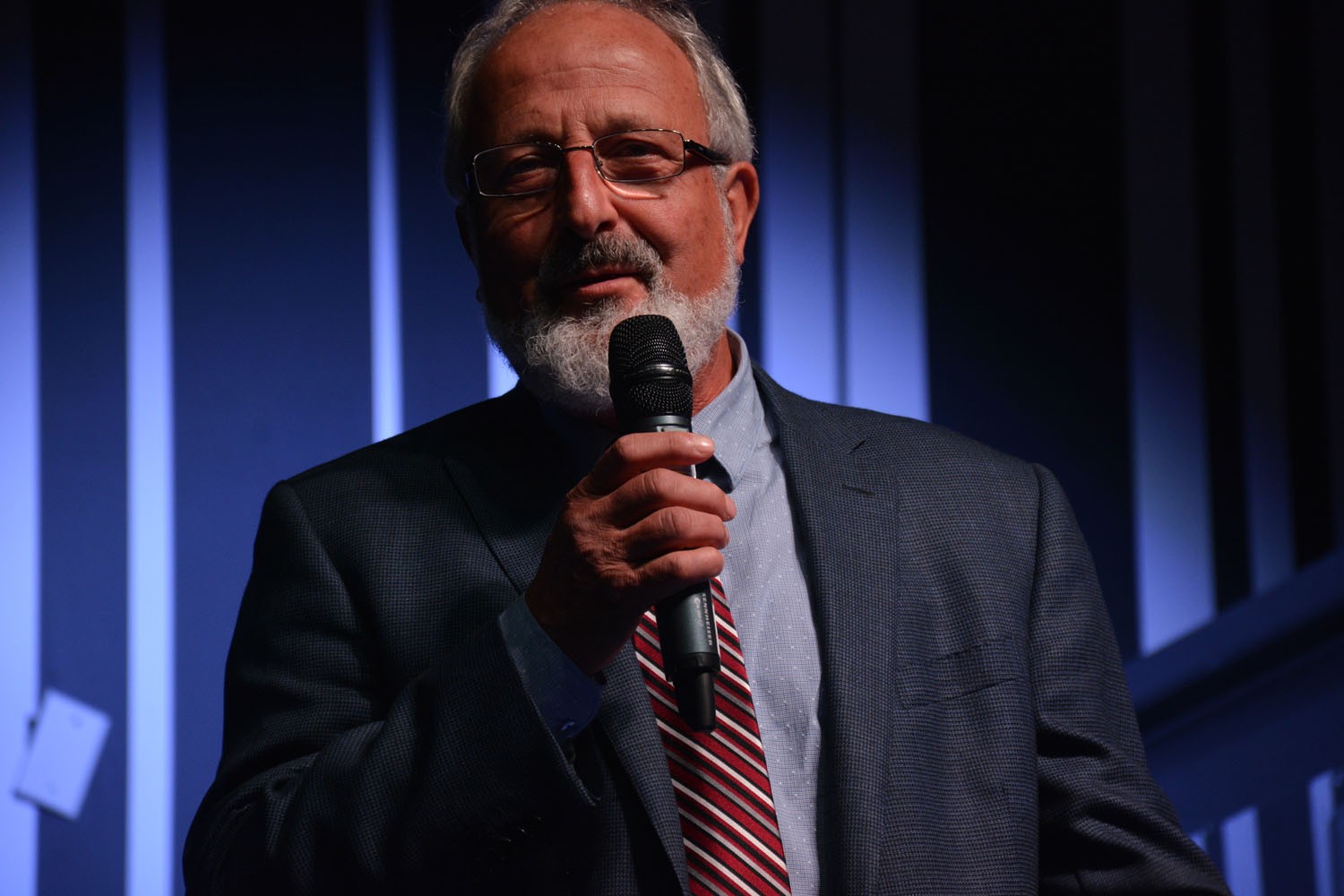 Jackson addressed the subject of Jeffrey’s misleading comments in 2015 about the LRT—that the provincially approved Main Street route was necessary if Brampton was to be awarded a university—with a dramatic flourish. “I truly believed that she believed it. I think she truly believed that the way to secure a university was to show that we had an LRT going to the university doorstep… . I don’t think it was a falsehood from her perspective. She was wrong (about her conclusion),” Jackson said.

Crime, which The Pointer’s commissioned-survey showed was at the top of the list of voters’ concerns (one point below high property taxes, as the biggest worry heading into the election) was an issue candidates were asked to address throughout the debate.

The summer saw a wave of violence in the city as armed bank robberies and shootings dominated local headlines. Public safety and rising crime has become a major issue in the campaign, with both Jeffrey and Brown releasing campaign pledges and community safety plans for how they will tackle the issue if elected.

Jeffrey spurred some movement on the issue when she introduced her Community Safety and Well-Being plan to the Peel Police Services Board, where it passed unanimously. The plan seeks money for social programs to curb crime as well as more officers for the Peel force.

Their two approaches to public safety have been a source of tension between Jeffrey and Brown. Thursday's debate set the stage for the the candidates to address the issue face-to-face, however, Jeffrey’s absence denied that opportunity.

The spate of violent crime has resurrected a hot-button issue: the use of police checks, or “carding” as it’s colloquially known, by Peel Regional Police. The tactic, which involves stopping people on the street to arbitrarily ask for identification in non-investigation situations, has been slammed by civil rights activists for unfairly targeting minority populations and curtailed by guidelines issued by the province in 2017.

In Peel, where about ten percent of the population was black, the force’s own data between 2009 and 2014 showed that on average almost 25 percent of those being carded were black.

Jeffrey, along with her Mississauga counterpart, Mayor Bonnie Crombie, led an effort to suspend the practice with a vote at the Peel Police Services Board asking Police Chief Jennifer Evans to stop using carding—which she subsequently refused to do. She was eventually forced to dramatically curtail the practice, which critics said infringed on Charter Rights, when the province brought in sweeping new guidelines that prevent racial profiling and targeting.

More recently, Evans has, without furnishing solid evidence, blamed the lack of her force’s ability to use carding as a reason for the increase in crime in the region.

Brown repeated that, if elected, he would not support the old form of carding that allowed "racial profiling". He mentioned his own community safety plan during the debate, and the task force he has formed to address the issue if elected, suggesting more of a focus on mental health issues and how police deal with mental illness crises. He said he’ll also push for extra resources for Peel police to deal with issues arising from the legalization of marijuana in October, which he warned will be a significant policing concern. He also said the force will utilize modern technology that will be properly funded, to fight increasingly sophisticated crime, under his leadership. Other candidates, particularly Jackson, emphasized this point.

The Pointer and its panelists also focused several debate questions on the candidates’ vision for Brampton’s future, particularly about its explosive growth, healthcare and economic development.

“Frankly, this is about Brampton, this is not about pleasing any political party.”

That raised a question for Brown, who some feel may have a strained relationship with Premier Doug Ford, who has been openly critical of the state in which Brown left the political party.

“Frankly, this is about Brampton, this is not about pleasing any political party,” Brown responded.

On the issue of growth and economic development, Brown and other candidates repeatedly criticized Jeffrey for failing to attract jobs to the city, while sprawling residential development continued under her watch.

In her post-debate response to The Pointer the next day, Jeffrey said, “I don’t expect my opponents to come out and cheer the many accomplishments that have been achieved over the past four years."

She lashed out at Sprovieri, Brown and Gosal, displaying the type of harsh tone candidates had expressed concern about the night before, when highlighting her inabilty to lead and work with colleagues. "In nearly thirty years one of my opponents has failed to accomplish anything more than to be reprimanded for his insensitivity to minority residents in Brampton," Jeffrey wrote in her response to The Pointer. "Another candidate spent most of his time in Barrie and has little connection to our community. His criticisms are of little consequence as he has only rented a place for a few weeks and will no doubt leave our community after October 22nd. The third candidate has spent more time travelling the world and has always focused more on Ottawa than Brampton. So while these candidates are willing to make outrageous promises they have no intention of keeping, I am the only candidate in the race that can realistically move Brampton forward.”

Brown addressed another frequently mentioned issue during the debate, regarding jobs, promising to aggressively market the city around the world to bring key employers in key sectors to Brampton, something he said Jeffrey has failed to do.